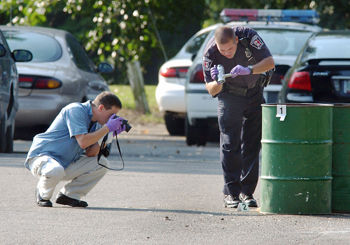 APD detective Doug Stanton and officer Rodney Hagerman photograph items at the scene of where a body was found Thursday morning in Edgewater Park in Anderson. 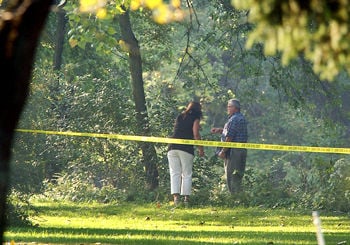 APD detective Doug Stanton and officer Rodney Hagerman photograph items at the scene of where a body was found Thursday morning in Edgewater Park in Anderson.

A body discovered in Edgewater Park this morning is that of a high school-age girl, according to Detective Joel Sandefur. Sandefur said police are treating the incident as a homicide investigation, but did not rule out an accident as the cause of death. Sandefur said that police have discovered an item of interest near the body, but would not disclose what it is. The body was found around 8:18 a.m. Thursday by someone in the park. The body was located halfway on the bank, and halfway in the White River, say police. Tom Dennis, who works at a landscaping company directly across the street from the park said that he saw a woman in an Isuzu Trooper speeding out of the park at around 8:15 a.m. Neighbors descrbed the E. 10th Street neighborhood where Edgewater is located as "quiet." "The neighborhood is pretty cool," said one neighbor who wished not be be identified. "But the park is especially weird." For more information on this story, see updates at www.theheraldbulletin.com and Friday’s The Herald Bulletin.