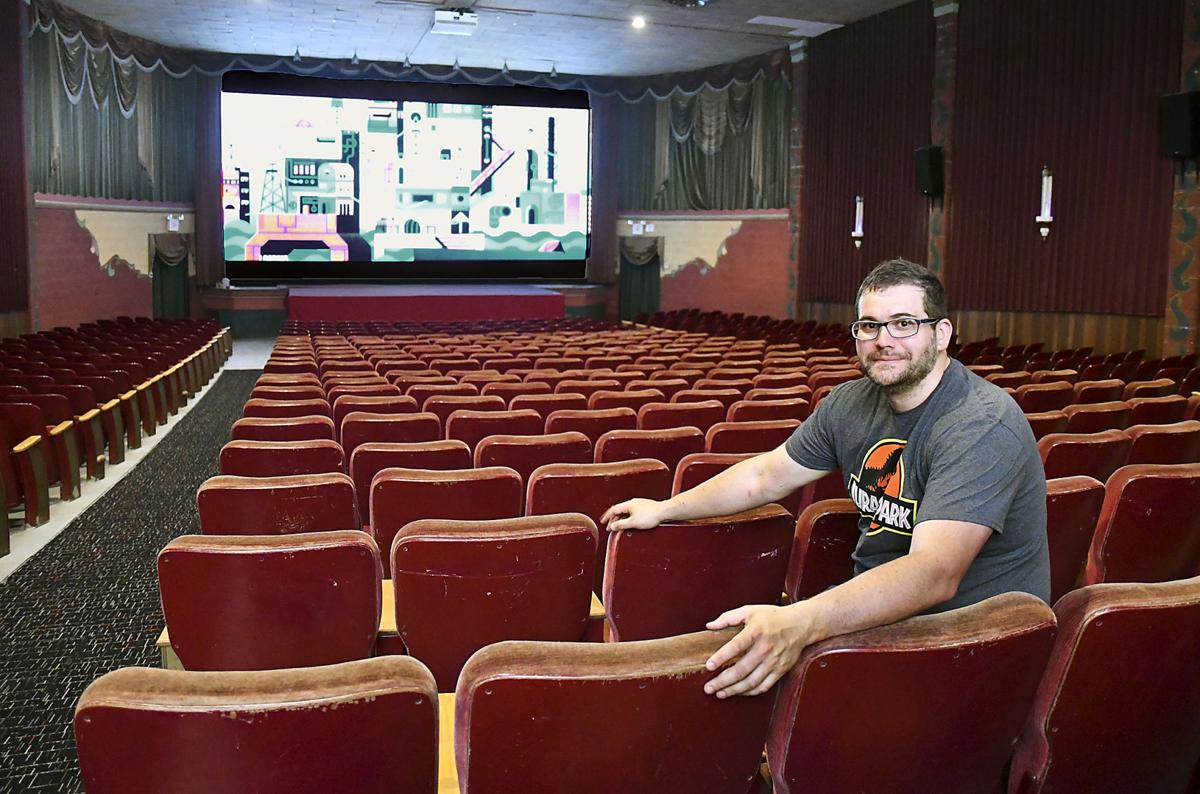 After purchasing the Alex Theatre at auction in February, owner Christian Harrison plans to expand its offerings, making it available to rent for birthday parties and other special occasions in addition to resuming bargain movie nights on the weekends. He said he also has the ability to hook up Microsoft Xboxes to the theater’s projector to be able to play video games on the big screen. 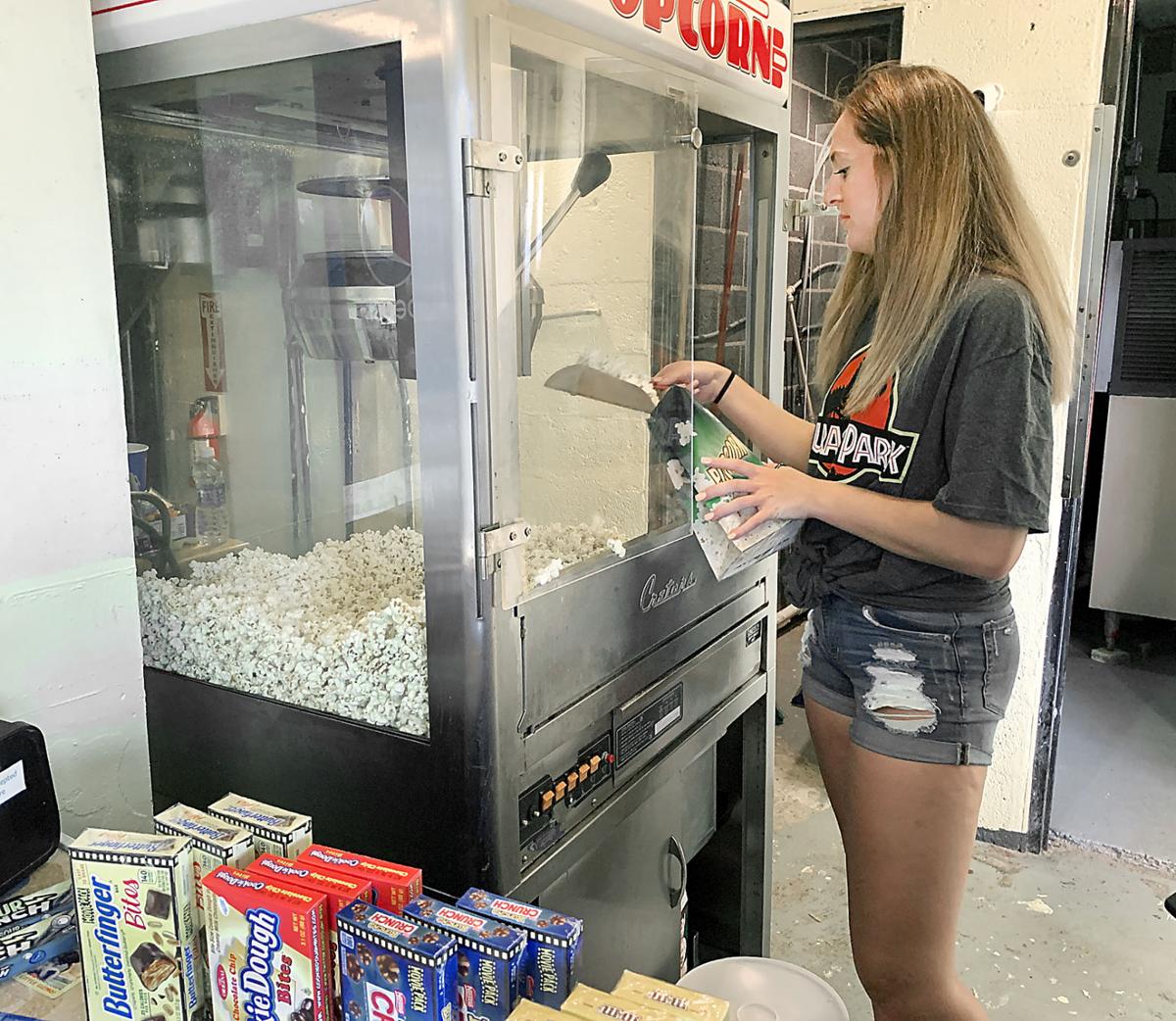 Maddy Schuyler, a senior at Alexandria-Monroe High School, prepares a bag of popcorn in the concession area of the Alex Theatre during an open house last week.

After purchasing the Alex Theatre at auction in February, owner Christian Harrison plans to expand its offerings, making it available to rent for birthday parties and other special occasions in addition to resuming bargain movie nights on the weekends. He said he also has the ability to hook up Microsoft Xboxes to the theater’s projector to be able to play video games on the big screen.

Maddy Schuyler, a senior at Alexandria-Monroe High School, prepares a bag of popcorn in the concession area of the Alex Theatre during an open house last week.

ALEXANDRIA — The new owner of the Alex Theatre realizes that reviving the downtown landmark and bringing first-run movies back to its big screen may not make him rich, but it presents a unique opportunity.

“Even if we don’t end up making money, but we break even, I’ll still consider that a success,” said Christian Harrison, who bought the theater building at 407 N. Harrison St. at auction in February and has spent most of the past four months doing renovations and repairs on the historic building. “We’ve got things for people to do and kids specifically to do. A lot of people are excited. We just need to get them in the door now.”

Enthusiasm for Harrison’s plans for the theater, which opened in 1950 and retains many of its original features, is evident among the town’s civic and economic development officials, who say the theater’s return to showing first-run movies and offering other entertainment options could spur a renewed “Main Street” vibe in the downtown area.

“Once you get a theater open, maybe you get a brew pub,” said Alan Moore, an economic development consultant working with the city on several projects. “People from the outside see businesses like that opening up and you see people coming downtown, you’re going to get investors who want to be in on other ventures.”

“I’m really excited about them staying in town and keeping this historical building running,” added Ashley Olibas, executive director of the Alexandria-Monroe Chamber of Commerce. “Our culture is going towards Main Street, going toward mom-and-pop shops, and that’s why with more malls closing, it’s easy to see how these ideas might be catching on.”

With a restaurant planned for the old Danner’s building and the owners of the Glove Corp. building negotiating to open a brewery, Olibas added that the components of a walkable entertainment district are close to becoming reality.

“There’s been at least four businesses going in in the past year, and that’s big,” she said. “They’re being really picky about who they’re considering, especially with the breweries. The only way we can go is up, really.”

In addition to bringing back first-run movies and $2 bargain movie nights that have been the theater’s trademark, Harrison plans to introduce some 21st century entertainment features. He intends to make the building available for rent during the week for birthday parties and other special events. The ability to hook Xboxes up to the theater’s projector — creating the novelty of video game play on the big screen — is expected to draw plenty of interest.

“The movie theater business needs to innovate, especially in smaller towns,” Harrison said. “There’s multiple things that could be done. What we want to do is we want to make sure that we’re keeping people entertained, and it doesn’t necessarily have to be just straight movies.”

Harrison said he also hopes the theater, which has been dormant for nearly two years, will soon be set up to host “escape theater” events, similar to escape rooms that have been popular for most of the last decade. Live events, including small concerts and comedy shows, are also being considered.

The atmosphere, Harrison said, should lend itself well to Alexandria’s efforts to revitalize its downtown with a new image.

“I think it’s very exciting to see all these new businesses pop in,” he said. “Really, they’re going to complement each other, because someone might come for a movie and they might see a place downtown that they can go eat later — and vice versa.

“It’s really exciting just to kind of get people traveling through Alexandria to get them acquainted with the town.”

The Alex Theatre’s opening weekend begins Friday night with a double feature. “Abominable” will be shown at 6:30 p.m. followed by “Dolittle” at 8:30 p.m.

On Saturday, four screenings will be available:

Owner Christian Harrison said the theater will begin its schedule of first-run movies on July 24 with a showing of “Mulan.”

Online ticket purchasing for all movies is available at www.alexmovietheatre.com. For more information, call 765-620-9093.