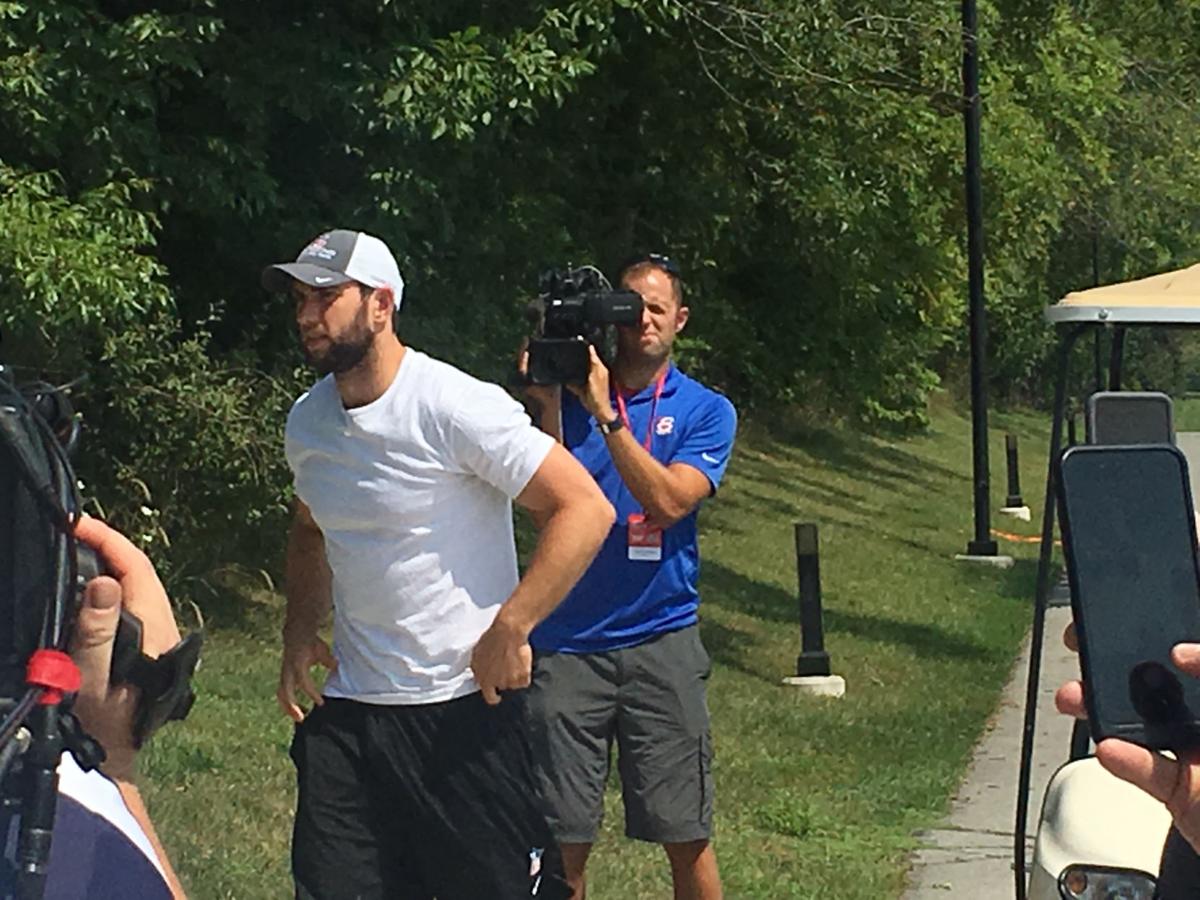 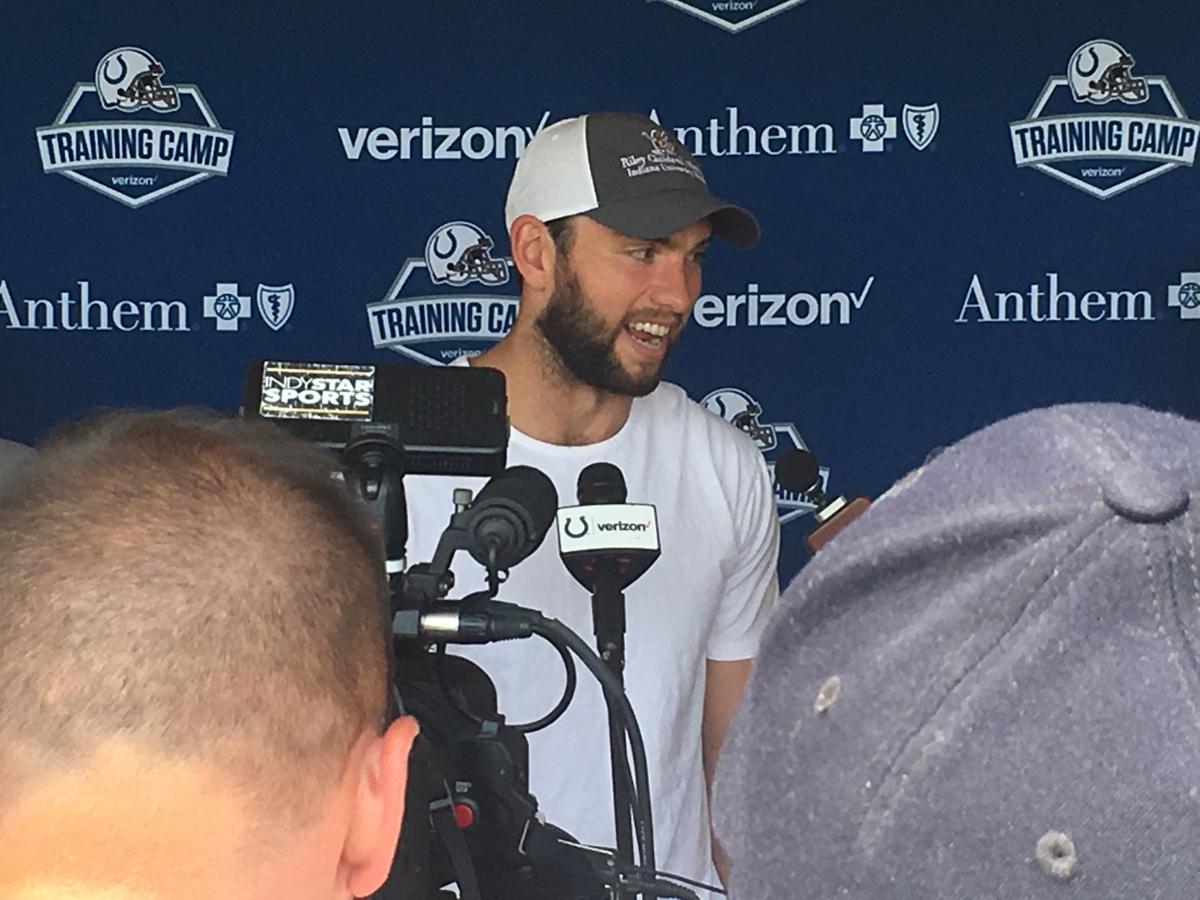 Colts quarterback Andrew Luck speaks with the media Wednesday at Grand Park Sports Campus after he reported for training camp.

Colts quarterback Andrew Luck speaks with the media Wednesday at Grand Park Sports Campus after he reported for training camp.

WESTFIELD — Andrew Luck has a particular set of skills.

And his Colts teammates can't wait to see him display them on the field again.

As expected, the 28-year-old quarterback was the talk of training camp as players reported to Grand Park Sports Campus on Wednesday.

“I almost picture in my mind Liam Neeson in 'Taken,' when he’s like, ‘I’m a man of singular focus,’" left tackle Anthony Castonzo said, describing the quarterback's mindset. "Andrew’s focus is so narrow right now on having the best season he possibly can. He’s definitely ready to go. Mentally prepared.”

Castonzo is one of Luck's closest friends on the team.

Others will be playing with the three-time Pro Bowler for the first time when practice begins Thursday.

Al Woods played against Luck twice a year as a member of the Titans from 2014-16 and never beat him.

The burly defensive tackle was anxious to see the rivalry from the other side after signing with Indianapolis last year. But Luck never took a regular-season snap.

“It means a lot (to have Luck back)," Woods said. "The guy busted his tail to come back. I’m excited. I never played with the guy. I played against him. He was always a menace to play against. But now that I’m on his side, I’m excited to see what he can do.”

Nobody is more excited than Luck himself.

He was the final player to speak to the media on report day, and he made no attempt to hide his exuberance.

Luck talked about organizing playground games made up of "Swedish and English" kids and teaching them American football — the game his dad, Oliver, played — while an elementary school student in Germany.

Then he marveled at the opportunity he still has to play a child's game.

That opportunity means more to Luck after a season on the sideline. His right shoulder saga has been well-chronicled, and it seems the time is finally approaching to put the injury in the past.

Luck looks as though he might be in the best physical shape of his career. And the pain that caused him to shut down a comeback attempt last October is a distant memory.

Luck mentioned regaining a feel in the pocket, adjusting to the tempo of live play and taking his first hit as some of the many things remaining on his to-do list.

Those items will begin to be checked off with a regular training camp schedule that is designed to mimic his in-season workload. Luck won't throw every day — Saturday will be a day off, for instance — but on the days he does throw, there will be no restrictions.

New head coach Frank Reich said that process likely will include an appearance in the preseason opener Aug. 9 at Seattle. But the quarterback's exact workload for the exhibition schedule is still being determined.

“I can tell you this about the preseason, we’ll see as we get there," Reich said. "But here’s what we have determined, I don’t feel like we have to overreact and say he’s got to play a ton more. He’s logged a lot of game reps in his career. So we still want to be smart.

"Yes, he has to get reps in preseason games. But we’re not gonna go over-the-top and overreact to try to get a quantity of reps. It’ll be a more feel thing as we go, and we’ll have a plan in place and then adjust as we go.”

Back to that particular set of skills. It's no joke.

Luck does things at the line of scrimmage others simply aren't capable of accomplishing.

He literally makes the team better just by being there.

“Just the way that he commands the offense and just little nuance things that he sees that I’m not sure there’s anybody who can really see those things," Castonzo said. "On the O-line, we certainly don’t see some of the things that he sees. So he’s always got us in the right position. I mean, physically, obviously he’s incredibly gifted. But it’s those little nuance things or just the way he understands the game that really change the playing field out there.”

Just don't expect Luck to be looking for a participation trophy.

He's well aware of the excitement surrounding his return, and he's as hyped as anybody about returning to battle with his teammates.

But just showing up isn't enough.

As always, he's got a plan for the preseason.

And he's going to follow it day by day.

“There are no awards for just walking out on the field," Luck said. "To me, it’s about getting better every day. That’s part objective, part subjective. And, at the end of the day, really that’s the question for me to answer for myself.”