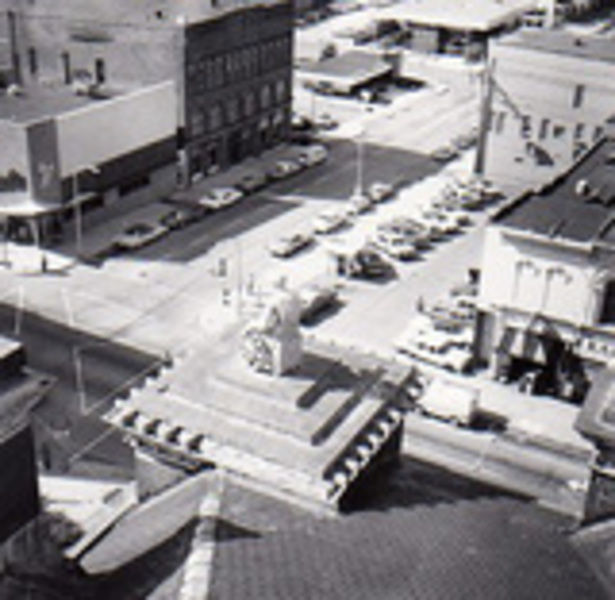 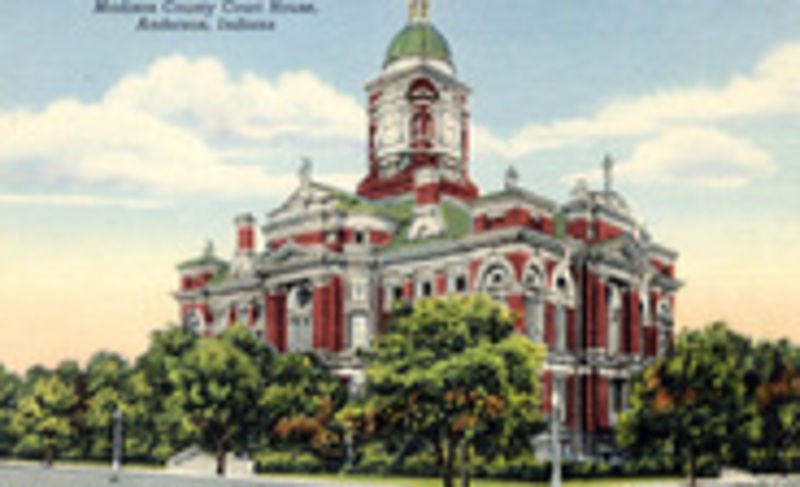 ANDERSON — Madison County has had four courthouses located on courthouse square in Anderson. An 1820s frame structure was replaced soon afterward by a two-story brick building with a cupola. The brick courthouse served the county for about 40 years before it was destroyed by fire in the early morning of December 10, 1880. (A transient man was suspected of setting the fire, but no one was ever tried for the crime.)

In 1882, the cornerstone for the new Madison County courthouse, an Italianate limestone building, was placed and by 1884 the building was complete.

This is the courthouse that most Madison County residents over 45 remember. It was imposing and graceful. It looked the most important building in the county. It had well-kept grounds graced by Civil War cannons. In the clock tower, a courthouse bell hung to toll the hours. The building was decorated with ornamental cornices and from the four corners of the roof four stern yet lovely ladies looked down on Madison County. Dressed in flowing robes with Grecian hair styles and impassive faces, each grasped a wheel in one hand. The wheel was a modern gear wheel and symbolized Progress.

The statues were original to the building and were probably set on the roof in 1884. The specifications of the building call for the statuary to be made of zinc and held in place with wrought iron stays. The statues themselves are not mentioned in the specifications otherwise, but the original drawing of the courthouse clearly shows them placed on the four corners of the courthouse roof.

Fast-forward in time to the early 1970s. The courthouse which had seemed so imposing in the 1880s had been outgrown by a busy Madison County. Plans for a new Madison County courthouse, to be opened the year of Madison County’s 150th birthday, were in place. Demolition for the beloved old courthouse was set. Giving up the old building was a hard decision. It was hoped that some of the features of the old courthouse could be saved. The courthouse bell and the four roof statues were scheduled to be salvaged. The contractor was to remove them from the roof. Cables were attached to the four ladies of the courthouse and they were given a very modern ride to the ground after nearly 90 years of observing Madison County from on high.

Once on the ground, the statues and the bell were taken to the Madison County highway department garage. Unfortunately, the statues were not in very good condition. Although they looked like carved stone or even concrete from far away, the statues were made of wood with a metal overlay. They were badly rusted with rough holes in the metal. The one in the best condition was loaned by the county to the Anderson Center for the Arts (then called the Anderson Fine Arts Center) and the rest were kept outside a storage shed at the County garage. It was decided that the statues and the courthouse bell would be sold at auction.

As it turned out, none of them were. The 2,500-pound courthouse bell was cleaned and its wooden yoke was rebuilt by the McShane Bell Company of Baltimore, Md. It was then reused in the new courthouse. The statues, after consideration, were withdrawn from the auction. They were in such bad condition that were deemed not worth selling. Other courthouse memorabilia — including 20 long benches from the old Circuit Court — were sold on December 29, 1972 for a total of $8,000.

The statue on loan to the Fine Arts Center remained on the Alford House grounds for a few years in the 1970s. After a while, it too was returned to the county. The statue had sharp edges and holes in the metal and was a danger to children who, as children will do, tried to climb it.

If you enjoy Anderson and Madison County history and if you are a Facebook user, you owe it to yourself to check out two pages: “If you grew up in Anderson, IN” and “Anderson/Madison County history.” If you “like” these pages, you can join in the discussions of local history and organizations and see the pictures that are posted there. Page managers Darwin Teague and Jack J. Grant do a wonderful job of keeping the pages free of irrelevant posts and share wonderful pictures of the local area. The courthouse statues have been under discussion by the Anderson/Madison County history page this week and I wish to thank everyone who contributed, especially to Jack J. Grant and Dick Kreegar for pictures.

Beth Oljace works in the Indiana Room at the Anderson Public Library. She can be reached at boljace@yahoo.com.