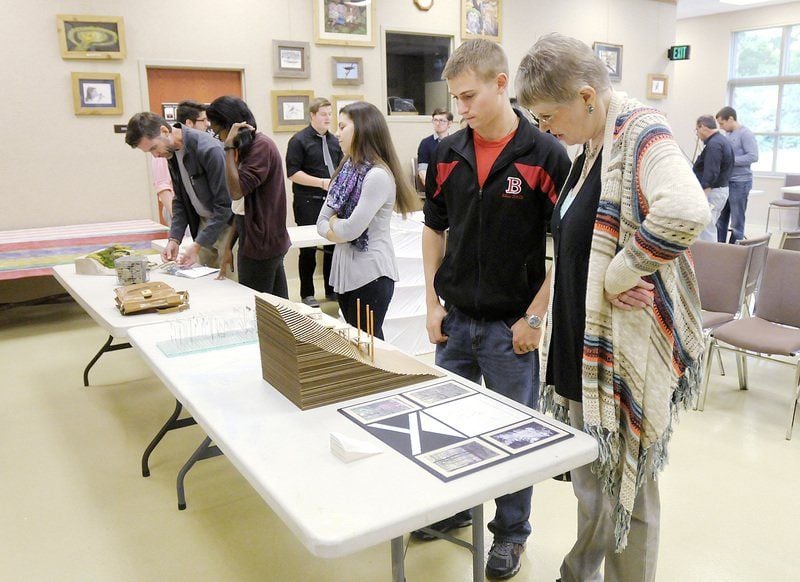 Ryan Heitkamp explains his idea for a series of terraced decks overlooking the White River to Becky Clemens as Ball State architecture students present their concepts for Mounds State Park at the park's nature center on Oct. 3. 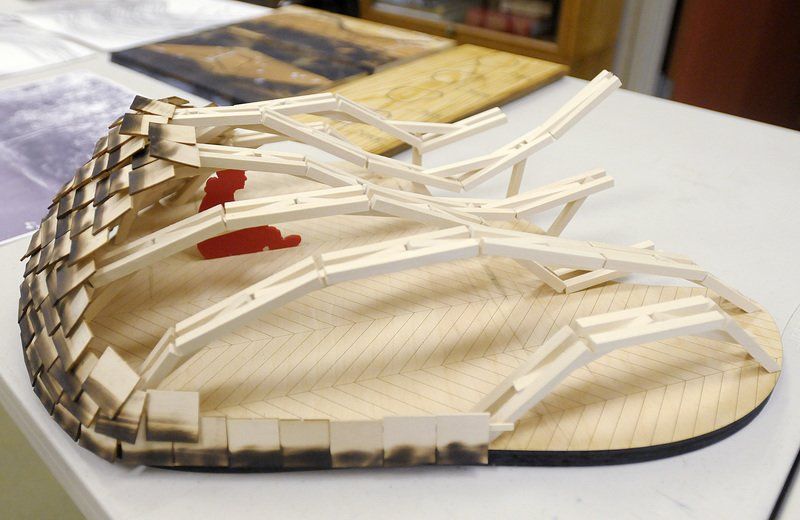 Ball State architecture student envisioned this meditation pavilion designed to be built on a sand bar in the White River. 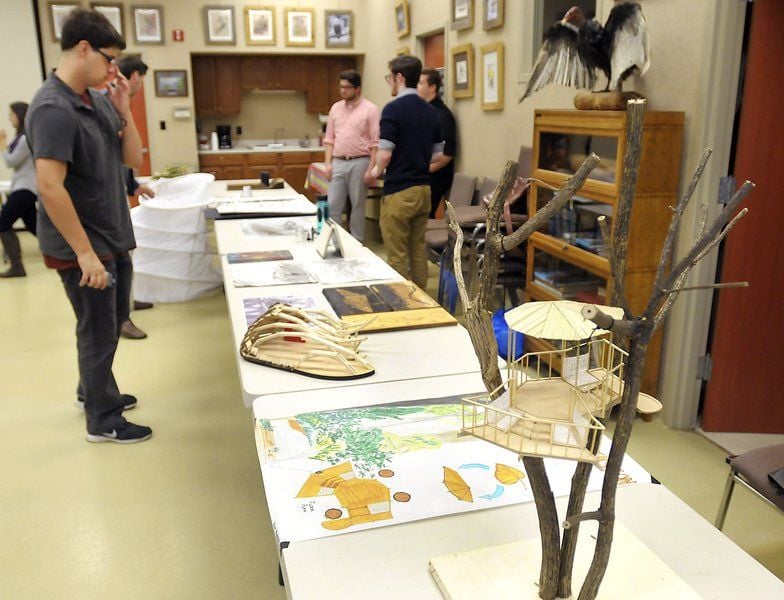 Ryan Heitkamp explains his idea for a series of terraced decks overlooking the White River to Becky Clemens as Ball State architecture students present their concepts for Mounds State Park at the park's nature center on Oct. 3.

Ball State architecture student envisioned this meditation pavilion designed to be built on a sand bar in the White River.

ANDERSON — In the study and practice of architecture these days, nearly every design begins and ends with a computer.

It wasn't always that way, of course.

Before the advent of personal computers and CAD (computer assisted design) programs, conceptual designs began with drawings using pens, pencils, paint and brushes before they were rendered as blueprints and construction drawings.

As part of a six-week project to create dwellings at Mounds State Park, 15 Ball State University architectural design students recently were specifically directed to abandon technology. The results of their work were on display at the park's nature center recently.

The students each spent about a week investigating the park, and then used their experience and observations to design and build scale model meditation spaces, platforms and tree houses to fit the natural surroundings of the park.

"We were told not to use computers, which is weird," said class member Emily Maurer. "A lot of us were terrified."

"It forced us not to have the crutch of technology," she said. "At some point in our careers we're going to have to have the knowledge to come up with something on our own," she added.

George Elvin, the associate professor of architecture and planning who imposed the no-technology rule, said he was pleased with the results.

"I think in many ways these projects were more creative because sometimes our use of technology can dictate the outcome of our work," Elvin said.

Ryan Heitkamp's project involved building a series of platforms on a park hillside, each of which would offer an entirely different view of the White River and other park areas, based upon photographs at each spot where a platform would be placed.

"As you climb the hill, there are very different views"  said Heitkamp, who described his project as a combination of landscape and structural design.

A trio of stout cottonwood trees near the park's boat landing supplied inspiration for a tree house designed by Wesley Wisehart that would be 30-40 feet off the ground and accessible by ladder.

"I wanted to design something tucked away, but which provided good views," he said.

The structure would have three platforms on slightly different levels, covered with a bamboo latticed roof for sun and rain protection.

"I wanted this to be a kind of shelter house where you could even set up a sleeping bag if you wanted," Wisehart added.

One of the more unique designs is a nomadic meditation hut created by class member Jimmy Darling. He researched yerts, small dwellings generally associated with Central Asian nomadic groups, and teepees that were primarily used by Native Americans of the Great Plains.

Darling said the idea of the portable structure is to find a desired place to meditate, which might change from day to day.

"I wanted them to evoke the spirit of the place, which is something they don't get as a rule," Elvin said of his students' projects. As a result, "I think the outcomes were more unique than they often are with this kind of project."