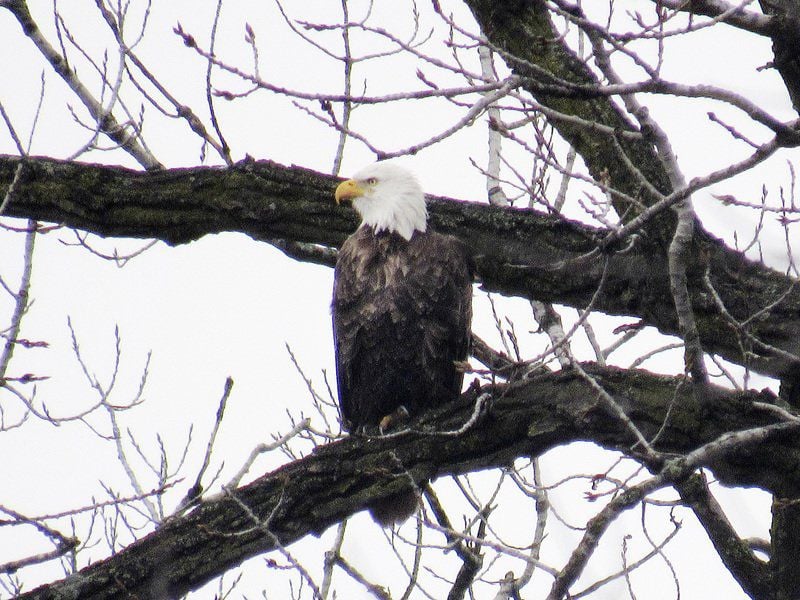 Kelly de la Bastide | For The Herald BulletinA bald eagle blends with the landscape more on a cloudy day. A 70-mile tour near Alton, Ill., provides many opportunities to see the national bird. 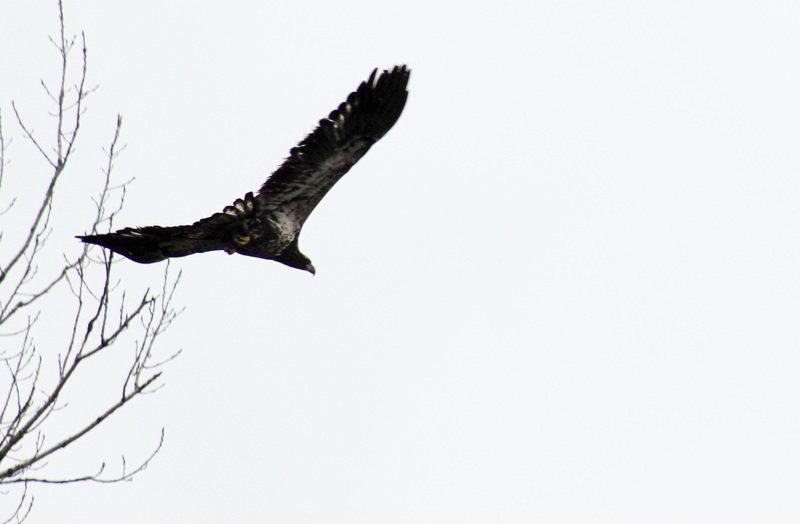 Kelly de la Bastide | For The Herald BulletinA bald eagle blends with the landscape more on a cloudy day. A 70-mile tour near Alton, Ill., provides many opportunities to see the national bird.

ALTON, Ill. — It used to be a rare sight to catch a glimpse of a bald eagle in the wild and although the numbers are increasing, it’s not an everyday occurrence in the Midwest.

Over the years, we have observed bald eagles in the wild in New York and Michigan, and I know there are sightings in Indiana.

But one of the biggest congregations of the national bird takes place every winter where the Illinois and Missouri rivers flow into the Mississippi River from Alton, Ill., north to Quincy.

The reason is simple, in a normal winter when the river ices over the barge traffic and locks along the Mississippi River affords water fowl, not just bald eagles, the opportunity to hunt for their favorite food — fish.

Local communities along the stretch of the river to the east of St. Louis host Eagle Days from January through March with lots of opportunities to witness these magnificent birds at close range.

Spotting a bald eagle can be difficult, but the Illinois Department of Natural Resources makes a guided tour available to the public at no charge.

Guide Scott Isringhausen took the group to several locations along the Illinois River, affording the opportunity to observe and photograph about 20 bald eagles.

Although everyone in our group was thrilled with the number of bald eagles we observed, Isringhausen felt bad because we didn’t get the opportunity to see more.

Bald eagles can also be observed at the Audubon Center and the National Great Rivers Museum, both in Alton.

Eagles aren't the only tourist attraction in the Alton area.

Not far away is where Lewis and Clark started their exploration of the West, where the camp has been recreated. Alton is also the site of the last debate between Abraham Lincoln and Steven Douglas and a monument to Elijah Lovejoy, a newspaper editor who died for the abolitionist movement prior to the Civil War.

There are a number of restaurants and antique shops along the Mississippi River in Alton.

We had a pork tenderloin sandwich at Johnson’s Corner, which has been a specialty of the restaurant since the 1970s, and dined at the Bare Foot Restaurant in Hardin, where lunch was a meal.

The Great Rivers driving tour extends from Hartford to the Pere Marquette State Park, following the river for many miles and passing through interesting small towns like Grafton and Elsah.

To watch the bald eagles in flight and at close range is worth the journey.

• Travel time: It’s about a five-hour drive from Anderson to Alton, Ill., and is reached by taking Interstate 70 west to I-255 North.

Visit www.baldeagleinfo.com/eagle/directory/IN.html to see postings where people have spotted bald eagles in Indiana.