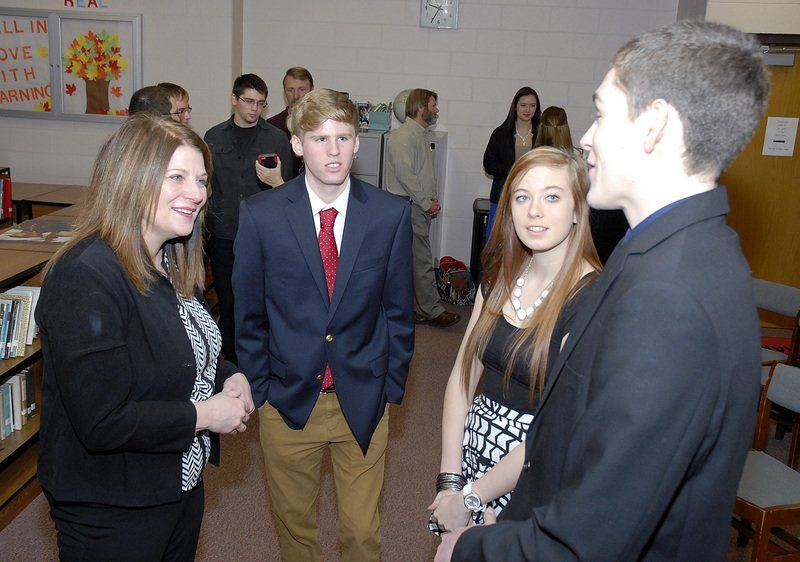 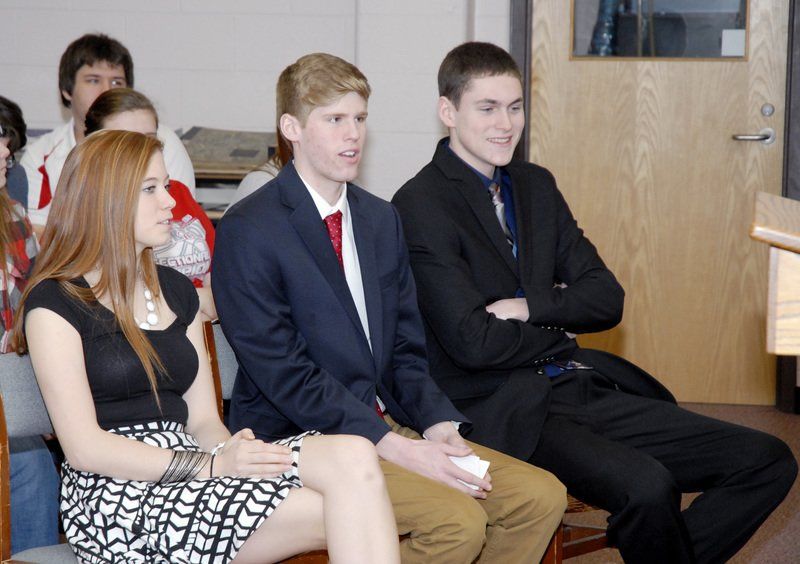 Tarah Collins, left, Nate Gollmer and Jacob Whatley listen as they are introduced during a ceremony praising them for honorable mention award in an education program sponsored by C-Span.

Tarah Collins, left, Nate Gollmer and Jacob Whatley listen as they are introduced during a ceremony praising them for honorable mention award in an education program sponsored by C-Span.

FRANKTON — While the Frankton boys basketball team was honored Friday for achievements in basketball as they prepared for regional, other students were recognized for their academic prowess.

Chellie Zou, a marketing representative from C-SPAN, was on hand at the school Friday to present the award, along with state Reps. Terri Austin and Melanie Wright, and Kevin Sulc from U.S. Rep. Susan Brooks' Anderson district office.

Contestants were asked to address a national policy issue in a five- to seven-minute documentary video, demonstrating how a policy, law or action by either the executive, legislative or judicial branch has affected their community.

Gollmer, Collins and Whatley's winning video is called "Eminent Domain: Mounds Lake" and can be found on YouTube.

"Going into the project, I think we all had our minds set on how we felt about the issue," said Gollmer.

The students said they generally favored the project, but after recording five hours of interviews with Mounds Lake supporters as well as home and business owners who might be displaced, they got another perspective.

Home and business owners would have a difficult time getting back on their feet, the students now believe.

"And not a whole lot of people realize how long this project is going to take," Gollmer added. "It would rip up an entire part of Anderson ... and there's no guarantee that it's actually going to work. I feel like my viewpoint changed a little bit when when I actually spoke to those people."

Collins said she was impressed that opponents have proposed an alternative to the reservoir.

"I feel like a lot of groups that are against certain projects such as the Mounds Lake project are just against it and don't propose anything else in its place," she said.

That alternative is a trail system that would connect with the Cardinals Greenway in Muncie and Indianapolis' Monon Trail.

While such a project may not carry the investment and profit potential of a reservoir, Collins nevertheless believes it would attract bicyclists to Anderson from all over the country.

"I was just impressed they had an alternative, and one that made sense." she said.

The Madison County Corporation for Economic Development two years ago proposed building a 2,100-acre reservoir that would extend from the Irondale neighborhood in Anderson almost to Yorktown. The intent of the project is to help meet Indianapolis' water needs in the future.

The project has an estimated cost of $440 million. Two feasibility studies have been completed, the last with a $600,000 state grant.

Local and statewide environmental groups have opposed the project, since its inception, citing a myriad of concerns, one of which is that about 400 home and business owners would be displaced.

Elected officials from Madison and Delaware counties, Anderson, Chesterfield, Daleville and Yorktown are in the beginning stages of creating a regional commission to oversee the project.

All of the students in Kline's class worked on similar group projects, delving into such difficult topics as HIPPA (Health Insurance Portability and Accountability Act), affirmative action, the Affordable Care Act, No Child Left Behind education issues, and Burwell v. Hobby Lobby, a landmark 2014 decision by the U.S. Supreme Court that exempts privately held for-profit corporations from certain laws if the owners have religious objections.

More than 2,200 student videos were submitted.

The documentary shorts were judged by a panel of C-SPAN educational representatives on whether the shorts included thoughtful examination of theme, quality, inclusion of differing perspectives and effective inclusion of C-SPAN programming.

The Frankton seniors were three of the 347 winning students from 45 participating states.

You can watch the video at http://www.viddler.com/v/b54698f5 or find the link at heraldbulletin.com.