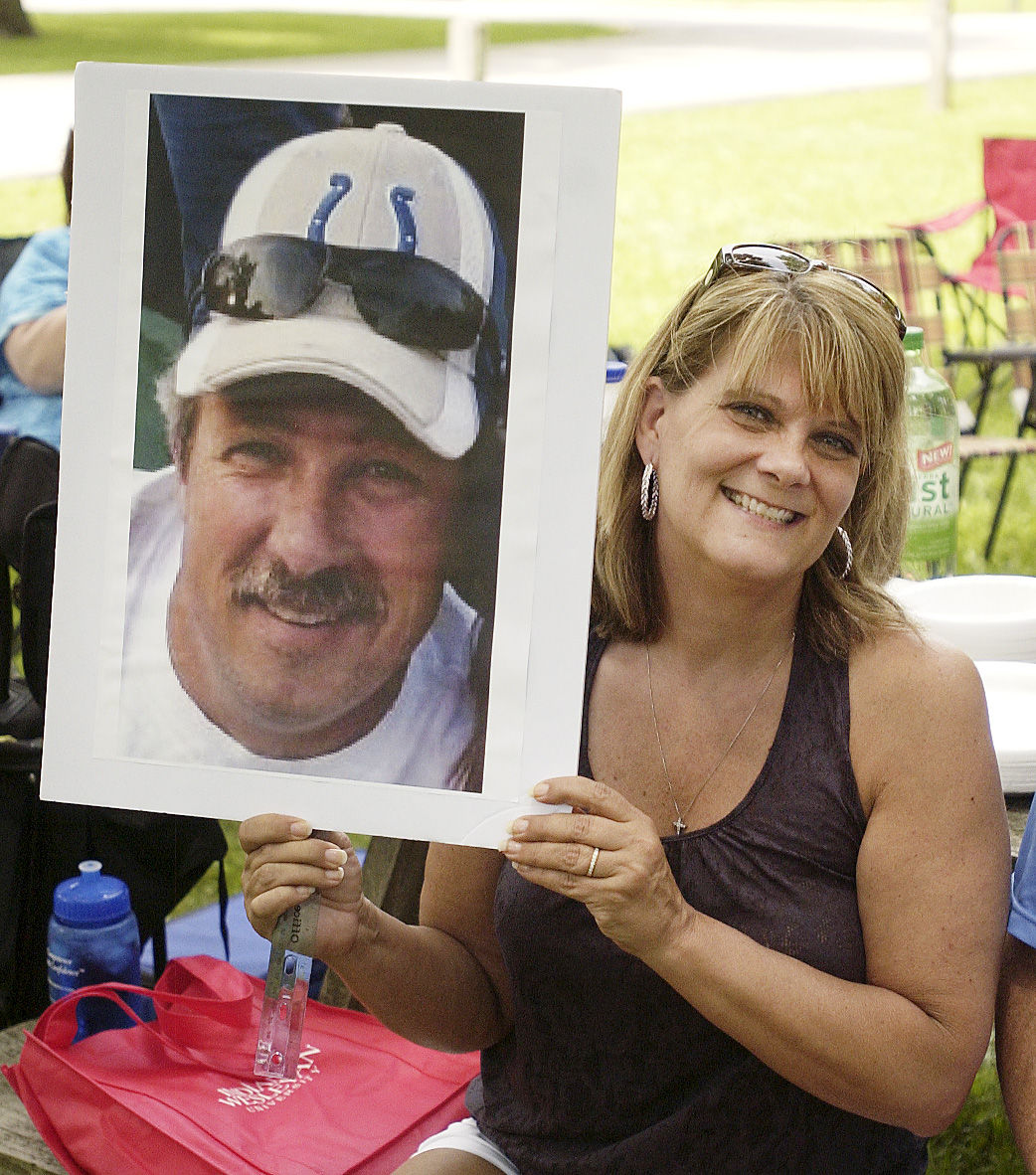 Shelly Boggs Harvey brought a picture of her husband Tim Harvey who is serving in Iraq to the Highland Class of '79 reunion and birthday party at Mounds State Park on Saturday. Shelly and Tim are both members of the Class of '79. 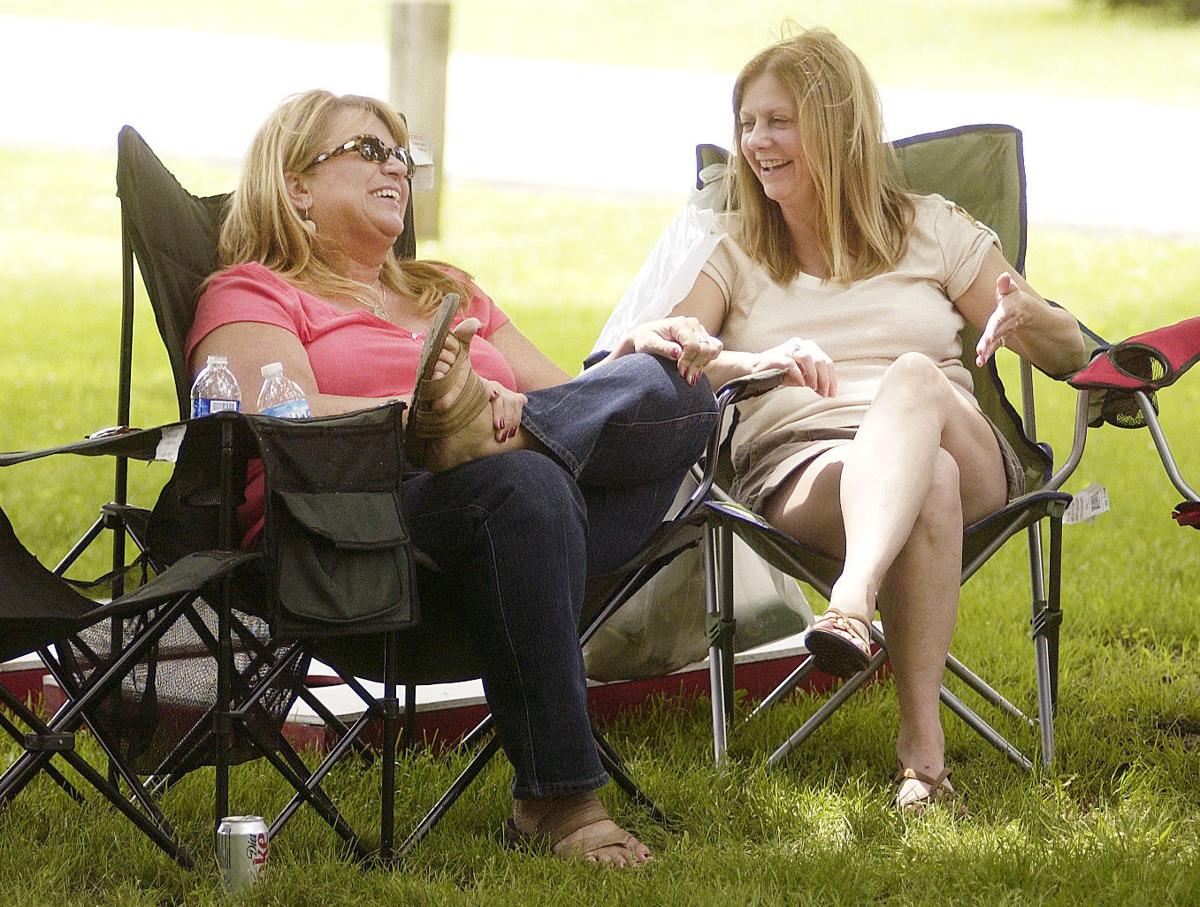 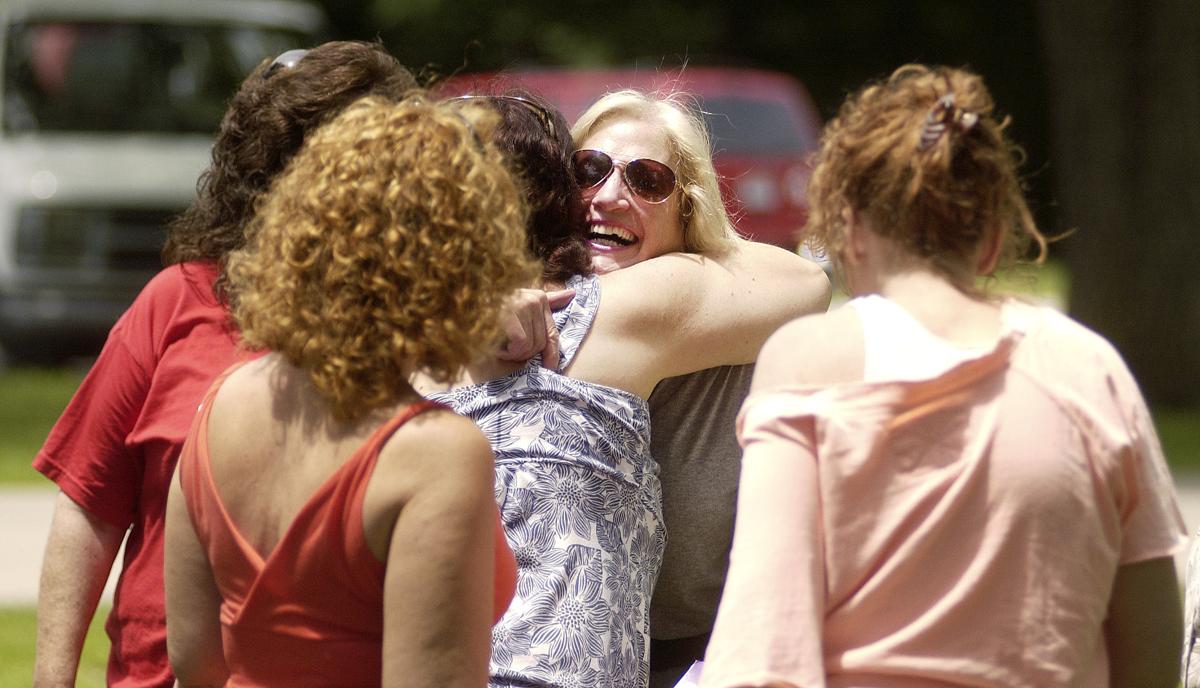 Vicki Fetz receives a warm welcome from her classmates as she arrives for the Highland Class of '79 reunion and birthday party at Mounds State Park on Saturday.

Shelly Boggs Harvey brought a picture of her husband Tim Harvey who is serving in Iraq to the Highland Class of '79 reunion and birthday party at Mounds State Park on Saturday. Shelly and Tim are both members of the Class of '79.

Vicki Fetz receives a warm welcome from her classmates as she arrives for the Highland Class of '79 reunion and birthday party at Mounds State Park on Saturday.

Every five years isn’t enough for Claire Bridgewater Strayer and her Highland High class of 1979 classmates.

The class is a close one and the alumni have made a point to get together between reunions but wanted to do something extra special for their 50th birthdays. A picnic and REO Speedwagon concert seemed like the perfect fit.

“For me, it is important to be rooted and connected,” Strayer said. “We are all so blessed to have these great connections in life so we wanted to get together and celebrate that.”

About 40 of the classmates gathered at Mounds State Park on Saturday afternoon for the class birthday bash and nearly 30 of them had gotten tickets together to see the concert later that night at Hoosier Park Racing & Casino.

Sheila Shoopman Van Allen, of Lawrence, said she was ecstatic to hear about Saturday’s gathering.

“It’s the big 50,” she said of the birthday with a smile. “That is one big reason I wanted to celebrate. And it is so nice to stay connected. It is easy to lose touch, but this is a good excuse for us to get back together and reminisce.”

Van Allen said the past year has been a tough one — just two months after she and her husband moved to New York her husband died — so getting reconnected with old friends held even more importance to her.

“I needed this bright spot and to be with such good friends,” she said. “We have known each other for so long — some of us since grade school — and know each other so well. It is nice to see what has been going on for all these years and relive old memories.”

And the REO concert will be a first for Van Allen.

“My parents never let me go to things like that,” she said, laughing. “I really loved REO in high school so this should be a lot of fun.”

Strayer and Becky Hollon — the class treasurer and secretary respectively — are the planning partners for all of the class get-togethers. In addition to their reunions, the duo have tried to come up with other fun events they can do together like the cruise 24 of the classmates took in April and Saturday’s get-together and concert.

“We want to get together as much as possible,” Hollon, of Anderson, said. “Facebook has been a great way to keep up with each other and get word out about these events.”

That’s how Dave Girt got involved. The Anderson man hadn’t been to a single class function since his five-year reunion and said he hadn’t seen many of his classmates for 30 years. He joined the social networking website a few months ago and saw many old friends from high school and saw pictures from their previous gatherings and wanted to find out more.

“The pictures looked like they were having so much fun,” Girt said. “Obviously we are one of the closest classes since so many of us have stayed in touch. It made me sad that I’d missed out on the last 30 years.”

Saturday’s birthday get-together was a great time, he said, with “a lot of laughter.” The best story, Girt joked, probably wasn’t suited for publication.

“I came thinking I’d just come by for five minutes and leave but I’ve been here for hours,” he said. “I’ve had a lot of catching up to do.”