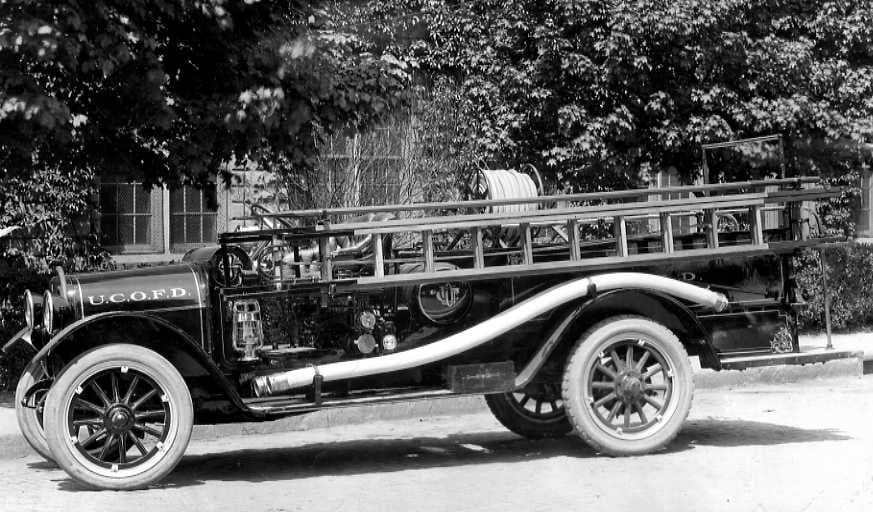 A triple combination Howe pumper with an open cab is shown in this undated photograph.

In 1970, the Howe Fire Apparatus plant was located at 2215 N. Madison Avenue in Anderson.

A triple combination Howe pumper with an open cab is shown in this undated photograph.

In 1970, the Howe Fire Apparatus plant was located at 2215 N. Madison Avenue in Anderson.

The year 1871 was a disastrous year for fires in the United States.

On Oct. 8, 1871, the Great Chicago Fire destroyed more than three square miles of the city’s north lakefront, killed hundreds of people and leaving a third of the city homeless. On the same day, three cities in Michigan — Manistee, Holland and Port Huron — also suffered huge fires.

The fifth fire that day was the most devastating of all. A firestorm ignited the drought-plagued country around Peshtigo, Wis., burned more than 1 million acres and killed more than 1,000 people. Americans were more than aware of the dangers of fire. It was a good time for B.J.C. Howe to start his business.

B.J.C. Howe had perfected and patented a piston pump fire wagon, the first of its kind, and he began to sell it in 1872. The pump could be operated by a team of 20 men or by the team of horses that had drawn it to the fire. It was a highly efficient water thrower. The design of the pump was so good that versions of it were still being made and used 100 years later.

Howe Fire Apparatus located first in Indianapolis and spent nearly 50 years there. The Howe family’s country home served as the business’ test kitchen. Frequently, new pump units would be tried out on the grounds. (Mrs. Howe must have been a tolerant woman.) The family also maintained a good relationship with the city by servicing its equipment for them. Before summer holidays, one of the Howe sons would visit all the horse-watering troughs in the city to make sure that the well pumps were in working condition. He would also visit fire departments throughout central Indiana to make sure that their Howe pumpers were working properly.

Howe’s product line was always expanding to embrace new technology. The hand- or horse-powered pumps were eclipsed by a gasoline-operated “Baroda” pumper which was very popular. The Baroda pump could be drawn by horses or fastened to the back of a truck or car. Howe began experimenting with automobiles equipped with pumps in 1904 and delivered its first unit in 1908. These were considered a novelty by most fire companies, which continued to prefer the Baroda pump, until 1914.

It was the growing need to produce automobile fire trucks that brought Howe to Anderson. The company moved in 1917 to manufacture a fire vehicle on a Lambert chassis built by the Buckeye Manufacturing Company. When John Lambert closed out the Buckeye business in 1922, Howe found quarters in North Anderson on Silver Street (near the current Historical Military Museum location.) The company stayed there for 14 years, when they were, ironically, burned out. A pot-bellied stove in the garage caught fire and destroyed the offices, two trucks under construction and the car of a visiting insurance underwriter. The company re-constructed the two new trucks quickly and made the deadline on their order. They then moved to the West 22nd Street factory vacated by the Hill-Standard Company. In 1970, a new factory on North Madison Avenue was built, modernizing the entire Howe operation.

One of the first things that Howe did upon moving to Anderson was go into war production. They created motorized pumper trucks that could be used by the Army to protect Army camps. The U. S. government bought 163 during World War I and a further 979 during World War II to serve as military base fire protection. After World War II, Howe began experimenting with a Jeep body and created a line of smaller fire vehicles.

Howe Fire was a four-generation family business. B. J. C. Howe retired from the business in the early 1890s and left it to his three sons, who ran operations until the Depression. The sons of L.M. Howe managed the company into the ‘40s. One of them remained as chairman of the board until the 1970s and his sons were president and plant superintendent.

A Howe fire truck was custom built to serve the needs of the community purchasing. Howe trucks were efficient and dependable and the company had many repeat customers. In 1930, the company received a letter from an Ohio community. The town had replaced its Howe equipment with a vehicle from another manufacturer. The new truck was “very unsatisfactory in all respects.”

The community wondered if Howe would be willing to take the vehicle in trade and provide them with a good Howe product.

Howe’s typical market was the small- to medium-sized community and private fire operations like those mounted by airports and corporations. In 1963, they built the largest fire truck then in existence for the Lockheed Aircraft Company in Marietta, Ga. They sold several trucks to larger cities as well. The company was continually innovative and introduced modifications that became widely accepted throughout the industry.

In the 1960s, Howe bought the Oren Roanoke Corp. in Virginia and the Coast Apparatus Company near San Francisco, Calif. They provided the company with regional outlets on the East and West coasts and allowed the company to run three small factories, which was a better approach for a customized service. At that time the Anderson factory had 120-150 workers, creating 140 customized trucks a year.

In 1975, the government eliminated revenue sharing funds for the purchase of fire equipment. This, and other changes in the economy, slowed the purchase of Howe equipment. In 1976, the company was acquired by Grumman Industries of New York. When things did not improve, the company made the decision to close the Anderson factory. Howe Fire Apparatus in Anderson ceased operations on December 15, 1978.

Manufacture of Howe Fire Apparatus equipment was moved to the Virginia plant after Howe’s Anderson plant closed in 1978. Howe Fire equipment was manufactured until 1982. Grumman Allied Industries, the company which purchased Howe, was absorbed into Northrop Corp. in 1994 and is still in business.

In 1984, there was a Howe muster in Anderson. Howe Fire Apparatus trucks from many periods were brought here for display. At the time, nearly every fire department in Madison County (except for Elwood and Chesterfield) had either an active or retired Howe truck.

Beth Oljace works in the Indiana Room at the Anderson Public Library. She can be reached at boljace@yahoo.com.