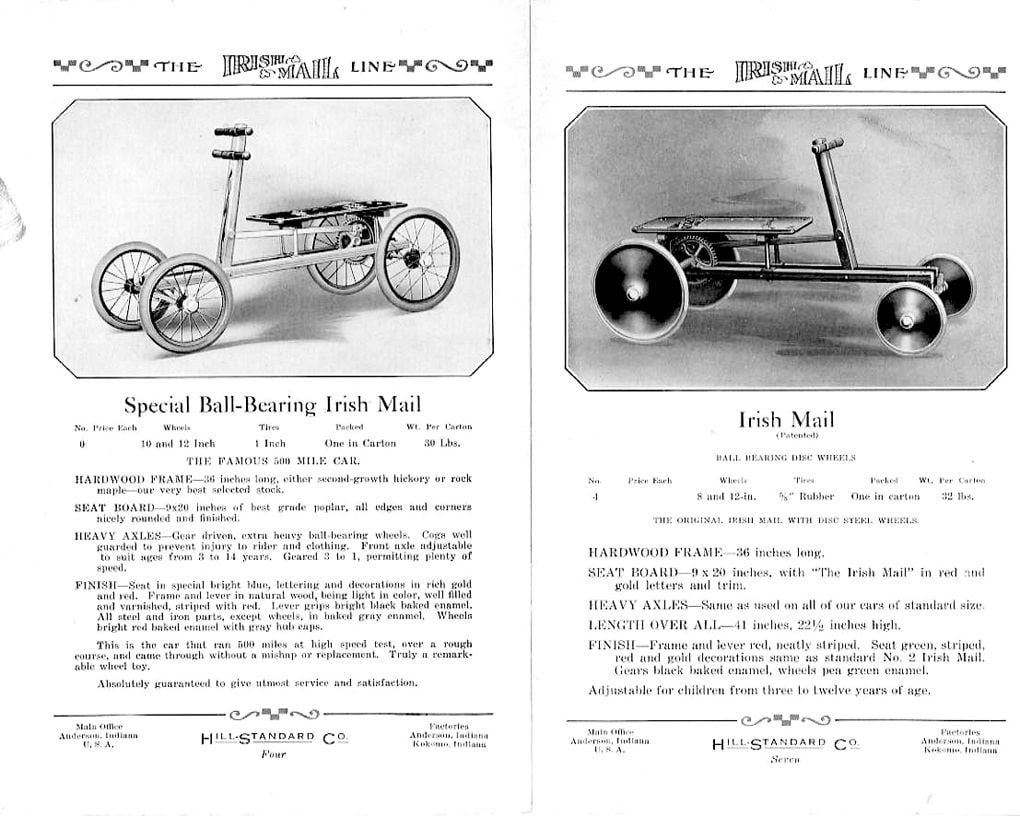 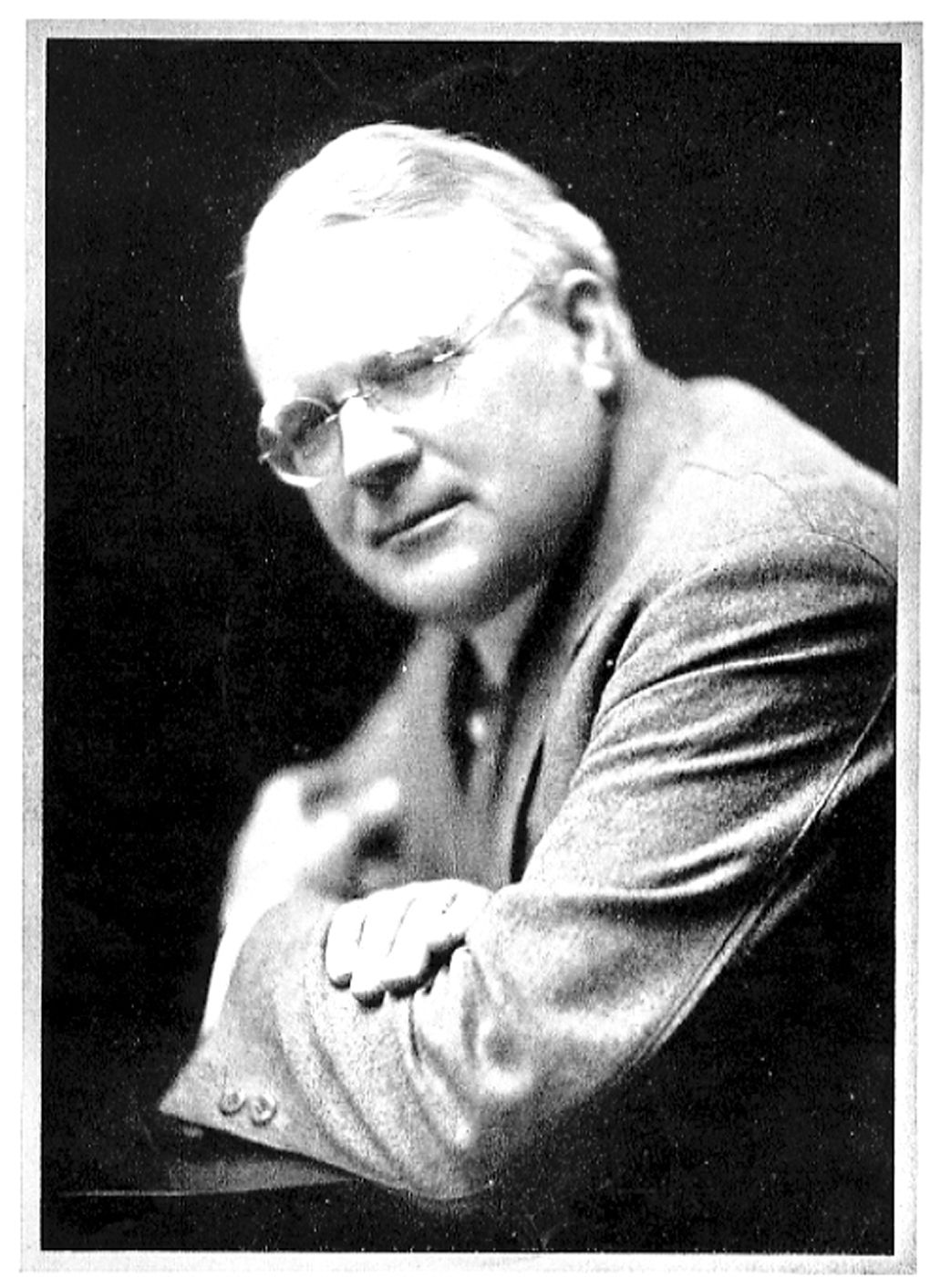 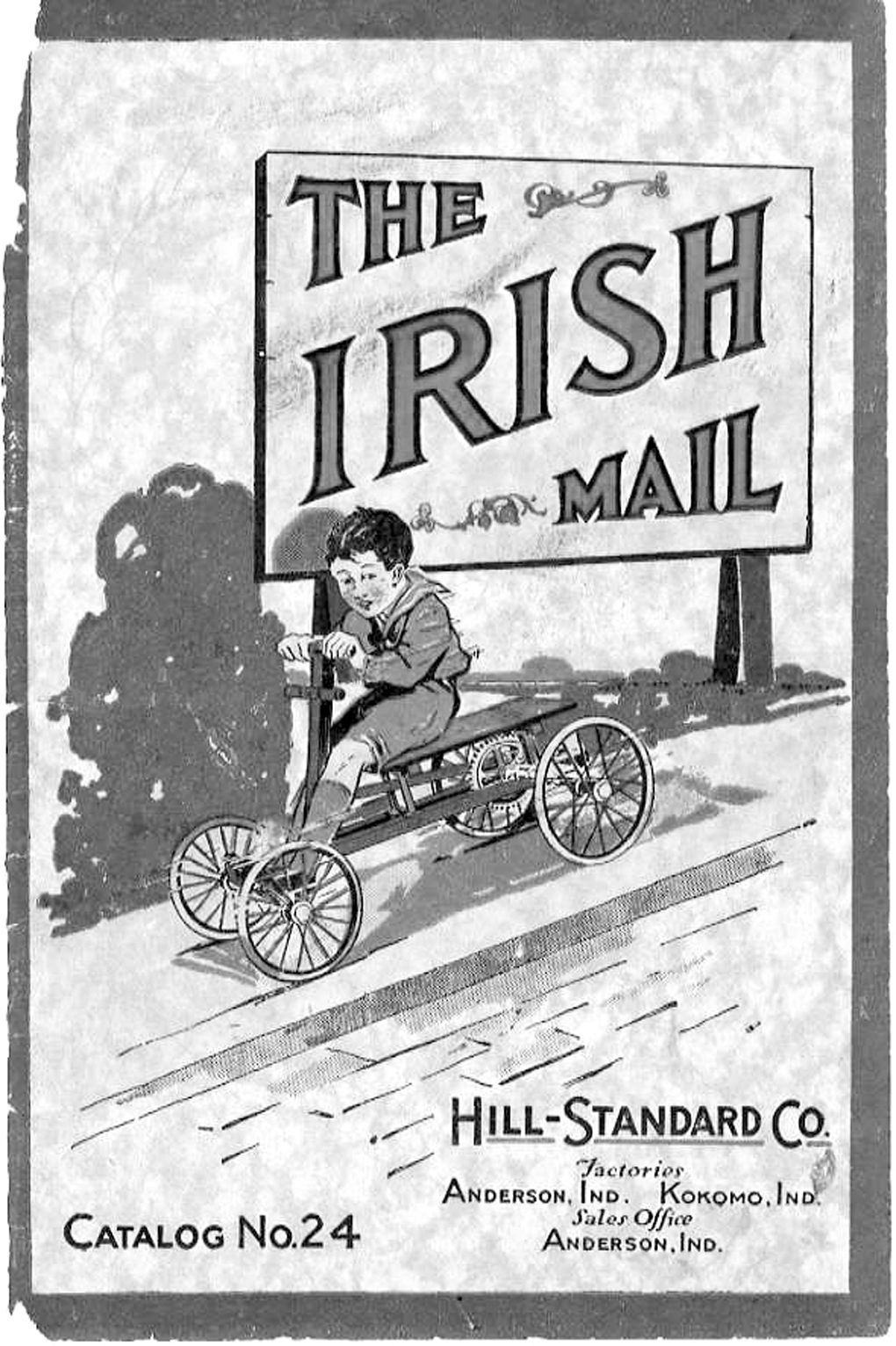 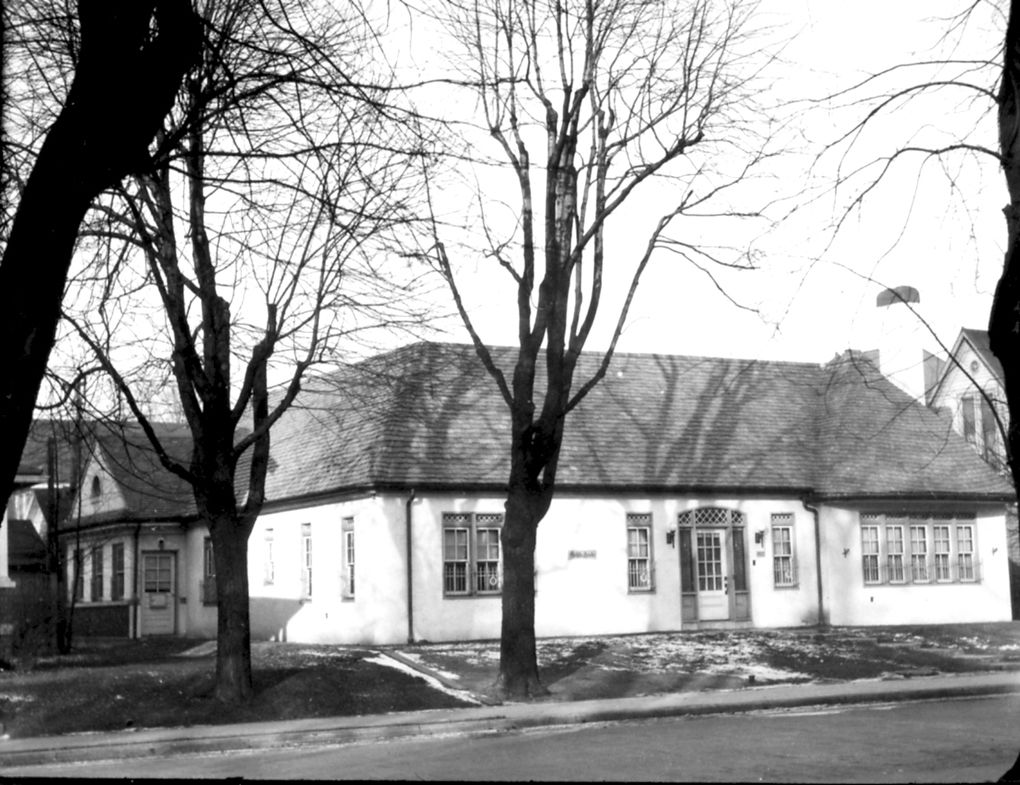 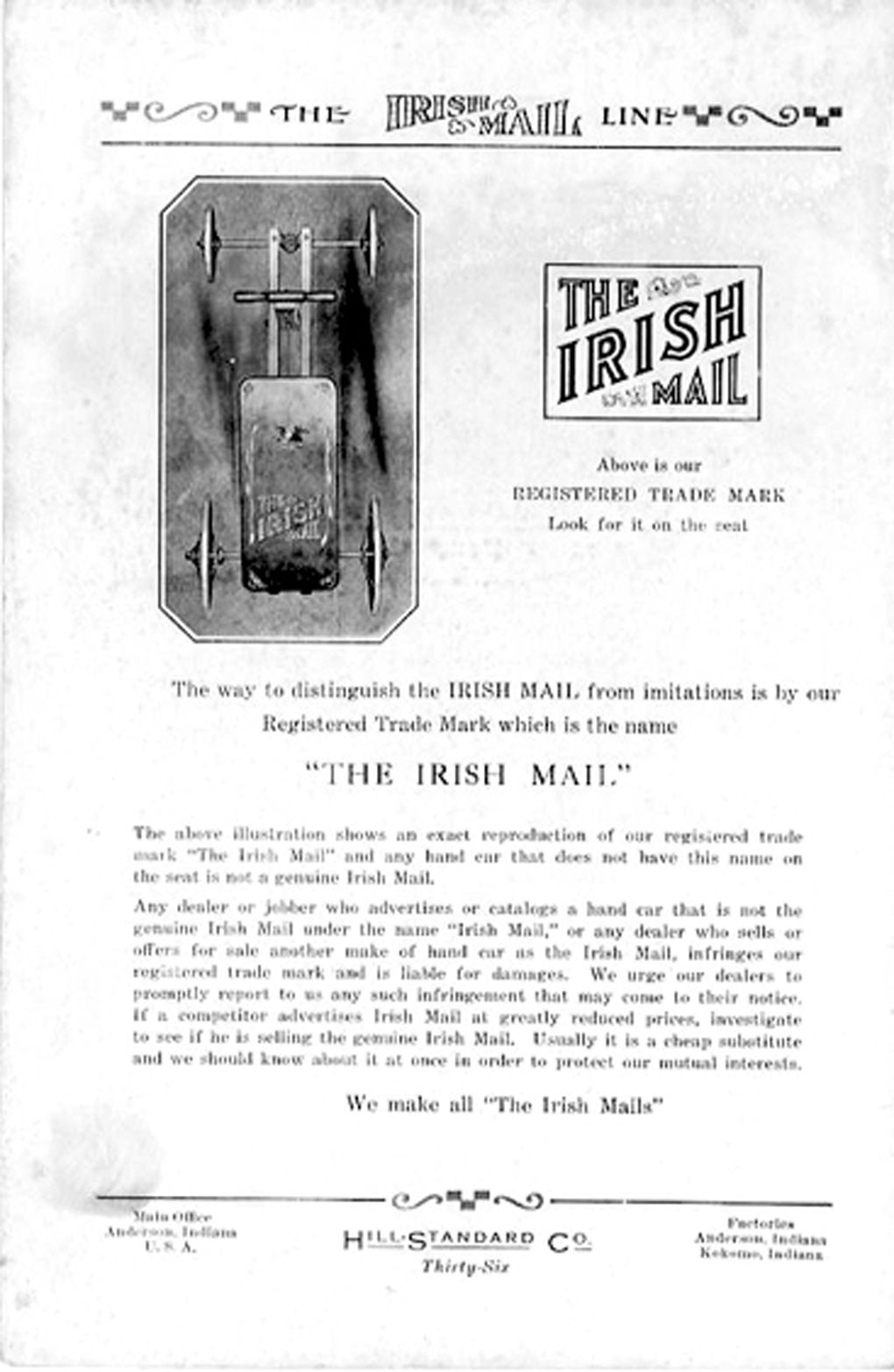 One afternoon in 1902, while riding the interurban home to Anderson from Indianapolis, Hugh Hill saw a little boy on a sidewalk pumping a small, wheeled toy with his feet.

As he watched the child he became intrigued with an idea for a child’s toy that would be propelled by pumping it with the arms.  In his home workshop, he tested ideas and finally came up with toy that had a long, rectangular seat, four wheels and a handle to pump the toy along.

He asked his 4-year old son, Robert, to test it for him and they went outside.  Robert pumped the toy up and down the sidewalk easily. As the test came to an end, a man approached Hill and told him he would like to buy the toy for his own son. Hill happily sold his prototype to the man, probably because he already knew he would be making more toys. A lot more toys.

Hugh Hill was born in Ohio in 1862, but his father moved the family to Anderson when Hugh and his brother were two. Hill was one of triplets, one of whom did not survive childhood; another, his brother Ernest, who was one of his business partners.

Hugh’s father, Jasper Hill, became part of a foundry business that made agriculture equipment. Hugh graduated from Anderson High School and went through a series of jobs with various machinery companies in Anderson and other Midwestern cities, the last of which was the chief engineer for the Illinois Insane Asylum at Kankakee.

In 1888, his wanderlust temporarily sated, he came back to Anderson and joined his father and his brothers to form the Hill Machine Company. For the next 14 years, Hill played with a series of inventions and the Hill family developed a pump manufacturing company (called Hill-Tripp and then Hill Pump) and Hugh Hill developed several tools, both original patents and improvements on existing models. To market his inventions, he formed a company called Hill Tool in 1900.

Hill’s new toy — literally and figuratively — changed everything. He formed another company, Standard Manufacturing, to handle the manufacturing of new toy. The toy needed a name and the company decided to call it the Irish Mail, after the Irish Mail train, the fastest train in the world at that time.

The new toy was instantly popular.  The Irish Mail was especially a boy’s toy.  Pumped with the arms and steered with the feet, it took some skill and strength to run it properly.  Compared to it, a tricycle (a girl’s toy) was for sissies.

Within a few years, Hill merged his two companies to form the Hill-Standard Company, which continued to market tools for a while, but was soon completely given over to toys.

In 1910, the company began to manufacture their own toy wheels and became one of largest producers of light wheels in the world.  More models followed. A Ben Hur racer looked vaguely like a chariot. An Irish Mail with a shortened seat and a truck bed was called the Irish Mail Delivery. There was a tandem Mail for two.

The company added a line of scooters and, later on, playground equipment.  Branch factories in Kokomo and Toledo, Ohio were opened to help with demand.  The Irish Mail was sold worldwide; Hugh Hill took great pleasure in travelling to Europe and South America and introducing his toys there.

Like many of his contemporaries, Hugh Hill found time to be involved in multiple enterprises.  He was on the board of the at least one bank, had an financial interest in a chemical company in Kokomo and found time to run for mayor of Anderson in 1912 with the campaign slogan, “Elect the man who made a million children happy.” He was defeated in the primary by Oswald Ryan, who was defeated in the general election by Jesse “Hick” Mellett.

Hill-Standard’s heyday was the early 1920’s. The company had just added a line of playground equipment and they won a Gold Medal at the Brazillian International Toy Exposition for the best display and for the Irish Mail.

The company was producing 4 million light wheels a year and estimated that it had sold over 1.5 million Irish Mails in a 20-year period. Unfortunately, tastes and times change. The Hill-Standard Company did not survive the Depression and went out of business in Anderson in the mid-30’s.  Hugh Hill retired from manufacturing and remained in Anderson. He died in 1948.

Today, Irish Mails are much sought-after collectibles. Also, it looks like Hill had a good idea in 1902.  The pump action drive with the arms that his toys required is good exercise for the heart. Not only did Hugh Hill make children happy; he helped to make them healthy.

Beth Oljace works in the Indiana Room at Anderson Public Library. She can be reached at boljace@yahoo.com