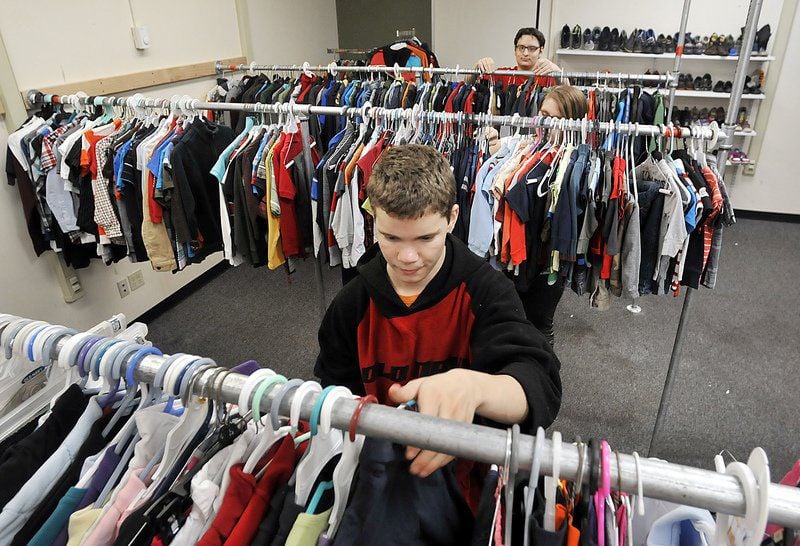 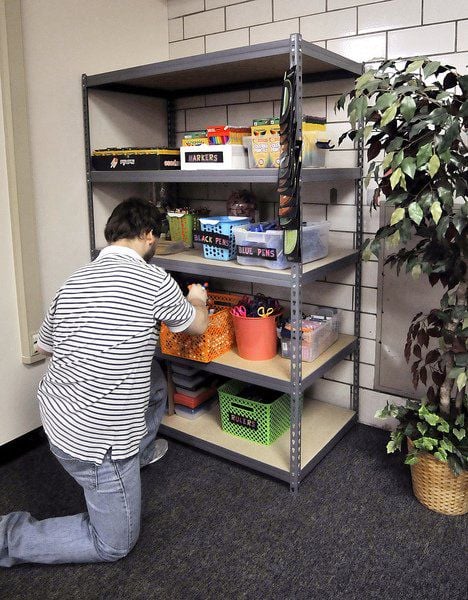 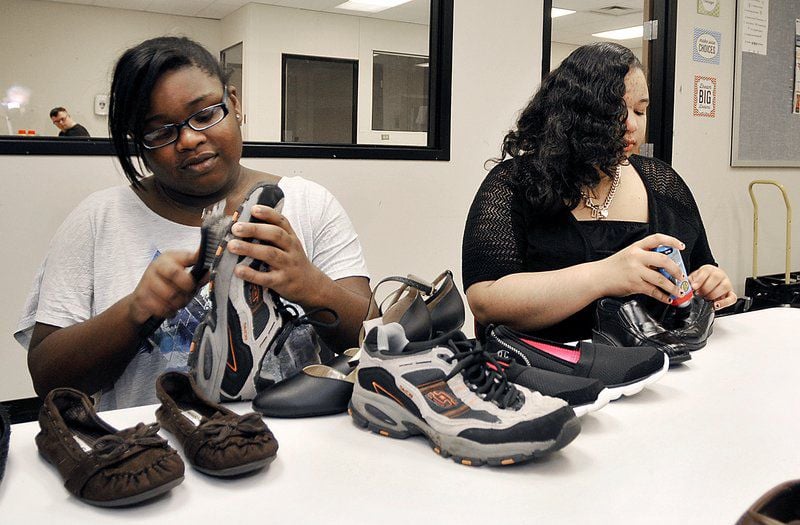 ANDERSON – Tanner Johnson, Brice Hickman and Daniel Harvel carefully cleaned dirt with a toothbrush from a pair of sneakers.

They dropped laundry into a washing machine and hung clothing on newly built racks across the hallway from their classroom.

Their activities and those of 22 others in Sheila McNutt’s employment skills classes over the past several weeks have been preparing for the opening Tuesday of Jacara’s Closet at Anderson High School’s D26 Career Center, 325 W. 38th St.

Named for 22-year-old Jacara Buchanan, an Anderson High School graduate who died in January, Jacara’s Closet is a three-room area where clothing and school supplies are stored.

They will be distributed to needy students from throughout the Anderson Community Schools district. It is one of several closets and pantries operated by schools in Madison County.

“It gives me a fully filled loving heart,” Hickman said.

Nearly 7,300, or 75.72 percent, of ACS’s student population, are eligible for the free and reduced-fee lunch program. The number of students in the program is considered a measure of poverty.

The district has designated the 2016-17 school year as the Year of the Family.

ACS Superintendent Terry Thompson said he had already considered a consolidated location for a closet when he discussed the idea with WTHR-13 news anchor Andrea Morehead, a graduate of the former Highland High School.

“It was a few days before Jacara’s funeral when Andrea and I met. I shared my vision and showed her a location in our D26 Career Center where I thought we could make this happen,” he said.

“I shared that we had students who often needed support and since we wanted to honor Jacara Buchanan because of her lasting impact on so many and for her love of life, her family, singing, and painting that we could do something special, he said.“

The idea, Thompson said, was not only to help needy students but also to provide hands-on experiences for students in the life skills class.

“She was very big on helping people, but if this can help kids in need, she would be all for this,” she said.

Jacara Buchanan is also remembered in a part of the three-room closet. Some of the Indiana State University graphic design major’s art hangs in the entryway.

“I didn’t know how talented she was until I saw her paintings,” Sharon Buchanan said. “There are some that still aren’t on display because I am still going through some of her stuff.”

“Throughout the year, our families can always get donated uniforms from our front offices, and we try to have enough on hand in case of in school emergencies,” said Commander Jill Barker, APA’s superintendent.

In addition, the school hosts Swap & Shop events open to all families so students can obtain gently used uniforms, she said.

“Essentially, families were able to come in and find what fits and walk out with it for free,” she said. “Some of the families and passers-by who saw what we were doing left us smaller financial donations which we put toward laundry detergent.”

Barker said the program limits each child to two pairs of pants and three uniform shirts.

“If they couldn’t find what they were looking for, we took down their sizes so that we could keep an eye out for them as more donations come in,” she said.

Uniform drives take place in November and May, with Swap & Shops set for December, January and April.

“We’re trying to center them around when our kids tend to have their growth spurts, but it’s very hard to predict because they grow so quickly,” Barker said.

APA also is working with Second Harvest to open an on-site food pantry at the 29th Street campus. The pantry, stocked through food drives, donations and grants, will open on a biweekly basis then transition to weekly hours, Barker said.

“During the school day, it will be available for students who need items for lunch. No questions asked,” she said. “This will also be open to all of our families to help fill the food gap which essentially equates to seven pounds of food per household member per week.”

Some districts, however, don’t operate closets or pantries and have no plans to do so.

“Our community is really good about getting together and helping those in need,” said Daleville Superintendent Paul Garrison.

Jacara’s Closet will be open from 3 to 5 p.m. Tuesday. The regular schedule will start Nov. 1 when Jacara’s Closet opens the first and third Tuesday of the month.

Students will need referrals from a teacher or social worker.

Jacara’s Closet will be staffed by volunteers from East Side Church of God who will collect and distribute clothing and school supplies.

Donations may be dropped off to Loraine Cooper, administrative assistant at Anderson High School’s D26 Career Center, 325 W. 38th St. Donations also may be dropped off with Debbie Sawyer or Diane Fredericks at the ACS Administration Center, 1600 Hillcrest Ave. Each of these drop-off designees is authorized to provide receipts to those who wish to have one.

For those who wish to make a cash donation, only Kay Bales, executive director of the Anderson Education Foundation, can provide a receipt. Her office is in the ACS Administration Center.