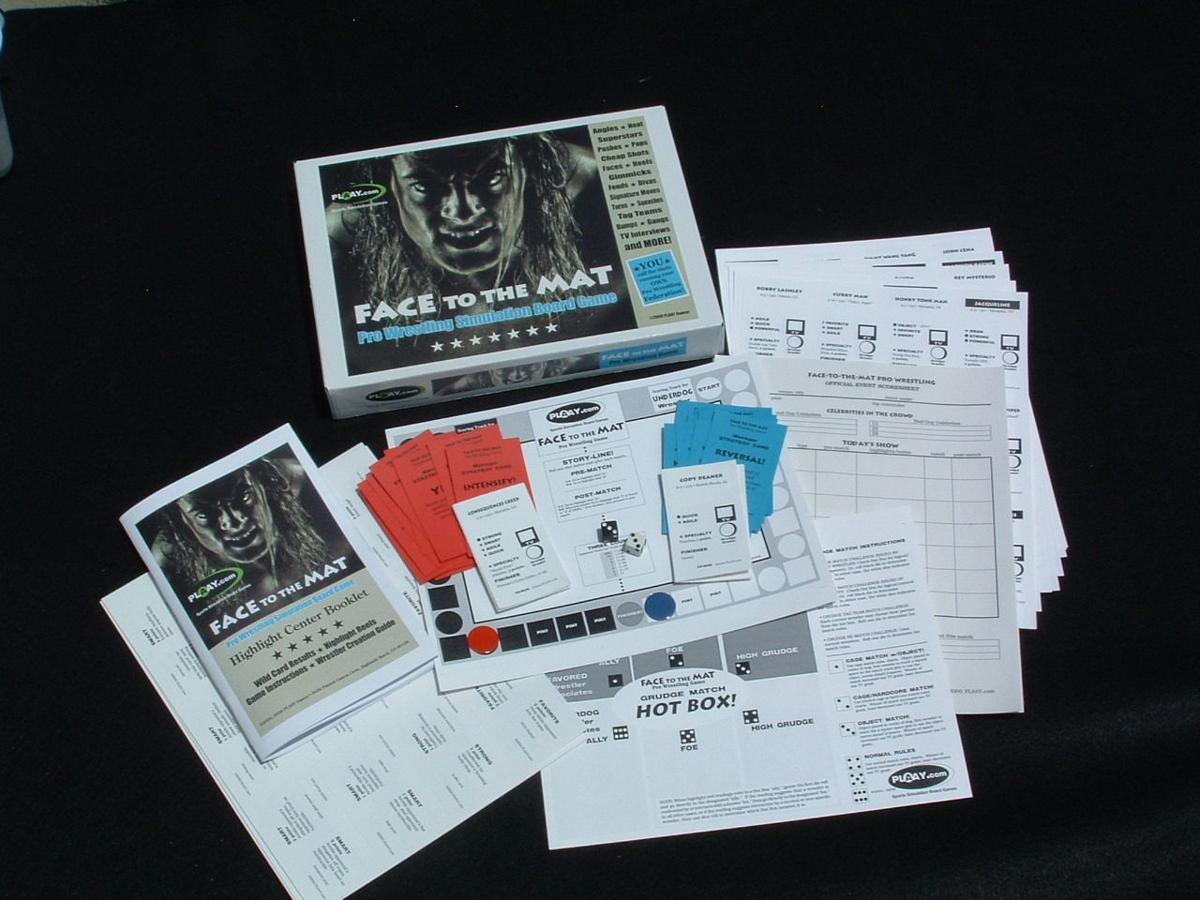 Face to the Mat complete with charts, wrestler cards, game board, dice, rules and markers.

Face to the Mat complete with charts, wrestler cards, game board, dice, rules and markers.

For nearly as long as professional wrestling has been popular, there has been a way to simulate matches on a tabletop. But pro wrestling has changed greatly over the past 30 years.

No game has covered that change better than Face to the Mat from Plaay.com Games.

The change has come from an increased emphasis on the storylines inherent in most matches. Pro wrestling has become very much like an athletic soap opera, continually pitting good guys against bad in an engaging morality play.

While many games can do a good job of simulating the matches of pro wrestling, none can simulate an entire federation with its various television presentations and pay per view cards like Face to the Mat.

“Well, at first, it wasn't important to me.  Or, I should say, I didn't realize the importance of it,” said FTTM designer and company owern Keith Avallone. “But I ran across a copy of a book,  "Professional Wrestling: Sport and Spectacle," by Sharon Mazer, which was a total eye-opener to me.  It was written by a psychologist, and discussed the real appeal of professional wrestling.  Over the course of the book, she chronicled  how pro wrestling is really not a contest of athletic supremacy.  It's not about moves and counter moves, strength or power.  Pro wrestling is the battle of good vs. evil, heroes and villains, the injustices of life made right--or not--in a wrestling ring.  Once I digested this information, I knew that I had to adapt the game to incorporate the soap opera element.  Fortunately, the game already had a couple of mechanisms in place that could be used for this--the TV Grades, Grudge Grades, and Highlight Reels.  It was just a matter of developing the potential story lines and "angles" and incorporating them into the ‘Highlight Reels.’ Up until FTTM, no wrestling game had any kind of story-line element to it at all.”

Avallone started working on the game over 30 years ago. Inspired by some discarded packaging for a World Wrestling Entertainment action figure, he put together the basics for the game. “For some reason, seeing those illustrations triggered the creative machinery in me, and I came up with a very, very basic game,” he said. “Basic as it was, it really was the foundation for FTTM--it used a fast-action deck that referenced qualities, and points generated from the presence of those qualities moved the wrestler down the match track to victory.  I played it for awhile, and it was fun, but had other sports projects that I was doing at the same time.  I did share the game with a fellow in my church--he and his son were big wrestling fans--and they played it incessantly.  So, I knew there was some potential there.”

He created Plaay.com in the spring of 2000, but it was mostly to release a football game he’d designed called Second Season.

“But, I figured as long as I had the website, I might as well offer a couple of the other games that I had put together,” said Avallone. “ I thought that with a little polishing, the wrestling game might have some appeal, so I dived into some play-testing, added a few wrinkles, created a small universe of fictional wrestlers, and off it went. I think the simplicity of the game really worked to its advantage, because it made it really easy for people to experiment with their own rules and adaptations. They'd usually then get back in touch with me and give me feedback on some of the things they were doing, many of which I then incorporated into the game.  For the first couple of years, there were lots of improvements and enhancements, and each time there was a major innovation, I would mail an update to everyone who had already bought the game.  By 2002 or so, though, the game was pretty much in the form in which it's currently being offered.”

By 2004, the complications and logistical difficulties of job and family forced Avallone to close down his game company. He entered into an agreement with another company to take over production of Second Season, but the wrestling game went out of print.

During the next few years it gained nearly legendary status. Those who had it kept playing it and those who heard about it and couldn’t buy a copy coveted it. By 2009 his job situation changed and so had his family obligations so he had the time and the money to re-launch the company and Face to the Mat.

He upgraded his website (www.plaay.com), regained control of Second Season and also made FTTM available again.

The packaging of the game was altered to make it a bit easier to use and certainly easier and less expensive to ship. Right now the game parts with a dozen sample wrestlers sells for $32. Then there are a variety of options for wrestler sets. A current pro set sells for $20 and contains 152 wrestlers. It is also available as a PDF for the gamer to print for $11. A set of 96 wrestling legends is $12, a 90s stars set is $12, which is also 96 cards and a jobbers (lower level wrestlers who are of lesser talent) set is $7 and contains 48 wrestlers. Finally there is a 96-card fictional set from the Wrestling American Federation for $12.

The game rules show the gamer how to create their own wrestlers for the game. So whoever purchases the game can keep their federation populated with new, fresh talent. FTTM isn’t ideal for just sitting down and playing some random matches. But for setting up a federation and running it with entertaining matches and interesting storylines, no game is the equal of Face to the Mat.

“At some point, I will re-do ALL the game materials for FTTM including the game boards, strategy cards, and the highlight reel booklet,” said Avallone. “I keep hoping to get that done, but it always seems like there's something more pressing to do.”

Right now Plaay offers eight games. FTTM runs right in the middle in terms of popularity. “It's definitely a ‘niche within a niche,’  with only a small percentage of sports board game fans having much interest in pro wrestling,” said Avallone.  “That's one of the reasons that I feel this game deserves its own unique marketing emphasis, going directly to wrestling fans, rather than sports board game fans.  I think the game is easy enough to understand and play that you don't necessarily have to be a sports board gamer to enjoy it.  FTTM is my fifth-best selling game, behind Second Season, Hockey Blast, Roller Rumble and Cold Snap. It runs ahead of Crash and Scramble, Demo Derby Smash-Down and Bowl-O-Rama.