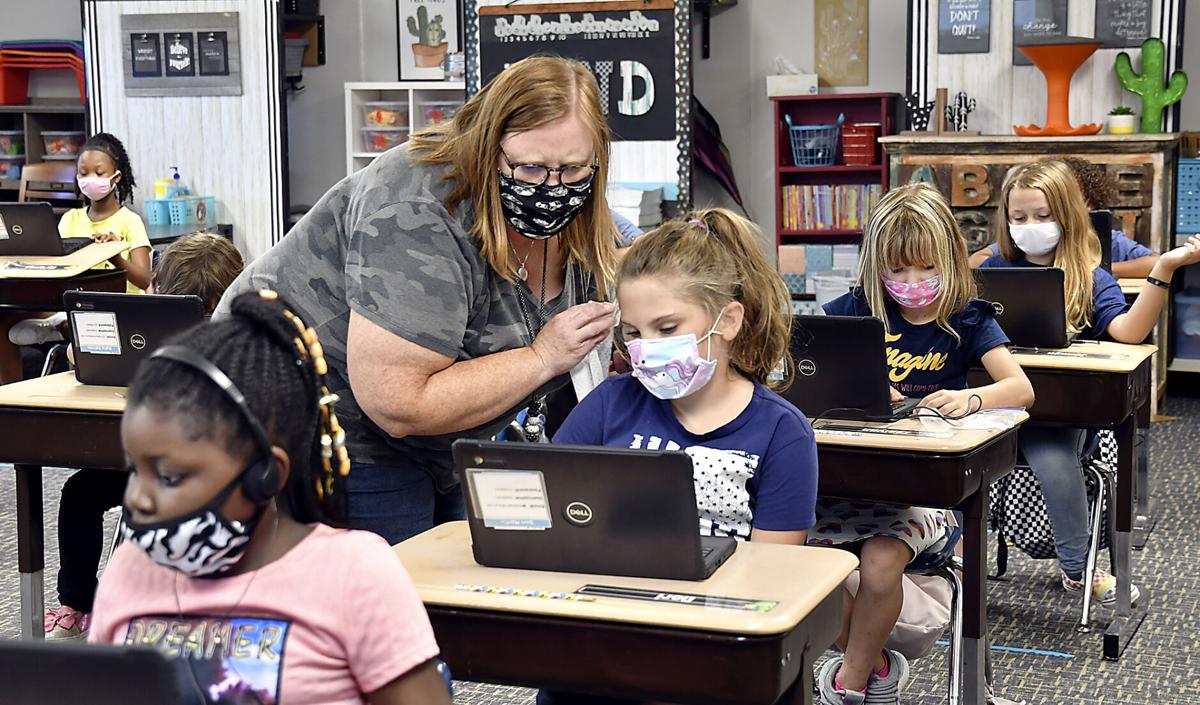 Masking is just one result of the COVID-19 epidemic, as teacher Staci Cooper helped third-grader Dori Martin in September at Anderson’s Valley Grove Elementary. Another result: student vaccinations are down, the CDC says.

Masking is just one result of the COVID-19 epidemic, as teacher Staci Cooper helped third-grader Dori Martin in September at Anderson’s Valley Grove Elementary. Another result: student vaccinations are down, the CDC says.

The pandemic has had an adverse effect on the number of children receiving required and recommended immunizations.

Citing the Centers for Disease Control and Prevention, the report said the decline was most evident in children older than 2. The CDC made this conclusion due to a decrease in childhood vaccination orders through the Vaccine for Children Program. The national program provides federally purchased vaccines to nearly half of all children.

Indiana children are required to receive a number of vaccines to attend kindergarten. These include hepatitis A and B, diphtheria, tetanus, pertussis, polio, chickenpox, measles and rubella. A flu shot is recommended but not required.

2019, the most recent data available, saw a 3% increase in the number of Indiana infants age 19 months to 35 months who received the full vaccination series, bringing the total to 70%.

The 19- to 35-month range is the recommended time frame for children to receive their needed vaccines.

Counties such as Spencer, Pike and Monroe were among the highest vaccinated counties for children, all surpassing 80%. On the opposite end, Daviess County had the lowest rate, at 49%. Martin and LaGrange counties were both under 60%.

More than 91% of enrolled kindergartners had received vaccinations for measles, mumps and rubella. The rate is even higher for other vaccinations, such as diphtheria and chickenpox.

Rates are not yet available for the 2020-21 school year, though a decline is likely — at least according to what health departments and other organizations have observed through the pandemic.

There is no one answer as to why vaccinations have declined, as stay-at-home orders, access and vaccine distrust have all played a part.

Sexton said the figure is an estimate based on what the health department has seen during the pandemic.

The beginning of the pandemic posed difficulties in keeping children up-to-date with vaccinations as fewer people left their homes. Sexton said people worried about contracting the virus especially avoided hospitals in the early months of 2020.

Doctor’s offices not seeing people in person was another challenge.

“You can’t give a shot during a virtual visit,” Sexton said.

The CDC said wellness visits and check-ups likely declined during the pandemic. These visits often go hand-in-hand with the administration of childhood vaccines.

Health care is another factor tied to how often children receive preventative care. The Indiana Youth Institute’s report said those with health insurance are twice as likely to access preventative care compared to children who are uninsured, most likely due to cost.

Undocumented immigrants are particularly at risk. They often lack access to employer health insurance, as well as Medicare, Medicaid and other programs.

The Indiana Youth Institute said less preventative care, plus lower vaccination rates, could create a second health care crisis among low-income children. The relaxing of social distancing measures will make children more vulnerable to vaccine-preventable diseases, according to the CDC.

Anti-vax and vaccine hesitancy rhetoric have not helped matters.

Sexton said there is fear among some parents that health professionals will try to sneak in the COVID vaccine if they bring their child to a clinic.

This is simply not true, and parents can pick and choose which vaccines they want their children to get.

“We only give what they consent to,” Sexton said.

Then, there’s the issue of historical distrust toward the health care industry among minority groups.

African Americans were the subject of multiple unethical medical experiments, such as the Tuskegee Syphilis Study. Conducted by the U.S. government and the CDC, the effects of untreated syphilis were studied on Black men who did not know they had the disease and weren’t told they would not be treated.

Non-COVID vaccines could also be an afterthought due to the focus on COVID.

Childhood vaccines are “way down” in Vigo County, according to Roni Elder, the county health department’s health educator and media coordinator.

Elder said the county health department is a known COVID vaccine site. People might not even associate it with offering other vaccines.

“People might also think we’re not doing anything else other than COVID,” Elder said.

Health departments aren’t very popular at the moment, either. Sexton said the public trust isn’t there — at least among certain portions of the populations.

“We’re just here to get them vaccinated against vaccine-preventable diseases we’ve had for years and years,” she said.

Getting kids caught up

The immediate and long-term goal is now getting kids who have fallen behind in their immunizations caught back up.

Sexton said they are contacting parents whose children are behind and offering to make appointments.

The Howard County Health Department has made an effort to visit every middle and high school to offer vaccines to students in sixth through 12th grade. More are planned for the spring.

But they haven’t been very successful so far. Sexton said they are only averaging between 10 and 30 students per clinic.

What is not known is how many people have turned to their own providers for vaccinations. Both Sexton and Elder said it is possible people went with a private health care provider instead of using health departments.

The Indiana Youth Institute recommends increasing the diversity of people advocating for vaccines and the benefits of them at a local level.

At the state level, the institute said a greater push is needed to ensure all children have health insurance. To do so, more messaging is needed to inform parents what they are eligible for, such as Medicaid and Children’s Health Insurance Program. CHIP provides coverage to families that earn too much to qualify for Medicaid.

The decline in childhood vaccines is on the radar of the Indiana State Department of Health, which said it is “working with healthcare providers and schools to help kids catch up,” though the department did not elaborate on what those efforts are.

The ISDH’s report on 2019 vaccinations recommended that health departments implement “targeted provider education” to confirm children get vaccinated before the 19-to-35-month window, instead of focusing on kids who are already past due.

“Reducing the number of missed opportunities, and vaccinating at the 15-month appointment, would greatly improve vaccination rates as well as number of children who are behind,” the report said.

At a national level, the Indiana Youth Institute recommended that reconciling discriminatory health practice and promoting vaccines “should directly confront and address the historical traumas that have created high levels of distrust in the government and healthcare system.”