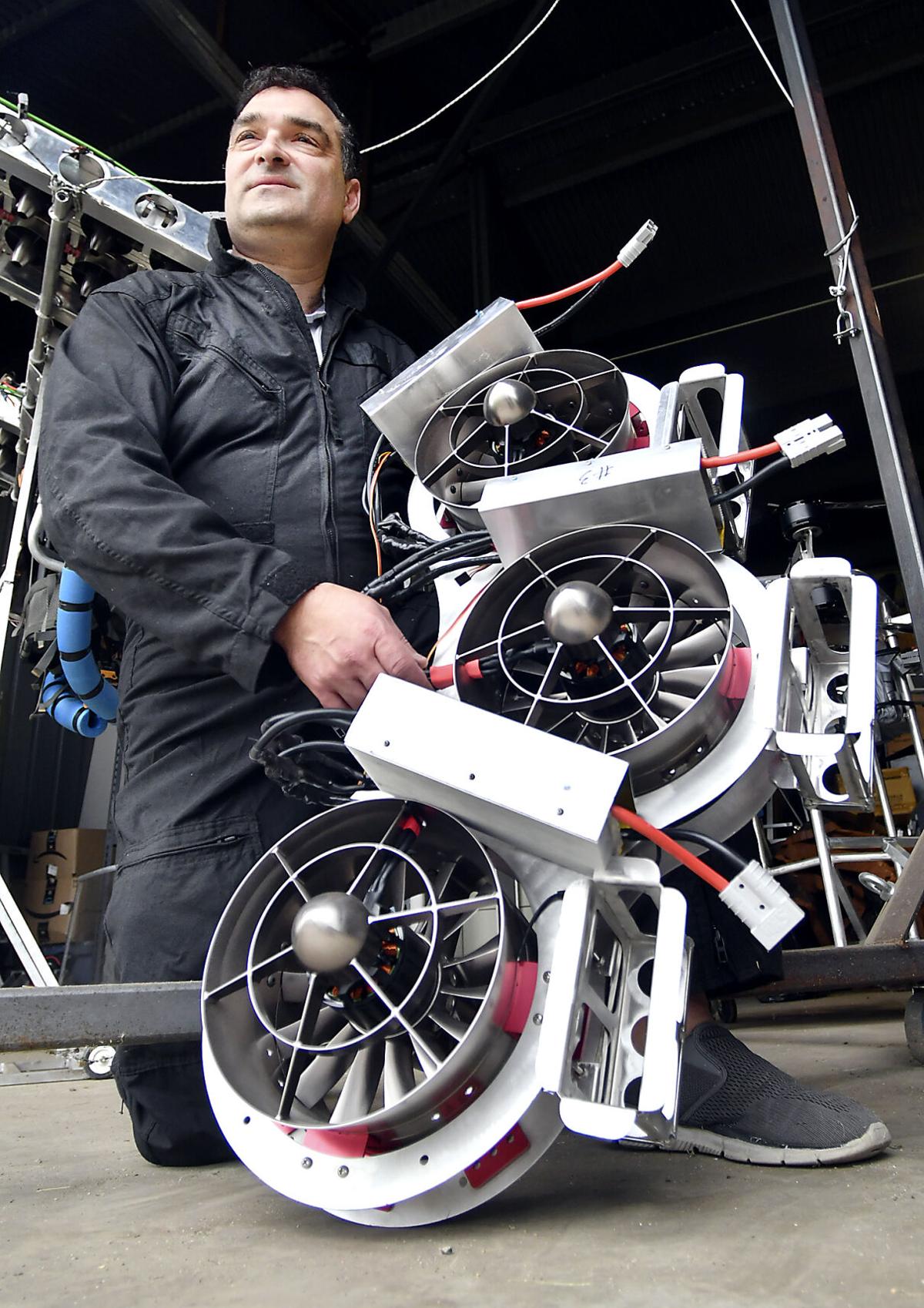 Pete Bitar holds one of the tail thruster units for the LEO concept flying vehicle that is one of his latest projects.

This is an artist rendering of the LEO concept flying vehicle that Pete Bitar has been working on. 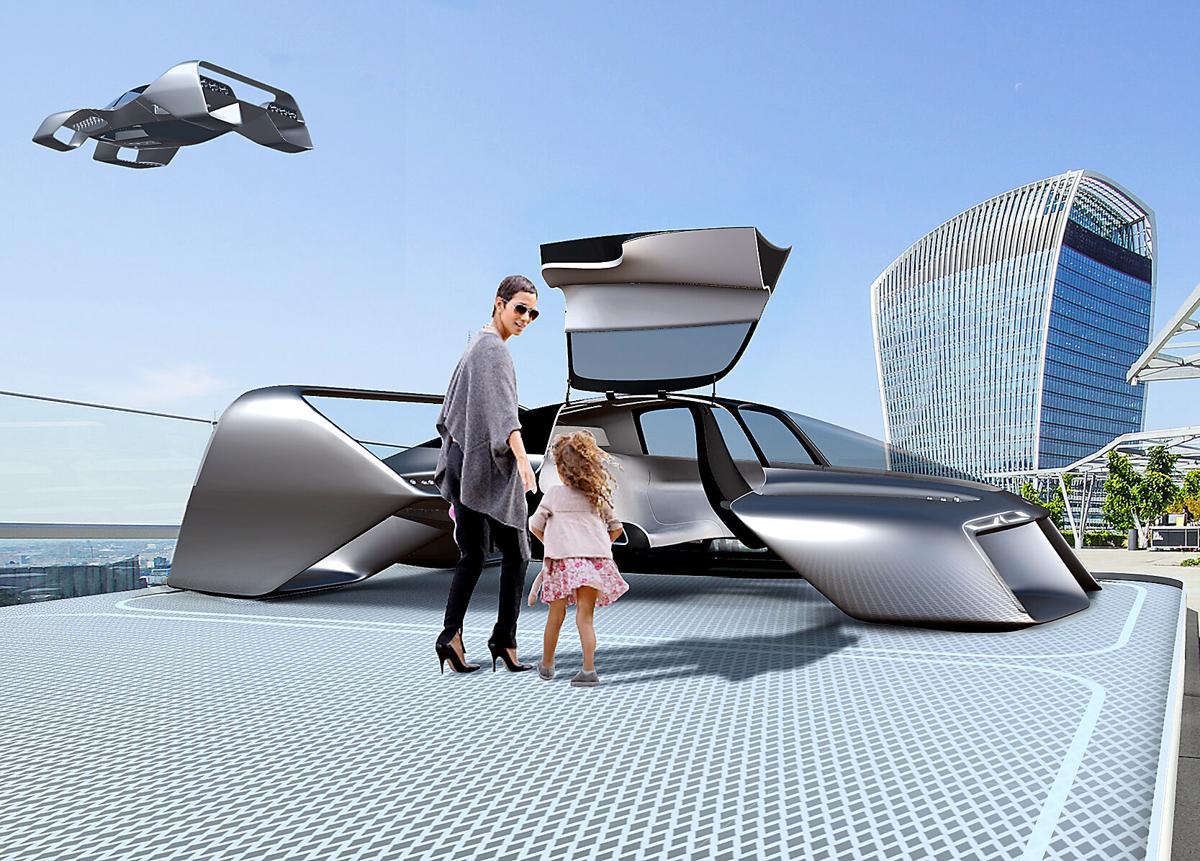 This artist's rendering shows the LEO concept flying vehicle that Pete Bitar has been working on.

Pete Bitar holds one of the tail thruster units for the LEO concept flying vehicle that is one of his latest projects.

This is an artist rendering of the LEO concept flying vehicle that Pete Bitar has been working on.

This artist's rendering shows the LEO concept flying vehicle that Pete Bitar has been working on.

ANDERSON — Pete Bitar’s plans almost always are up in the air.

A couple of years ago, the local inventor and entrepreneur worked on the VertiCycle, an autonomous single-person drone. These days, his attention is directed at creating the Mark 6 Jetpack and the Leo flying production automobiles.

“The Jetpack is the test system for the Leo system,” he said. “We spent a year designing this thing and working out the math.”

Bitar said he expects to bring the first Leo coupes — designed to seat up to three people, travel at speeds up to 250 mph and fit in a standard two-car garage — to market at a price of about $290,000 in 2023 or 2024. At that price range, the oversized drones would be used primarily as air taxis, he added.

“We see people with the opportunity to do long commutes because of the speed.”

The ability to fast track the plans, Bitar said, is the result of recent attention he has received in national and international competitions and on websites, such as Mensgear.com, futureride.com and newatlas.com.

In June 2020, his team was one of 39 competing for $2 million in GoFly prizes. His was one of two teams that competed for the Innovation Show Prize, but none of the competitors qualified to win.

His participation in GoFly attracted the attention of former Mazda designer Carlos Salaff, owner of Salaff Automotive, which builds custom sports cars for celebrities. Salaff wanted to collaborate on a “true flying car” with no wheels.

Together, they created Leo Flight Corp., which is fielding inquiries from investors and taking preorders for the all-electric coupe, Bitar said.

In July, Leo won NASA’s 2021 HeroX competition, beating out 3,000 teams from around the world.

The foundational technology of Leo’s propulsion system is based on the Jetpack, Bitar said, which is being developed concurrently under a contract with the Defense Advanced Research Project Agency. DARPA’s predecessor was a developer of the Internet.

“I was very honored to win a contract with them and develop the Jetpack further.”

Though the price tag may be steep for the average driver, in the long run, Leo, which is expected to be launched more as an air taxi service similar to Uber or Lyft, is likely to offer several advantages over current transportation, Bitar said. That includes less intrusive and expensive infrastructure, environmental responsibility and safety.

“We’re designing it be be remote controlled in case of emergencies. There will be multiple redundant safety systems.”

Soon, Anderson residents and visitors are likely to witness Leo as it hovers about 20 feet over the city, Bitar said.

“We want to make Anderson the first pilot program for this. We hope to have something flying next year.”

Before the car goes to market, however, several things must be in place, including landing platforms, charging stations and basic rules of the air Bitar expects to be developed by an advisory board made up of former Federal Aviation Administration officials.

“It’s not that hard. It’s easy to fly,” Bitar said. “It won’t be as hard as flying an airplane would be.”

City and Madison County leaders long have looked for a replacement for General Motors and its subsidiaries that at one time were the source of a golden economic age for the region. Though Bitar is modest about the potential, some like Clayton Whitson, CEO and president of the Madison County Chamber of Commerce, believe Anderson could exceed Detroit’s success with the evolution of personal air transportation.

“I think we’re beyond GM. I think we would be positioned well beyond GM’s glory years,” he said. “It would be a boost we would see for generations to come.”

Not only would Leo Flight bring back manufacturing jobs, it also would make Anderson a center for transportation technology, automotive education and sir transportation policy.

Rob Sparks, executive director of the Anderson/Madison County Corporation for Economic Development, said he doesn’t think the world of The Jetsons is exactly around the corner. But he is cautiously optimistic and sees baby steps taken toward the use of vertical takeoff and landing aircraft as hospitals transport patients in helicopters.

“We have some real-life examples of it working right now.”

To give the region an edge, Sparks said, work should start now to put in place the infrastructure, education and workforce development that will lead to a successful consumer launch.

“We should be looking into that future and what that looks like in that sector,” he said. “We see a lot of technical and future jobs being developed in that sector and high-level private sector investment in Anderson.”

For more information on Leo and to follow its progress, visit leoflight.com.

Pete Bitar and Carlos Salaff are among many around the world hoping to build and market the flying machine that will become the standard.

Big names, such as Airbus and Uber are investing in or developing their own vertical take-off and landing aircraft.

In June, Klein Vision’s fixed propeller AirCar, powered by a 160-horsepower BMW engine, made a 35-minute flight between two cities in Slovakia.