Mofab Inc., 1415 Fairview St. in Anderson, specializes in welding and custom metal fabrication, including the creation of decorative iron gates, fences and other ornamental ironwork. 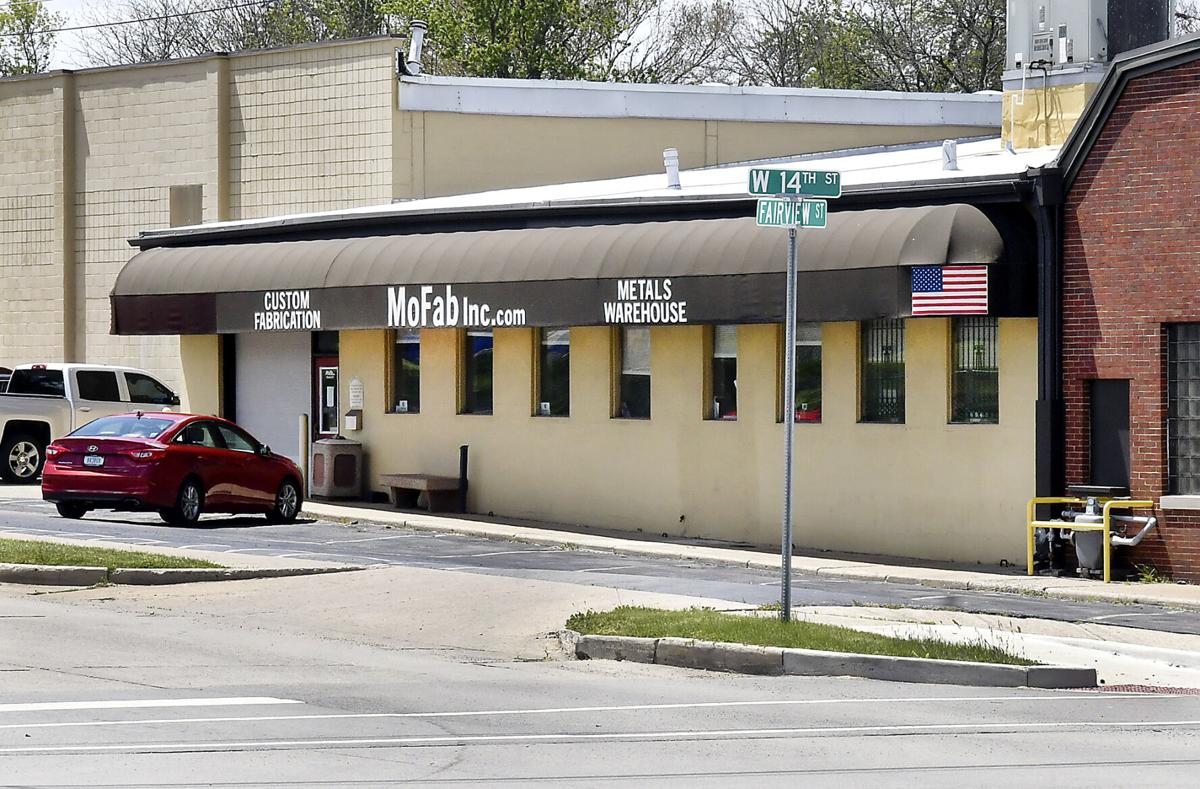 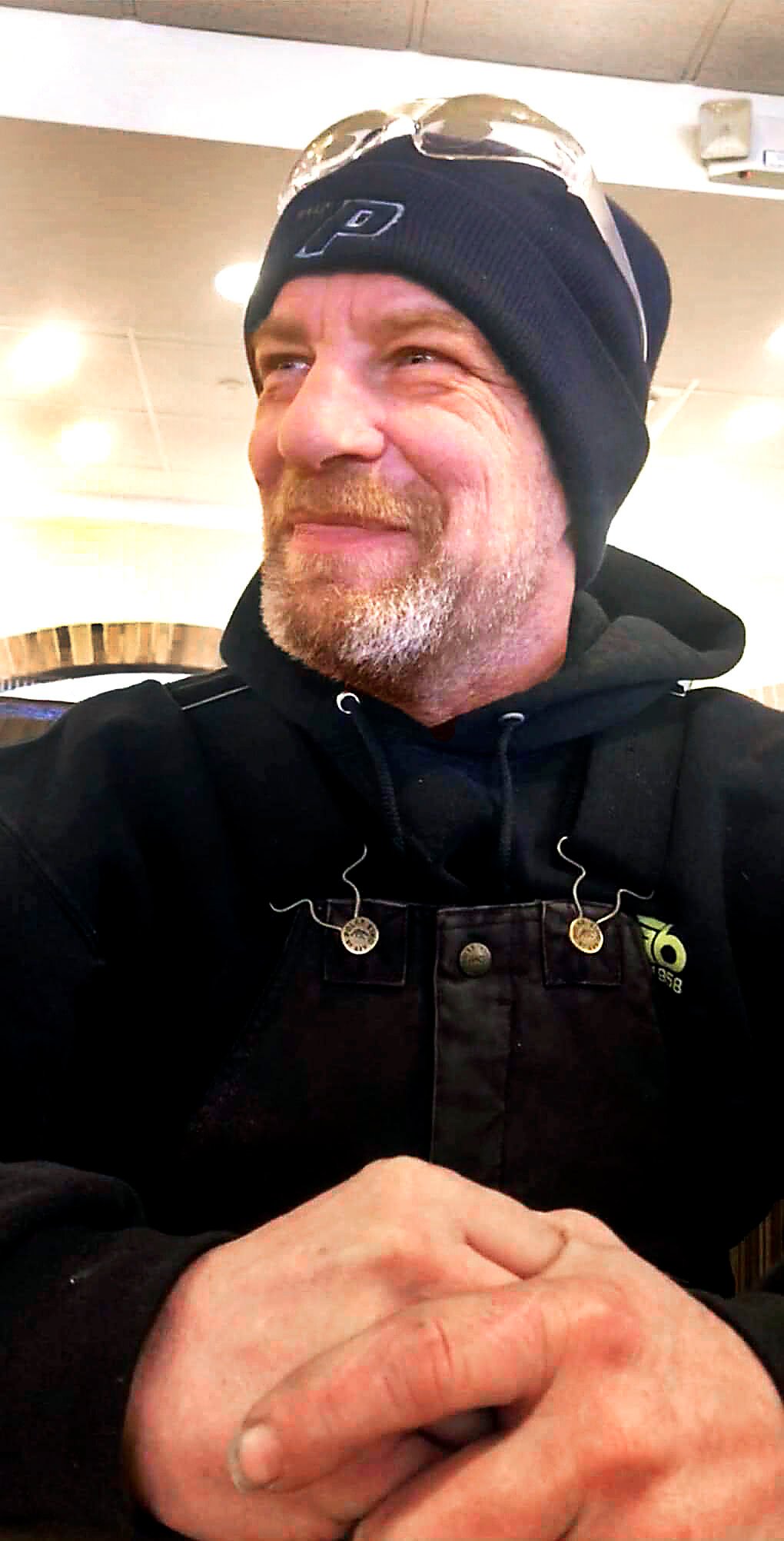 Mofab Inc., 1415 Fairview St. in Anderson, specializes in welding and custom metal fabrication, including the creation of decorative iron gates, fences and other ornamental ironwork.

Editor's note: The original version of this article incorrectly identified the organization that noted safety deficiencies at Mofab Inc. seven months before the death Dondi Edwards. A third-party company noted the original deficiencies, according to a Mofab official.

ANDERSON — Dondi Edwards was crushed in an accident at Mofab Inc. more than seven months after safety deficiencies were found with a crane he was operating at the time of the accident.

Sam Bartels was also injured in the accident at Mofab, but he survived and remains in physical therapy for an arm injury. 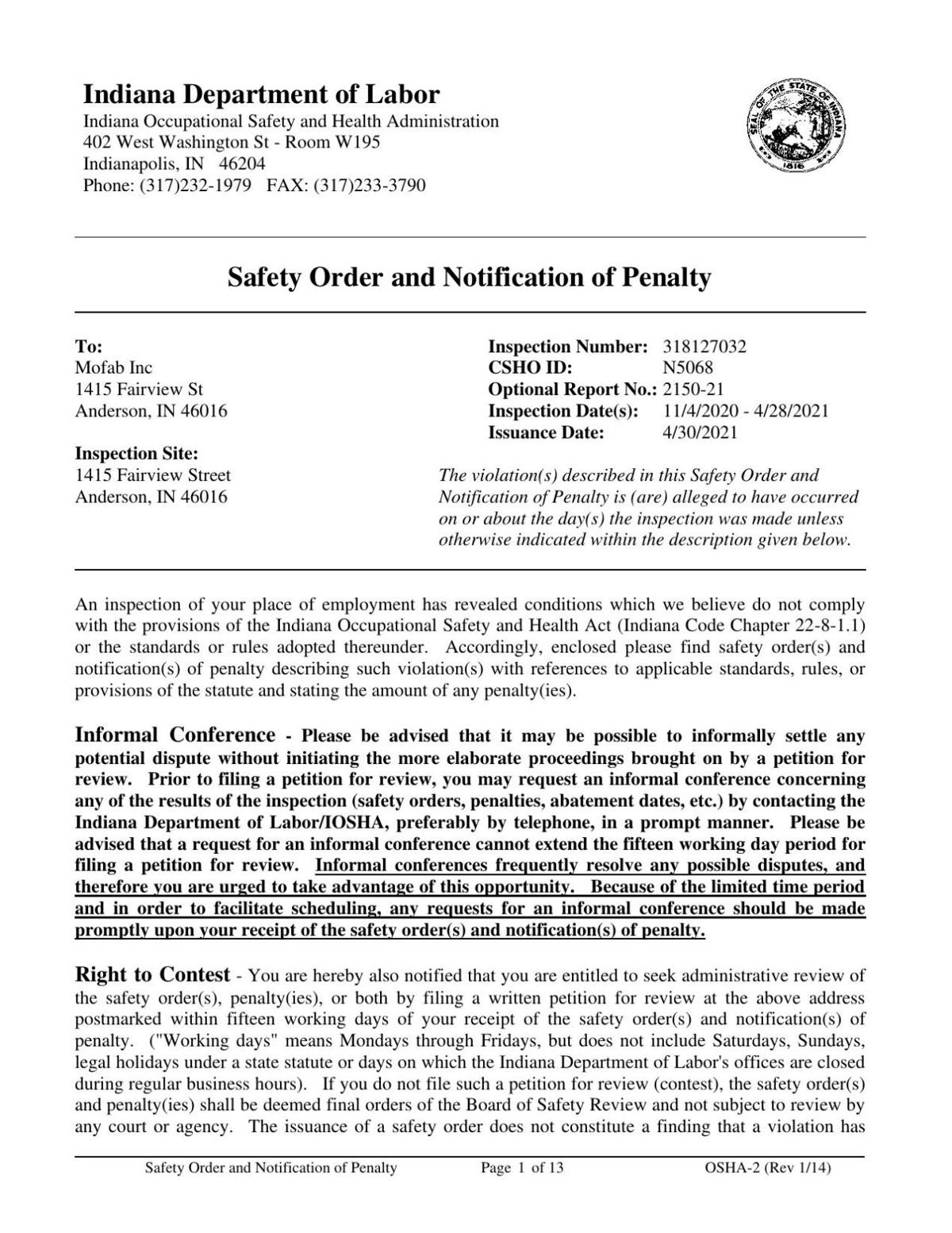 However, Mason Haines, one of the owners of Mofab, and Chief Financial Officer Blane Trinkle said the safety issue noted in March did not contribute to the accident and Edwards’ death.

“The deficiencies had nothing to do with the crane’s capacity to lift,” Trinkle said. “The crane did not fail. It’s pretty clear the strap failed.”

The violations listed by IOSHA — all categorized as serious — did include the use of a damaged or defective sling, along with the following:

• Exit routes that were not kept free and unobstructed.

• Employees using a side pull with a crane, causing stress on parts of the crane and exposing employees to hazards.

• A damaged or defective sling used during the movement of product in excess of its rated capacity, exposing employees to hazards.

• Employees were not kept clear of suspended loads or loads about to be lifted by a sling.

• Sling and fastenings were not inspected daily or removed from service when damaged or defective.

• Electrical equipment was not free from hazards that could cause death or serious injury to employees.

Another relative of Rolph worked at Mofab and called her when the accident happened to say it was “really bad.”

“I live in Marion and work in Blackford County,” said Rolph, breaking down into tears as she recalled the day of her brother’s death.

“I went to get our aunt, who is like our mom, and somehow we missed a call from Dondi. We never got that last phone call. We don’t know what he wanted to say.”

Mofab officials said a co-worker, not Edwards, used the cellphone after the accident in an attempt to contact family members.

While the family rushed to Anderson, they were unable to see Edwards before he was transported to an Indianapolis hospital, according to Rolph.

They drove on to Indianapolis, and when they arrived at the hospital they were told that one of Edwards’ legs would have to be amputated and that he had lost a lot of blood.

Rolph said they were told they would see her brother in about 20 minutes. That time had elapsed before two doctors arrived in the waiting room. They informed the family that Edwards’ heart had failed and he was dead.

“They were pumping it (blood) as fast as he was losing it,” Rolph said tearfully.

The family was unaware of any of Mofab’s IOSHA violations released in April.

“I know Dondi loved his job,” Rolph said. “I don’t know what happened. All I know is I lost my brother.”

Rolph said Mofab paid for her brother’s funeral but the family paid for his burial vault.

“He left behind kids, grandkids and a daughter in the military,” Rolph said. “He was my big brother, and it definitely will be different without him.”

A family-owned-and-operated business, Mofab, 1415 Fairview St., employs 55 people and specializes in welding and custom metal fabrication, including the creation of decorative iron gates, fences and other ornamental ironwork.

“We’ve been around here a long time,” said Haines, co-owner of the company. “My grandfather started (Mofab) in 1958.”

Trinkle said Mofab has never had any serious IOSHA violations, no serious injuries and never a death before November 2020.

“It was a tragic accident,” Trinkle said. “He was a part of our Mofab family.”

Trinkle said Sam Bartels, also injured in the November 2020 accident, suffered a serious arm injury but is expected to make a full recovery. The company, Trinkle said, looks forward to his return to work at Mofab.

Kyle Kadinger, a safety consultant for Mofab, said the company began working with Elite Safety Services in August 2020 to strengthen its safety program.

“Since that time, Elite Safety Services has assisted Mofab in completing employee retraining on a wide variety of safety related topics, reviewing their safety policies and procedures, and completing a thorough review of all equipment in order to enhance their safety program,” Kadinger said in an email.

Trinkle and Kadinger said they plan to attend an informal conference with IOSHA to show what the company has done to address the safety orders issued in regard to the accident.

“Mofab takes all accidents very seriously and continues to extend their sincerest condolences to the family of Dondi Edwards,” Kadinger said.

The Indiana Department of Labor's Occupational Safety and Health Administration (IOSHA) has proposed $46,250 in penalties for safety issues at Mofab:

• Employees used side pull to suspended loads, creating stress on a crane – $7,000

• Employees not kept clear of suspended loads or loads about to be lifted by a sling – $7,000

• Sling(s) and fastenings were not inspected daily or during use and not removed when damaged – $7,000

• Electrical equipment was not free from recognized hazards that were likely to cause death or serious physical harm to employees – $2,500

The complete Safety Order and Notification of Penalty report on Mofab Inc. from the Indiana Department of Labor's Occupational Safety and Health Administration is posted with this article at www.heraldbulletin.com.