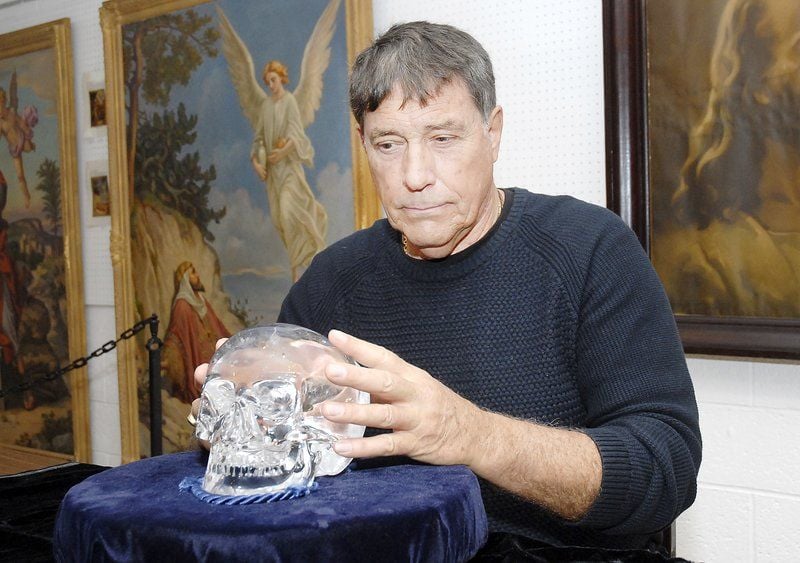 David Humphrey | For The Herald BulletinBill Homann is caretaker of the Mitchell-Hedgers Crystal Skull. 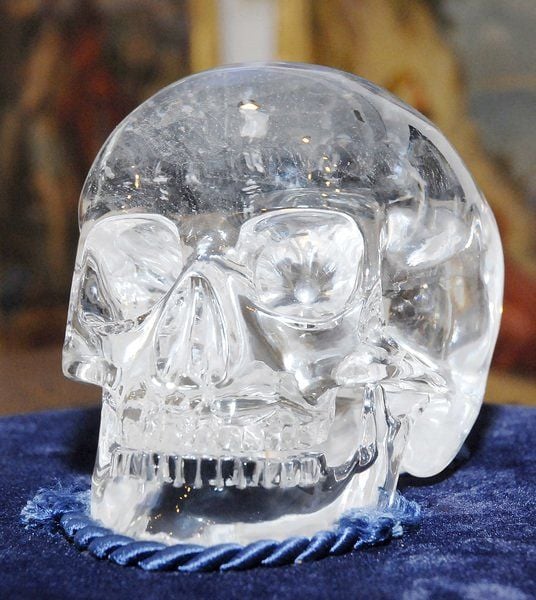 David Humphrey | For The Herald BulletinThe Mitchell-Hedgers Crystal Skull was on display Saturday afternoon at the Hett Art Gallery and Museum at Camp Chesterfield. 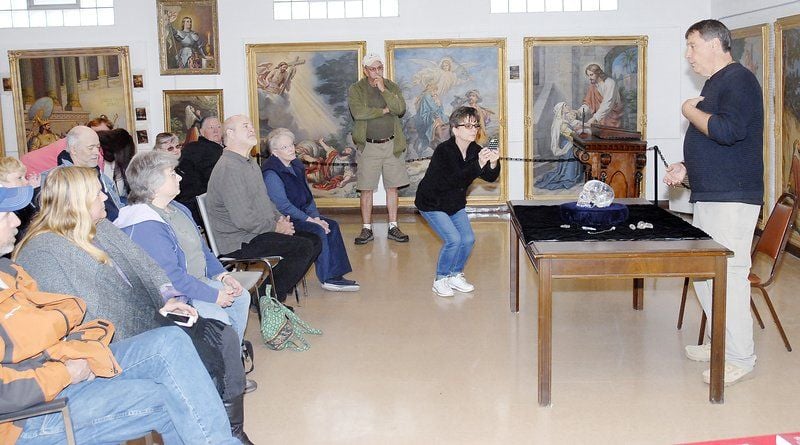 David Humphrey | For The Herald BulletinBill Homann talks about the history of the Crystal Skull while a woman takes a photograph of the historical object.

David Humphrey | For The Herald BulletinBill Homann is caretaker of the Mitchell-Hedgers Crystal Skull.

David Humphrey | For The Herald BulletinThe Mitchell-Hedgers Crystal Skull was on display Saturday afternoon at the Hett Art Gallery and Museum at Camp Chesterfield.

David Humphrey | For The Herald BulletinBill Homann talks about the history of the Crystal Skull while a woman takes a photograph of the historical object.

CHESTERFIELD — It was standing room only for a chance to see and commune with the Mitchell-Hedges Crystal Skull at Camp Chesterfield Saturday.

Around 100 people came to the spiritualist camp in Chesterfield where the skull was being displayed at Hett Art Gallery and Museum.

The crystal was discovered by Anna Mitchell-Hedges, the daughter of explorer and author F.A. Mitchell-Hedges, in a collapsed temple in Lubaantun, Belize, in 1924, according to many accounts.

Bill Homman took over care of the skull after Mitchell-Hedges died in 2007.

The skull in “Indiana Jones and the Kingdom of the Crystal Skull,” in which the famed explorer races against Soviet agents to find a crystal skull, is based on the Mitchell-Hedges skull.

Homman said his job as the skull’s “guardian” is to travel with the skull and allow people who believe in its power to feel its energy.

“I was chosen (by the skull) and my job is doing what I am doing here,” he said as people moved their hands around the skull to sense its energy. “I just think it’s time for it to come out.”

Homman said it is more important now than ever to travel with the skull because he believes now is a time of great change.

“I think it is here now because of this new energy and vibration we are moving through,” he said.

Many different groups believe the skull has myriad mystical powers, including emanating energy, vibrations and a sense of peace; providing healing; and housing a consciousness that lives within the skull. The object also attracts people who believe in crystal-based healing because the skull is said to charge smaller crystals with additional healing abilities.

Stacy Tubbs of Elkhart said she felt a shiver run up and down her spine when she walked into the room with the skull.

“The temperature felt a little colder as I got to it, and that shiver is still with me,” she said about 10 minutes after seeing the skull.

She also said she saw a white rose in the back of the skull that she said symbolized love and peace.

Along with spiritualists and those interested in metaphysics, scientists have also been interested in the skull to discover how it was created, Homman said.

Hewlet-Packard’s crystal laboratory examined the skull in the 1970s and found that it was made from a single piece of stone and that the detachable lower jaw was of the same crystal.

Homman said the skull is one of 13 that were made in Atlantis, a civilization some believe existed in ancient times before sinking to the bottom of the ocean. The city-state was first mentioned by Plato in his work “Timaeus and Critias,” although most scientists and historians believe the story is a cautionary tale against national hubris.

People were invited to participate in a prayer circle at the event that was meant to call upon the energies of all 13 skulls to bring peace and happiness.

Mary Dannon of Fishers said experiencing the skull made her feel a charged tingle across her body.

“I just felt like crying,” she said. “It’s amazing. If you could feel the energy of it you would be amazed.”

Win Srongi, a camp reverend, said hosting the skull helped spread the word about the spiritualist camp, located near the center of Chesterfield.

"It’s great that it’s brought a lot of people out here to the camp," he said.

Camp Chesterfield, where the skull was being shown, was opened in 1891 by a group of Hoosier spiritualists on land owned by Carrol and Emily Bronnenberg.

Spiritualism is a religion that believes death allows a person to pass into a spirit world similar to the physical world. Spiritualists look to speak with those who have passed into the spirit world through mediums.

Believers honor the writings found in the Bible and respect all holy writings because they are “divine attributes proven through mediumship,” according to the camp’s website.