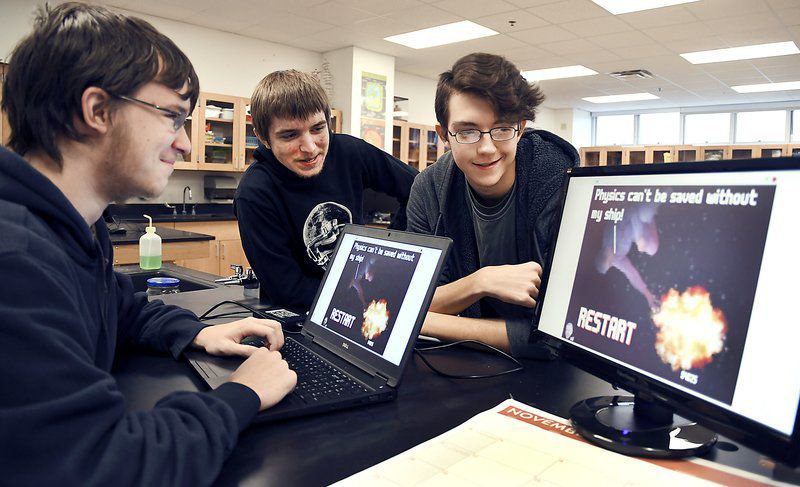 John P. Cleary | The Herald BulletinAnderson High School junior Ethan French, senior Elijah Stamm and sophomore Colin Clark have developed a game app called "Space In Perrel" for their Project Lead the Way class. The game uses a movable laser weapon to demolish invaders and an picture of physics teacher David Perrel changes throughout the playing of the game. 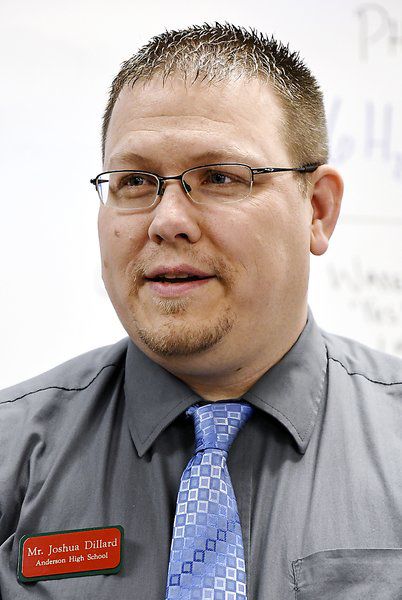 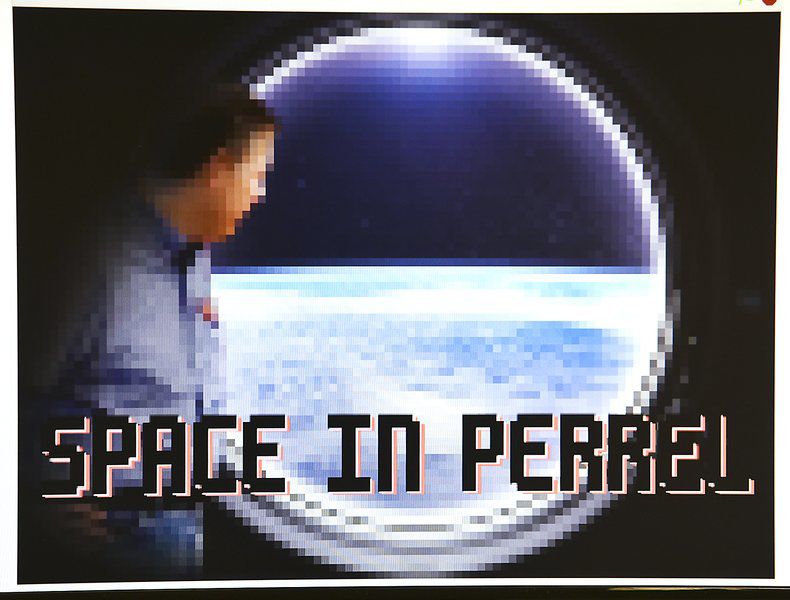 John P. Cleary | The Herald BulletinAnderson High School junior Ethan French, senior Elijah Stamm and sophomore Colin Clark have developed a game app called "Space In Perrel" for their Project Lead the Way class. The game uses a movable laser weapon to demolish invaders and an picture of physics teacher David Perrel changes throughout the playing of the game.

ANDERSON – Given the option for a creative project, three Anderson High School students went beyond what teacher Josh Dillard anticipated.

Dillard is a Project Lead the Way teacher at AHS which utilizes the STEM (science, technology, engineering and math) education requirement for projects.

The students — Colin Clark, 15, sophomore; Ethan French, 16, junior; and Elijah Stamm, 17, senior — had the option of creating a story or a game. They put their collective skills together to create a game app that is similar to arcade games.

The game uses a movable laser weapon to demolish invaders and a picture of physics teacher David Perrel has been added in the corner. Perrel’s image changes throughout the playing of the game.

“One of the things that Project Lead the Way wants to develop is the next level of computer science,” Dillard said. “We want to put out more students capable of using computer science.

“One of the projects was either a story or gaming app,” he said, “that utilized a business model that breaks down a bigger project into smaller manageable items.”

Dillard said they had to use their current level of computer knowledge to collaborate and work together to develop the game or story app.

The students were given 10 class periods to work on the project, but Dillard said the group took the project beyond what was expected.

“They excelled,” he said. “It was stellar work.”

Dillard said they could attempt to sell the app but he doesn’t believe they will ever be done with the project.

“The project was centered around the coding,” he said.

Clark came up with the idea for the gaming app.

“I thought it would be pretty cool to make up a game,” he said.

French said he was the best one when it comes to the coding, coming up with most of it. He said they used the graphics from a free website because of the time constraints for the project.

“This app is about done,” Stamm said. “It’s not marketable.”

Dillard selected the three students to work together on the project.

“We all worked on it separately and shared the information,” Stamm said.

Dillard said the class started with 14 students and had to work in groups of three because of medical emergencies.

“The groups will change with every project,” he said. “I want them to learn to work with other people to develop team collaboration. I didn’t want the students to be working with just one person or a certain group.”

Dillard said he knew the three students had an extensive background but they went above and beyond with the project.

“I hope they take my next class, which is cybersecurity and computer science advanced placement class,” he said.