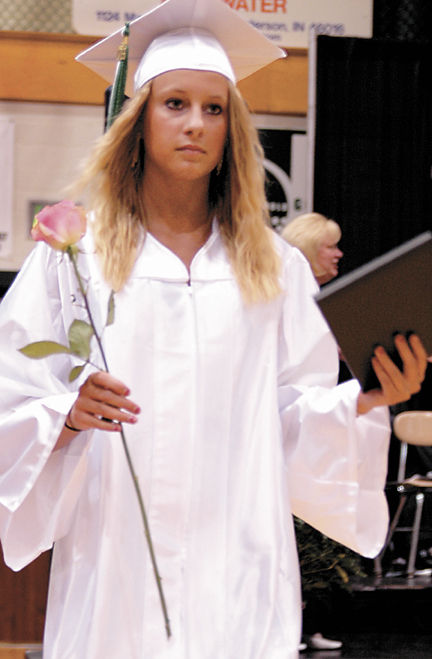 Graduate Kylie Taylor holds a pink rose, the class of 2006 class flower, given to each of the graduates as well as her diploma as she walks back to her seat during the Pendleton Heights graduation ceremony Sunday afternoon. 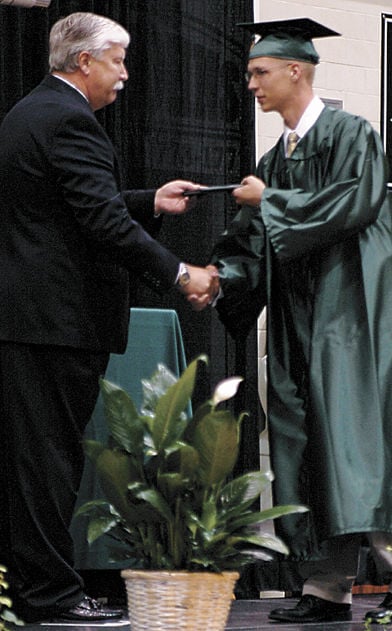 Graduate Kylie Taylor holds a pink rose, the class of 2006 class flower, given to each of the graduates as well as her diploma as she walks back to her seat during the Pendleton Heights graduation ceremony Sunday afternoon.

The National Honor Society, Madison Youth Commission and varsity tennis simply were not enough. Tiffany Zimmerman wanted to start her own extra-curricular activity. Zimmerman founded a chapter of Students Against Drunk Driving (SADD) at Pendleton Heights High School. She even talked her counselor into serving as sponsor. She said attending a small school such as Pendleton affords students more opportunity to create change. “I think there was a great need,” Zimmerman said. “Pendleton is pretty notorious for its alcohol problem, but I see a lot of potential in our students, things that I think other people skip. “Because I go to Pendleton, a smaller school, I got a lot of opportunities like that. Looking back, I’m very glad about that.” Zimmerman plans to attend IUPUI next season and study business administration with a focus on not-for-profit organizations. In January, however, she will move to Cincinnati to attend a Bible study program through the United Church of God in Greenwood. As senior class sponsor along with Lori Ave, Kathy McCord said Zimmerman’s personality made her an effective leader. “She’s just one of those outstanding seniors,” McCord said. “She has a bubbly personality and she never fails to greet a stranger. She’s just great, all around.” McCord and Ave advised the class of 2006 for four years, from the first day of their freshman year to the last day of class on May 31. Zimmerman was not surprised to learn of her reputation as Miss Congeniality. She was voted most outgoing and prom queen by her classmates. In addition to SADD, Zimmerman served as vice president of the National Honor Society, she belonged to the South Madison Youth Commission, the Spanish National Honor Society, Spanish Club, Outdoor Adventure Club, Sunshine Society and Beta. She also played on the varsity tennis team for two years. Her senior year has also been an award-winning one for Zimmerman. She received the Character Counts and PHHS Citizenship awards, along with the Dean of Faculties Scholarship and IUPUI. She may be pursuing business, but Zimmerman said she also has a strong creative side. “I’m an English nerd, I’m one of those girls,” she said. “I just got done with a creative writing class and we were given a bag of clues and had to write a murder-mystery play. It really pushed you to your limits, creatively.” Zimmerman finished with an A-minus grade-point average, placing 23rd among her classmates at Pendleton, but she said family life, not academics or business, is her real goal. “I’m a family girl and I would really like to be a mom in the future and volunteer,” she said. “Business administration is such a great mom job because a lot of organizations can work through the home. That’s what I’ve always wanted.” The chapter of SADD she created will live on after Zimmerman graduates and she said the future of the group depends on those who will come after. “We just started in the fall and we’re already working with other schools to get them on their feet,” Zimmerman said. “It’s been one of those trial years where you’re just trying to get yourself and you don’t always get down to the real work. That’s up to the next group.”