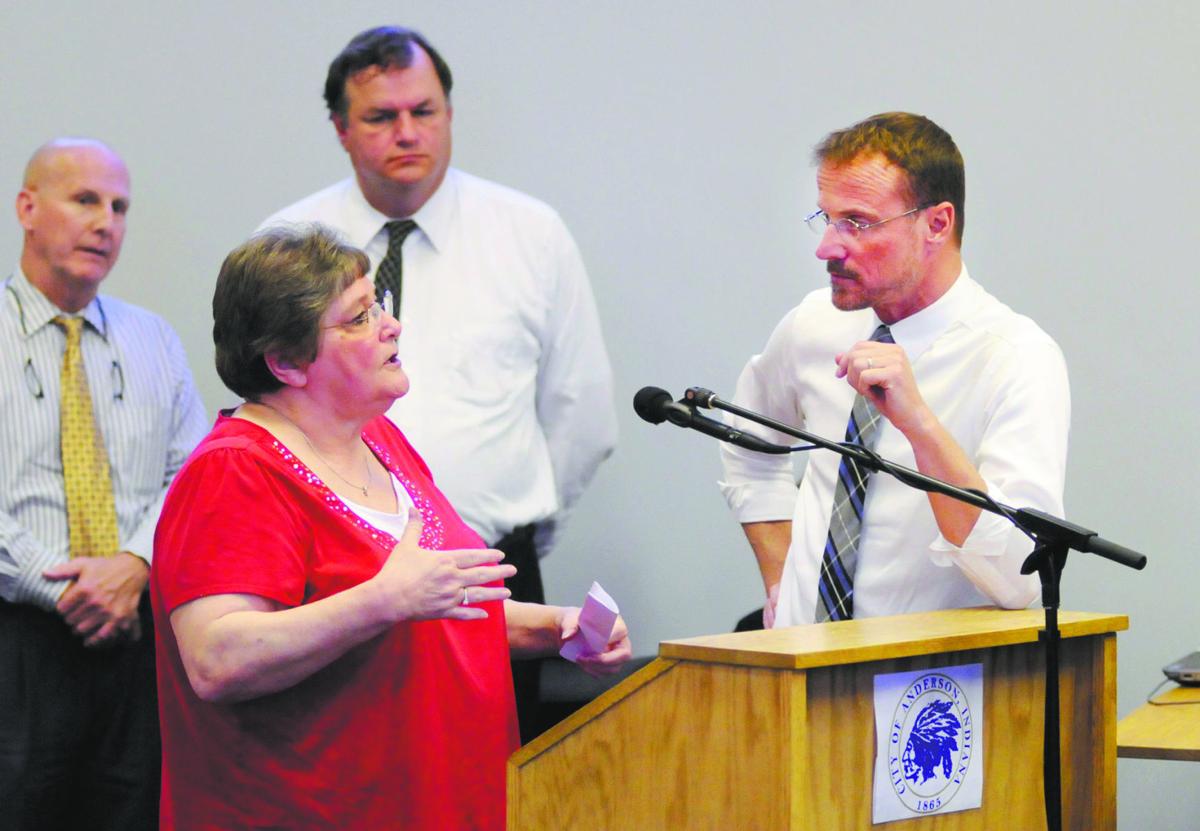 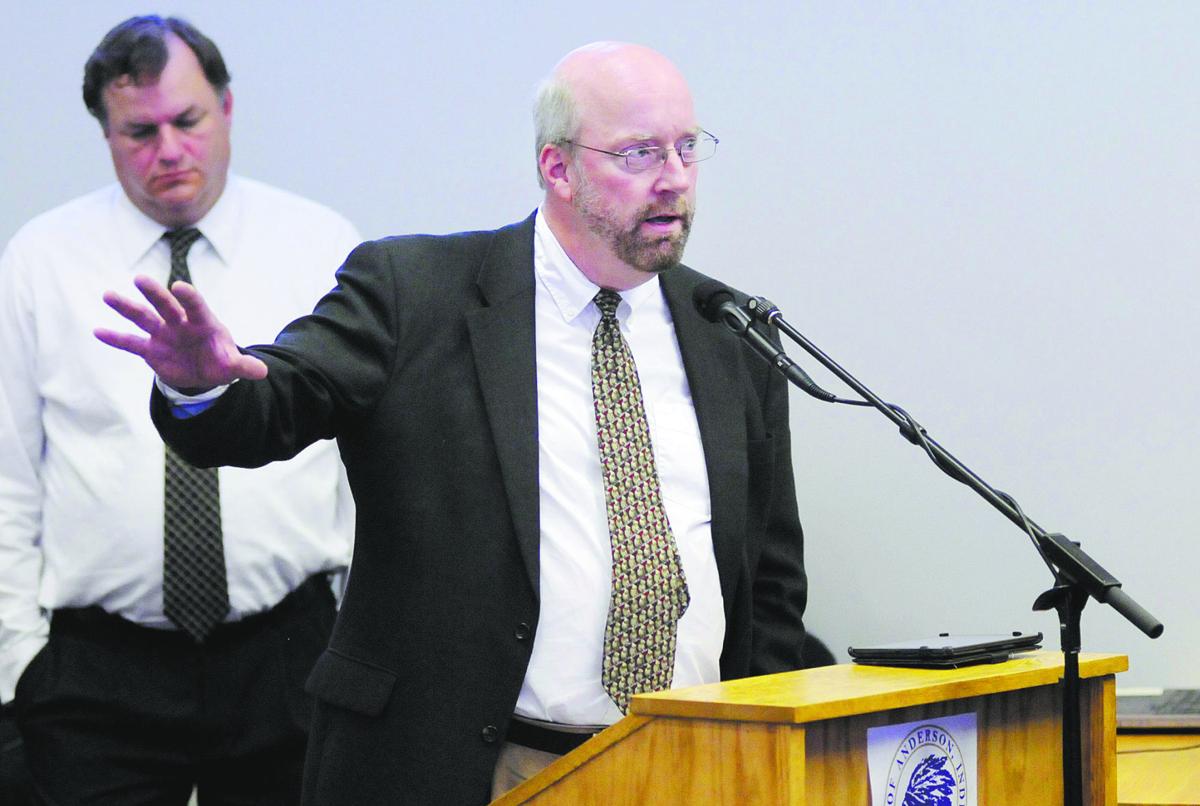 Eric Dannenmaier, a IU law professor and environmental lawyer, recommends that the Anderson City Council table the ordinance to join the Mounds Lake Commission until legal questions about the project are answered. 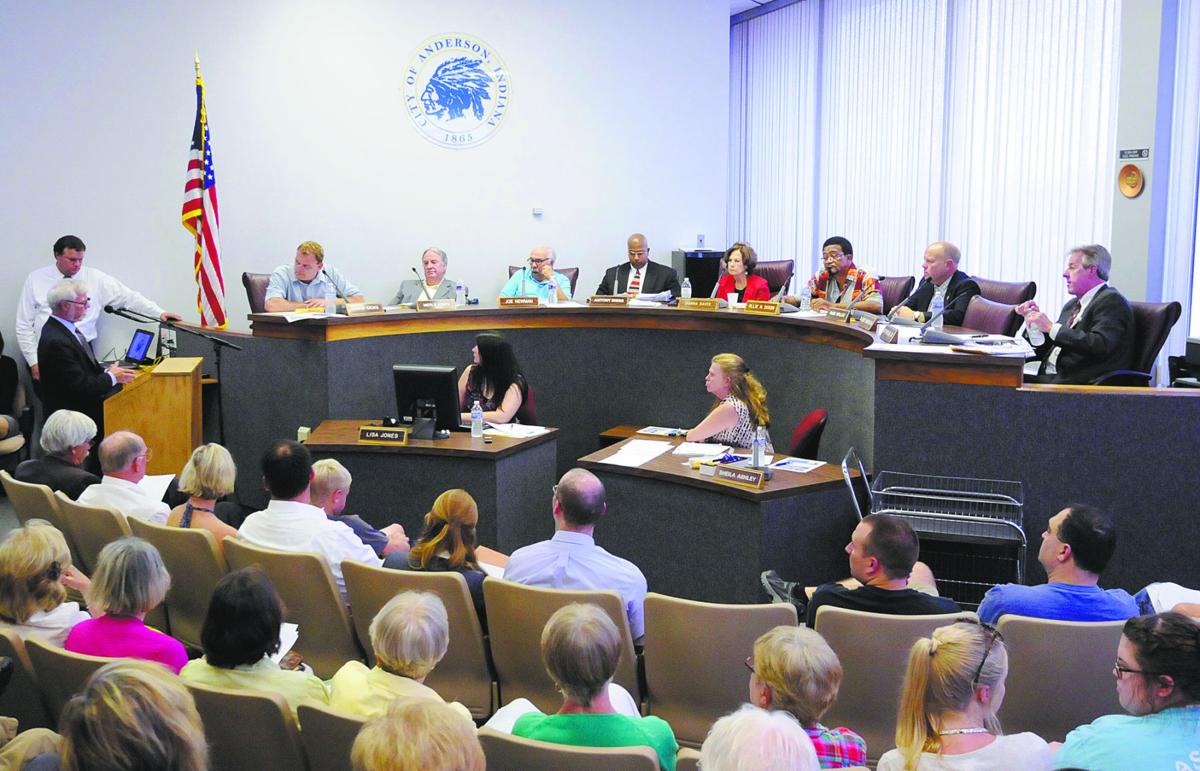 In June 2015, Anderson City Council attorney Tim Lanane explains the amendments to an ordinance for the city to join the Mounds Lake Commission. Thursday night, the council passed on two of three readings an ordinance that would extend protection against discrimination to gay, lesbian, bisexual and transgender people in Anderson. The third and final vote on the ordinance is set for Dec. 10.

Eric Dannenmaier, a IU law professor and environmental lawyer, recommends that the Anderson City Council table the ordinance to join the Mounds Lake Commission until legal questions about the project are answered.

In June 2015, Anderson City Council attorney Tim Lanane explains the amendments to an ordinance for the city to join the Mounds Lake Commission. Thursday night, the council passed on two of three readings an ordinance that would extend protection against discrimination to gay, lesbian, bisexual and transgender people in Anderson. The third and final vote on the ordinance is set for Dec. 10.

ANDERSON — To a round of applause from supporters, the Anderson City Council voted Thursday night to join the proposed Mounds Lake Commission.

Following two hours of at times emotional public comment before a full house, the council approved an ordinance to join the Mounds Lake Commission that will determine if the reservoir project is feasible. It passed through the final two readings by identical 7-1 votes.

Before the vote, Councilman Ollie H. Dixon, D-4th District, made a motion to table the ordinance, but it failed for a lack of a second. Dixon was the lone no vote on the council.

Anderson is the first government entity to vote to join the commission, which could include the towns of Chesterfield, Daleville and Yorktown. The town councils in those three communities have not set a date to consider participating in the Mounds Lake Commission, awaiting a decision in Anderson.

As proposed, the Mounds Reservoir would create a 2,100-acre lake that would extend from Anderson to Yorktown. If formed, the Mounds Lake Commission is expected to undertake a Phase 3 feasibility study at an estimated cost of $28 million.

Councilman Ty Bibbs, D-at large, who voted no on the first reading of the ordinance on May 28, voted yes after several amendments were approved.

The amendments removed the word construction from the title and several more references to construction in the ordinance; before any construction can start on the reservoir, it has to be approved through another ordinance adopted by the city and town councils; and zoning changes and incentives for the project remain with the government entities.

Dixon raised several concerns that if the reservoir project went bankrupt the taxpayers would be responsible for the costs.

Anderson City Attorney Tim Lanane said the project is to be funded through revenues generated by the reservoir and added it was possible taxpayers will be asked to provide funding.

“That would be up to the council to decide on how to use revenues,” he said.

Councilman David Eicks, D-at large, said the Mounds Lake Commission has to fund itself. “The formation of the commission allows the project to move forward if it’s viable.”

Rob Sparks, representing the reservoir project, said there is no obligation of the local communities to provide funding.

Sparks said the commission will consist of elected officials to protect taxpayers and property owners in the four communities.

“This won’t be built on the back of the residents,” he said. “The commission has no taxing or bonding authority.”

Sparks said supporters believe this is a viable project, but there are a lot more steps before it ever goes to a construction phase.

“There are eight federal and state laws that have to be hurdled before the project is permitted,” he said. “You should answer the legal questions before the commission is formed. There are serious legal problems.”

Dannenmaier said the state and federal agencies sent letters that were not an endorsement of the project but raised many questions.

“Eventually we will need water in this state,” he said. “Is this the best way? We don’t know how much water is needed by whom?

Dam litigation is expensive, he warned. Dannenmaier said if an attempt is made to flood the Mounds Fen nature preserve there will be litigation.

“This has divided the community,” he said. “I hope there are some open minds.”

Irondale resident Sue Scott, an opponent of the project, said she resides in a house her grandparents built in 1933. She said when that house burned neighbors helped construct a new home.

"We still have a sense of caring for each other," she said. "The reservoir has disrupted our lives. We don't know if we should make improvements or if our property values will decline. We're hanging in limbo."

Sparks said all the property owners and renters will be treated on a federal base line and believes there is a solution for everyone.

He said Scott and area residents will learn answers to the many concerns expressed by reservoir opponents during the Phase 3 study.

Kellie Kelley, speaking in support of the reservoir, said she lives and works in a city in decline and that decisions have to be made for future generations of Anderson residents.

She asked the council to vote to let the process proceed to determine if the reservoir is viable.

"If the buck stops here, that would be a shame," Kelley said. "Don't let folks from other communities make decisions on what could be very good for our community."

In addition to those in council chambers, there were about 40 people in an overflow area in the auditorium.

Among them was Anderson resident Don Ferguson, who had mixed feelings about the project.

"I think it's going to happen. Nothing is going to stop it," he said.

"The main thing the residents of Anderson need to understand is this isn't for us. This water is for the use of Indianapolis," he said.

"I hope we do the research to do the best thing we can to take advantage of this for the welfare of our own city — I don't know what — but we definitely need a kickstart."

There was a lot of promise and fears in the proposal to turn 2,100 acres along the White River into Mounds Lake, a reservoir that would quench…