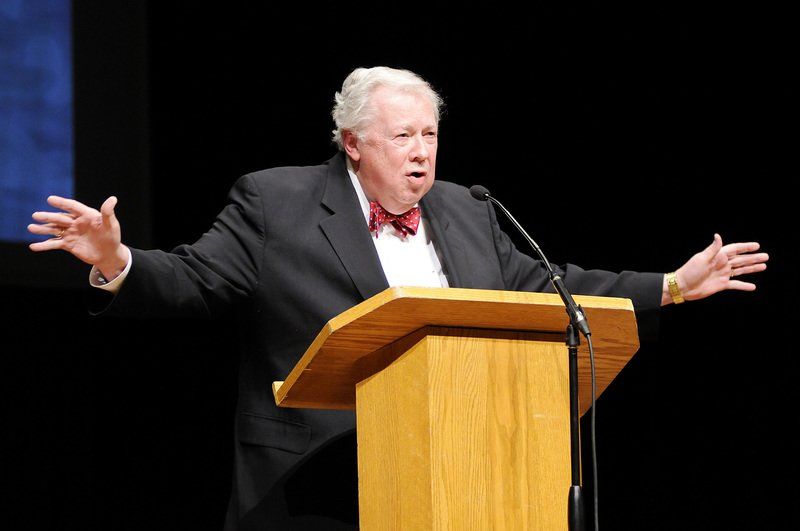 Don Knight | The Herald Bulletin Anderson University President James Edwards relates the lessons he's learned from students during his 25 years as president during his final campuswide chapel service in Reardon Auditorium on Thursday. 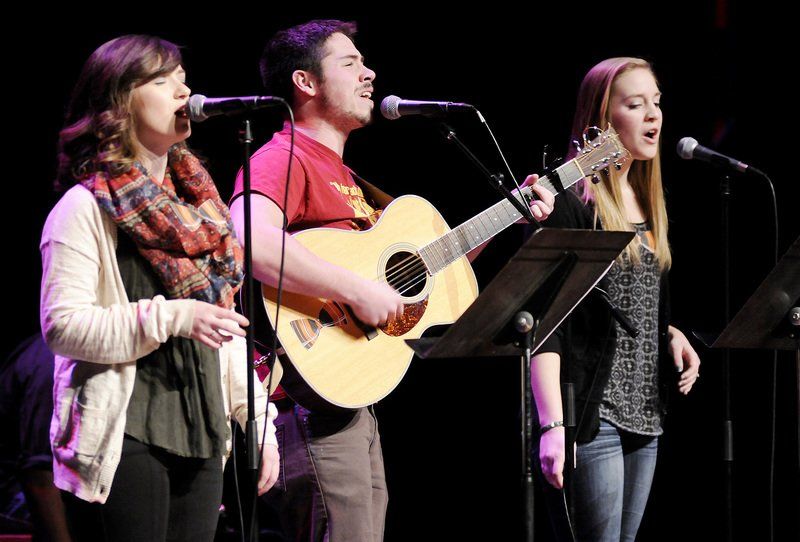 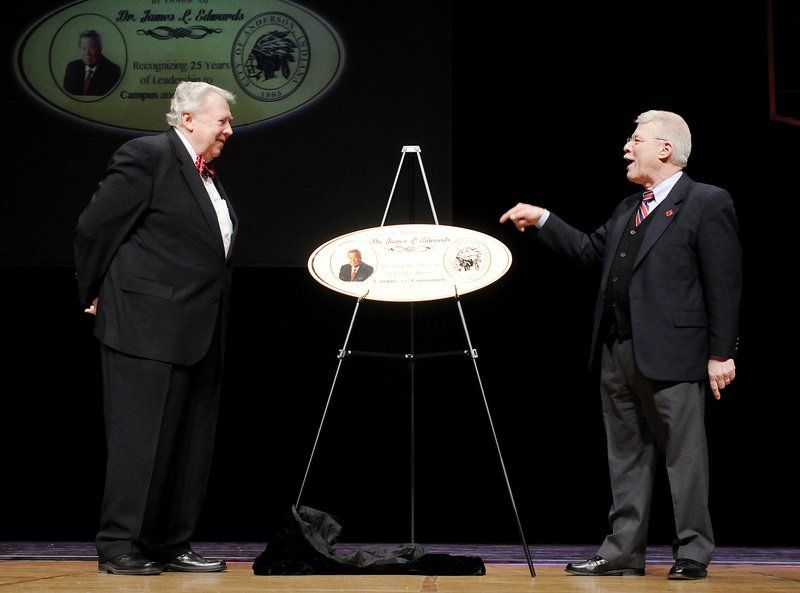 Don Knight | The Herald Bulletin Anderson University President James Edwards relates the lessons he's learned from students during his 25 years as president during his final campuswide chapel service in Reardon Auditorium on Thursday.

ANDERSON — Mixing humor with humility during his final campuswide chapel service on Thursday, James Edwards paid homage to the students and staff who have inspired and energized him over the past 25 years.

Anderson University's Reardon Auditorium was packed with students and staff for his final "P. Eddy Chapel."

As they filed in, Isaac Donnell and other students busily handed out paper black and orange bow ties with the tagline: Leader. Legend. Raven.

"It's the symbol we've adopted for the final few weeks of tribute ... We're just trying to say thanks to him for 25 great years of service," Donnell explained. "He's got a really great sense of humor and hopefully he'll think this a good thing for the day."

Edwards got the joke, of course.

"I can tell you, there are few presidents in this country who've been able to be so honored that students would think that I could be a rapper like P. Diddy," Edwards said to laughter and applause.

Before chapel, several students talked about what they hoped Edwards would say.

"If anything I want to hear his favorite memories of being here ... what we've done to impact his life," said Kati Persons, a nursing major. "And if some tears are shed I wouldn't mind. Tears always make things more memorable, I think."

He recalled, for example, the time two young men showed up at his door with towels under their arms.

There was no hot water in the dormitory, they said. Could they use his shower? Edwards recalled them asking.

"It was a very tender moment," Edwards said.  "I was convinced they hadn't had many showers in their lives. I was also convinced they weren't going to have one in my house on that day."

He told the boys to go see their resident director, and if he returned them, they could have their shower.

They didn't. And Edwards thought the episode was over.

Until one boy's parent called and was surprised Edwards hadn't let them in. He would have, Edwards recalled the parent saying.

Taking a more serious tone, Edwards told students that failure is common in life and on a college campus.

Edwards was referring to a chapel eight years ago, just a few weeks after learning that his oldest granddaughter had been diagnosed with leukemia. Six months earlier, her father was diagnosed with chronic myelogenous leukemia.

"I got emotional like I am today, and we got real with each other. That was eight years ago. She just celebrated five years cancer free," he said to thunderous applause.

"What I remember is after I shared those very personal words ... students lined up to tell me their story," Edwards said.

"'I had that as a kid,'" he recalled one student telling him. "'If you ever want to talk to somebody, I'll be here for you.' Isn't that incredible?

"This has been a great place to learn about growing, overcoming, getting it done, being real, and I've loved it," Edwards said. "We have loved it so very much. We have to say thank you. That's the only word I can come up with."

Before Edwards spoke, former students and staff shared their own special Edwards memories in a short video presentation.

"I can't tell you how vital the relationship is between AU and the city," Smith said. "And that relationship has only been strengthened by having President and Mrs. (Deanna) Edwards here running this university. These are folks that have absolutely immersed themselves in the city of Anderson as well as Anderson University."

Earlier in the day, Edwards spoke on the topic of inspiration at the Madison County Chamber of Commerce Wake Up! Breakfast.

And last night the Leadership Academy of Madison County presented Edwards and his wife with that organization's 2015 Servant Leader Award.

Where: Reardon Auditorium on the Anderson University campus

Native of Maryland who moved to Indiana 20 years ago. I've covered every news beat imaginable over a long career as an editor and reporter. I am currently the courts reporter for The Herald Bulletin.