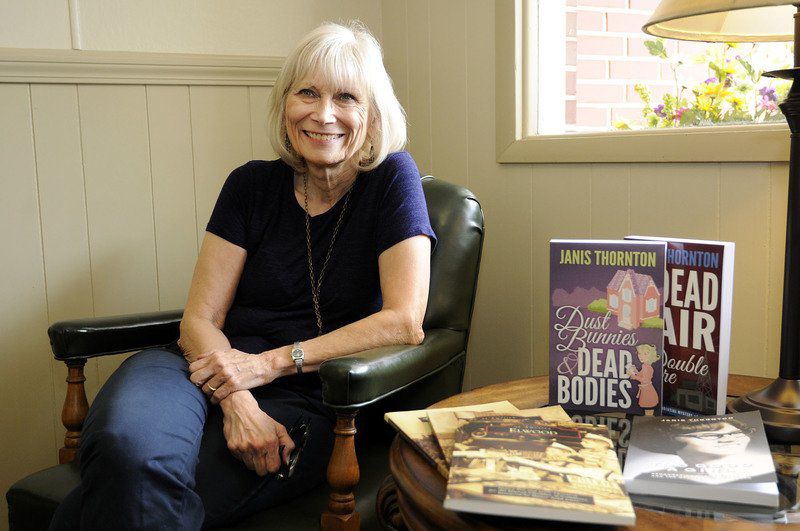 Don Knight | The Herald BulletinJanis Thornton is an author of mystery books and the office manager at the Elwood Chamber of Commerce. Thornton helped write the recently released pictorial history of Elwood. 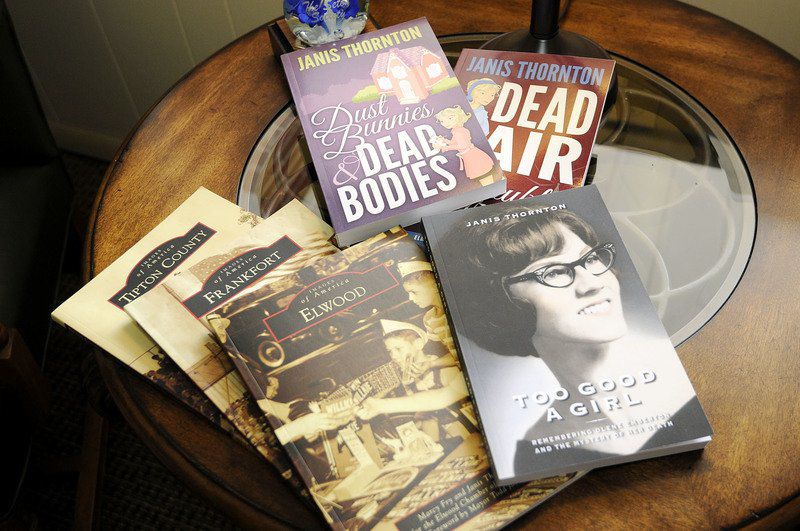 Don Knight | The Herald BulletinJanis Thornton is an author of mystery books and the office manager at the Elwood Chamber of Commerce. Thornton helped write the recently released pictorial history of Elwood.

ELWOOD – On Oct. 16, 1965, Janis Thornton’s Tipton High School classmate, Olene Emberton, had dropped off a date late in the evening. Emberton’s brother found her car parked halfway between the six blocks from her date’s house to her own, and her nude body was found the next day at the side of the road.

After taking a criminology class in the mid-1980s, Thornton, a former journalist who now serves as office manager at the Elwood Chamber of Commerce, shared with her family her desire to write a book about the case.

“They told me what a stupid idea it was. My dad said leave it alone.”

Thornton, who most recently co-wrote the pictorial history book, “Images of America: Elwood,” with Elwood Chamber of Commerce Executive Director Marcy Fry, didn’t take her father’s advice. After more than a decade in the works, she late last year published “Too Good a Girl,” focusing on the cold case that rocked the community where she grew up.

The 1966 graduate of Tipton High School was born in Muncie, the only child of Bill Thornton, a rate clerk for the Nickel Plate Railroad, and his wife, June, who worked for the Tipton Telephone Co. and was president of the national Gene Autry Fan Club.

“He was involved with that, so we got to know him,” Thornton said of the “The Singing Cowboy.”

A self-described nerd, Thornton said she loved going to movies and Broadway musicals.

“I wasn’t a cheerleader type. I had a different way of looking at things that made me seem like a nerd, but that’s really helpful now as an adult,” she said. “I’d get the big records, you know, the big 78s from the library, and bring them home. I learned the words to all the Broadway musicals.”

Rather than attending college, Thornton did what many young ladies of her era did: attend charm school in Columbus, Ohio.

“It was a shortcut. I wanted to do public relations and advertising,” she said. “I learned how to stand properly and never cross my legs.”

“I used to have this thing about movie stars and Hollywood,” she said.

While there, she continued her education at a junior college starting in 1978 and finally earned a degree in general studies at Indiana University-Kokomo in 2002 after returning to Indiana in 1993 to raise her only child, Matt Geas.

“I wanted him to have somewhat the childhood I had,” she said. “I always knew I wanted him to grow up here instead of L.A. I thought I would lose my mind worrying about him, sending him off to school there.”

After having some trouble finding a job, Thornton was hired as a secretary at St. Luke United Methodist Church in Indianapolis. It wasn’t long before she was able to realize her career goal there.

Seven years later, however, Thornton took a journalism class in Kokomo with Indiana Journalism Hall of Famer Raymond Moscowitz, who was known for taking promising students under his wing.

“He picked me out and thought I had ability,” she said. “I told him I thought I was a little old to start a new career. He said, ‘That’s OK because you’ve got something the kids coming out of J school don’t have. You have experience.’”

So at mid-life, Thornton switched careers, becoming a features writer and copy editor at the Frankfort Times.

At 40, Thornton also had taken an adult evening class on fiction writing.

“I was hooked. It was the first time I was writing through the experience and voice of another person,” she said.

In 2014, she published the cozy, “Dust Bunnies and Dead Bodies,” the first of three mystery books. Three years later, she published “Dead Air and Double Dare” and “Love, Lies and Azure Eyes.”

“I wanted to write about a murder,” she said. “When I found a publisher, they wanted to tone it down to a cozy, so they changed it and softened some things. I had some four-letter words and blood.”

But there was one story that always haunted Thornton, a true crime cold case from her teenage years.

The autopsy on Emberton was inconclusive, with the coroner saying that according to the condition of her body, she should have been alive to tell what happened to her.

With the skills she learned in a criminology class and as a journalist, Thornton dug in about 2007. She called Emberton’s family and friends and hunted down the investigating officers.

At first, Emberton’s mother asked her not to publish the book, so it gathered dust until a couple of years ago when the last surviving member of the family gave the green light.

Even with all of Thornton’s work, the case remains unsolved.

“I didn’t write the book to solve it. I wrote it so we never forget,” she said. “I have my theory. I wanted the readers to make up their own minds.”

Thornton also wrote the book to start the Olene Emberton Memorial Community Grantmaking Fund through the Tipton Community Foundation. Anyone who contributed $100 received a free copy of “Too Good a Girl,” which raised nearly $43,000, including matching grants.

“I didn’t want to make money on this book. It was too personal, too tragic,” she said. “It feels good to turn something so tragic into something good.”

Fry, who hired Thornton three years ago, said her real title should be “Director of First Impressions.”

“When she interviewed it was just her personality and her background, and we just hit it off. You just run into people that you talk to and feel like you’ve been friends for life,” she said. “When people come in, she’s the first person that they meet. She has an amazing personality that is warm and welcoming when they come into the Chamber.”

Recently, the two collaborated on the pictorial history book “Images of America: Elwood.”

“Even though she lives in Tipton, she really has grounded herself in Elwood,” Fry said. “Not only does she work here, she took it on to learn about the community.”

Thornton’s skills as a writer and in public relations and social media also have been a bonus when it comes to promoting the chamber’s events, she said.

“She’s into all that social media stuff. She knows how to go online and grab those people. We are blessed to have her right here with us.”

Dixie Ihnat, who was quoted in “Too Good a Girl,” has been friends with Thornton since middle school.

”The last four or five years we talk constantly and go places and have rekindled our old friendship,” she said. “She’s involved. She’s the one who plans the get-togethers for the people we went to school with. She’s one of those people that goes to plays, going to movies, that’s her forte. We do Beef and Boards. She enjoys that a great deal.”

Ihnat described Thornton as humble about her accomplishments.

“She doesn’t want a lot of acclaim for the things that she does,” she said. “She has a real talent.”

Janis Thornton’s next book, “No Place Like Murder,” a compilation of historic true crime stories that happened between 1869 and 1950, is scheduled to be published in 2020 by Indiana University Press.