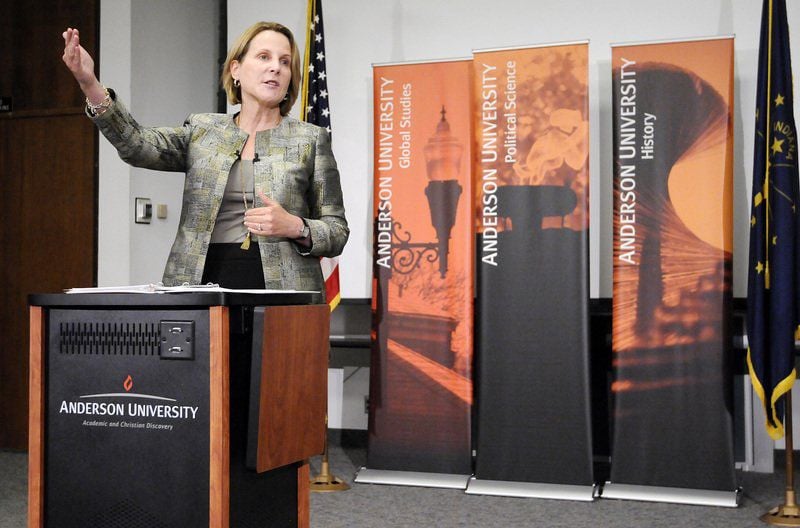 Don Knight | The Herald BulletinAlice C. Hill, a retired judge and former senior director for resilience policy at the National Security Council, talks to students about how climate change increases security risks during a visit to Anderson University on Wednesday. 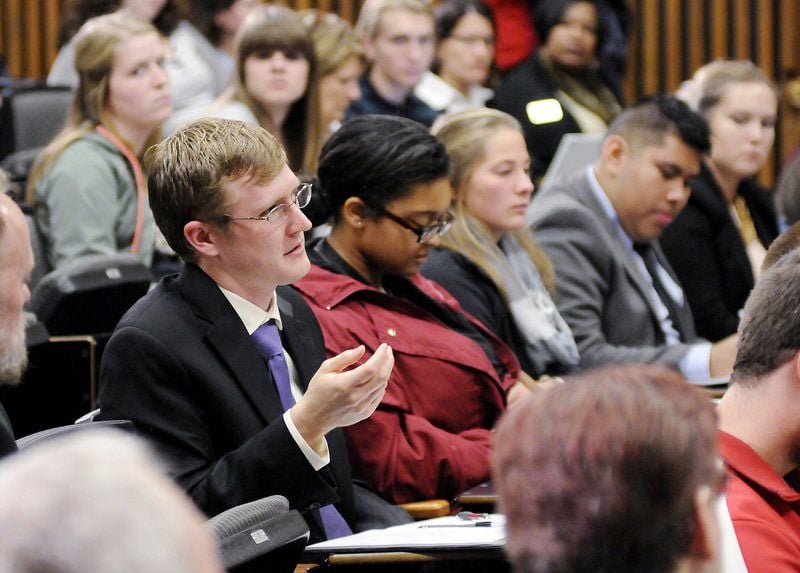 Don Knight | The Herald BulletinAlice C. Hill, a retired judge and former senior director for resilience policy at the National Security Council, talks to students about how climate change increases security risks during a visit to Anderson University on Wednesday.

ANDERSON – The security of Madison County and Indiana may be vulnerable to natural disasters caused by global warming, a former adviser to President Barack Obama told an audience of students and faculty at Anderson University.

Alice Hill told about 100 people on Wednesday that Indiana is poised to see significant climate effects on its cities, farms and forests.

“This is right here where you live,” she said.

Until Tuesday, the retired judge was special assistant to the president and senior director for resilience policy at the National Security Council, White House. She now will work for the Hoover Institution, a think tank based at Stanford University.

Hill is the latest in a series of high-powered national defense experts brought to the campus by AU President John Pistole, a former administrator of the U.S. Transportation Security Administration and a former deputy director of the Federal Bureau of Investigation.

Pistole has used his connections to bring Paul N. Stockton, managing director of Washington, D.C.-based Sonecon, LLC , and former assistant secretary of defense for Homeland Defense, and deputy secretary of the Office of Homeland Security Alejandro Mayorkas to the university.

As Pistole introduced her to the audience, he said one measure of Hill’s effectiveness is the seven executive orders in which she personally had a hand.

“One of the ways you know someone in Washington, D.C., is effective is by their outcomes,” he said.

Hill said global warming likely can have a destabilizing effect on the American way of life.

“Let me make clear, the risks to our environment are a risk to our nation,” she said.

Superstorm Sandy also demonstrated how difficult planning for future disasters can be, Hill said. She said New York City planners predicted up to 8 feet of water and established standards for handling up to 12 feet, but Sandy dumped 14 feet onto the city.

“When it came in, it went right over the barriers that we had put up,” she said.

Not only were the subways and Lincoln Tunnel flooded, Hill said, the storm took out the electrical grid, which is vital to pump fuel to transport first responders.

In the past, officials used computer modeling to predict the possible effects of disasters, Hill said, but over the decades they have been able to use actual data. Even so, she said, history may not be enough to predict future consequences of global warming.

“When we have these cascading failures, it greatly impacts our economic prosperity,” she said.

As Pistole introduced Hill, he noted her advocacy of women and children victimized by human trafficking.

“I think the other problem President Pistole talked about – human trafficking – will be exacerbated because more people will be on the move,” she said.