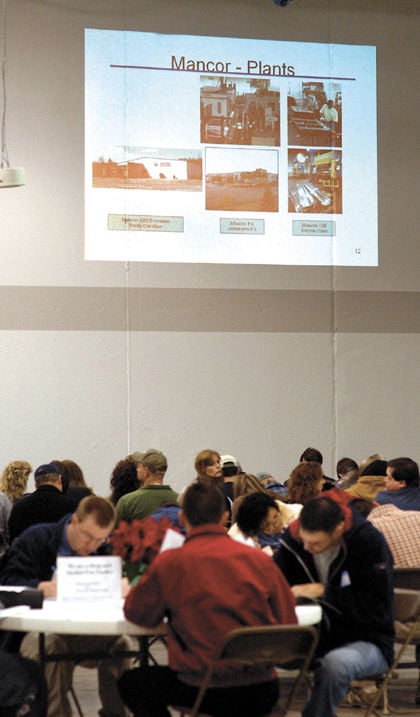 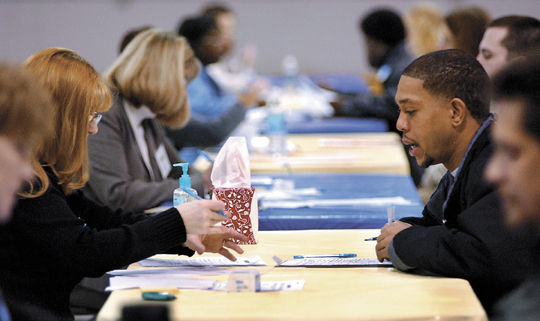 Job applicant Eric Williams, right, answers questions while being interviewed by Mancor representative Waneta Key as other applicants go through their interview during Wednesday's job fair.

Job applicant Eric Williams, right, answers questions while being interviewed by Mancor representative Waneta Key as other applicants go through their interview during Wednesday's job fair.

The parking lot at Mancor Industries headquarters was filling up quickly in the early morning Wednesday with applicants hoping to land one of the 80 positions at the one-day job fair. Mancor was accepting applications and interviewing for a number of positions including management, quality assurance Inspectors, CNC machine operators and others. Jazzelyn Collins waited for her opportunity since she arrived at the parking lot at 6:30 a.m. and wanted to make sure she got an early start after experiencing another job fair. “I attended a job fair in Indianapolis and I learned a lesson,” Collins pointed out. “The job fair was to start at 8 a.m. and about an hour before that there were already at least a 1,000 people in line. By the time the job fair was to start job seekers were getting turned away.” Collins was prepared with resumes and references for when the doors were to open at 10 a.m. She was hoping to shorten her commute to her present job with landing one of the positions at Mancor. “If I am able to get one of the jobs, I will be able to save money on gas and maintenance to my car,” Collins said. “I am pretty excited that Anderson is getting some more jobs with wages that people can live on.” Wayne Williams came to Anderson nine years ago from Mississippi and worked at the same plant when it was called American Way for Delco Remy America. He plans to take a buyout from Ford Motor Co. in Indianapolis early next year and was anxious for the job fair to start. “When I decided to transfer here nine years ago, I was assured that there would be jobs for not only myself but for my grandchildren,” Williams said. Many of the applicants were enticed by an opportunity and a shorter commute. David Upchurch from Frankton, was one of the prospective employees looking for both. Upchurch said he was one of 50 people who lost his job due to cuts at Standard Lock Nut in Westfield. He was optimistic his background of manufacturing for 10 years and in quality assurance for three years would increase his opportunity. “I am hopeful that through sending in a resume last week and by coming out today they will see that I am really interested in one of these jobs,” Upchurch said. Dave Koesters, human resources manager for Mancor, figured by early afternoon they had received 500 applicants. Mancor had 12 representatives on site conducting interviews with the steady flow of job seekers. “Everything is going great so far,” Koesters said. “Everyone is being handled very effectively and I wouldn’t be surprised by the end of day if we finished with around 1,000 applicants.”