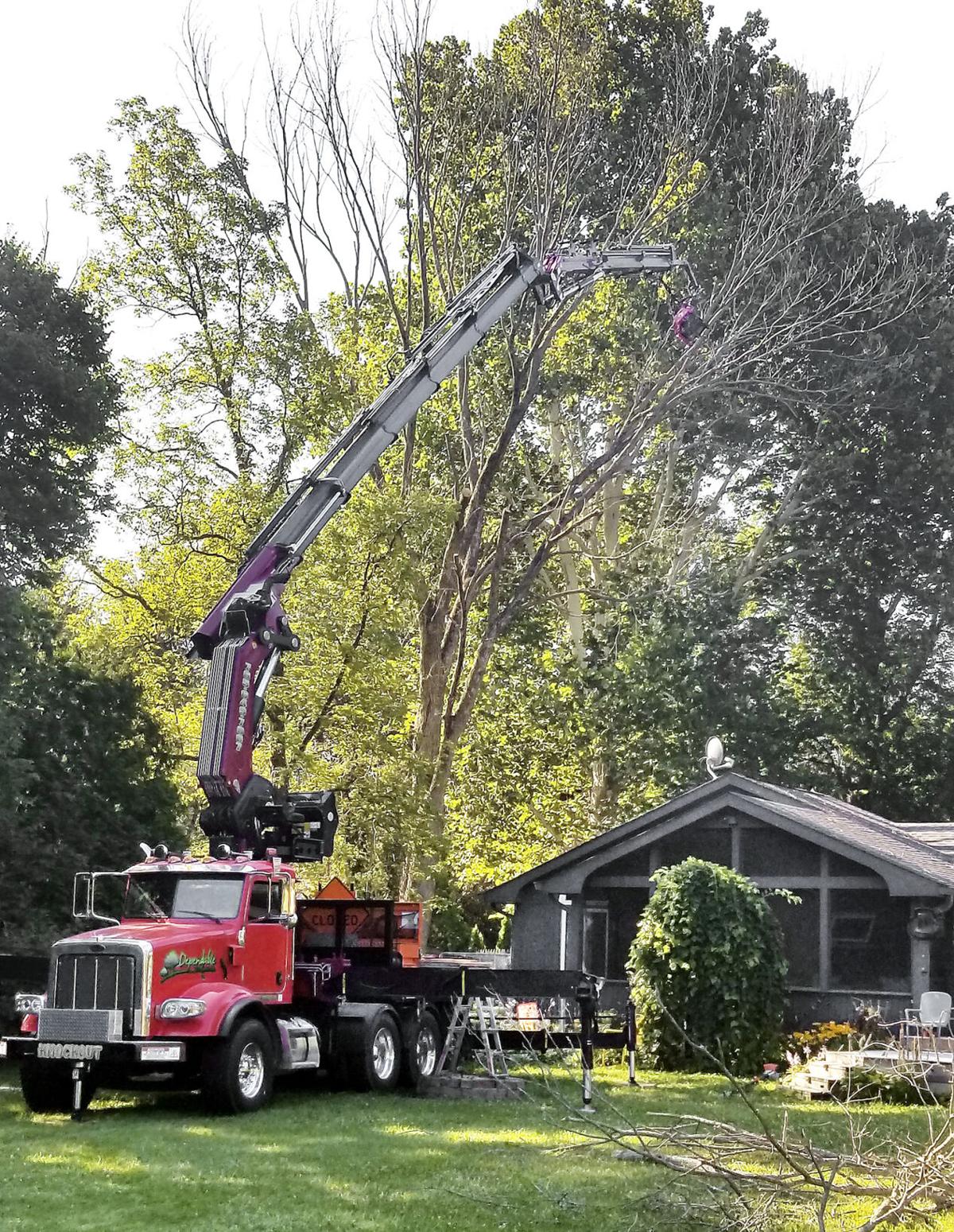 Workers with Dependable Tree Service in Markleville remove limbs from the upper canopy of a dead elm tree near a house in Anderson. Thinning canopies are a common sign of Dutch elm and other diseases in trees, according to forestry experts and landscape professionals. 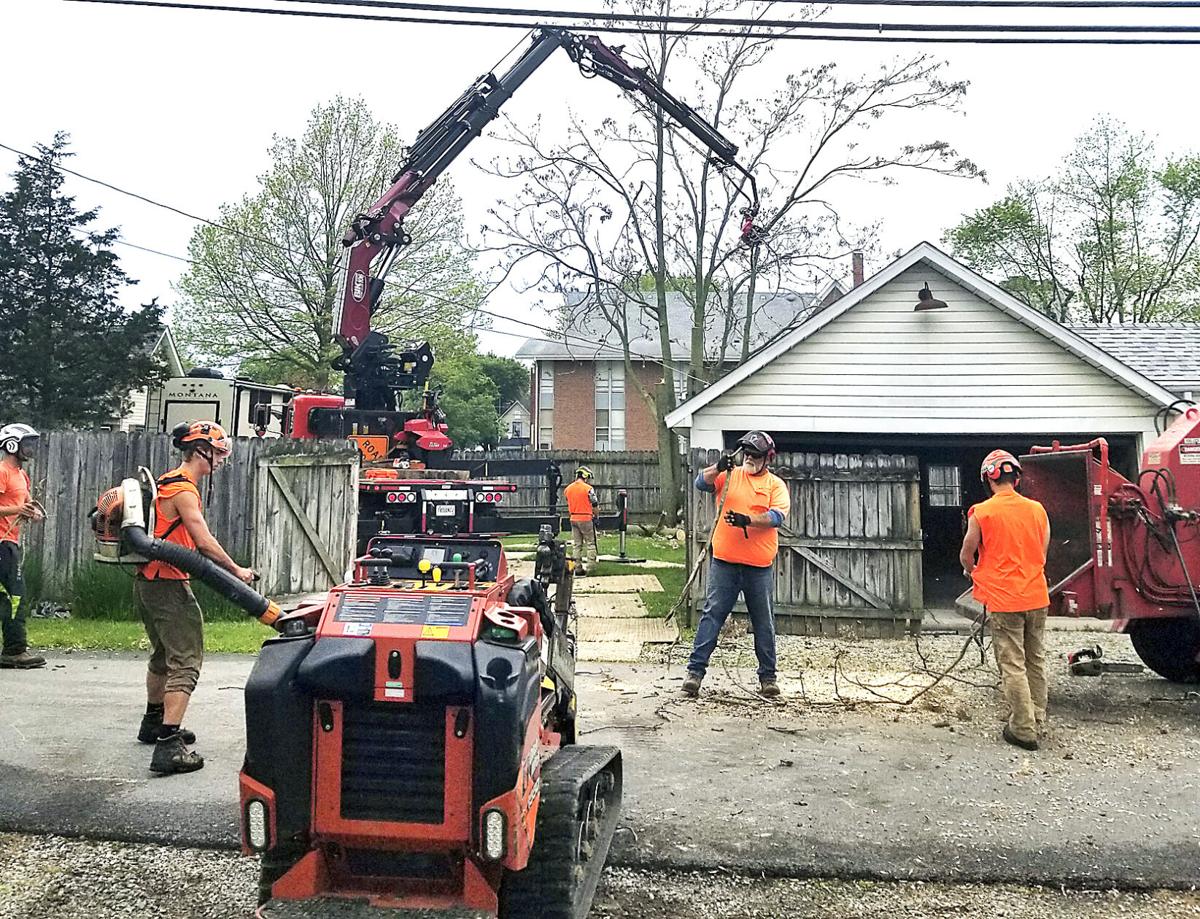 Workers from Dependable Tree Service use a saw and crane to remove a tree from a property in Lapel in May. 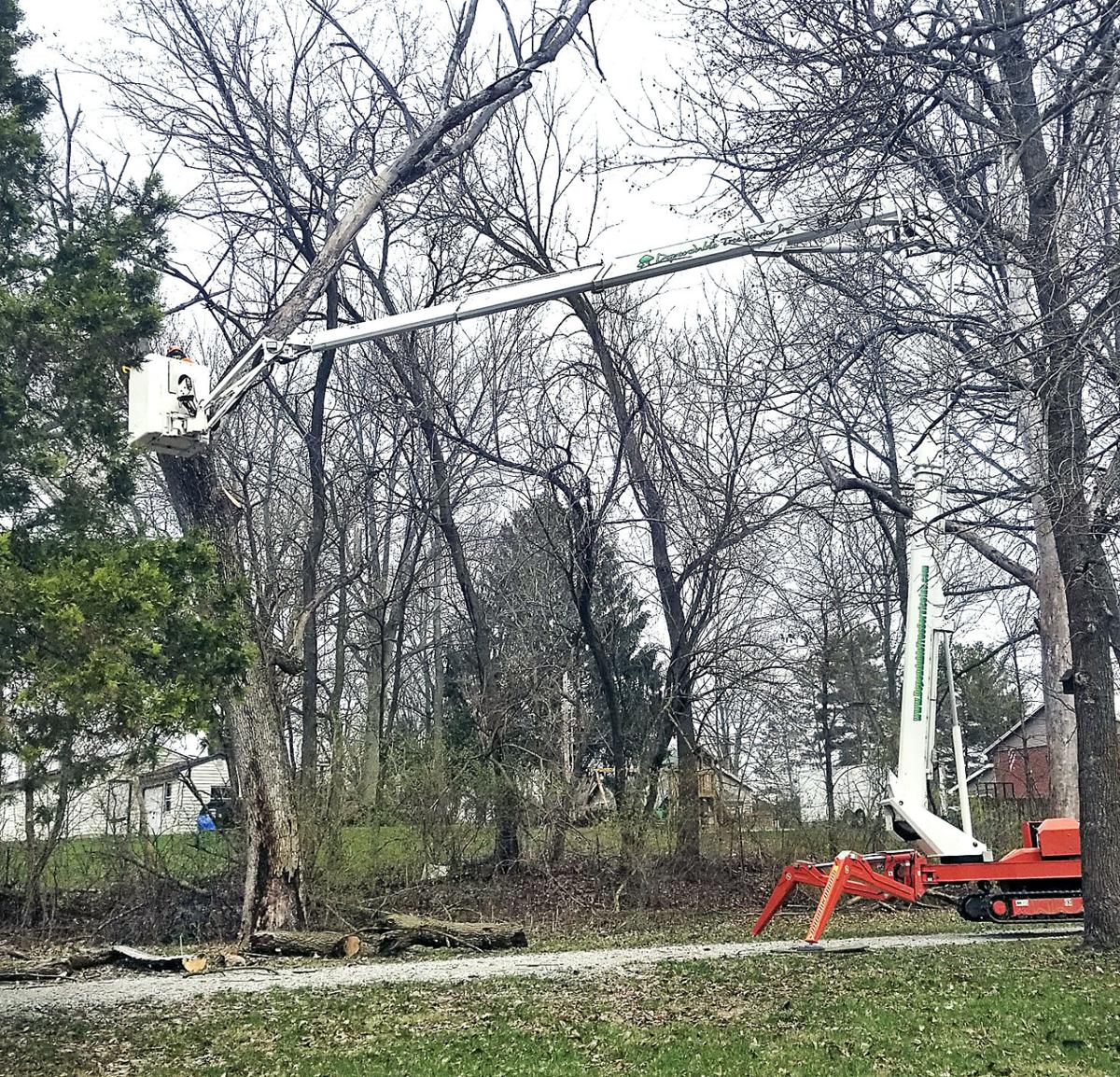 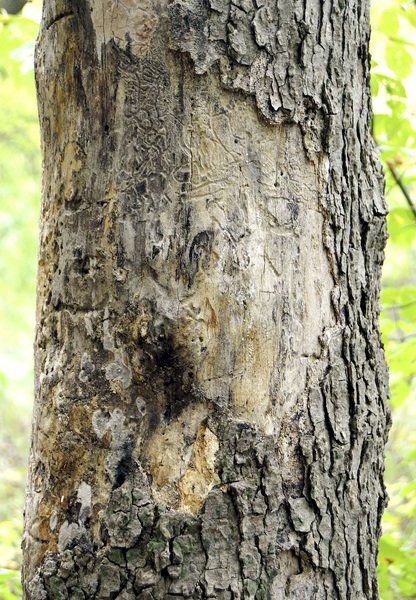 Evidence of damage from the emerald ash borer includes tunnel-like etchings under the bark and D-shaped holes in the trunk. 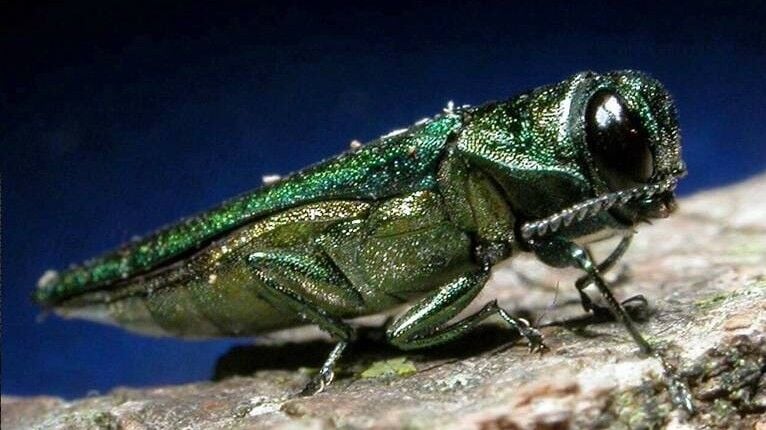 The emerald ash borer, a non-native invasive beetle, was first discovered in Indiana in 2002.

Workers with Dependable Tree Service in Markleville remove limbs from the upper canopy of a dead elm tree near a house in Anderson. Thinning canopies are a common sign of Dutch elm and other diseases in trees, according to forestry experts and landscape professionals.

Workers from Dependable Tree Service use a saw and crane to remove a tree from a property in Lapel in May.

Evidence of damage from the emerald ash borer includes tunnel-like etchings under the bark and D-shaped holes in the trunk.

The emerald ash borer, a non-native invasive beetle, was first discovered in Indiana in 2002.

ANDERSON — As leaves begin to change color and fall from trees across the Midwest over the next several weeks, forestry experts are urging Hoosiers to be on the lookout for telltale signs of disease that threaten the vitality of an untold number of trees across the state.

Maladies like the emerald ash borer, Dutch elm disease and oak wilt disease have been detected in a variety of trees. These diseases can not only damage or destroy majestic trees, but they can also create safety hazards on both public and private property, officials said.

In some cases, the damage has already been done. For example, the emerald ash borer has already moved through most of the state, having been documented in all 92 counties. According to the Indiana Parks Alliance, the tiny, metallic green insect could kill up to 95% of the state’s estimated 300 million ash trees within the next decade. With wood from ash trees being used to manufacture furniture, flooring, cabinets and baseball bats, the economic loss could be catastrophic – up to $20 billion, according to some estimates.

“It’s prevalent throughout the state,” said Tom Creswell, a clinical engagement professor of botany and plant pathology at Purdue University. “Most of the ash trees that have not been protected with injections have been damaged or are already near death.”

While the threat from the emerald ash borer is confined to ash trees, other diseases pose distinct threats to several other species. Oak wilt disease, for example, affects red and black oak trees and can move quickly through a tree’s canopy, causing it to shed leaves within a matter of weeks. A fungal disease that can be carried by insects, its spread has been markedly more uneven than other infections, making it harder to track.

Regardless of the species of tree, Creswell and his colleagues stressed that it’s important for private property owners, as well as workers in public parks, to be aware of indicators that can provide clues that a tree is in danger.

Discolored leaves, dark streaks in sapwood, thinning canopies and tiny holes in a tree’s trunk are among the symptoms of disease. Experts agree that reporting diseased trees and arranging for the safe removal of dead ones is vital for slowing the spread of fungi, insects and viruses that cause them.

“There are exotic invasive insects and diseases that are of concern that are moving into our area from neighboring states,” said Cliff Sadof, a professor and extension specialist in the Department of Entomology at Purdue University. “If we think one of these bad bugs are here, (the Indiana Department of Natural Resources) needs to know about it.”

Preventative measures such as treatment with insecticide can be highly effective if the warning signs are interpreted correctly and early enough. Sadof said pests including caterpillars, mites and scale insects are prolific carriers of disease-causing viruses. Also, recent erratic weather, including drought conditions and a stretch of hotter-than-normal temperatures, has made trees less resistant to disease, he said.

“(Extreme conditions) stress the trees out,” Sadof said. “They are starved for water, and that makes the sap more concentrated so that insects grow faster. It also makes them have fewer resources available to defend against diseases.”

Creswell said property owners and park naturalists should check plants on a regular basis and do research on the symptoms they find in order to avoid remedies that could do more harm than good.

“You really need to have an accurate diagnosis first before anyone can recommend treatment,” he said. “You don’t want to be googling symptoms and then applying treatment.”

Dead trees can present a different set of challenges because in some cases, brittle limbs or decaying trunk structures can create dangers to nearby structures. Experts recommend contacting a licensed arborist immediately if a tree is suspected to be dead.

“Cutting down a dead tree can be risky business,” Sadof said. “If a tree is dying, a professional can assess whether or not that tree is worth saving.”

Tree trimming professionals urge caution in pruning and attention to each tree on a property. Some suggest that homeowners add a thorough inspection of trees each spring to their list of annual chores to prepare for the summer season.

“One thing I’ve seen over the years is, people just tend to not really pay attention to their trees at all until something drastic changes,” said Chris Byer, who owns a tree trimming and removal company in Markleville. “You want to make sure the foliage has good color, it’s not yellowing, and the leaves are not small. Those things can be indicators of stress. A lot of times it can be a lack of some sort of nutrient in the soil that can be amended with the right people getting after it.”

What to look for

Although experts recommend a comprehensive diagnosis from a licensed arborist or tree professional, the following are symptoms that can be spotted by homeowners and which can signal the onset of disease: