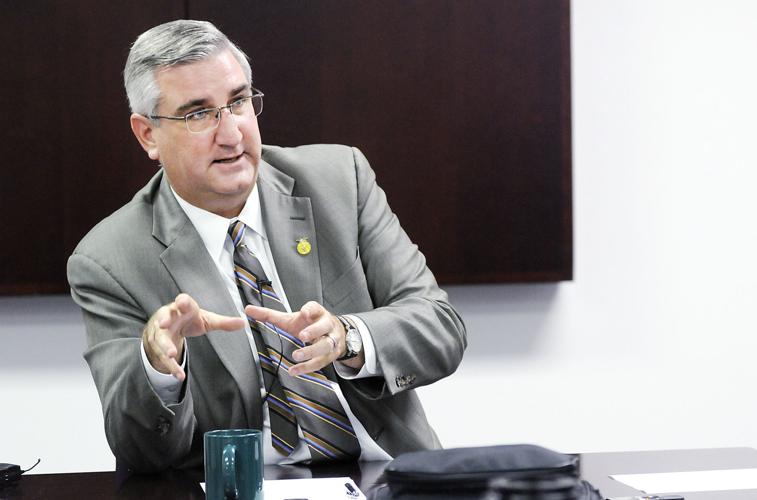 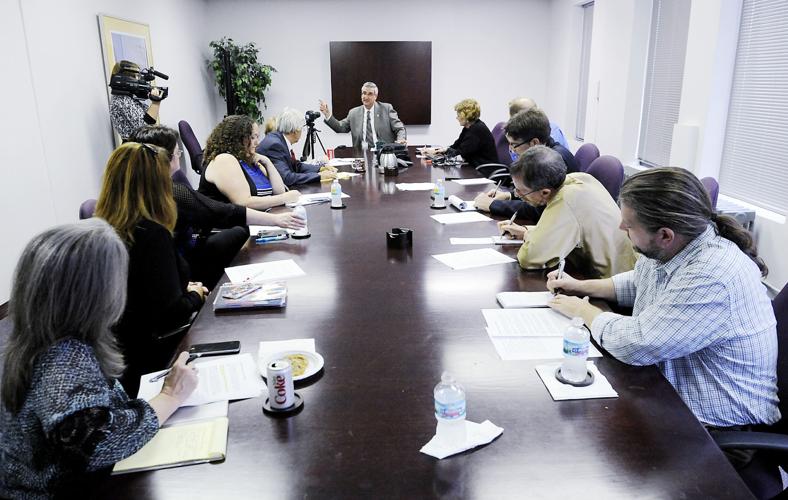 ANDERSON – Gubernatorial candidate Eric Holcomb says the debate concerning civil rights protections for the LGBT community should be addressed at the local level.

Holcomb, the Republican Party nominee, met Tuesday with editors and publishers for the Community Newspaper Holdings Inc. newspapers from around the state on Tuesday at the offices of The Herald Bulletin.

Just nine months ago, Holcomb suspended his campaign for the GOP nomination for a seat in the U.S. Senate and was selected by Gov. Mike Pence to be lieutenant governor, replacing Sue Ellspermann. When Pence was selected as the vice presidential candidate by Donald Trump, Holcomb was selected to be the party's gubernatorial candidate.

At times, Holcomb was demonstratively hitting the table and using his hands to make points during the 75-minute meeting that covered a wide range of topics from economic development, education, paying for infrastructure, civil rights, presidential politics and immigration.

When asked about the Religious Freedom Restoration Act (RFRA) passed and amended in 2015 by the Indiana General Assembly, Holcomb said the legislation is as “good as it can get."

Holcomb said lawmakers during the 2016 legislative session couldn’t reach a compromise agreement on adding protections to the LGBT community.

“There was no progress on either end of the spectrum,” he said. “Local communities can address the issue. Indiana is in a good place.”

Holcomb said Indiana is a state that welcomes and doesn’t discriminate. He said Indianapolis had a record year in tourism.

“I don’t discriminate,” he said. “I respect the law of the land.”

Concerning the presidential race, Holcomb said he supports Republican candidate Donald Trump, although he found comments attributed to Trump concerning women and minorities as offensive. He added he wouldn’t tolerate the comments.

“They were disappointing to hear,” he said of Trump’s taped comments. “I hope he is not the same person today as when he said those things.”

Holcomb said he supports Trump on a long list of issues and that his policies will be more in line with the interests of Indiana. He didn’t elaborate on what those issues were.

He is opposed to the candidacy of Democrat Hillary Clinton on a personal level.

When he served in the U.S. Navy, Holcomb had such a high-level security clearance that he wouldn’t leave classified documents unattended to get a cup of coffee in another room.

“She is not qualified for promotion,” Holcomb said. “If I did that, I would have been demoted and sent to (Fort) Leavenworth for her actions.”

Concerning a recent federal court ruling upholding an injunction that found Gov. Mike Pence couldn’t withhold funds to organizations helping Syrian refugees settle in Indiana, Holcomb said if an appeal is filed that he wouldn’t pursue it if elected as governor.

“I understand where Gov. Pence was coming from,” he said. “The FBI director said we didn’t know who is infiltrating the country. A goal of ISIS is to infiltrate.

Holcomb said he would wait to see if Pence files an appeal to the federal court ruling. He said, if he's elected governor, he wouldn’t pursue an appeal if one is started by the Pence administration.

“I want to make sure we’re doing everything possible to ensure folks aren’t slipping through the cracks,” he said. “So far we have seen no adverse impact.”

Democrat John Gregg, seeking the office of governor, will be interviewed by CNHI editors and publishers today and a story will be published on Thursday.

CNHI Statehouse Bureau reporter Maureen Hayden will be writing more in-depth stories on the two interviews in stories before the Nov. 8 general election.