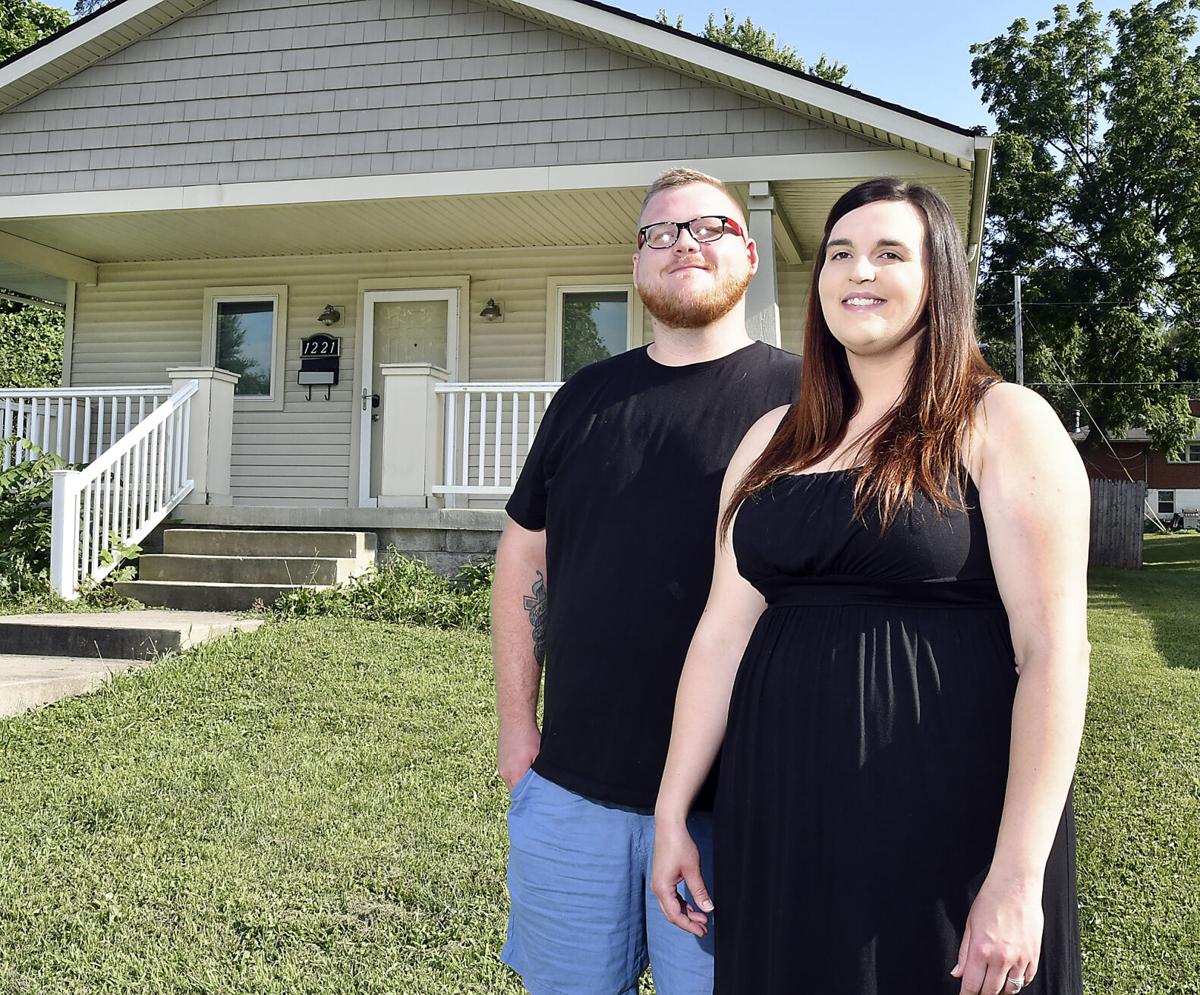 Scott and Kerry Winkle, millennial homeowners, stand in front of their house on the near west side of Anderson. Anderson’s status as a small city near an interstate surrounded by farm country helped persuade the Winkles to enter the housing market. 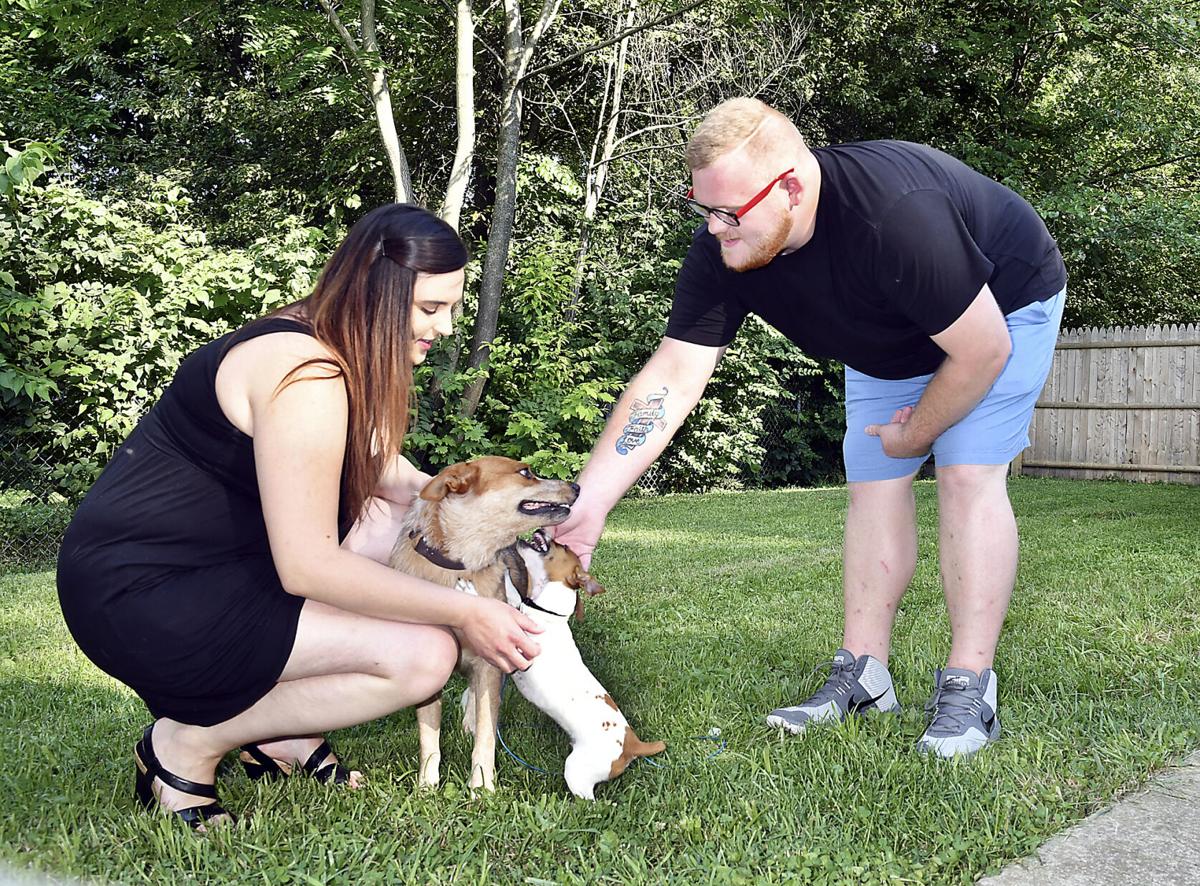 Scott and Kerry Winkle now have a backyard for their two dogs, Bentley and Maverick, to run and play in.

Scott and Kerry Winkle, millennial homeowners, stand in front of their house on the near west side of Anderson. Anderson’s status as a small city near an interstate surrounded by farm country helped persuade the Winkles to enter the housing market.

Scott and Kerry Winkle now have a backyard for their two dogs, Bentley and Maverick, to run and play in.

ANDERSON — Buying a home right away wasn’t necessarily the plan for Scott and Kerry Winkle when they got married last year. But it wasn’t long before they began to rethink their timeline.

“We started looking (at houses) as kind of a gag,” Scott Winkle said. “That’s part of the reason we’ve bought a house now, because she was sick of not being able to go outside, not having a backyard, because we were in an apartment.”

The couple, who both work with autistic children as applied behavior analysis therapists — Scott in Anderson and Kerry in Indianapolis — realized that life was taking them in a different direction than they had planned.

As they each close in on their 28th birthday, the Winkles are bucking a nationwide trend of low homeownership rates among millennials. That isn’t necessarily the case in Indiana, where according to a recent survey by Porch, a consumer service company that pairs homeowners with local home improvement contractors, 49.5% of millennials own their homes. That’s the fifth highest rate for that demographic in the country.

“We do see a lot of millennial buyers,” said Jada Sparks, an agent with Carpenter Realtors in Anderson. “When you think of people in their 30s, even if they’ve delayed purchasing — whether or not they were living with their parents or being transient or paying off student loans before they purchase — they’re all getting older. I think they’re more likely then to put down their roots.”

According to data from the U.S. Census Bureau, while the overall national homeownership rate is 63.9%, the rate for millenials is 39.5%. A study by the Urban Institute, a nonprofit research group, theorizes several reasons for that gap. A growing tendency to delay marriage, increased student loan debt, a lack of affordable housing – especially in urban areas – and geographic preferences were all cited in the January 2019 study as factors.

“Especially in Anderson, a lot of people make the commute to Indy,” said Amanda Malone, an agent with F.C. Tucker and chair of the Madison County division of the Metro Indianapolis Board of Realtors. “It’s cheaper to live in Anderson than it is in Indy, so why pay someone else’s house payment when you can set yourself up for success in the future?”

Sparks said Madison County lies in a region that many economists believe to be among the most economical in the country when it comes to housing costs.

“If you’re a millennial in California, you’re not likely to be able to afford a mortgage,” she said. “But Central Indiana is one of the most cost effective real estate markets in the United States. We have great houses at affordable prices, and we’ve got great interest rates, and it really makes a compelling argument to go ahead and put down your roots.”

That argument, along with Anderson’s status as a small city near an interstate surrounded by farm country, helped persuade the Winkles to enter the market. And, although he’s responsible for a mortgage now, Scott said that doesn’t imply that he and Kerry are permanently anchored to the area.

“For me, this (house) offers stability, but we don’t want to live here forever,” he said. “If I live here for the next 30 years, that’d be fine, but at the same time, I think (owning a home) for us is different than what it was for my parents’ generation. Just because you’re buying a home, that doesn’t mean it’s a forever home.”

Anderson is included with Indianapolis and Carmel and ranked 14th in the country on a list of large metro areas (populations of more than one million) with the highest rate of homeownership among millennials.

Researchers calculated the median home price, the typical monthly mortgage payment, median earnings for full-time millennial workers, and the cost of living. The analysis included the following statistics for the region:

Porch, a marketplace for home services, analyzed data from the U.S. Census Bureau, the Bureau of Economic Analysis, and Zillow to formulate the rankings. The top 10 include: