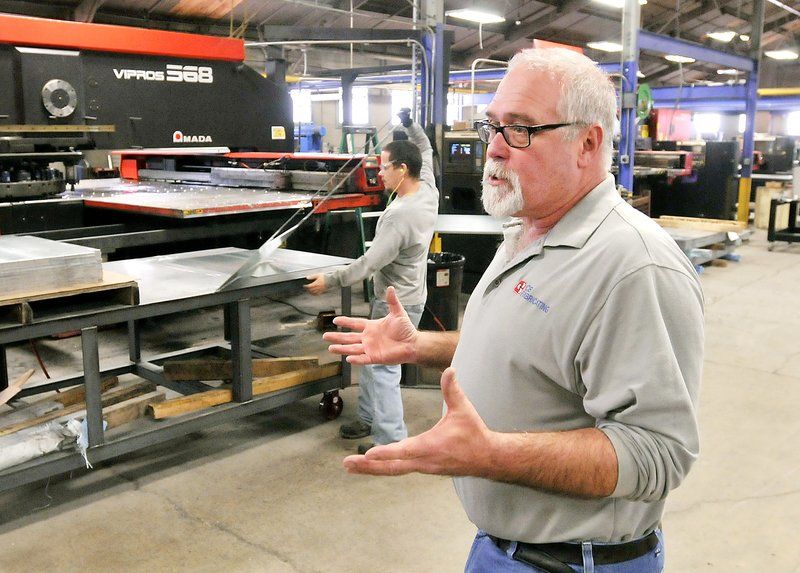 John P. Cleary | The Herald BulletinChris Barkdull, president of CB Fabricating, explains the different types of services they offer as Matt Anderson operates a turret press in the background. 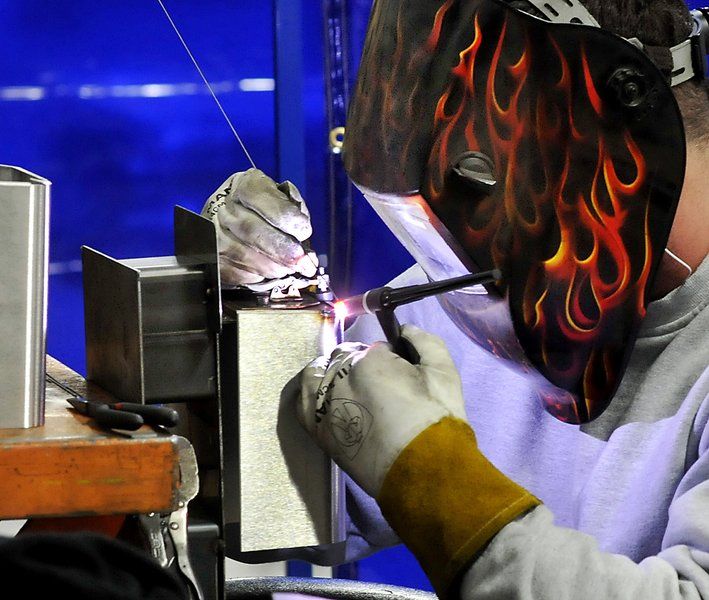 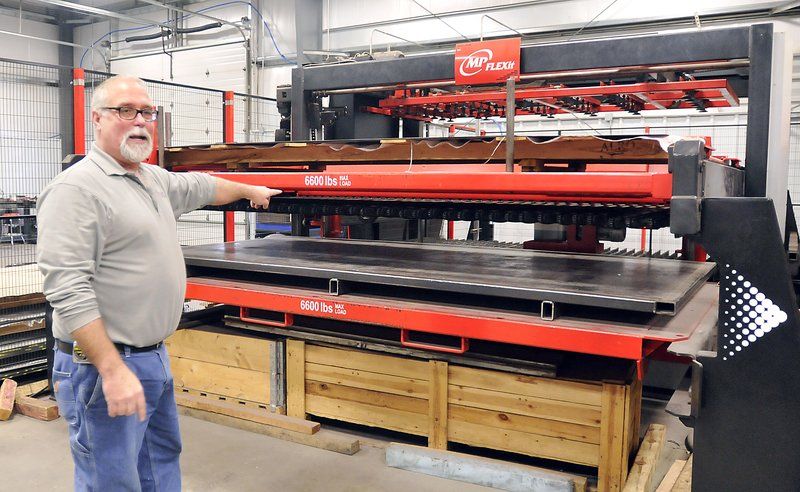 John P. Cleary | The Herald BulletinChris Barkdull, president of CB Fabricating, shows part of their latest piece of equipment, a precision laser cutter that is fully automated with load and unload capabilities. 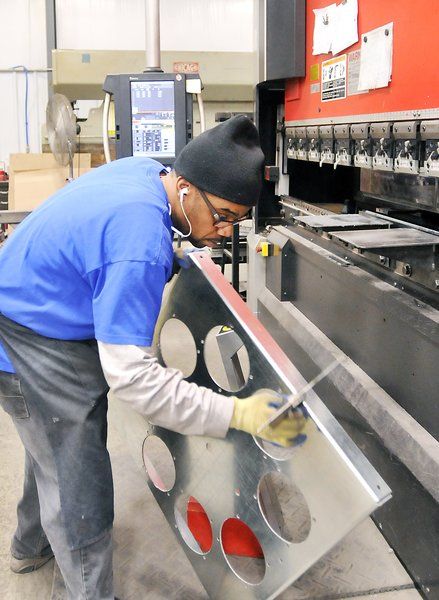 John P. Cleary | The Herald BulletinAnthony Phillips checks his angles as he shapes this piece of metal with a press brake at CB Fabricating. 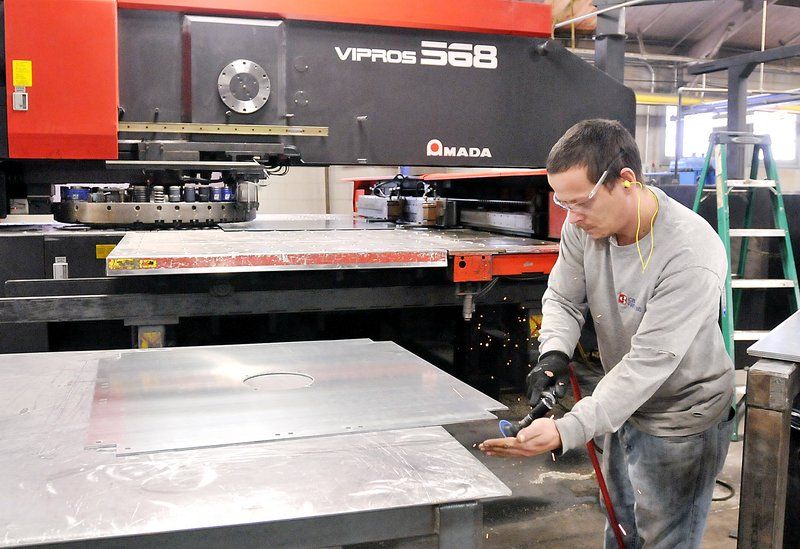 John P. Cleary | The Herald BulletinMatt Anderson trims the edges of this part just out of a turret press at CB Fabricating.

John P. Cleary | The Herald BulletinChris Barkdull, president of CB Fabricating, explains the different types of services they offer as Matt Anderson operates a turret press in the background.

John P. Cleary | The Herald BulletinChris Barkdull, president of CB Fabricating, shows part of their latest piece of equipment, a precision laser cutter that is fully automated with load and unload capabilities.

John P. Cleary | The Herald BulletinAnthony Phillips checks his angles as he shapes this piece of metal with a press brake at CB Fabricating.

John P. Cleary | The Herald BulletinMatt Anderson trims the edges of this part just out of a turret press at CB Fabricating.

ANDERSON — Chris Barkdull spends his days molding blank sheets of metal into usable products. Methodically bending and sometimes breaking the material, he carefully inspects each piece to ensure it is up to his standards.

Every component he creates as owner of CB Fabrication in Anderson is pressed, ground, shaped, polished and inspected until it is strong enough to stand up to anything that is thrown at it without breaking or blemishing.

He begins each day with sheets of aluminum or steel, which have the potential to become anything, so long as someone with the right talent and know-how takes time to properly prod it into shape. By the time that piece of metal leaves his shop it has a purpose, ready to serve in its given capacity.

Barkdull sees each of his employees, many who have criminal records or otherwise checkered pasts, with the same promise for potential — so long as someone gives them a chance. Or two.

At one time, he employed seven former felons at his metalworking shop, although that number has dropped to five.

Mary Ann Boone sent in more than 50 applications to various businesses, many of which were rejected, she said, because she had a record with five felony convictions.

Then she heard about some of the chances Barkdull had taken with people with checkered pasts and decided to send in her application. She included a letter explaining that she had previously been incarcerated and didn’t have a driver’s license.

“I heard that he had hired people on work release, so I wondered if he would hire a chick with felonies,” she said.

Now, after about a year working for the company, Boone said she is on the “right path to success” and going to school at Ivy Tech.

“I mean, I’m blessed,” she said. “A lot of people do struggle (after they are released from jail).”

For Barkdull, it’s no big thing to give someone a second chance. After all, he wouldn’t be the level-headed business owner he is if he hadn’t been given multiple chances throughout his life.

He used to be called “Captain Chaos” by the people he worked with for his propensity to fly off the handle at the slightest provocation. That wasn’t his only fault, he said. Barkdull also sometimes failed to be the greatest of fathers.

That’s all before he decided to give up control of his life. One day about five years ago as he was walking out the doors after a day of work, he turned to his wife, who works with him as a polisher, and said he was going to let his faith determine his path.

“It’s amazing what happens when you put God in control,” he said. “Once you realize there is a power greater than you, it is just a different mindset.”

Barkdull mostly credits Jim Carr, a competitor turned coworker, with helping prod him toward the right path. Barkdull said a series of conversations while working to negotiate jobs and contracts helped to turn his life around.

Carr said he didn’t realize the impact he was making on Barkdull’s life.

“I didn’t know I was doing anything special,” he said. “But you are always making an impact on people’s lives, for good, bad or neither. And most of the time you don’t know if you really did anything or not.”

Carr is the shop’s “unofficial staff counselor,” helping talk to people when issues, on the job or otherwise, pop up. But again, he is humble about his role.

“It’s nothing special, just part of working with a company,” he said. “You talk to people, get to know them, their families.”

Something Carr, Burkdull and the rest of CB Fabrication is doing must be right, though.

The company has expanded twice in as many years. Once to include space for an industrial laser cutter that cost more than $1 million, and another that added 9,000 square feet of assembly space to allow them to take a national contract.

That contract also allowed the company to expand from eight employees to 23.

Barkdull only recently hired a salesman to help search for more work for the company. Before, he said, all of his business was from word of mouth — which fits with his nostalgic view of business.

“I miss the days of a handshake and telling people, ‘You have my word that this is the way it will be done’ being enough,” he said.

But even as his business grows Barkdull is striving to stay within his means.

“Currently I think this is where we need to be,” he said. “I don’t sleep really well with indebtedness; I don’t want to bite off more than we can chew. Just going to sit back and see where this can go.”

Besides, “My goal isn’t to make a million dollars, although making a little money isn’t a bad thing. My mission is to give people an opportunity.”