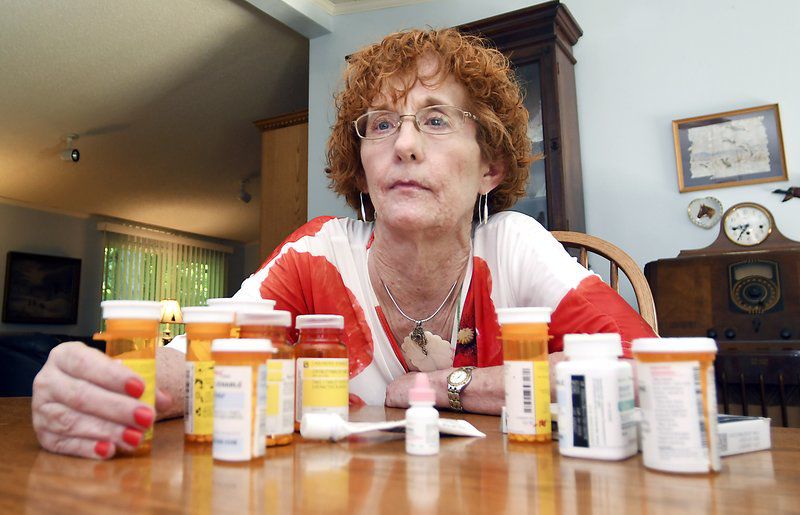 Lynn Venable currently takes about a dozen prescription drugs to manage her pain for neurofibromatosis. 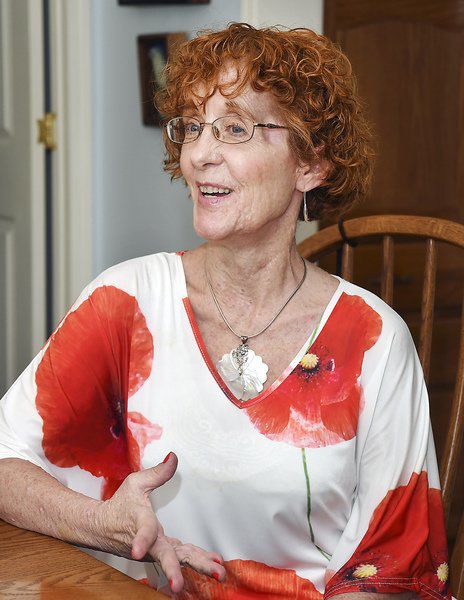 Lynn Venable, who suffers from neurofibromatosis, estimates she and her husband Jon spend about $10,000 a year out-of-pocket on prescription drugs. 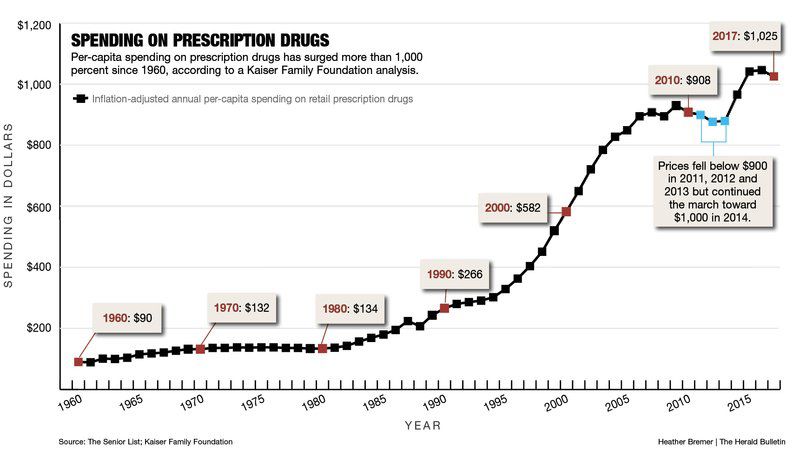 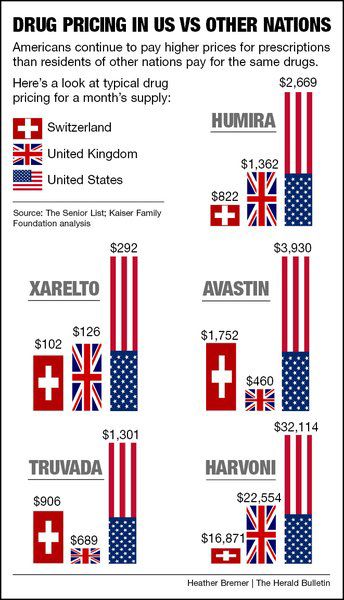 Lynn Venable currently takes about a dozen prescription drugs to manage her pain for neurofibromatosis.

Lynn Venable, who suffers from neurofibromatosis, estimates she and her husband Jon spend about $10,000 a year out-of-pocket on prescription drugs.

ANDERSON — Lynn Venable was diagnosed with neurofibromatosis, a genetic disorder of the nervous system, at birth. The disease causes tumors to form on nerve tissue throughout the body, including the brain and spinal cord.

Since the early 1980s, Venable has undergone more than 40 surgeries to remove tumors — all of them benign — and has tried a variety of experimental medications to manage her symptoms, with varying degrees of success.

When the tumors regenerate, she says, medication becomes necessary to manage painful side effects. Doctors prescribed a morphine pump in 2000, when the tumors were first discovered on her spine.

Managing her pain isn’t cheap. Venable currently takes about a dozen prescription drugs, including morphine and anti-seizure medication, as well as Forteo, which treats osteoporosis. She estimates she and her husband Jon, who recently retired from his job with the Indiana Department of Correction, spend nearly $10,000 a year out-of-pocket on prescription drugs.

The study found the average Hoosier pays $1,818 per year for prescription drugs, according to data from the Kaiser Family Foundation, GoodRx and the National Conference on State Legislatures. For senior citizens, the costs are usually even more staggering, as the study found nearly 90% of seniors take at least one prescription medication.

“I think we are a prescription society, not just in terms of the aging population, but in terms of our overall health,” said Stephenie Grimes, administrator with the Madison County Health Department. “We look to medication to fix everything.”

THE POLITICS OF PRESCRIPTIONS

The subject has become a hot-button political issue, as well. At least 20 states have enacted laws to address cost sharing and deductibles for prescription drugs, according to the NCSL. And several states are considering legislation that would require drug manufacturers to disclose detailed pricing information or explain large price increases.

At the federal level, the Prescription Drug Price Relief Act, introduced in January by Sen. Bernie Sanders, would require the Department of Health and Human Services to review all brand-name drugs annually for excessive pricing. The bill would also require comparison of the price of the drug in question to the median price in Canada, the United Kingdom, France, Germany, and Japan.

According to the Center for Economic Policy and Research, such a law would lower the prices of most brand-name drugs by as much as 50%. The legislation is currently being debated by the Senate Committee on Health, Education, Labor, and Pensions.

In Indiana, the topic has been assigned to a legislative summer study committee. State Rep. Terri Austin, D-Anderson, expects several bills to be filed during next year’s legislative session.

“I think you’ll see some bills filed to cap copays, as other states have done,” Austin said. “I think we’ll hopefully be able to come to some agreement or resolution about the type of regulation and transparency that needs to be applied to pharmacy benefit managers and the impact on drug stores — not just drug chains, but even independent drug stores.”

Pharmacy benefit managers, or PBMs, are third-party organizations that work to administer drug programs on behalf of commercial health plans, self-insured employer plans and Medicare Part D plans. Austin believes that some PBMs operate with less-than-transparent business practices, which makes it difficult for the government to intervene and regulate prices.

“It’s not the kind of thing where you can go in and just say, we’re going to slap this fix on it and hope that it works,” Austin said. “You really need to spend some time trying to figure out how the whole system works so that you can find the right points to insert state government regulation.”

Austin would also like to see Indiana, like some other states, consider easing and clarifying restrictions on purchasing certain drugs online or importing them from other countries. Federal law in those areas is murky, to say the least.

An advisory on the Food and Drug Administration’s website, for example, states: “Don’t purchase from foreign websites at this time because generally it will be illegal to import the drugs bought from these sites, the risks are greater, and there is very little the U.S. government can do if you get ripped off.”

Ambiguity in those regulations doesn’t stop many consumers, including Venable, from seeking price relief outside the U.S. She has ordered drugs from Canada in the past and would consider doing so again if she’s convinced the drug will be effective at a substantially lower price.

She and her husband do extensive research to assure they’re getting the best deal — and sometimes, she says, all they need to do is ask.

“Just recently Jon was on a heart medication that was going to be $300 (per month). He called our insurance company and asked them for a like medication, and they found one for $19,” she said. “You have to be proactive and not just accept when the doctors say, ‘Here’s medication, take it.’ A lot of times they’re not considering cost.”

“We utilize discounted and free prescription lists at area pharmacies and online resources such as GoodRx and NeedyMeds to locate the lowest prices available,” said Brandy Forrer, RN, a case manager at Community. “We’re also able to help with obtaining coupons and finding assistance programs.”

Venable remains unconvinced that any meaningful solutions will happen soon.

The total number of prescriptions filled by Americans has increased by 85 percent over the past two decades, according to a study by Quintiles IMS. In 2016, more than 4.4 billion prescriptions were filled. Here is a list of the top 10 most prescribed drugs:

5. Azithromycin (Zithromax, Z-PAK): An antibiotic used for treating ear, throat and sinus infections as well as pneumonia, bronchitis and some sexually transmitted diseases. Side effects include loose stools, nausea, stomach pain and vomiting.

6. Metformin (Glucophage): Used alone or combined with other drugs for treating Type 2 diabetes in adults and children. Most common side effects include nausea, vomiting, gas, bloating, diarrhea and loss of appetite.

8. Amlodipine (Norvasc): A calcium channel blocker used for treating high blood pressure and chest pain. Common side effects include headaches and swelling of the lower extremities. Can also cause dizziness, flushing, fatigue, nausea and palpitations.

• Good Rx, a website tracking prescription drug prices at more than 75,000 pharmacies in the U.S., offers a consumer card that can provide savings of up to 80%. Visit www.goodrx.com/discount-card.

• The Health Resources and Services Administration's 340B Drug Pricing Program allows eligible patients to purchase discounted drugs. Information on enrollment can be obtained by contacting either a hospital, community health center or participating organization.