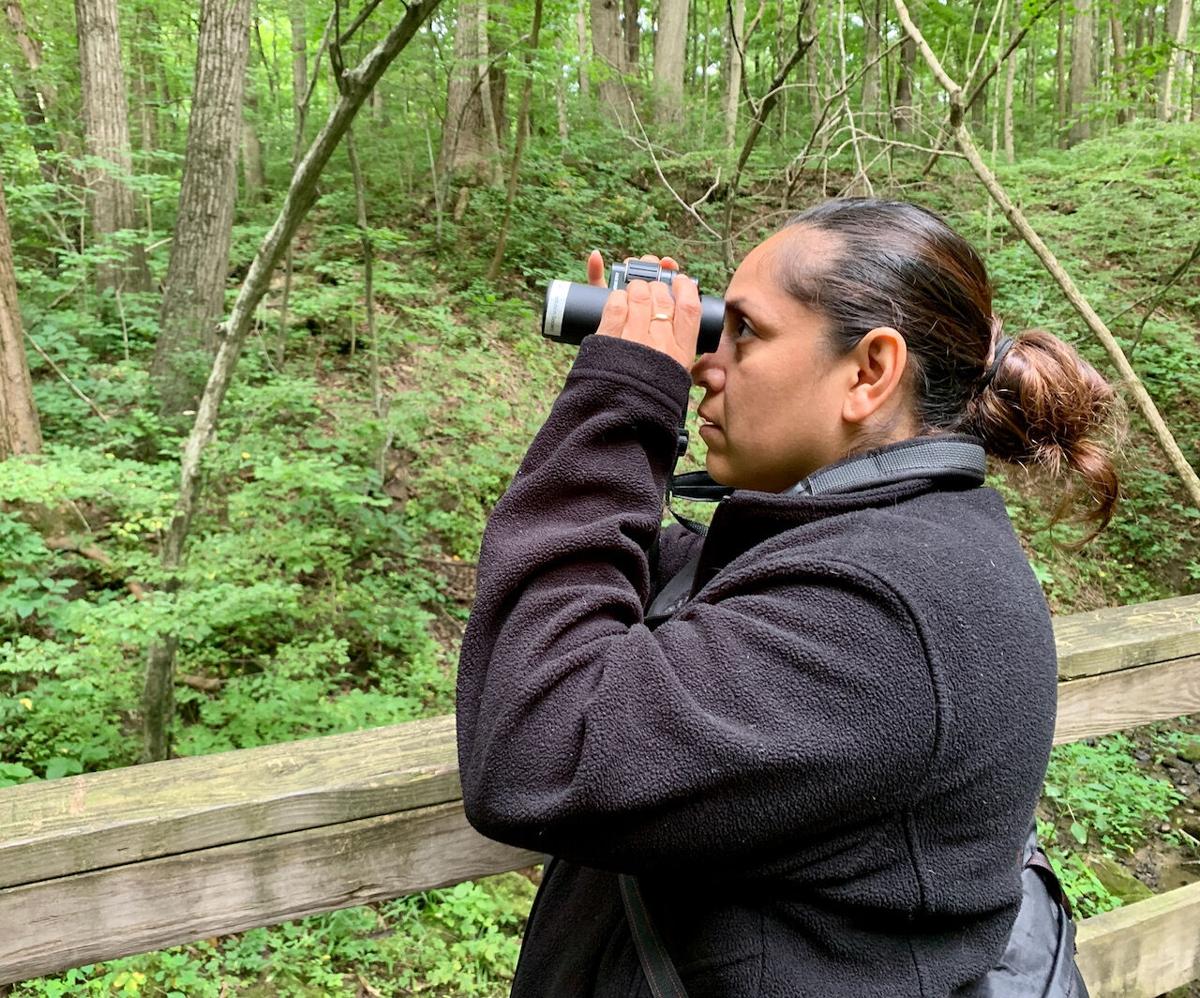 Anita Vega uses a pair of binoculars to observe a distant cardinal during a bird walk Saturday morning at Mounds State Park. 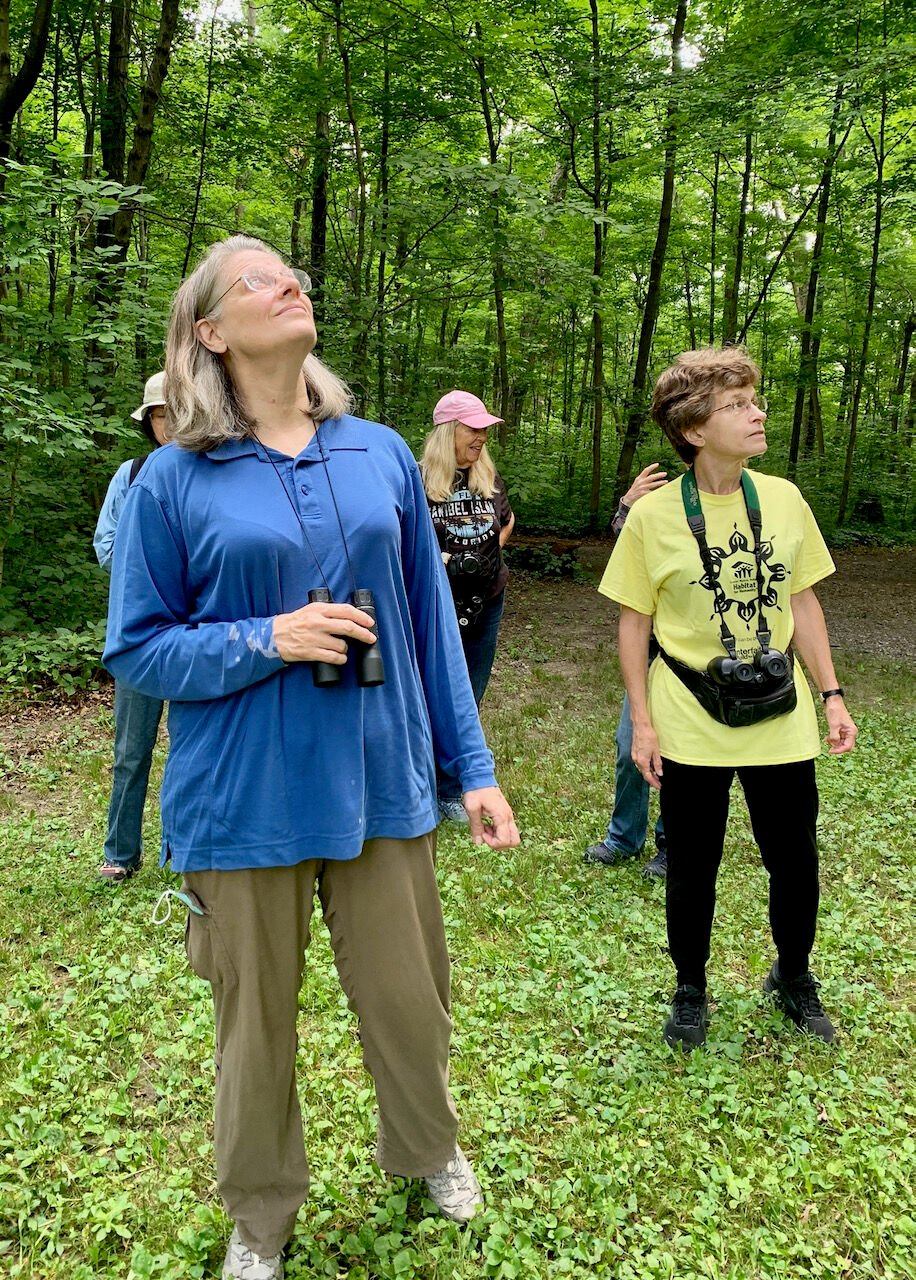 Donna Browne, left, and Ann Wolfe, both from Muncie, look for birds among the treetops surrounding a clearing at Mounds State Park. Browne and Wolfe took part in the Robert Cooper Audubon Society’s monthly bird walk at the park.

Anita Vega uses a pair of binoculars to observe a distant cardinal during a bird walk Saturday morning at Mounds State Park.

Donna Browne, left, and Ann Wolfe, both from Muncie, look for birds among the treetops surrounding a clearing at Mounds State Park. Browne and Wolfe took part in the Robert Cooper Audubon Society’s monthly bird walk at the park.

ANDERSON — For a group of bird watchers who set out along Trail 2 at Mounds State Park on Saturday morning, a planned two-hour hike through the woods wasn’t so much about what they could see, but what they could hear.

“Particularly during a breeding period when the birds are hunkered down, you’re going to hear more than you see,” said Catherine Kubo, a member of the Robert Cooper Audubon Society who acted as a guide for the bird walk.

The society sponsors field trips for members mostly in the spring and the fall, but Kubo said enough people have expressed interest that they are scheduling monthly hikes at Mounds.

“The objective is to help people see and appreciate and hear what we have going on in the birding world,” she said.

The group of about 15 stopped periodically along the trail to listen for bird calls unique to different species. Along the way, chickadees, cardinals, hummingbirds and song sparrows could be heard.

The experience was enjoyable for Anita Vega, who decided to take her first bird hike on a whim while she was on a bike ride near the park.

“I had never done a hike, so I’m glad I was close by,” she said. Lifting a pair of borrowed binoculars to her eyes, she was able to spy a red-breasted cardinal among the thick canopy of leafy treetops.

Other veteran bird watchers in the group entered information about the species they heard into apps on their phones. The information helps the Audubon Society and other conservation groups track migration patterns and population trends among birds in the area.

That task is challenging right now, according to Gwen Jones of Muncie, because many bird species keep a low profile during their mating seasons.

“Also this time of year, especially because the leaves are so thick, there’s just such an abundance of green right now,” Jones said. “It’s very hard to pick a bird out unless it’s a very friendly bird. Some of our native birds that stay here all year, like the chickadees and such, are pretty friendly.”

Jones took up bird watching while she lived in New Hampshire. She said the broad-winged hawks in the region would migrate south across mountain ranges in the area, and the sight of them captivated her. An avid runner, she said she had never noticed the aviary life in the woods near her home before then.

“It just fascinated me that there was this whole world that was right in front of me,” she said, “and I had been completely oblivious to it.”