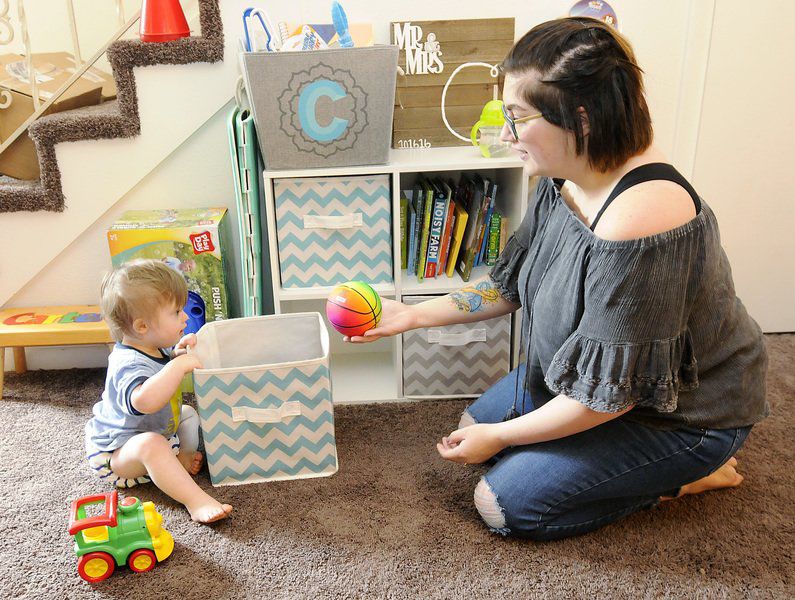 Don Knight | The Herald BulletinNovah Norris Campbell plays with her 2-year-old son Carter on Thursday. She graduated from Goodwill’s Nurse-Family Partnership program, which partners mothers with nurses from prenatal care until their children turn 2. 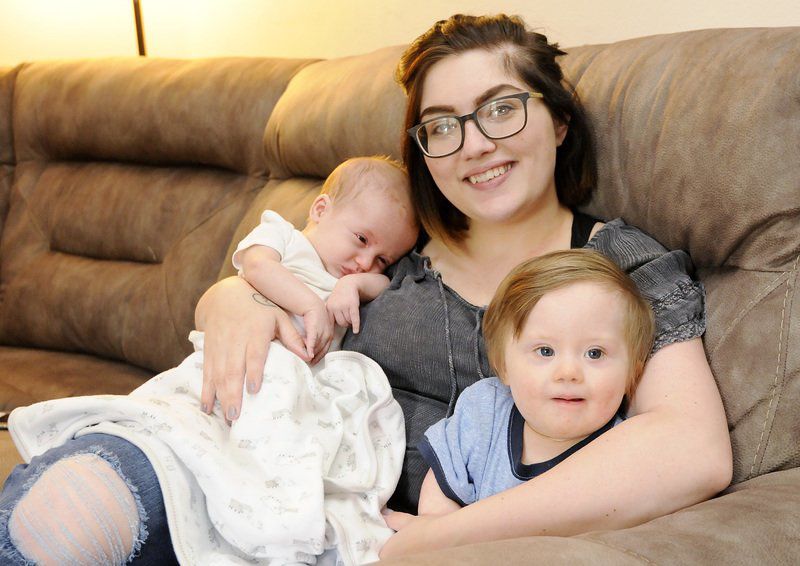 Don Knight | The Herald BulletinNovah Norris Campbell holds her sons Henry, left, and Carter at their home in Alexandria. 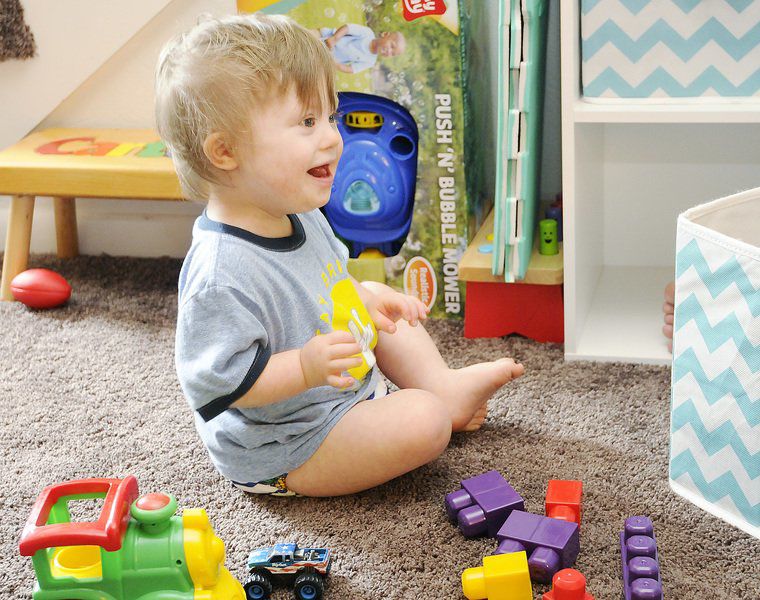 Don Knight | The Herald BulletinNovah Norris Campbell plays with her 2-year-old son Carter on Thursday. She graduated from Goodwill’s Nurse-Family Partnership program, which partners mothers with nurses from prenatal care until their children turn 2.

Don Knight | The Herald BulletinNovah Norris Campbell holds her sons Henry, left, and Carter at their home in Alexandria.

ALEXANDRIA – Carter Campbell scooted around on the floor as any 2-year-old would, intermittently playing with his toys and seeking attention from his mother and other people in the living room of their Alexandria apartment.

Novah Norris Campbell was surprised when her firstborn was diagnosed with Down syndrome a few weeks after he entered the world.

But she already had her support system in place. Since her 14th week of pregnancy, Campbell participated in Goodwill of Central & Southern Indiana’s Nurse-Family Partnership program, a two-year program for first-time mothers.

“I don’t think I’m doing anything special. I’m just doing the best that I can. What I’m doing as a mother is what every other mother should be doing if they want the best for their children,” said the stay-at-home mom, who gave birth two months ago to Henry.

Campbell graduated from NFP in June, one of the first mothers in northeast Indiana to do so.

NFP is an evidence-based nationwide program available in 30 Indiana counties that is intended to combat infant mortality. However, the 40-year-old program has been available in Indiana only since 2011, and in the northeast region only since 2015.

The program is intended to reduce infant mortality through improved pregnancy outcomes, child development and economic growth. That’s accomplished through relationships that focus on delivering information on child safety and development issues, such as safe sleep and breastfeeding.

In Madison County, the infant mortality rate was 7.5 per 1,000 as of 2015, the last year for which figures are available.

According to the Indiana Minority Health Coalition, the number is even higher among African-American women and those who have four or fewer prenatal visits.

The most common causes, according to the coalition, are short gestation and low birth weight, congenital anomalies and sudden infant death syndrome. Contributing factors include maternal obesity and smoking.

Born 19 years ago in Anderson, Campbell grew up in Alexandria. She admits to having a challenging adolescence, getting pregnant her junior year at Alexandria-Monroe High School and dropping out shortly after Carter was born.

Campbell said it was the stress of the things she had been told about Down syndrome children, such as issues with muscle tone, heart defects and digestive issues, that led her to sign herself out of school.

“It terrified me, and I didn’t want to leave him with anybody,” she said.

“I just couldn’t keep up with it. Their deadlines were unrealistic,” she said.

It was the nurse practitioner at Campbell’s obstetrician’s office who recommended she sign up for NFP. Clients can self refer or also be referred by other programs, such as Women, Infants and Children.

“I figured that I could use all the help I could get,” she said.

Her assigned nurse, Angel Hill, made home visits, weekly the first four weeks, then every other week until Carter was born. Then she visited weekly again for six weeks before returning to the biweekly schedule.

Hill helped Campbell pick a pediatrician and coordinated other resources. One time, when there was a problem with a prescription for Campbell at CVS, Hill intervened.

“She called up there like she was my mom and made them give me my pain medication,” Campbell said. “Angel, she kind of became like a second mother to me. Sometimes she would just come and sit and talk to me about my day.”

And it was Hill who got Campbell back in school, suggesting she attend classes through the Excel Center. Campbell and her husband, Brandon, who already had graduated from high school and had a steady job, decided it was time for her to finish her diploma.

“We decided I was going to quit my job and go to school. It was a struggle. I was pregnant with Henry and had Carter at home,” she said. “I didn’t want Carter to think I had to drop out because of him when he was older. I wanted to set an example for my kids. I didn’t want them to think I had to hold back from doing things that were important to me because I had them.”

Campbell earned a Core 40 diploma and a CNA license.

“I got my diploma and got the graduation ceremony I missed out on,” she said. “I have that to fall back on if I needed to get a job.”

Now a program supervisor, Hill said Campbell was relatively typical of the participants in NFP.

“She was a teen mom, and not everyone was super-excited about it. Her mind was not on her classes because she was thinking about her pregnancy,” she said.

Hill said though the program is intended to reduce infant mortality, it also monitors the well-being of the mothers.

“We do different assessments on mom, too, for inter-partner violence or depression,” she said. “It’s an opportunity to help moms when they’re most vulnerable.”

Rather than hands-on nursing, Hill said, the program is more educational.

“The truth of it is babies don’t come with instructions. We’re kind of there to help through that process,” she said. “We talk to them about brain development and how important it is to start reading to your baby before he even comes.”

One of the things that makes NFP successful is clients are more likely to engage in the change they want to make if they are the ones driving it, Hill said.

“We develop relationships that are pretty impactful. We develop trust. For some of the clients, they’ve never had that,” she said.

Hill said though the program ends, the relationship doesn’t.

“I always tell them you have my number,” she said.

Lisa Crane, senior director for the NFP program in central and southern Indiana, said the program already is making a difference.

“Young mothers are so isolated and so often don’t receive the support that they need,” she said. “We are seeing really great metrics in those things that affect infant mortality.”

One of the primary areas in which the program is effective, Crane said, is pre-term births. Last year, 91 percent of NFP participants delivered full-term babies, she said.

“We know we’re having an effect on that. We’re seeing good outcomes on that,” she said.

According to ISDH, about 70.6 percent of Madison County mothers breastfed, compared to 77.4 percent statewide. However, the number of mothers who breastfeed jumps to 98 percent among NFP participants, Crane said.

Critical to identifying potentially life-threatening problems are the relationships developed between the nurses and the clients, Crane said.

“Sometimes I say the most important thing that our professionals do is form the relationships with the clients.”

Goodwill of Central & Southern Indiana’s free Nurse-Family Partnership program is expanding from about 50 mothers to 200.

To be eligible, women must be first-time mothers before their 28th week of pregnancy. Participants also must meet Medicaid eligibility requirements and live in one of 30 counties.