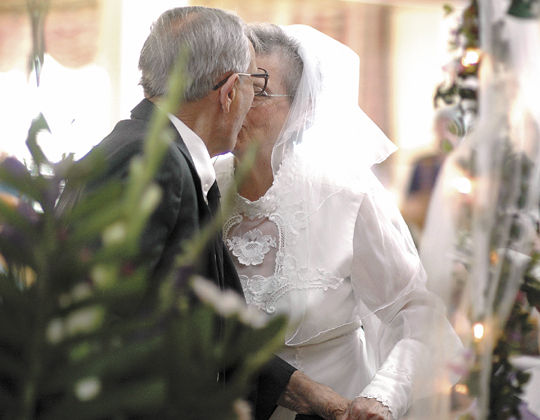 Victor Rhoda and Katherine Waldrop, residents at Manor Care Nursing Home, seal their wedding with a kiss. They celebrated their wedding at the nursing home Friday afternoon. 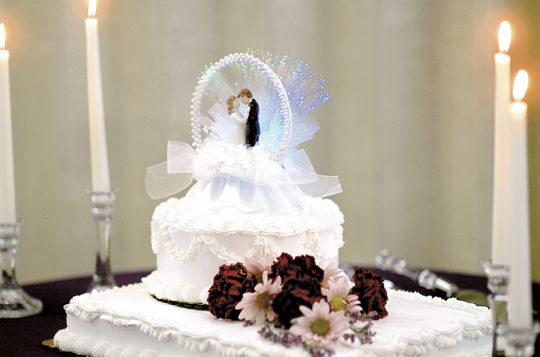 Their wedding cake sits displayed on a table for the reception. 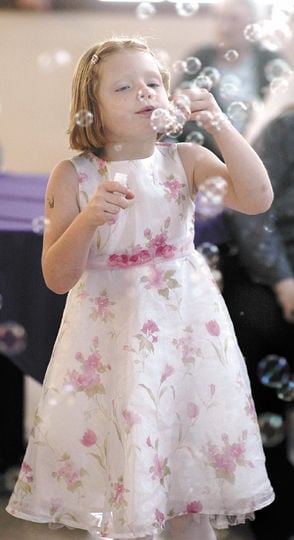 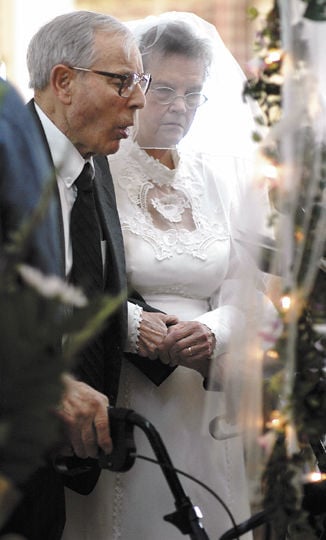 Victor Rhoda and Katherine Waldrop, residents at Manor Care Nursing Home, seal their wedding with a kiss. They celebrated their wedding at the nursing home Friday afternoon.

Their wedding cake sits displayed on a table for the reception.

neal.mcnamara@heraldbulletin.com The clergyman said, as many of his profession do, that love is patient. And with his words, 68-year-old Kathryn Waldrop and 83-year-old Victor Rhoda were married. The two, who were wed Friday at the Manor Care assisted-living facility on Madison Avenue, were treated to the full wedding platter: flowers and decorations, the traditional “Wedding March,” a flower girl, a matron of honor and friends and family members crying tears of joy. “It’s a fairy tale,” said Bev McGee, the events coordinator at Manor Care. She helped plan the event with all the other staff members. According to Waldrop, Rhoda winked at her across a table at dinner one night, then eventually worked up enough courage to ask her out. Their first date was at bingo night. “I never thought it would happen again,” said Waldrop, wearing an extravagant white dress. When she walked down the aisle, a nurse had to hold the train up off the ground. “He asked me to marry him, and we’re fully in love.” Before the ceremony, Rhoda was standing off to the side of Manor Care’s Family Tree Dining room, which was dressed in purple streamers. The ceiling of the room was shaped like a right triangle, and skylights at the top brought sun that made the room feel like a chapel. He was fixing his dentures, waiting for his bride who was sequestered in another room. And when asked if he was nervous, he shook his head “no.” When “Wedding March” began to play, Waldrop shuffled down the aisle arm-in-arm with her son Andrew. Rhoda had the ring, they had a wedding license, and all that was left was for the clergyman to bless them. “Marriage is the bond of hearts, and your wedding must stand by the strength of your love,” the Rev. Fred Savage said to them. And when it was time to make it official, their “I do’s” were not changed by their age, but were sweet and spoken like a couple half their age and with the same conviction and love. “That was beautiful,” said Janet Smith, Rhoda’s granddaughter. After the service was done, the couple kissed and then walked back down the aisle, this time as husband and wife. They greeted family who had come from as far away as Pennsylvania, and all the nurses and assistants and friends crowded in the room. “If you’re young at heart, it doesn’t matter what other people think,” said Betty Clute, 76, the matron of honor, who performed her duties smiling from a wheelchair and holding purple plastic flowers. According to McGee, the new couple will be allowed to share a room at Manor Care. Later Friday night, the two were scheduled to have a romantic dinner alone. “The honeymoon suite has been prepared,” said McGee. “All he wanted was barbecued spare ribs!”