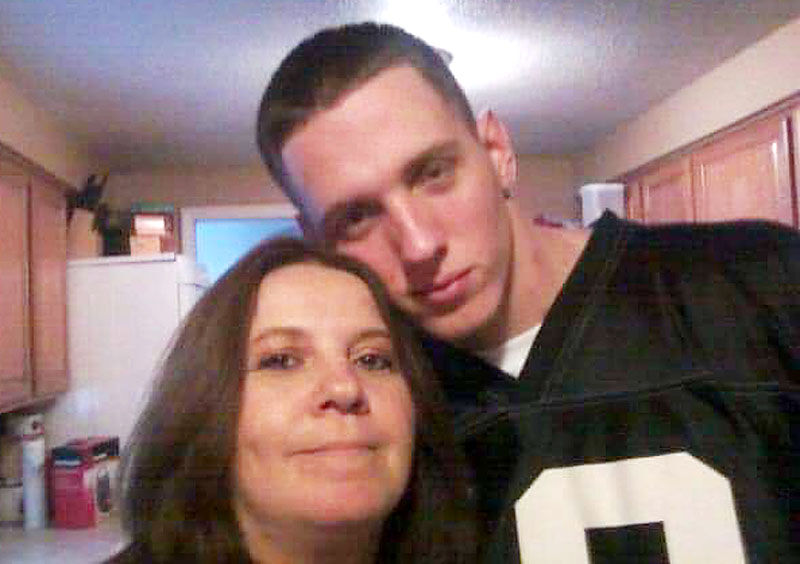 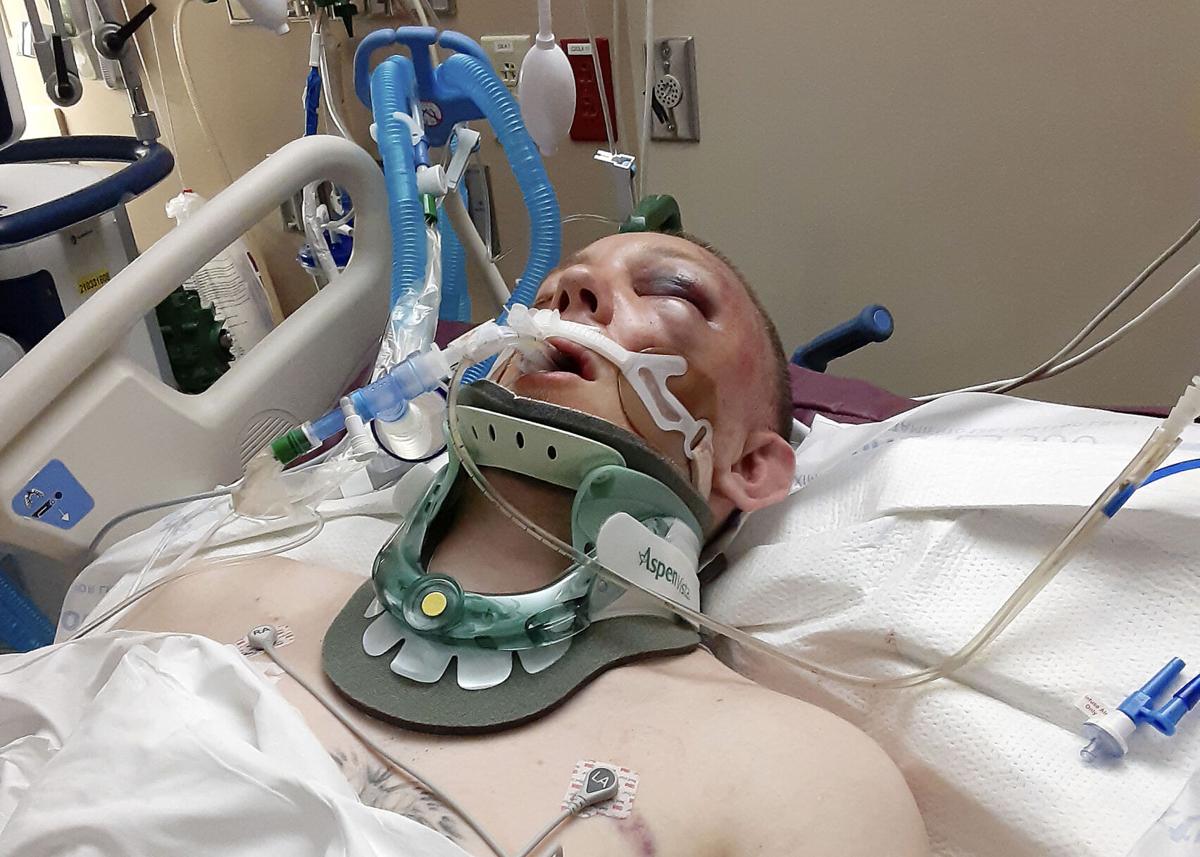 Christian Morgan’s family shared this picture of him unresponsive in the hospital after being stabbed and beaten at the Pendleton Correctional Facility in September.

Christian Morgan’s family shared this picture of him unresponsive in the hospital after being stabbed and beaten at the Pendleton Correctional Facility in September.

PENDLETON — The parents of an offender at Pendleton Correctional Facility are seeking answers and justice in the Sept. 30 death of their son believed to be at the hands of his fellow inmates.

Tonya Morgan and Frank Morgan, both of Fort Wayne, said it’s the second time their son, Christian B. Morgan, who was serving a 10-year sentence for Class B felony attempted child molest and Class D felony battery in Allen County, was attacked in an Indiana Department of Correction facility.

Officials at PCF said the facility’s only homicide so far this year remains under investigation by the facility and the Indiana State Police.

Tonya Morgan said Christian Morgan, 34, whose earliest possible release date was July 20, 2023, had tried to call her earlier in the day on Sept. 29, but she was unable to accept the call. He probably was calling to see whether she could send money so he could buy medications to help with the healing of his injuries from a prison attack two years ago.

As she prepared to leave work at 3:30 p.m., Tonya Morgan said she found a voicemail from PCF Warden Dennis Reagle.

“As soon as I got the call from the warden, I knew it was bad. My heart dropped,” she said. “He said, ‘Your son was taken to the hospital. He’s in real bad shape. If you want to see him, you better get down here.’ He didn’t even tell me he was beaten. I left work barely able to drive.”

After meeting up with her ex-husband, Frank Morgan, the pair arrived about 7 p.m. at Ascension St. Vincent Hospital in Indianapolis to find their son, who had been brought into the hospital unresponsive and with no brain activity. He had been stabbed 13 times: nine in abdomen, three in the chest and once in the shoulder

Christian Morgan’s parents went home to Fort Wayne that evening believing they would return the next day with his siblings. But they never saw their son again.

Christian Morgan died about 24 hours after the attack.

“We didn’t make it back. We only got to Markle when the warden called to say he was clinically deceased,” Tonya Morgan said.

Looking for answers and wanting to make the public aware of what happened to her son, Tonya Morgan posted photos of him on his deathbed on social media.

“I wanted everyone to see what they did to my son,” she said.

Not the first time

Nearly two years earlier, Tonya and Frank Morgan received a similar phone call to the one they received on Sept. 28.

That time, Christian Morgan was assigned to Wabash Valley Correctional Facility in Carlisle near Terre Haute. While there, he was attacked, an incident that led to a brain injury from which he never really was able to recover, Tonya Morgan said.

“He survived that, but he was not medically treated as he was supposed to be,” she said.

Christian Morgan barely survived that attack, having to relearn everything from walking and talking to signing his name, Frank Morgan said.

“The guards had to make two rounds to find him,” he said. “He had to have emergency brain surgery, and he had to learn everything.”

At one point as medical staff in Terre Haute tried to save his life, Frank Morgan said, Christian Morgan was declared legally dead.

“So he was actually killed twice,” he said.

The Morgans said they aren’t sure about the reasons for the attack but believe the one at Pendleton may have been an attempt to finish the job.

Christian Morgan was moved for a short while to Westville Correctional Facility before being returned to Wabash Valley. On July 27, 2020, he was moved to Pendleton.

“They brought him papers one day and told him he had to sign them. He was trying to go somewhere safer. I don’t know where that would be being prison,” Tonya Morgan said.

Christian Morgan was assigned to Pendleton’s mental health facility. Though the unit houses fewer prisoners, his parents continued to be concerned about his safety.

“I talked to the chaplain at Pendleton two weeks before he was killed, and he said he’s in the best block he can be,” said Frank Morgan, who last talked to his son about a month before he died.

The Morgans have said they have been unable to receive a straight story from PCF officials about what has happened to their son.

Tonya Morgan said she was told the beating happened in Christian Morgan’s cell. But PCF Warden Dennis Reagle told The Herald Bulletin it happened at 10:19 a.m. on the way back to the housing unit from the dining hall when correctional officers observed him collapsing near a stairwell.

Though he doesn’t want to divulge specifics in an effort to maintain security at the prison, Reagle, who was appointed warden at PCF in July, said officers were stationed along the way between the dining hall and the housing units as the 48 offenders, including Christian Morgan, returned to their cell house.

“Staff are stationed throughout that area, so it’s not that they’re walking with that line. They’re along his route,” he said.

About 400 staff work at PCF, of which 250 are assigned to be correctional officers, Reagle said.

However, PCF has for a while experienced a shortage of correctional officers, a situation that has been amplified by the COVID-19 pandemic, Reagle said.

“Summer is the hardest time for recruitment for us because Indiana is a farm state, so people want to be out in the field,” he said.

About 60 Indiana National Guardsmen were brought into the facility in May to help alleviate the shortage, Reagle said.

“Most of the positions they are filling are non-contact posts,” he said.

Reagle said his administration was aware of Christian Morgan’s circumstances, including his status as a sex offender and his previous attack, when he transferred from Wabash Valley and made efforts to keep him safe.

“Anything that was a special consideration already was taken into account with that,” he said.

Reagle admitted prisoners tend to operate socially according to a hierarchy and that those who commit sex crimes against children usually are at the bottom. Christian Morgan’s status as a child sex offender could have made him a mark, he said.

“Prisons do have a pecking order as far as criminals go, but that changes a lot,” he said.

PCF’s current offender population numbers 1,823, Reagle said. He said it’s uncertain how many have committed sex crimes against children because of changes in the law since some older offenders came into the facility and because charges for some offenders may have been dropped as part of plea agreements.

Though there is more than one suspect in Christian Morgan’s death, Reagle said, he won’t divulge how many as long as the matter remains under investigation. However, he said, no correctional officers are believed to be complicit.

However, once the investigation is complete and the suspects identified, Reagle said, the regular wheels of justice will start to turn, both through PCF’s Conduct Adjustment Board and through the courts.

“We have regular Indiana laws that applies to them, and they will be prosecuted under those laws,” he said.

Christian Morgan’s parents are dismayed that they have yet to receive his ashes.

His father, Frank Morgan, said his heart and lungs have saved the lives of two people through organ donation. He said he was told it’s rare for prisoners to donate their organs.

““We’re still questioning where are the ashes, and nobody knows,” he said. “His mother’s biggest fear is they will dispose of his ashes.”

Frank Morgan said the family was forced to have the memorial service on Oct. 10 without the ashes.

“We have urns. We have necklaces. We have all this stuff to hold his ashes, and we don’t have ashes,” he said.

However, Dennis Reagle, warden at Pendleton Correctional Facility, said facility officials are trying to work out a time to return the ashes to the family.