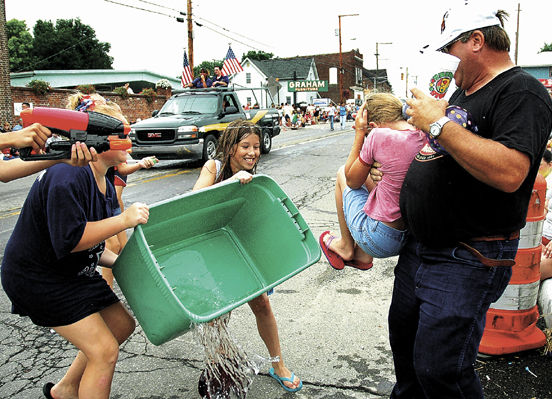 Doyle Valentine holds up Rachel Friend as girls from the Riverfield Allstars unload supersoakers and tubs of water on the pair during the Chesterfield 4th of July Parade Tuesday afternoon in downtown Chesterfield. 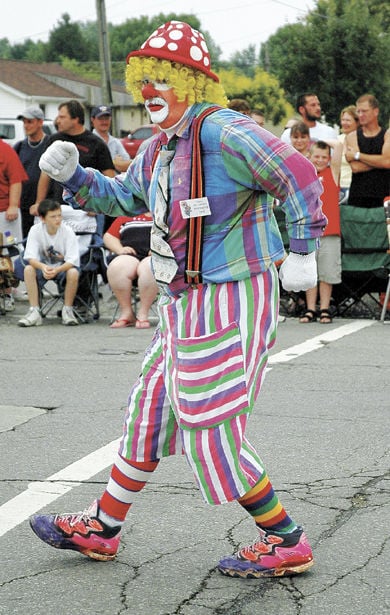 Doyle Valentine holds up Rachel Friend as girls from the Riverfield Allstars unload supersoakers and tubs of water on the pair during the Chesterfield 4th of July Parade Tuesday afternoon in downtown Chesterfield.

Five-year-old Hailey Davis stood along Indiana 32 in Chesterfield yelling to floats passing by, “Candy, candy!” As participants from around Madison County passed by during the Chesterfield Parade Tuesday some toted water guns, dowsing onlookers with water. Dressed in blue and red and smiling from ear to ear, Davis admitted the best part of the holiday for her is “getting candy and being squirted.” When asked what the holiday meant, Davis answered with a wad of pink bubble gum in her mouth, “It means that I’m going to have fun and get to do fireworks.” With both sides of Indiana 32 lined with people celebrating Independence Day, many were dressed in red, white and blue and waved small American flags. “To me, patriotism means you believe in the Constitution,” said Derek Ricker, 38. “The tradition of the fun on the Fourth helps carry on the importance of Independence Day and allows people to show their support for what they believe in. It’s important for the community.” People, even those who do not support President Bush or the war, still saw themselves as patriotic. Ben House, 17, said he does not agree with a lot of the things that are going on in the country. “I don’t agree with the war,” he said. “I think Bush lied to get us into war, but I still support the troops. I think not really being an avid supporter of George Bush is patriotic. He might be the president, but he’s not doing a good job.” “I think everybody is pretty patriotic when it comes to our country and the soldiers,” said Steve Phillips, 47, adding he believes the entire holiday is about freedom. Chip Bonvillain, 58, a Vietnam veteran and soldier for 21 years, agreed. “To me, the Fourth of July means we’re celebrating freedom and remembering the guys who gave their lives, even though it isn’t Memorial Day. Patriotism is being free and loving the country you are in.” Although Bonvillain said patriotism is very important, he believes many people don’t see it the same way. “(Patriotism) is gone to me,” he said. “I’d like to bring it back, but I don’t see anything we can do. Over the years, we’ve let it go by the wayside. There are organizations that are patriotic and I appreciate those, but we need more.” No matter what their beliefs on current events, everyone who turned out for the parade wore constant smiles. The Chesterfield July 4th Parade is run by the Chesterfield Union Township Park Board every year. “For the past two to three years, National City Bank has been our main sponsor,” said Chris Parrish, clerk-treasurer. “They made a $500 donation to cover trophies and awards.” Approximately 110 to 115 floats were entered in the parade, which lasted one hour. Floats consisted of everything from local politicians passing out information and candy, local churches and businesses to ball teams and local organizations. Parrish said with 10 categories ranging from best band to best float or car, everyone has a fair chance to take home a prize. “The parade takes a lot of volunteers,” said Parrish. “This is one of the best parades around.”