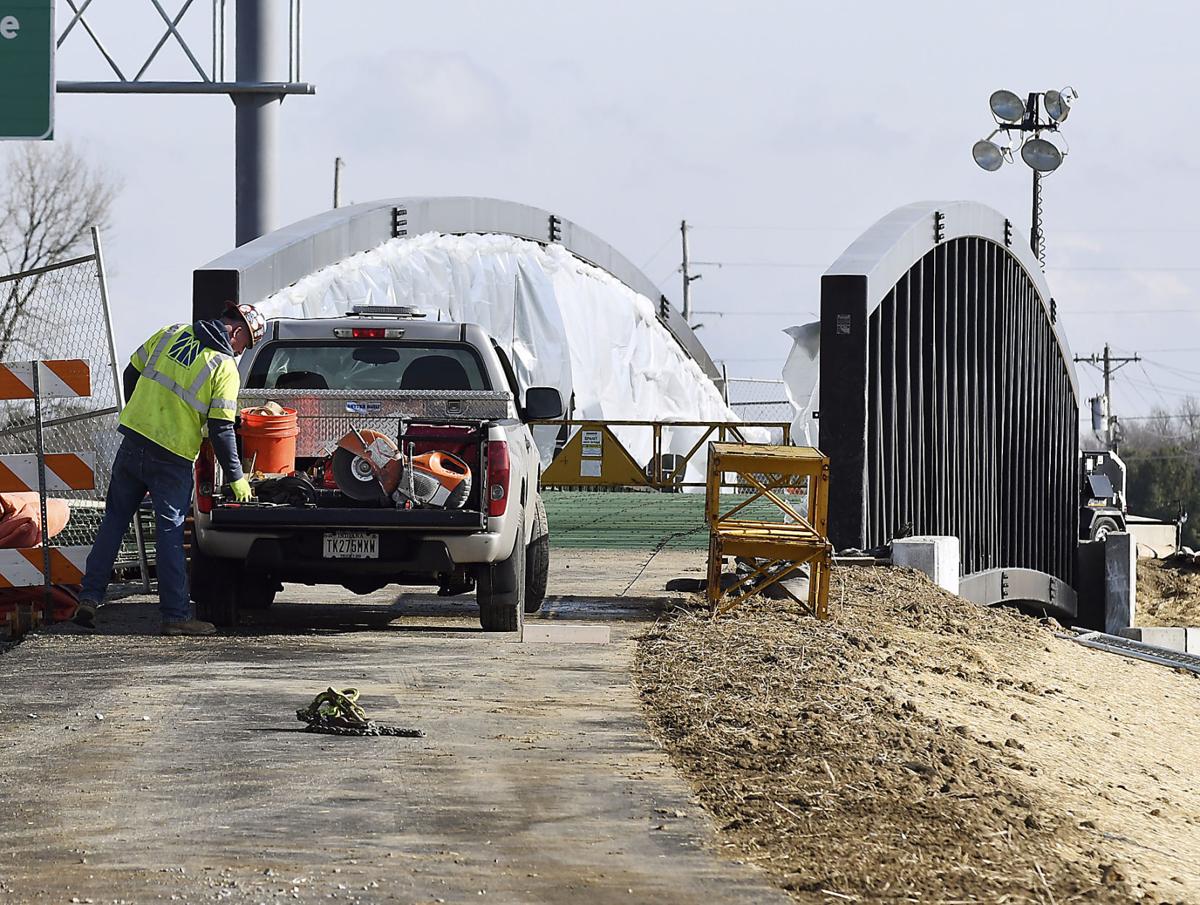 Workers continue to finish up the new bike/pedestrian bridge spanning Interstate 69 along Indiana 38 on Dec. 26 in Pendleton. The pathway is a separate span to the highway that crosses over the interstate at mile marker 219. 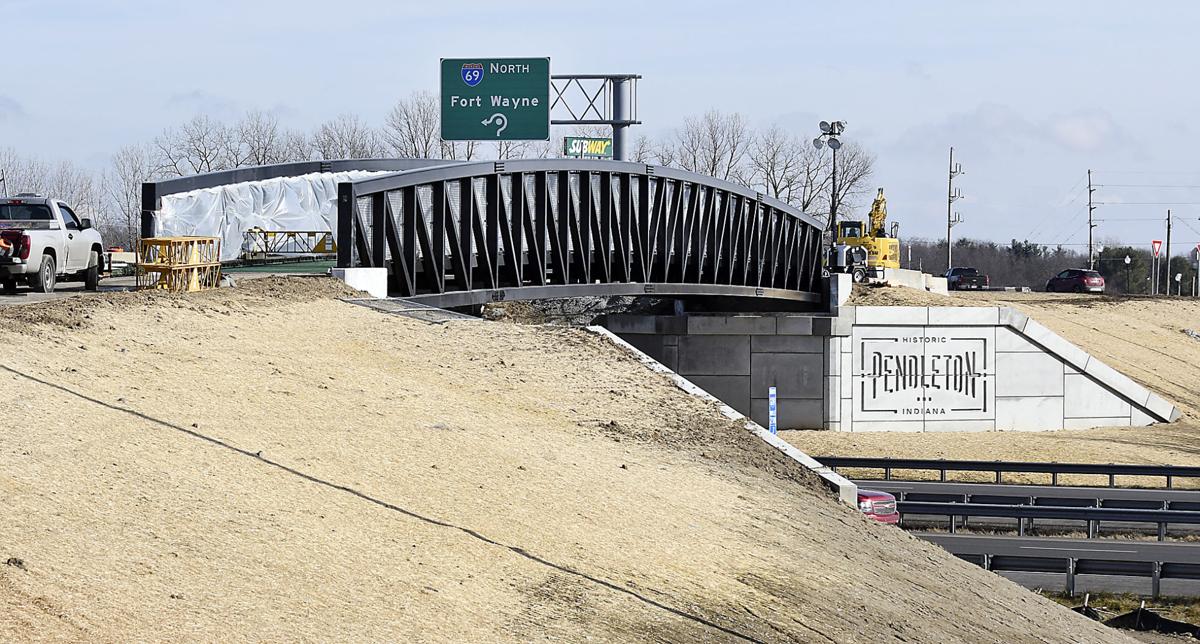 Workers continue to finish the new bike/pedestrian bridge spanning Interstate 69 along Indiana 38 on Dec. 26 in Pendleton. The pathway is a separate span to the highway that crosses over the interstate at mile marker 219.

Workers continue to finish up the new bike/pedestrian bridge spanning Interstate 69 along Indiana 38 on Dec. 26 in Pendleton. The pathway is a separate span to the highway that crosses over the interstate at mile marker 219.

Workers continue to finish the new bike/pedestrian bridge spanning Interstate 69 along Indiana 38 on Dec. 26 in Pendleton. The pathway is a separate span to the highway that crosses over the interstate at mile marker 219.

PENDLETON — More than a decade after the idea first surfaced, a bridge connecting the east and west ends of Pendleton with a bicycle and pedestrian trail over Interstate 69 finally is becoming a reality.

Though dubbed by some as “The Bridge to Nowhere” because it doesn’t connect to businesses or residential developments on the west end, city leaders say it’s a gateway to the future of Pendleton.

Pendleton Town Council member Chet Babb, who voted in favor of the project, said the $1 million bridge is part of a strategy to anticipate impending growth at Exit 219 as development creeps northward from Fishers.

“We need to look ahead, and that area out there is going to grow,” he said. “We can’t wait until we’re growing to decide we need a bridge or roundabout.”

The bike/pedestrian bridge was installed the weekend before Christmas.

Designed to mirror the historic truss bridge that spans nearby Fall Creek, Babb and Pendleton’s assistant planning director, Rachel Christenson, view the bridge as an important gateway to the town, a preview of things to come for those who take the chance and follow Indiana 38 into town.

But not everyone agrees the bridge is a good way to increase the town’s profile from the interstate, Babb and Christenson acknowledge.

The bridge is being built through a federal grant funneled through the Madison County Council of Governments, Christenson said. The town’s investment is a $200,000 match.

“We’re just spending our money wisely,” she said. “We want to make sure the people on the west side of the interstate are connected. We just don’t have a lot of ways to make that connection.”

Christenson said the bike and pedestrian path was embedded in Pendleton’s 2006 comprehensive plan and the 2016 bike and pedestrian plan, but efforts toward making it a reality started in earnest about 2014, when INDOT unveiled plans for the roundabouts also being installed at the exit.

Designers also carefully ensured it would be reflective of the historic town’s past while being useful in the future, balancing modern life with the historic values of the town, Christenson said. The town, with its well-preserved center, is on the National Register of Historic Places.

Because people are attracted to the town because of its architecture, Christenson said, the architecture of the bridge, which also could serve as a sort of destination, was important.

“It’s important that we do it in a way that reflects Pendleton,” she said. “A lot of people are afraid we’ll become Fishers.”

Among the things city leaders hope to achieve is to encourage bicyclists from Hamilton County, who turn around before reaching the bridge, to continue their trip into town, where they might spend money, she said.

“It all kind of fell into place, and INDOT was supportive of it,” she said. “With the timing and federal funding, it made more sense.”

Through discussion with INDOT, town officials learned there was no real plan to replace the bridge, but the inconvenience already caused by the construction of the roundabouts presented an opportunity to install the bicycle/pedestrian bridge at the same time, Christenson said.

“We have to be strategic as to how we do connections over the interstate because it would be costly,” she said.

In addition to the grant, Christenson said, the town was able to save money by using one designer and one contractor for all projects.

“We also didn’t have to have two construction seasons,” she said.

Though the trail ends abruptly and isn’t expected to be heavily used at first, future developments will be required to connect to it and will need to demonstrate how it will be incorporated into their plans, Christenson said.

In the meantime, she said, town officials are working on funding to connect the bridge to downtown.

According to annual average daily traffic statistics collected by the Indiana Department of Transportation, about 66,273 vehicles traveled up and down I-69 daily in 2018. However, so far this year, the traffic has been calculated at 43,658 daily, a 34% decrease.