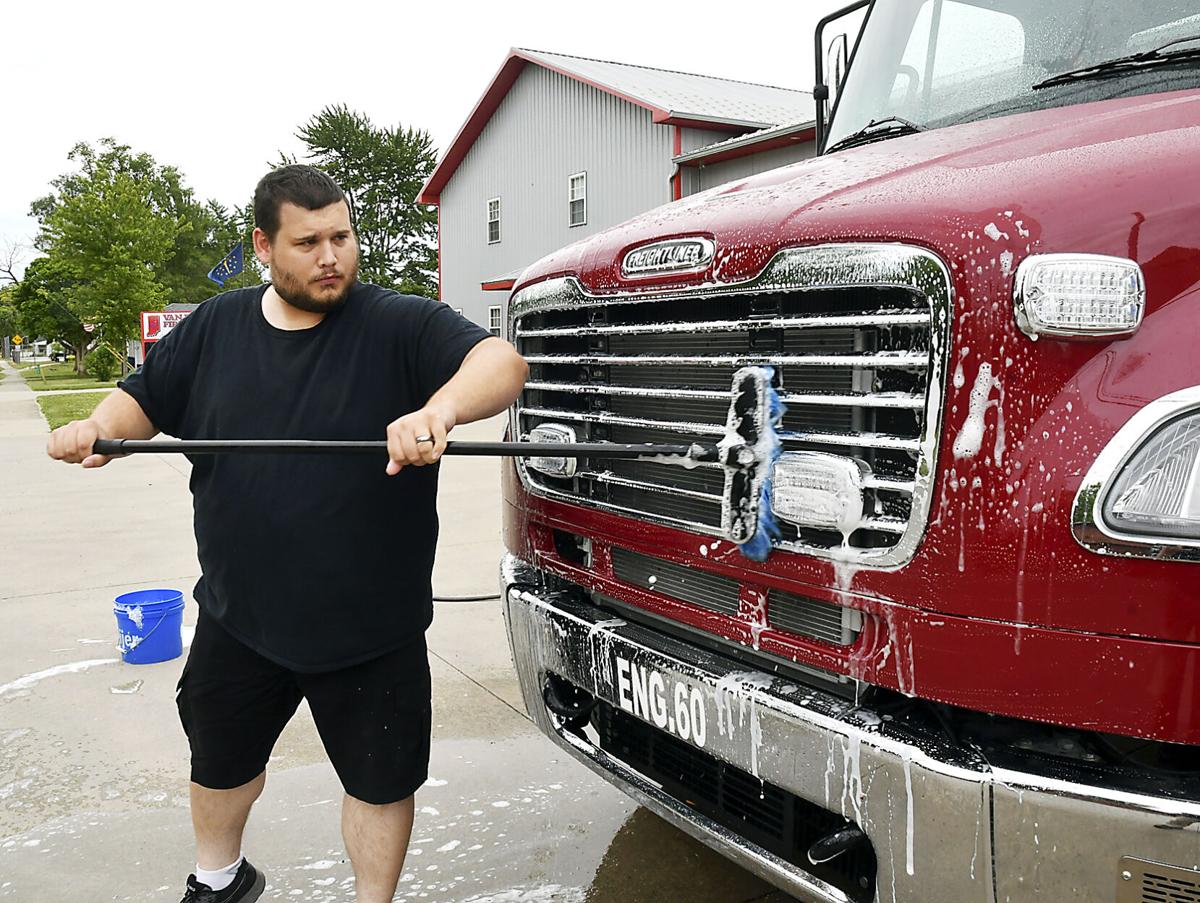 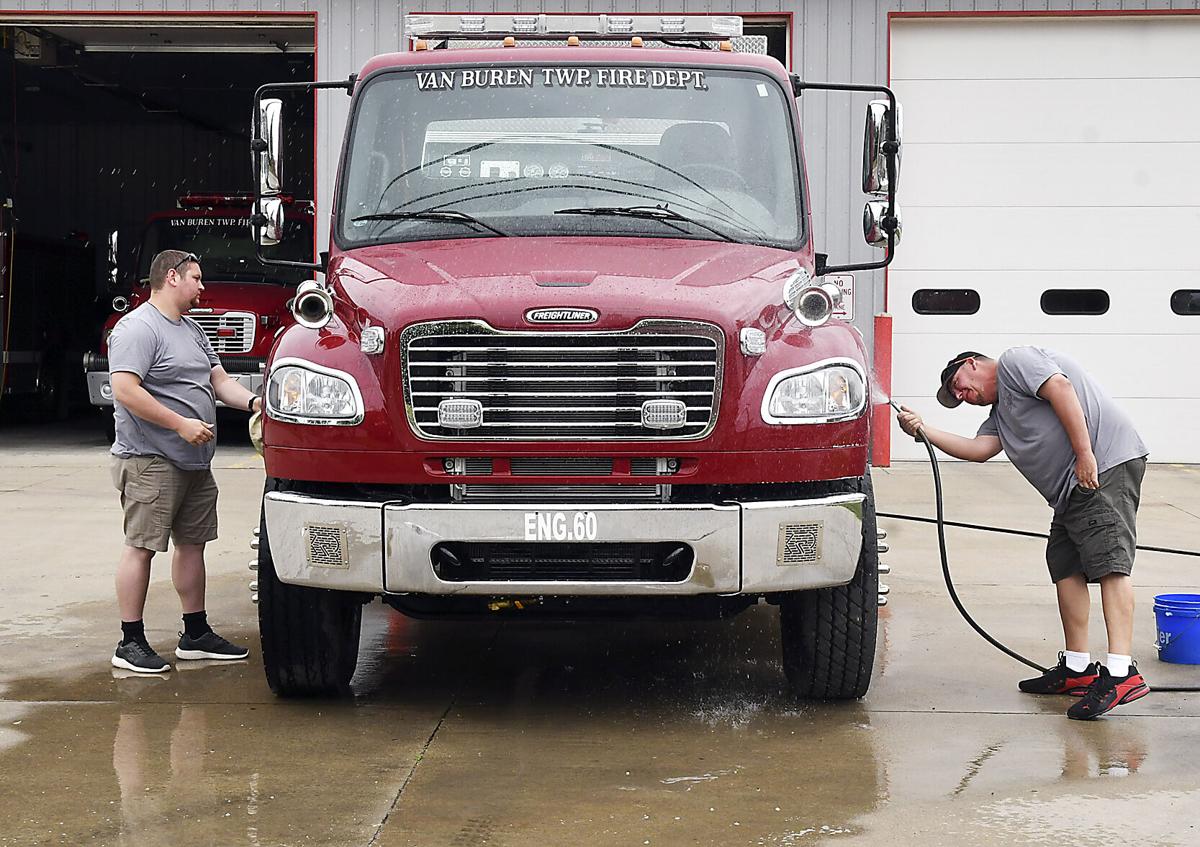 Van Buren Township Fire Department paid EMT Zac Douglas wipes down Engine 60 on one side while fire chief Coby Huggins sprays it down on the other. 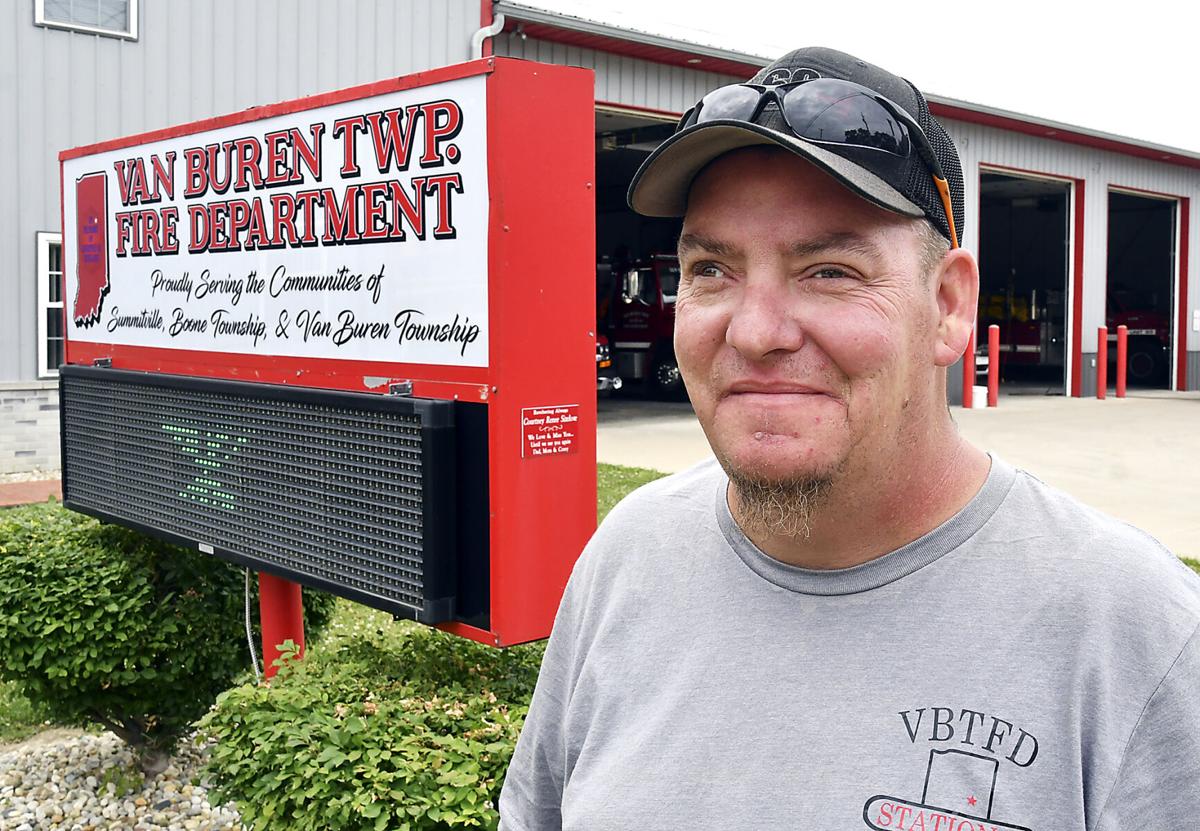 Coby Huggins is the chief of the Van Buren Township Fire Department. The hybrid department has two full-time paid employees, including the chief and an emergency medical technician, and 30 volunteers. 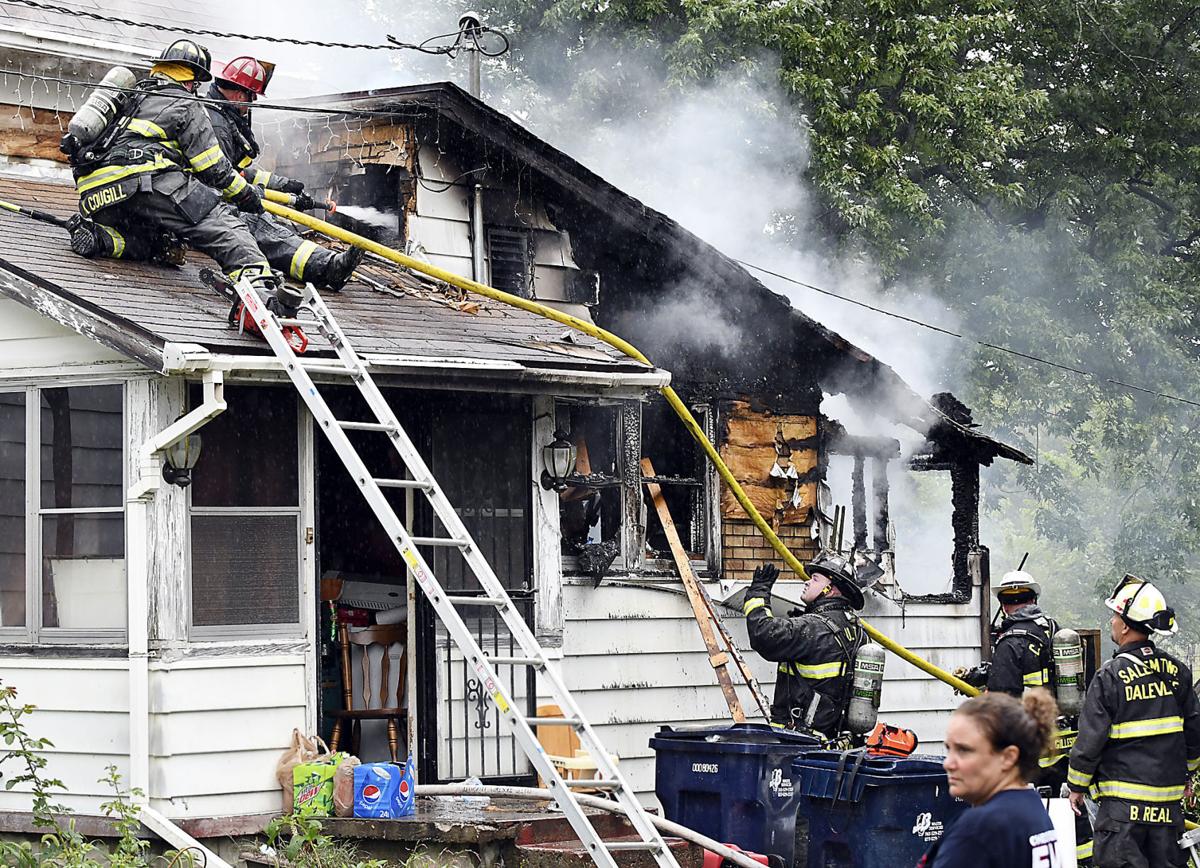 Firefighters from multiple agencies battle a house fire in the 2900 block of County Road 150 South in this file photo. Chesterfield-Union Township Fire Department responded to the call along with units from Salem, Adams and Richland townships, Yorktown, and Pendleton fire departments. The fire caused extensive damage to the structure.

Van Buren Township Fire Department paid EMT Zac Douglas wipes down Engine 60 on one side while fire chief Coby Huggins sprays it down on the other.

Coby Huggins is the chief of the Van Buren Township Fire Department. The hybrid department has two full-time paid employees, including the chief and an emergency medical technician, and 30 volunteers.

Firefighters from multiple agencies battle a house fire in the 2900 block of County Road 150 South in this file photo. Chesterfield-Union Township Fire Department responded to the call along with units from Salem, Adams and Richland townships, Yorktown, and Pendleton fire departments. The fire caused extensive damage to the structure.

SUMMITVILLE – In 1994, firefighters were called to the house that was engulfed in fire next door to where Coby Huggins lived.

“All the guys came out and I was helping them get the hoses moved,” he said.

The firefighters invited Huggins to join their ranks, and today, he serves as chief of the Van Buren Township Fire Department, which covers 56 square miles in the far northern part of Madison County.

When Huggins started there, the department was made up of volunteer firefighters. It since then has evolved into a hybrid department with two full-time paid employees, including the chief and an emergency medical technician, and 30 volunteers.

“We were having so many calls during the day, we couldn’t get anyone to cover because they have a day job,” he said. “We try to make ourselves as efficient as the budget allows us.”

Though Van Buren Township officials say they have their fire department’s staffing and budget under control, it’s challenges such as these that have some departments consolidating their operations into fire protection territories.

In the northern part of Madison County, Richland Township and Union Township already have conducted hearings, got a thumbs-up from their respective township boards and are awaiting the approval from the state to phase in their joint operation starting in January. The newly combined department would be known as the East Madison Fire Territory.

In the southern reaches of the county, the towns of Pendleton and Ingalls recently entered into a memorandum of understanding with Fall Creek and Green townships to form a new fire protection territory.

Huggins, who six months ago took over what formerly was known as Summitville Fire Department, and other trustees and fire chiefs report the number of runs has climbed exponentially, especially over the past year. In Van Buren Township, for instance, the number of runs for the first half of 2021 is about 200, about double what they were in 2015, he said.

“It seems like it goes up a small percentage every year, but this time, it went up a bunch,” he said.

No one has been able to pinpoint a reason, though some suspect part of it is related to the COVID-19 pandemic and an aging baby boom population.

“We’ve had a lot of wrecks this year for some reason,” Huggins said.

Regardless, he said, residents and businesses can expect the same professionalism regardless of whether the firefighters and EMTs on duty are career employees or volunteers, Huggins said.

“We’re all trained under the same state statute. We all do the exact same thing,” he said.

The term “volunteer” can be a little misleading. Though they don’t earn even minimum wage, Van Buren Township pays EMTs $30 per run, drivers $15 per run and firefighters $1 per run, Huggins said. Payments are made quarterly.

Firefighters who live within five minutes of the station are allowed to remain at home while they are on shift, he said.

“That’s just to cut down on the response time,” he said.

Though some fire departments report having difficulty attracting volunteers, Huggins said that’s not been a problem for him.

“I’ve got a pretty good rapport with the community and the kids,” he said. “Some of them are cut out for it, and some of them ain’t. When you figure out how much training you need, it’s not as easy as it sounds on paper.”

Larry Curl, a lobbyist for the Evansville-based Indiana Volunteer Firefighters Association, which represents more than 830 organizations, said volunteer departments are the rule rather than the exception, making up about 70% of all departments nationwide. Even so, he added, not every community in Indiana has a fire department or mutual aid agreement with nearby departments.

Even so, the association is working on providing some benefits so member departments can continue to attract volunteers, Curl said. Those include recent agreements with Ivy Tech to provide free two-year scholarships.

“We are trying to find benefits and incentives that will encourage younger people to volunteer,” he said.

But an increasing number are becoming paid/volunteer hybrids or becoming wholly career departments because of the pressures of growing expectations, Curl said.

A pet peeve, Curl said, is the belief that taxpayers in communities that don’t have their own fire protection services and contract out to nearby departments or territories should pay less.

“I don’t think it is fair for any community to pay a lesser amount than the cost of the place from where they get the fire protection,” he said. “Why should the taxpayers of one township subsidize the fire protection for another one? We want those services, but we don’t want to pay for them.”

Some people try to justify the lack of public funding for fire services by saying they supported their local department’s fish fry, Curl said. But raising money should not be the responsibility of firefighters, he said.

“There’s not a single firefighter who joined their fire department to go out and do fundraisers,” he said. “Is it fair that the members of the fire department have to raise money to keep the trucks running and the lights on?”

As an area’s population grows, as it is in Ingalls and Pendleton, which are starting to experience population pressures as the next bedroom communities for Indianapolis, it makes sense that they want to develop fire protection territories with full-time career staff, Curl said.

Richland Township Trustee Douglas Stein said it made sense for his department to join forces with Union Township because they often offer one another mutual aid.

“Our call volume has greatly increased, and certainly the expectations of emergency response has increased,” he said.

Combining the operations will deliver efficiencies in staffing and equipment costs while being able to upgrade to full-time paramedic services, Curl said.

“We still will have our unpaid on-call volunteers,” he said.

Here are the volunteer fire departments that serve Madison County: