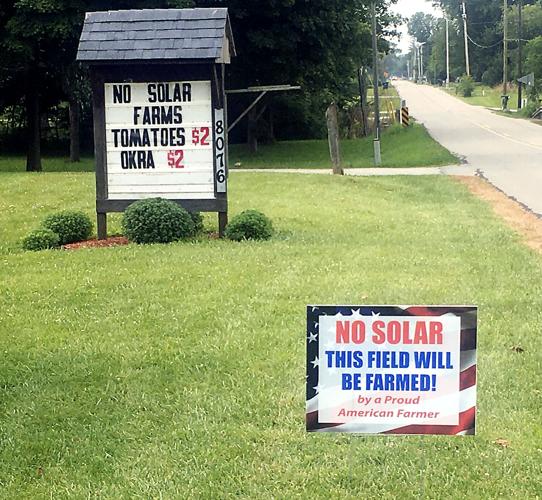 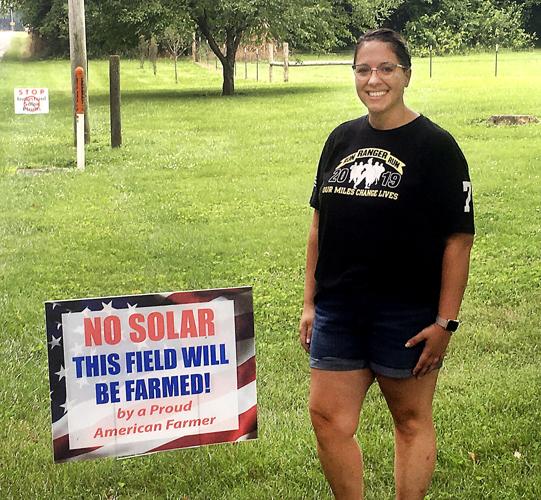 Kaele Albert, who’s against a proposed solar farm south of Markleville, said she and her family moved to rural Madison County for the rural, agricultural lifestyle. If the proposed farm’s approved, said, “there is nothing we can do.”

Kaele Albert, who’s against a proposed solar farm south of Markleville, said she and her family moved to rural Madison County for the rural, agricultural lifestyle. If the proposed farm’s approved, said, “there is nothing we can do.”

MARKLEVILLE — While local officials continue to work on a new ordinance to regulate commercial solar parks, residents south of Markleville are concerned about a potential project.

A moratorium on commercial solar parks on more than 50 acres in Madison County expired July 7. That means any application submitted to the county’s planning department would fall under the existing ordinance, considered by opponents to be less stringent than the proposed ordinance.

Kaela Albert is one of the leaders opposing the proposed solar park and a battery storage facility in the vicinity.

Albert and her family moved from Hamilton County about a year ago.

“I do work from home, and there had been a gentleman that came to our door several times,” she said about learning of the proposed solar park. “The third time he came back, I opened the door, and he asked me if I knew the landowners around here.”

Albert said the man was representing Next Era Energy and wanted to buy 1,200 to 1,600 acres of farm land for an industrial solar farm.

“My house would literally be surrounded,” she said. “No landowner has told me they have signed leases, but there are land surveys being done.

“If this goes through, there is nothing we can do,” Albert said. “Who is going to want to move to the area with very few amenities and surrounded by a solar farm in their backyard.”

Albert said if the new proposed county ordinance includes a property value guarantee, it would not make her more supportive of the project.

“I have knocked on doors,” she said. “There was not one person that has known about this until I told them about it.”

Neighbors have talked about a petition and attending meetings related to the proposal.

Albert said her family moved to rural Madison County for a rural and agricultural lifestyle.

“I may have to watch it just go away.”

Matt Hoppe lives on a corner across from a recently upgraded electrical substation; a farm field is to the east of his property.

He is concerned about a county drain on the east side of his property that has several large trees living along the drain.

Hoppe is concerned that the trees will be removed, which would give him an unobstructed view of the solar park and its panels.

He has also been trying to determine which one of the surrounding property owners might be willing to lease acreage for a solar park.

“There wouldn’t be much I could say if they build a solar park,” Hoppe said. “I don’t know how much it would devalue my property if they tore the trees down.”

Von Smith has lived in Adams Township for most of his 74 years and has a small farmstead.

A neighboring property owner said the people who own a farm field behind his property don’t intend to lease the property, Smith said. “The landowners to the west will probably sell.

“I will have to look at (the solar panels),” he said. “It all boils down to the mighty dollar.”

The absence of the current director has delayed some rezoning petitions and has caused a delay in considering the new solar energy ordinance for Madison County.