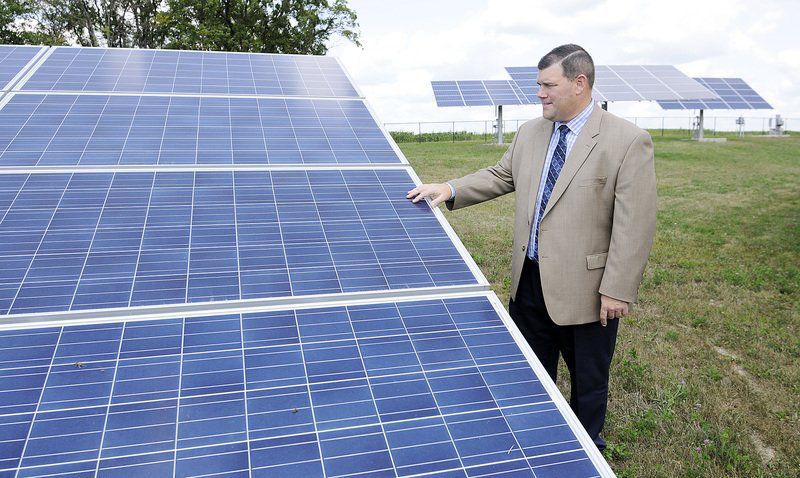 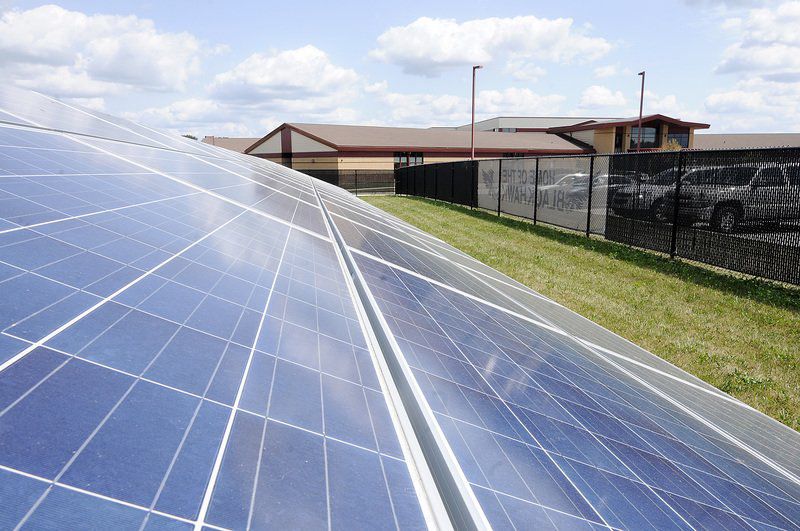 FRANKTON — Several years ago, Johnson-Melloh, an Indianapolis-based construction company, embarked on a project that will have profound effects for three school districts serving Madison County students.

Johnson-Melloh was installing on its property a compressed natural gas station used to fuel the company’s vehicles and was trying to draw attention to it through a billboard on nearby I-465, said the company’s vice president, Craig Martin.

To solve the problem of visibility at night, the company wanted to install a high-efficiency LED light but needed a way to power it. That’s when a solar panel was installed.

“Solar became an opportunity to put lighting out there to get attention for the billboard,” Martin said. “That little project led us to putting solar on our office, all over the building on our property.”

Since then, Johnson-Melloh has installed nine solar plants for its use throughout Indianapolis and moved Indianapolis International Airport toward solar by installing a 25-megawatt array.

“We’re not only selling the product, we’re using the product for our own benefit and that of our customers as well,” Martin said. “We think solar is here to stay. Everybody has a use for solar.”

Among those 15 customers are Frankton-Lapel Community Schools and Madison-Grant United School Corp., which are in the process of installing solar arrays and converting to LED lighting. Elwood Community Schools also are embarking on a similar program, using another contractor.

Each district is trying to complete the project before Dec. 31, ahead of changes in the state’s net metering law that will take effect at that time and could potentially cost money for districts seeking to use solar power. Net metering is a billing system that credits producers of excess energy they move to the grid then sells it back to them when they need it.

“It’s really beneficial to the school budget,” he said. “Every school system throughout the state should have this type of technology, especially since it’s all paid for out of non-debt service funding.”

Under the programs offered by Johnson-Melloh and WHO, the districts take out a 20-year loan for the lease or purchase and installation of the equipment. Because the average cost for the Madison County districts will be about $4 million, they wouldn’t need a bond referendum because the amount of the loan would be less than $10 million.

The districts then take the portions of the operations budgets they receive from the state to pay their utilities and put it toward the loan payments, thereby breaking even.

“The interesting thing about all of these projects for these schools is that they are self-funding,” Martin said. “In this case, they are funding it with money they would already be using for electric power.”

Under most circumstances, the schools expect to reach net zero in terms of energy use, meaning they are producing exactly the amount they need.

A district’s needs are determined through a usage study. For instance, in the case of Lapel’s schools, Johnson-Melloh analyzed five years of bills from Duke Energy.

Martin said this is the wisest use of tax dollars for cash-strapped school districts, who eventually will be able to divert the money used for electricity to other needs and maybe even earn a little money when they over-produce.

On the cutting edge

Lapel schools will be the first in the county to make the conversion. Frankton-Lapel Community Schools Superintendent Dr. Bobby Fields said his district started considering the possibility about a year ago after he spoke with Sheridan’s former superintendent Dr. Dave Mundy.

Fields then decided to put the arrays at the middle and high schools in Lapel. Frankton schools, however, will not be converted at this time because they are served by a rural electric membership cooperative.

Under current law, companies like Duke Energy are required to credit energy producers dollar for dollar. However, energy cooperatives are allowed to credit members at 30 cents on the dollar, Fields said.

“So it doesn’t make sense to do it there,” he said.

That doesn’t mean Fields won’t be looking at other solutions in the future. For instance, Frankton could store its excess electricity in a battery rather than sending it out over the grid, but that would increase equipment costs, he said.

The array for Lapel High School will be placed on three of 30 acres the district owns and rents to a farmer next to the school. Because the middle school is more landlocked, the array will be installed on the roof, Fields said.

Though preparation is taking place now, installation is expected to start toward the end of September, he said.

Fields said he expects to see a return on his district’s $4.5 million project within the first year. The district spends about $250,000 to supply electricity to the two Lapel school buildings, he said.

Most of the installation of the LED lights will take place after school and on weekends so the students aren’t disturbed, he said.

Though district officials first considered installing a wind turbine, they eventually settled on a $2.8 million solar and LED project, he said.

“Honestly, the equipment and maintenance of equipment is a lot lower than a wind turbine with a lot of moving parts,” he said.

The installation will change the face of the district as the ground-level array fills up the field in front of Madison-Grant’s administration building on Indiana 9.

The array will be fenced in for the safety of individuals and the solar panels. Deetz said he expects the chain link fencing will feature vinyl slats in the Argylls’ colors of gold and black, reinforcing district and school pride.

“It does make a positive statement for the school corporation," he said, "so we wanted to leverage that impression.”

In addition to the net metering deadline, the timeline for Madison-Grant works out as the junior senior high school’s heating and cooling system is being replaced, Deetz said.

“They really helped us dial those future requirements in,” he said of the heating and cooling contractors.

“They have to ensure we are not trying to make money and over-producing,” he said. “That true net zero won’t happen on an annual basis, but that’s because of the weather, not the design of the system.”

In September 2016, Sheridan Community Schools became the first district in Indiana to convert to solar energy and LED lighting. Dr. Doug Miller, who was named Sheridan schools’ superintendent earlier in the summer, said he believes the benefits of the $4 million project already have become apparent.

An array of educational opportunities

One of the unique elements of the solar conversions of each Madison County district is an educational component offered by each contractor for the students of the districts by which they were hired.

Under the current system, those who generate energy are credited dollar for dollar placed on the grid up to the amount they use. But under Senate Bill 309, energy will be moved to the grid at a wholesale price and returned at a retail price, meaning a loss for the producer.

School districts, however, will be allowed 30 years of net metering if their project is complete by Dec. 31. That will allow schools to actually earn money between the 20th year, when the loan for the equipment is paid off, and the 30th year when the statute runs out.