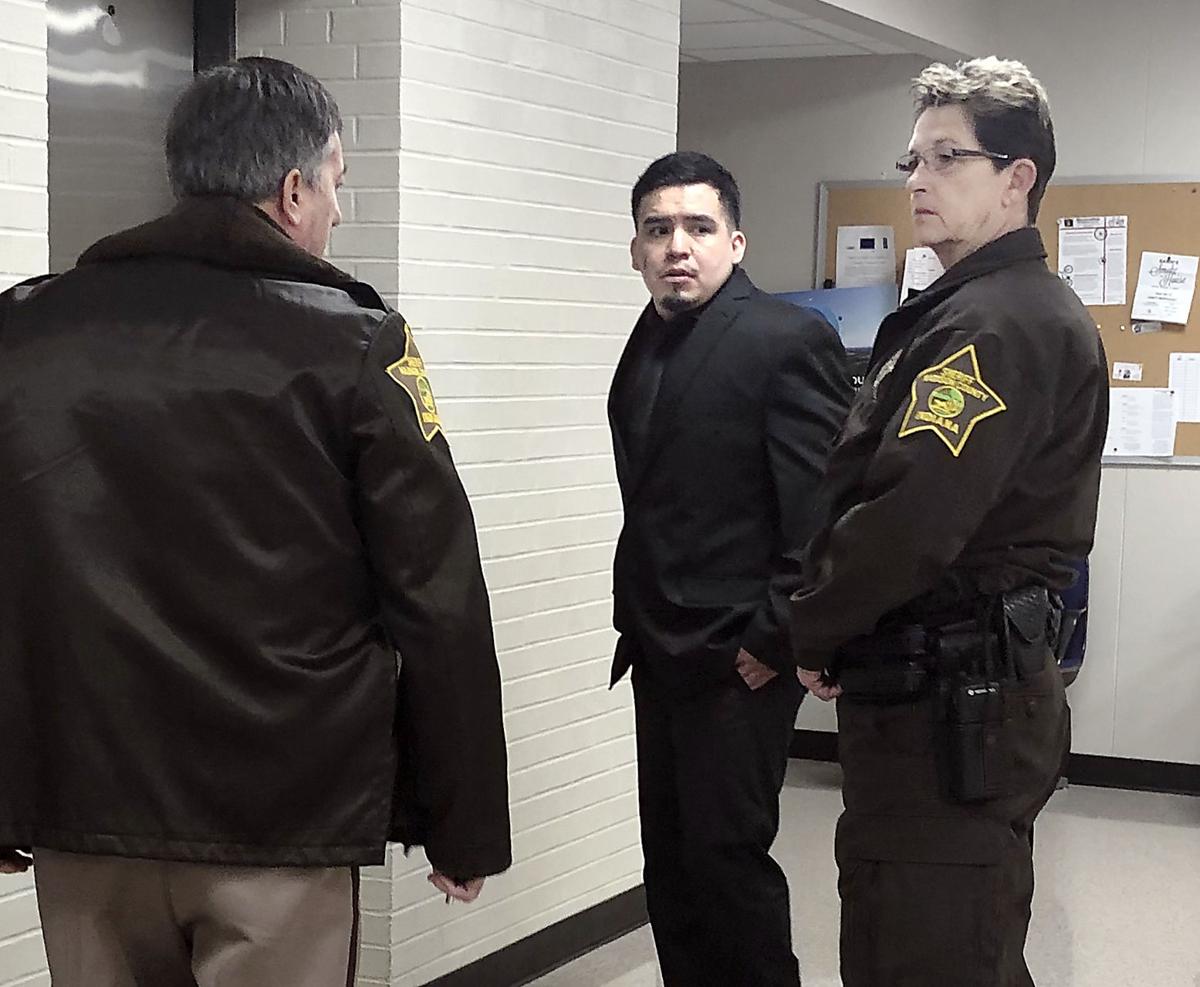 Defendant Ryan Ramirez is escorted back to the Madison County Jail by sheriff’s deputies on Wednesday afternoon.

Paisley Hudson in the arms of an unidentified Golden Corral restaurant employee. The 23-month-old girl wandered into the restaurant the night of May 29, 2018. She died two months later.

Defendant Ryan Ramirez is escorted back to the Madison County Jail by sheriff’s deputies on Wednesday afternoon.

Paisley Hudson in the arms of an unidentified Golden Corral restaurant employee. The 23-month-old girl wandered into the restaurant the night of May 29, 2018. She died two months later.

ANDERSON — Jurors listened to a slightly different version of events in the death of Paisley Hudson than the one law enforcement originally shared after the little girl died in 2018.

Kayla Hudson, Paisley’s mother, testified Wednesday that she had lied to investigators the morning she found her 23-month-old daughter “cold and stiff” in her hotel room.

Jurors also watched the last video taken of the little girl before her death, after Judge David A. Happe ruled it was important for them to see.

Happe made his ruling outside of the jury’s presence and before opening statements in the trial of Ryan Ramirez on Wednesday.

Ramirez, 30, of Chesterfield is charged with murder and Level 3 felony neglect of a dependent resulting in serious injury. Prosecutors are pursuing a life without parole sentence if Ramirez is convicted of killing Paisley and seriously injuring her brother.

The video was surveillance video at Ramirez’s parents’ home in Chesterfield taken on July 27, 2018.

Defense attorney Nathan Vining objected to the video being shown to the jurors saying it would cause jurors to speculate on what transpired in the footage, because they did not have a clear view into the vehicle shown in the video or the occupants in the vehicle.

Happe said he could not rule on the arguments made by Vining or deputy prosecutors who said the video shows Paisley and her then 3-year-old brother Riley Hudson in the sole care and custody of Ramirez.

The video shows Ramirez driving into his parents’ driveway in a van and exiting the vehicle. He then opens the passenger door behind his seat and forcefully swings his left arm into the vehicle in a hard striking motion — twice.

A moment passes and then Riley steps out of the van.

Ramirez then walks around to the other side of the van to open the rear passenger vehicle and Riley follows him. Ramirez can then be seen walking back to the driver’s side of the vehicle with Riley and Paisley following him. For a moment Riley pauses in the yard and Paisley walks up to her brother and stands before him as she reaches out.

It is unclear if Paisley is seeking comfort or offering comfort to Riley because of the quality of the video.

Riley then follows Ramirez off camera and Paisley toddles behind them before the video stops.

After watching the video, Happe ruled that it could be shown to the jurors.

Jurors were then admitted into the courtroom and deputy prosecutor Peter Beyel gave the opening statement for the state.

Beyel then showed photos of Paisley taken after her death with bruises crisscrossing her back and almost every inch of her body.

“He blames that child — not Kayla,” Beyel said showing a picture of Riley, heavily bruised, two black eyes and a ruptured blood vessel in his eye. Beyel said Ramirez told police and the children’s mother that Riley would hurt his little sister.

Vining told jurors the case is emotional and a “tragedy,” but told them to pay close attention to the evidence in the case.

She received a combined sentence of 40 years in the Department of Correction.

On Wednesday she testified she took the plea to avoid being charged with murder.

Unlike when the other witnesses testified, Ramirez avoided looking at Hudson. When their gaze did meet, both were hostile and Ramirez made a point of rolling his eyes at Hudson when she was asked to identify him in court.

Hudson said she confronted Ramirez when she noticed unusual bruising on her children who were left in his care while she was working and he would blame the marks on Riley.

She said he would call her names and accuse her of not trusting him when she asked him about the bruising on Riley’s face.

She said her children were happy around Ramirez at first, but then they became standoffish around him, whined when she would leave them with him and beg her not to go.

“They were acting scared,” Hudson said.

She said before Paisley’s death she deleted her social media account and cut ties with a lot of people because they didn’t want them to know she was living in a hotel.

Hudson said the night before Paisley died she went to work around 5 p.m. She said she carried Paisley out to Ramirez’s van and put her into her car seat. Ramirez put Riley in the vehicle.

She said Paisley told her she loved her when she left her and “seemed a little whiney.”

Hudson said she called Ramirez twice from work to check on her children that night. She said she clocked out at 10:46 p.m. and Ramirez was late picking her up, which she said was unusual.

She said Ramirez got out of the van and got into the front passenger seat when he arrived and she drove back to the hotel where they were staying.

When they got to the hotel, Ramirez carried Paisley, who was covered with a blanket, into the hotel room and she “got Riley.”

Once inside the room, Hudson said she noticed bruising on Riley and when she asked the 3-year-old what happened he told her he did it to himself.

Hudson said she took a shower and then went by herself to the store to buy cream to cover Riley’s bruises and tea bags for his eyes. She said Paisley had a doctor’s appointment on Monday and she didn’t want anyone to think something was going on.

She returned to put the cream on Riley and then went back out to buy some fast-food and to a gas station for cigarettes.

Hudson said she was ready for bed at 6 a.m. and that was the first time she checked on Paisley who had been in a portable crib in the same room with her just feet away for most of the night.

“She was cold and stiff,” Hudson said.

She said she was screaming and tried to give Paisley CPR. Hudson said Ramirez told her to be quiet and everything was OK.

She said she picked up Paisley and ran out to the van to drive her to the hospital and Ramirez followed her out telling her they needed “to get our stories straight.”

Hudson carried Paisley back into the hotel, removed her clothing and splashed water on her before going back out to the van and driving her to the hospital.

Throughout her testimony Hudson did not cry. She told jurors that the last time she saw Paisley alive was before she went to work and she has not seen her son since she left him to take Paisley to the hospital.

Hudson said she never saw Ramirez punish her children harshly and he was never physically abusive to her while they were together.

The trial is scheduled to resume at 9 a.m. Thursday in Madison Circuit Court 4.