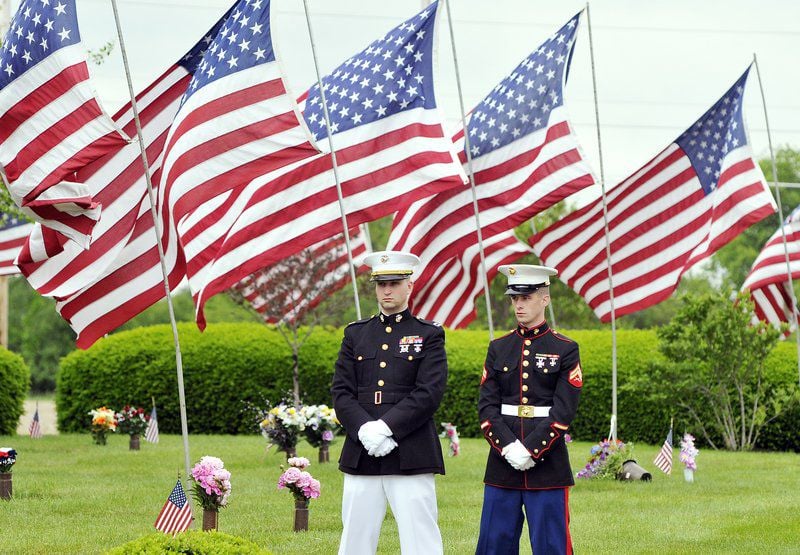 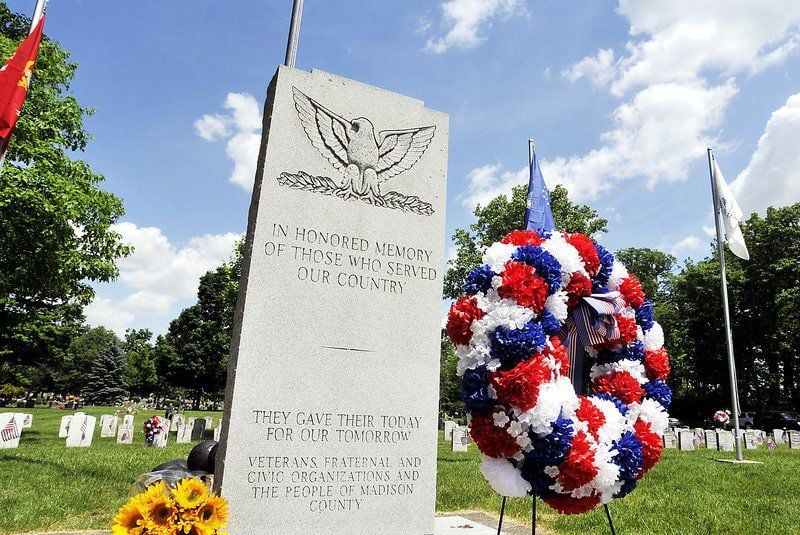 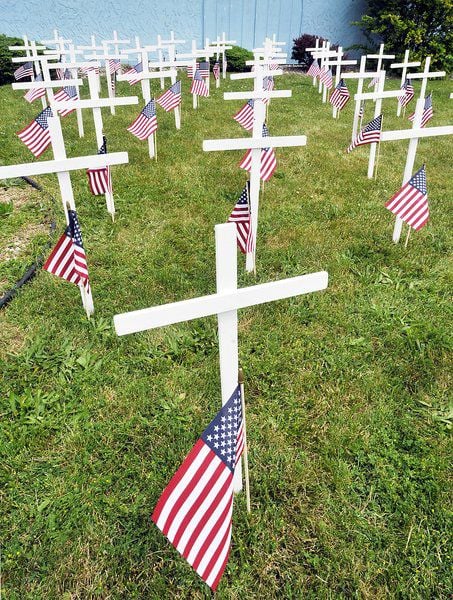 John P. Cleary | The Herald Bulletin THB File PhotoLarry Peeples, commander of American Legion Post 127, puts an American flag next to one of 48 crosses on his lawn. The crosses represent the 48 Madison County veterans who have been killed in action since the Korean War. 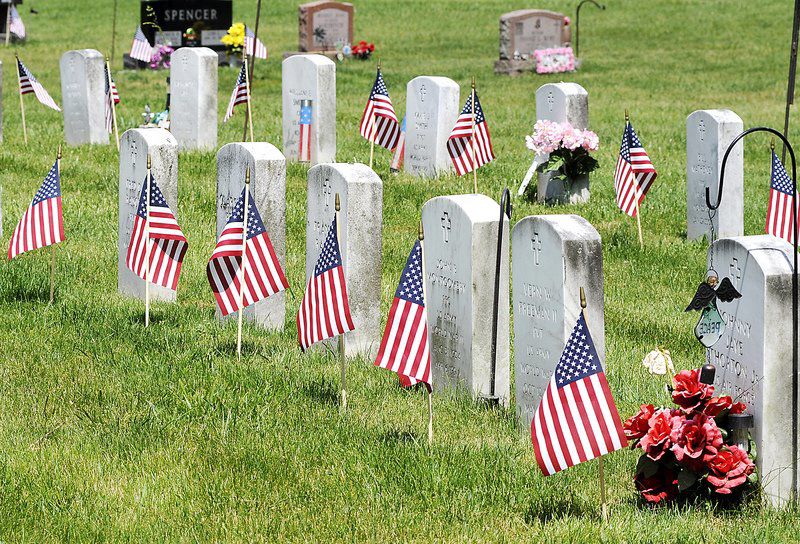 Flags are positioned at veterans' graves for a Memorial Day remembrance ceremony at Maplewood Cemetery in Anderson. 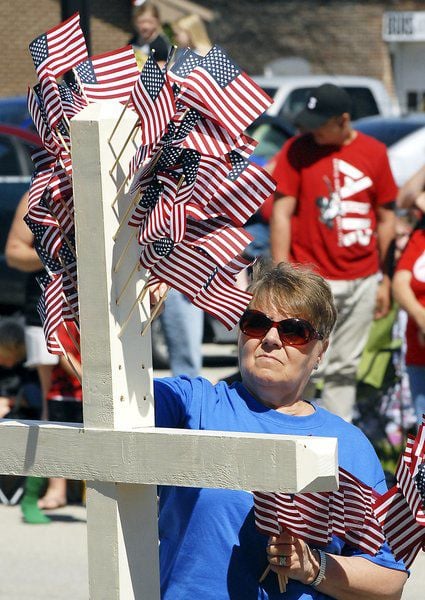 John P. Cleary | The Herald Bulletin THB File PhotoLarry Peeples, commander of American Legion Post 127, puts an American flag next to one of 48 crosses on his lawn. The crosses represent the 48 Madison County veterans who have been killed in action since the Korean War.

Flags are positioned at veterans' graves for a Memorial Day remembrance ceremony at Maplewood Cemetery in Anderson.

ANDERSON — There is a sea of tiny American flags speckling the cemeteries throughout Madison County in preparation for Memorial Day.

The flags are a silent reminder of the sacrifice and dedication of those who served their country, said Mike Wilson, the sergeant-at-arms for Anderson American Legion Post 127.

“Memorial Day is to honor the veterans that have served – whether they paid the ultimate price or the veterans still alive,” he said. “It’s still to honor all veterans and give special honor to those that have passed on.”

Wilson is one of the many veterans who walked among the headstones this weekend placing flags over the graves of his fallen military brothers and sisters.

Before Memorial Day was declared a federal holiday in 1971 and moved to the last Monday in May, the nation honored those who had died while serving in the Civil War with Decoration Day on May 30. The day of observance was expanded to honor all servicemen and women after World War I.

The once solemn holiday, however, has since become a day of picnics, cookouts and pool parties.

"There are people who were not real crazy about being where we were and doing what we were doing, but we were doing it for everyone in this country so they can live free, so they can have a good life,” Wilson said.

He urged people to attend local events honoring veterans as a way to show appreciation for the sacrifices that were made.

“There were a lot of other people who went before you to see that you live in the greatest country that is on the face of this earth,” Wilson said.

“If people see a veteran or anything, they need to thank them for their service,” he said. “I was at Lowe’s the other day and a teenage girl tapped me on the shoulder and thanked me for my service. It felt pretty good. It made me feel that the younger generation has not forgotten the veterans."

In keeping with the holiday’s original observance, here are a few things you can do this Memorial Day to honor our nation’s fallen heroes.

The flag should fly at half-staff from sunrise until noon to commemorate those who have died and raised to full staff after noon to honor living veterans.

There are countless Memorial Day parades to honor veterans throughout Indiana. Dress up in red, white and blue clothes and enjoy the festivities while you pay tribute to those who have served their country.

Visit local cemeteries or a memorial

Attend one of the many Memorial Day ceremonies taking place in Madison County to remember fallen soldiers and veterans or visit the grave of a fallen soldier and place flowers there.

In 1868, Maj. Gen. John A. Logan, commander-in-chief of the Grand Army of the Republic, issued a proclamation for a nationwide Decoration Day observance. The proclamation, called General Orders No. 11, reminds us to cherish the “memory of our heroic dead” and never forget “the cost of a free and undivided republic.”

Sharon Schweitzer, founder of Access to Culture and an international etiquette and modern manners expert, said thank a veteran by inviting them to your holiday gathering or take them a meal early in the day.

In 2000, the National Moment of Remembrance resolution was passed so that the nation could pause briefly together to reflect on the sacrifices made to provide freedom for all.

Before guests dive into the dip, thank them for joining your celebration and say a few words regarding the true holiday meaning, Schweitzer said. Recognize any veterans present and thank them for their sacrifice. She said while Memorial Day is a day of family fun, it’s important to remember why the holiday was created and honor those who gave their all.

The following Memorial Day observances are planned in Madison County:

• Elwood's traditional Memorial Day parade will start at 10 a.m. Monday in the parking lot of the Dollar General store, 1900 S. Anderson St., Elwood, and go downtown where a memorial service will take place in front of City Hall, 1505 South B St.

• Members of Boy Scout Troop 301 will lead the annual traditional Remembrance ceremony at noon Monday at Maplewood Cemetery, 200 College Drive, Anderson, on the Anderson University campus for all branches of the military. Special guests will be state Sen. Tim Lanane and a U.S. Marine veteran, also scheduled to speak, and the laying of several wreaths. The ceremony should end around 12:45 p.m.