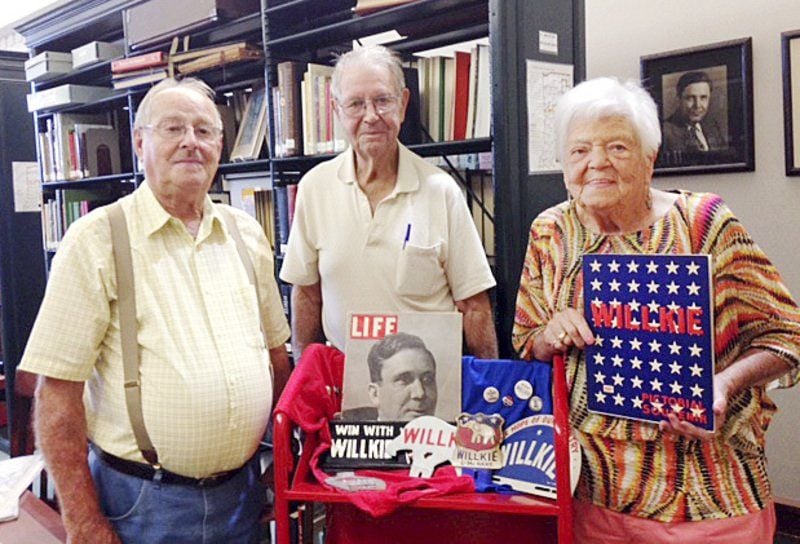 From left, Jack Garman, 86, Ferrill Wittkamper, 91, and Jane Morehead, 94, display items from the 1940 presidential campaign of Wendell Willkie, who was born and grew up in Elwood. The three are Elwood natives and lived there on Willkie Day, 75 years ago on Aug. 17, 1940. 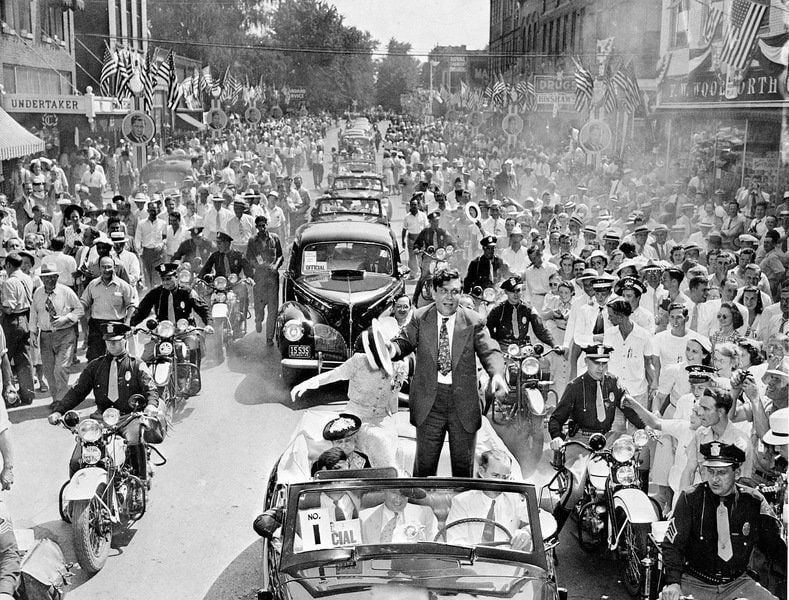 Wendell Willkie, Republican presidential candidate, parades through his hometown of Elwood, Ind., on Aug. 17, 1940. He was en route to a local park where he delivered his acceptance speech as the party's nominee. (AP Photo/John D. Collins)

From left, Jack Garman, 86, Ferrill Wittkamper, 91, and Jane Morehead, 94, display items from the 1940 presidential campaign of Wendell Willkie, who was born and grew up in Elwood. The three are Elwood natives and lived there on Willkie Day, 75 years ago on Aug. 17, 1940.

Wendell Willkie, Republican presidential candidate, parades through his hometown of Elwood, Ind., on Aug. 17, 1940. He was en route to a local park where he delivered his acceptance speech as the party's nominee. (AP Photo/John D. Collins)

ELWOOD — It was the biggest day in Elwood history.

Seventy-five years ago, on Saturday, Aug.17, 1940, a quarter of a million people crowded into the small Indiana town (pop. 11,000) to hear hometown boy Wendell Willkie accept the 1940 nomination of the Republican Party for president of the United States.

Lifelong residents of Elwood, now in their 80s and 90s, vividly recall the experience.

“I’ve never been in a crowd like that since," said Jack Garman, 86. "It was a once-in-a-lifetime event."

Garman said his strongest memory from the day was “just the sheer number of people, just the throngs, hustling and bustling.”

Back then, at age 11, Garman was free to run around Callaway Park, where Willkie would accept the nomination.

At the park, Garman's mother sold lemonade with her church’s Ladies Aid society. So he admitted he wasn’t thinking much about Willkie, just the excitement of the day. “My eyeballs must have been three times their normal size.”

That is typically the first comment by anyone who was there that Saturday. It was intensely sunny and humid, without a breeze. The thermometer hit 102 degrees by 2 p.m. Water sold at five cents a cup.

In a carnival atmosphere, people were jammed shoulder to shoulder, inching along the streets. Everyone was good-natured, chatting comfortably with strangers, united in excitement.

Imagine 250,000 people in a town of less than four square miles.

Fifty thousand cars were parked in cornfields at the edge of town. Thirty-four chartered passenger trains carried in visitors from the 48 states as well as U.S. territories. Eight hundred policemen from three states and 23 Indiana cities were in place. The national radio networks came, as did 50 newsmen from national newspapers.

People could count on making money. Willkie slogans appeared on signs, hat bands, banners, and even juice glasses. Elwood residents rented rooms to visitors. Hundreds of stands sprang up to sell food and drink. The owners of Willkie’s birthplace offered tours for 20 cents.

“You could sell anything,” recalled Don Allen.

Allen, then 10, was uptown Saturday morning selling armloads of Willkie souvenir booklets, printed by the Elwood Call-Leader newspaper, for 50 cents each.

When the parade began at noon, Willkie stood in the back of a 1940 Lincoln Zephyr convertible, waving his trademark straw hat to the thousands roaring back, “We Want Willkie!”

Willkie stopped to make a few remarks at the main entrance of the original Elwood High School; he was a 1910 graduate. Roars of approval could be heard all over town. The parade ended at Callaway Park, where Willkie made his formal acceptance speech later in the afternoon.

Cousins Jane Morehead and Ruth Wann, both 19, unmarried, and living on their family farms that August, walked the 15 blocks to town in the sultry weather with their families.

After the parade, they walked another 12 blocks to Callaway Park. They arrived in time to find good seats among the 30,000 folding wooden chairs shipped in from around the state.

Wann’s father, Roscoe Procter, had been in Willkie’s 1910 high school graduating class, and stood with his fellow graduates on the steps at the school to greet him. The VOXPOP radio station from Chicago later interviewed him.

Morehead, who lived near the former tin plate factory, was impressed by the number of train cars parked on the sidings on the factory grounds.

“I’d never seen so many trains, so many passenger cars, just the sheer number of people who stepped out of them,” she remembered.

Carl Scott and Bob Williams, now 91 and 90, were farm boys in their teens. They avoided town on Willkie Day, but they remembered the excitement. “I didn’t want to be in that crowd,” said Williams.

Scott stayed home and helped his family tear down fences on their farm, so they could park cars for 25 cents each.

Williams would vote for Willkie if he were running today. “He would have made a good president. The Willkie family was well respected in Elwood,” he said. “They were known for their integrity and fairness.”

After the weeks of careful planning, Willkie Day went off beautifully. Only 35 were arrested, mostly drunks. Of the 500 treated people for minor medical problems, most had fainted from the heat.

One disappointment for many Elwood residents was that they lost money on the thousands of sandwiches they made to sell. Maybe it was just too hot to eat.

Or it might have been the fault of the radio stations. “They warned visitors to bring their own food along, because Elwood was such a small town,” said Rosemary Frye, 88. Her family ended up making most of their money from selling water.

The lack of public restrooms was a major issue overlooked by planners, and discreetly unmentioned by newspapers. There were none, except for a few stalls in the park. Men were seen making use of the creek that ran through the park, but nobody seems to know how women solved the problem.

The next day the Elwood street crew began removing tons of trash. Bill Sigward, 90, who now lives in Indianapolis, avoided Willkie Day, but rode his bike uptown on Sunday, “just to see the mess.”

Were the beer cans really knee-deep along Anderson Street, as rumored? Bill confirmed it with a laugh. ”Some of them reached the tops of parking meters!”

In the end, Willkie lost the election to incumbent Franklin D. Roosevelt.

Ferrill Wittkamper, now 91, attended the Willkie Day events, and admired Willkie, “but probably no one could have beat Roosevelt that year,” he said.

“Everyone knew war was coming," he added. "The constantly repeated Roosevelt campaign slogan was, ‘Don’t change horses in midstream.’”

If Willkie had won

But if Willkie had won, his tenure may not have been long. Roosevelt was inaugurated Jan. 20, 1941.

Willkie's vice-president running mate, U.S. Sen. Charles McNary of Oregon, died of brain cancer on Feb. 25, 1944, so he could not have filled the term.

Under the Presidential Act of 1886, a Cabinet member would have been named to the highest office. The act was changed in 1947 so that the Speaker of the House would be next in line, followed by the President pro tempore of the Senate.