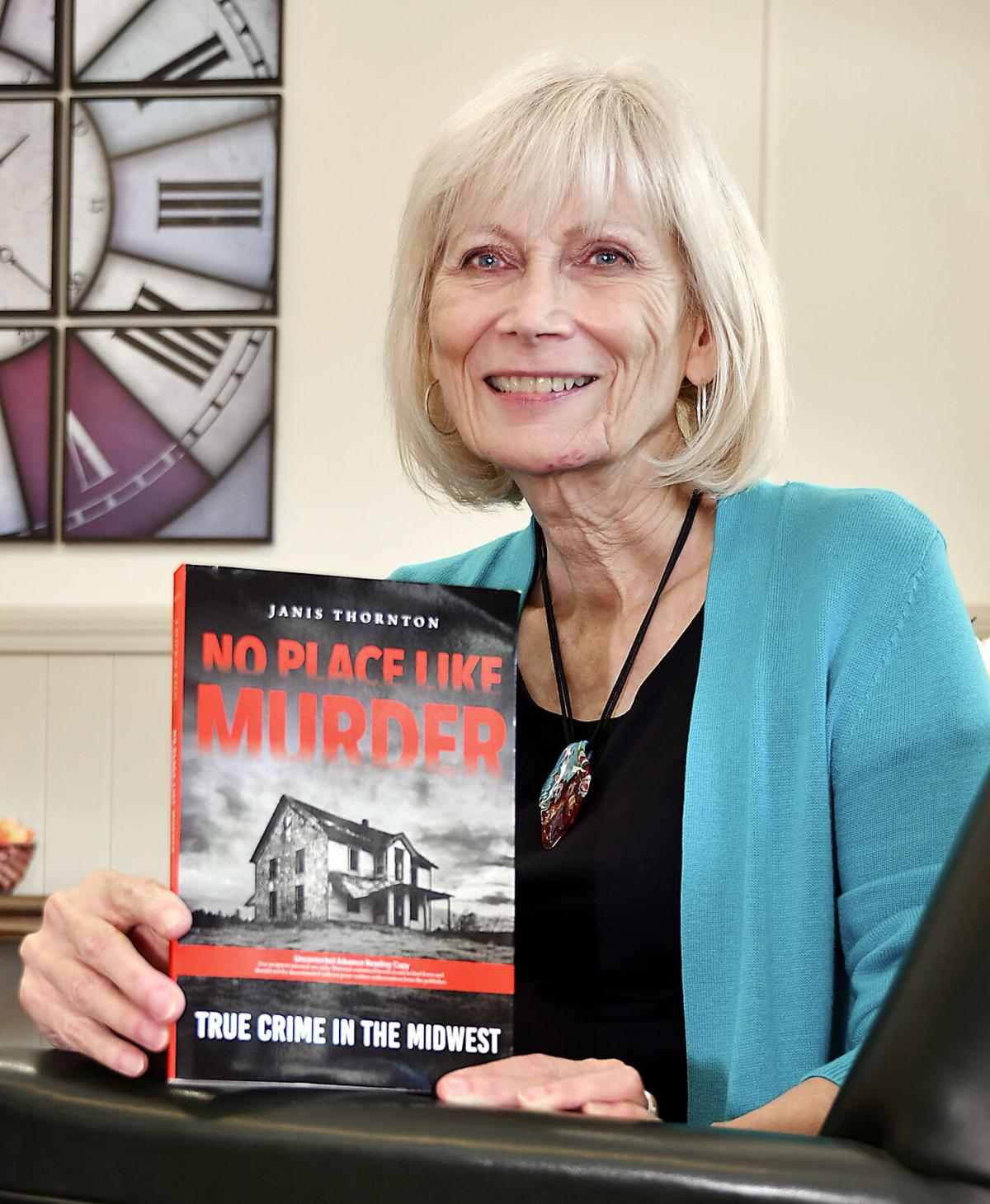 Janis Thornton shows her new book “No Place Like Murder.” 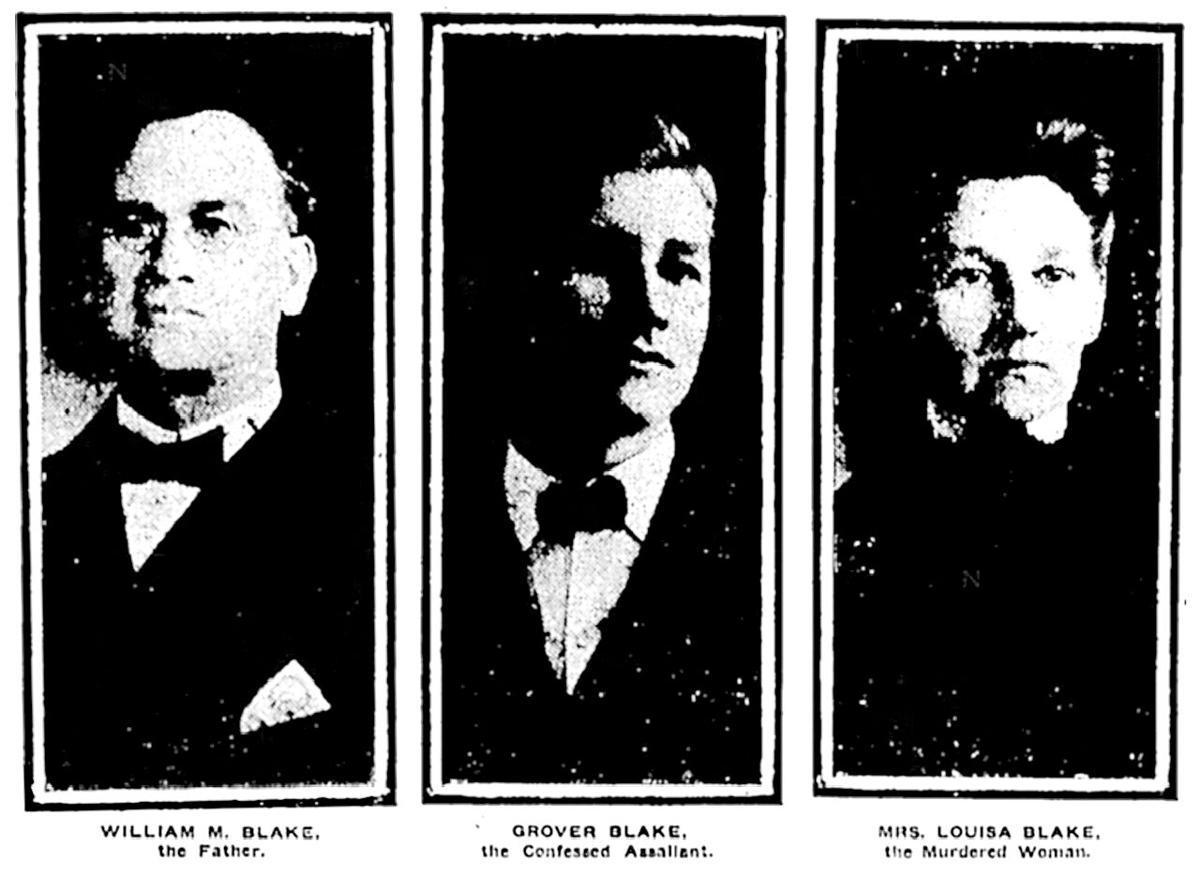 The story of the Blake family in Anderson is told in Janis Thornton’s latest book, “No Place Like Murder.” 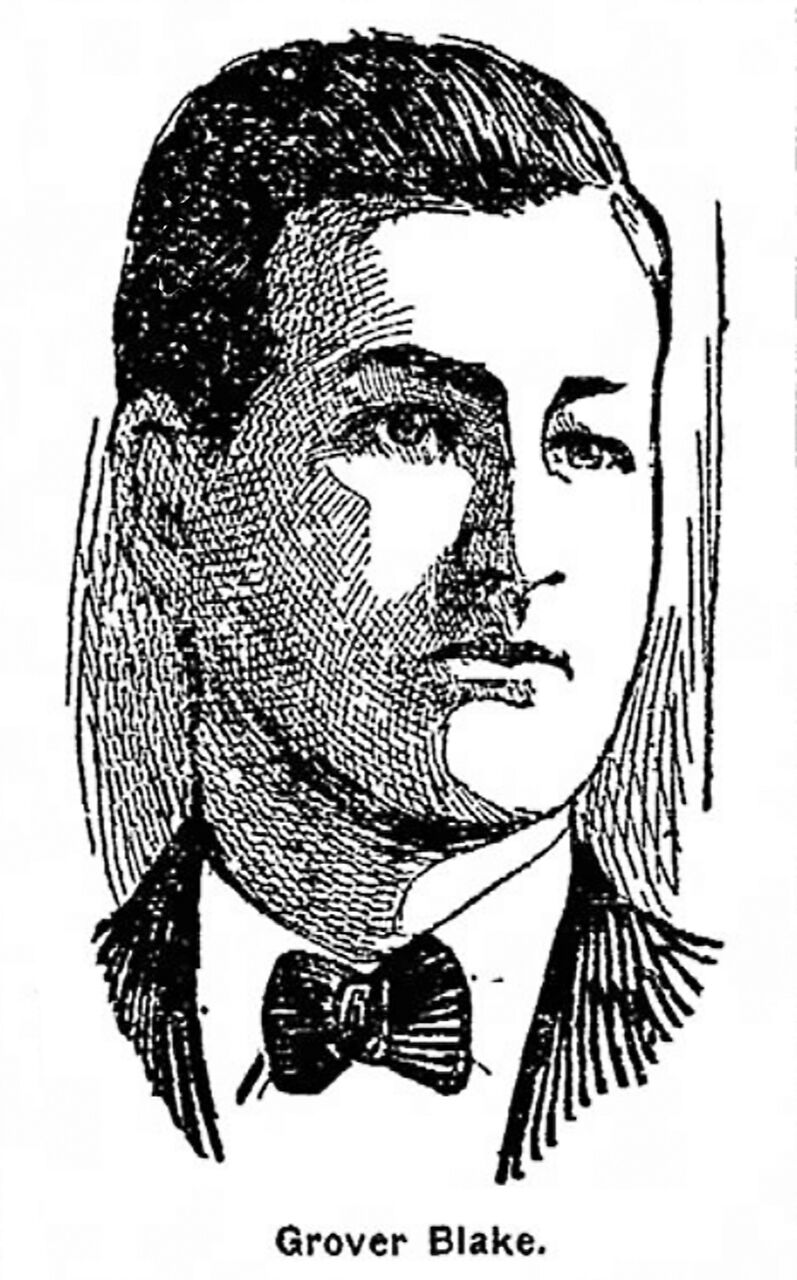 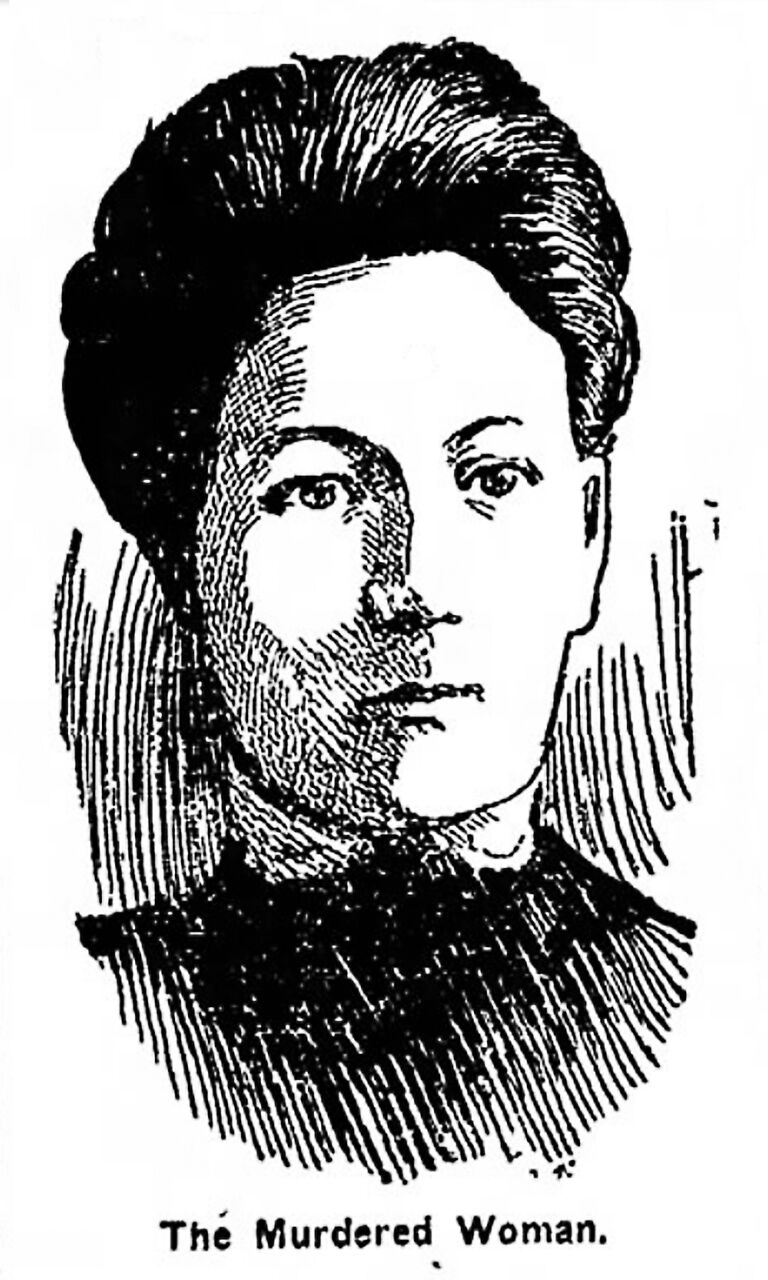 Janis Thornton shows her new book “No Place Like Murder.”

The story of the Blake family in Anderson is told in Janis Thornton’s latest book, “No Place Like Murder.”

ELWOOD — With no marker in sight, writer Janis Thornton a week ago stood in the shade of an old white oak tree she believed covered the grave of Andrew Jackson “A.J.” Baker at Beech Grove Cemetery in Muncie to take a picture featured in her blog.

She’d been to the site in June 2017 to look for the grave of the late butcher from Elwood who on Sept. 3, 1903, fatally shot Fred Kaiser, the husband of his alleged paramour, at the corner of Anderson and Main streets.

“Some might call it a shady grave for a shady character, and I couldn’t disagree,” she wrote.

The cemetery visit was part of a monthlong “Road Trip with the Dead,” to visit the final resting places of victims and murderers. The visits coincided with the release of Thornton’s latest book, “No Place Like Murder,” a look at infamous historical murders throughout central Indiana.

Baker’s killing of Kaiser was the first in the 30 years since the city of Elwood became incorporated and is one of the 20 sensational crimes that took place between 1869 and 1950 chronicled in the book. It’s one of three tales that involve people from Madison County.

Already a fiction writer with a specialty in mystery, Thornton last year turned to true crime with the release of “Too Good a Girl” about the 1965 murder of her Tipton High School classmate, Olene Emberton.

A former journalist, Thornton became interested in historical murders about 15 years ago when she found a cache of articles labeled “Local Murders” in the basement of the Frankfort Times newspaper building where she was looking for information on a 1988 homicide in Michigantown. Quickly finding what she was searching for, Thornton let her curiosity take over and went down the rabbit hole, reading the brittle, yellowed clips.

“They were riveting, told in a style that was as vivid, colorful, and sensational as any Stephen King novel I’d read,” she wrote for a promotional piece about her latest book.

In 2013, Thornton said, she started researching and writing the stories for “No Place Like Murder,” though she didn’t set a personal deadline. Initially, she thought the story about Emberton would be included in the book, but it took on a life of its own.

“I find these old stories really interesting, especially because people didn’t know about them,” she said.

Though her research started with the cache of clips and microfilm at libraries, Thornton, who now is office manager for the Elwood Chamber of Commerce, soon discovered Newspapers.com, which allowed her to go through publications manually in search of stories to tell. The ones she selected for publication had to be followed from beginning to end and provide enough detail to tell the story, she said.

In 2016, the cemetery visits actually became a part of the ritual in writing “No Place Like Murder,” published by Quarry Books, an imprint of Indiana University Press, Thornton said. About two years ago, the Muncie native who now lives in Tipton started writing in earnest.

“I thought it would be really interesting to see their graves. I did all this research, and I was to the point where I felt like I knew them, especially, the victims. I felt I was visiting an old friend,” she said. “Right from the beginning, when I visited the first place, I took pictures and figured I might do blogs.”

Ray E. Boomhower, senior editor at the Indiana Historical Society, wrote a foreword to “No Place Like Murder,” which is divided into sections labeled “Wife Killers,” “Loved to Death” and “Deadly Decisions.”

“Crime has always seemed to be something that draws writers,” he said.

Thornton’s treatment of their tragic tales, Boomhower said, maintains the dignity of the victims.

“She does it with a deft touch, I believe, and has a real affinity for the victims of these crimes. She doesn’t let the thrill for these people overwhelm her sympathy for the victim,” he said.

The real lesson from “No place Like Murder,” Boomhower said, is though we often tend to glorify the past, murder is as old as human existence and those in Indiana go back to the state’s early history.

Madison County Historian Stephen Jackson said the three local crimes highlighted by Thornton are just a tiny number of murders that have taken place here since the county was incorporated in the 1820s.

“It’s just part of our fabric. It’s a tragic part of our fabric,” he said. “Not all history is rosy. I salute her for writing about that. I think any exposure to our past, whether good or bad, is healthy for the county.”

He said there have been five major histories of the county written, and only one, “Historical Sketches and Reminiscences of Madison County, Indiana” by John L. Forkner and Byron H. Dyson, touches on its dark past.

“It has countless stories in it about murders in Madison County,” he said. “I remember when I got into it I thought, that’s a part of life. Every community is going to have that in it.”

Janis Thornton’s latest book, “No Place Like Murder” is a collection of 20 true crime stories that includes three chapters devoted to crimes committed by individuals from Madison County.

Grover Blake: Looking to get money so he could play cards, Grover Blake, 22, on March 23, 1908, bludgeoned his mother, Louisa Blake, to death at their home on South Madison Street in Anderson while his horse trading father, William Blake, was away on business in Wabash.

After the attack, Blake robbed his mother, who kept money in a pouch that hung around her neck, met a fellow gambler at a local saloon and led Anderson Police Chief William E. Smith and Madison County Sheriff Sol Smelser on a chase through Muncie and up to Fort Wayne before he was apprehended.

Blake, whose mother had implored local saloonkeepers not to sell alcohol to her wayward son, made a complete confession and a month later pleaded guilty to the crime. Based on his youth and his previously clean record, Blake was sentenced to life in prison rather than the gallows.

He died two years later of the flu at the Indiana State Prison in Michigan City. He is buried next to his mother at West Maplewood Cemetery in Anderson.

Andrew Jackson “A. J.” Baker: Suspected of a dalliance with Etta Kaiser, Baker, was confronted on Sept. 3, 1903, at the intersection of Anderson and Main streets in Elwood, where he shot to death his professional and romantic rival, a drunken Fred Kaiser. It was the first murder in the city’s history.

A controversial incident in spite of its very public time of day and location, the first trial ended in a hung jury. After he was found not guilty in the second trial in which the motive was removed when it was ruled evidence of the alleged affair could not be admitted, Baker had to be told twice he was free to go.

The former owner of a once-prosperous butcher shop, Baker who was broke following two trials, vowed to reopen his business in Elwood but ended up doing so in Indianapolis instead.

Baker died in 1929 at age 88 and is believed to be buried under a white oak tree in Beech Grove Cemetery, Muncie.

Isabelle Messmer: Nicknamed “Gun Girl” by media in 1933 after a staged photograph in which she and Pittsburgh, Pennsylvania Police Chief Franklin McQuaide held firearms on one another, the Elwood native dominated headlines from Maine to California during the Depression era.

After walking away from the unwalled minimum security New Jersey Women’s Reformatory where she was serving a seven-year sentence for assault and battery on a couple of police officers, Messmer admitted to the murder of 25-year-old Buford Armstrong, a semiprofessional baseball player. He had been found shot to death on March 30, 1939, in an Odessa, Texas, tourist cabin.

Pleading self-defense because of an attempted rape by Armstrong, Messmer, also known as the “female Dillinger,” was found guilty and sentenced to three years in a Texas prison. Following a couple of escapes that proved embarrassing for law enforcement, Messmer finally paid her debt to society.

It’s unknown what happened to her after that point.