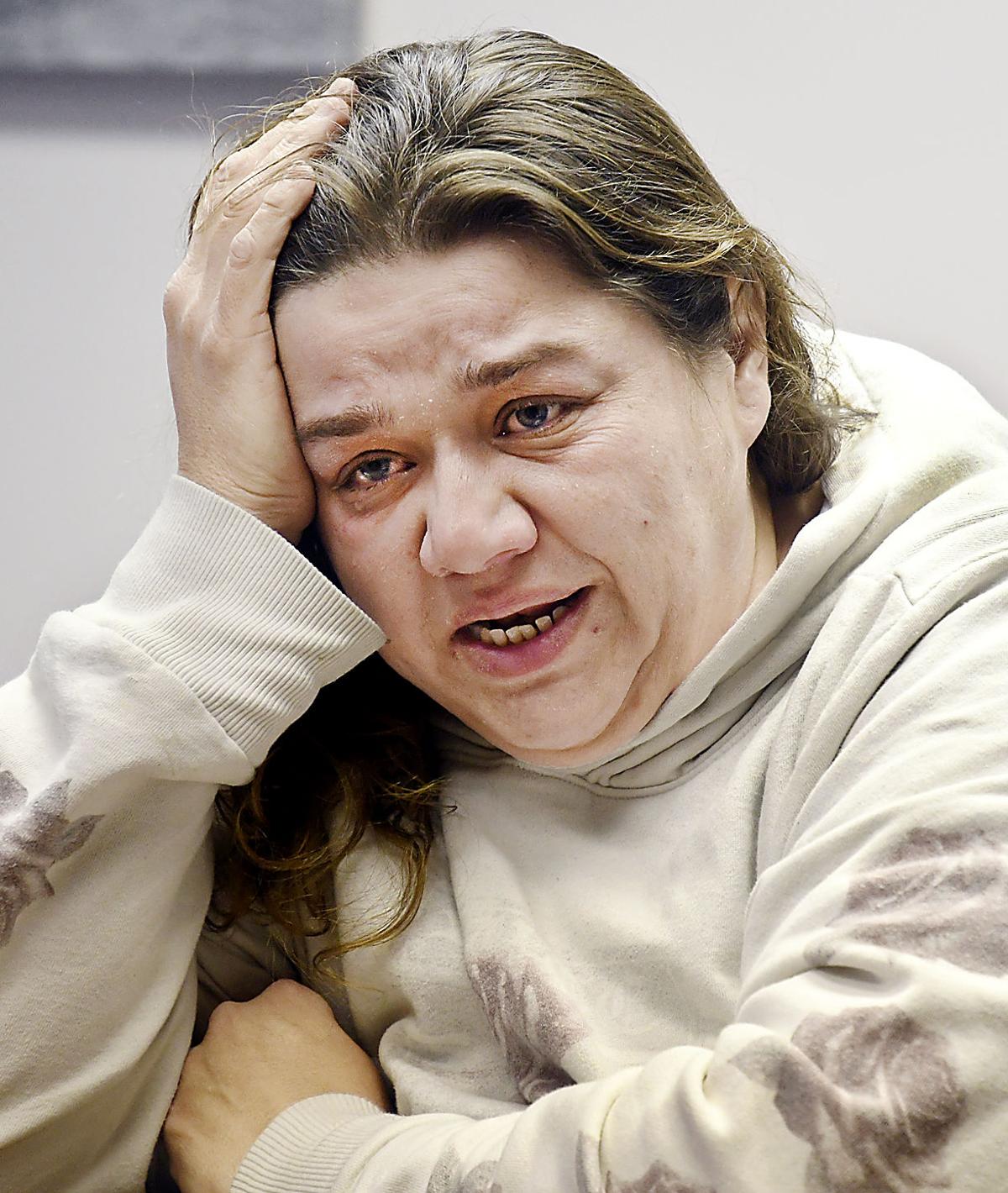 Dawn Martin lost her mother less than a week ago, is living out of her car with no income, and her husband is forbidden to communicate with her. “I can’t write him, I can’t see him — nothing,” she said. “I’ve known this man almost 27 years of my life.” 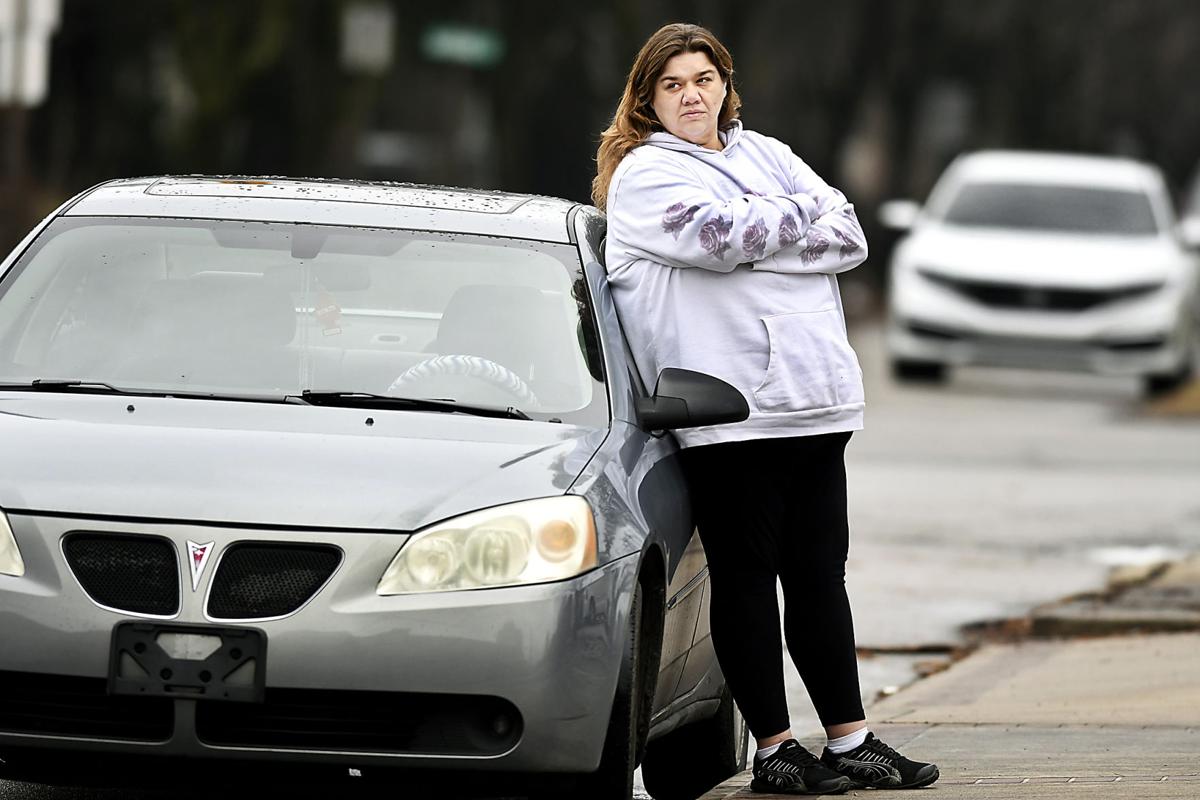 Dawn Martin says she had possessions to raise bail money for her son two years ago. Now she lives out of her car.

Dawn Martin lost her mother less than a week ago, is living out of her car with no income, and her husband is forbidden to communicate with her. “I can’t write him, I can’t see him — nothing,” she said. “I’ve known this man almost 27 years of my life.”

Dawn Martin says she had possessions to raise bail money for her son two years ago. Now she lives out of her car.

She lost her mother less than a week ago, is living out of her car with no income, and her husband is forbidden to communicate with her.

There are four no-contact orders filed in Madison County against Samuel Martin, 41, forbidding him from having contact with his wife. The first one was filed on May 21, and the other three were filed Aug. 30, Sept. 12 and Dec. 12.

But the couple remains in contact with each other.

From Aug. 30 to Oct. 14, Samuel Martin called his wife 3,807 times, according to the Madison County Sheriff’s Department.

When Samuel Martin was unable to reach his wife by telephone on Oct. 14, he is accused of attempting to escape from custody and striking a female officer in the face when she tried to stop him.

Dawn Martin said her husband tried to escape because he knew she was living in her car and was worried something had happened to her.

Authorities said Samuel Martin called her an additional 127 times while he was in custody at the Madison County Detention Center from Oct. 16 to Oct. 18.

Dawn Martin said her phone number has since been blocked by the jail.

For violating the no-contact orders, Samuel Martin was charged with Level 5 felony stalking and Class A misdemeanor invasion of privacy.

“I don’t want any of these charges relating to me to be brought against my husband,” she said brushing away her tears. “At what point are we going to stop being punished? I’m supposed to be a victim. I feel more victimized by the laws than I do anything me and Sam has ever done to each other.

“Where are my rights?”

Madison County Prosecutor Rodney Cummings said the no-contact orders are filed automatically in cases to prevent the person accused of a crime from contacting a victim. He said Dawn Martin can request to have the order dropped by the judge.

“A judge may or may not lift it, but that is up to the judge,” Cummings said.

William McCarthy, staff attorney for Indiana Legal Services Inc. and the Domestic Violence Victim Advocacy Project, explained that no-contact orders and protective orders are similar because if either one is violated, the person who violates the order commits a new crime. Both no-contact orders and protective orders are also placed in a federal database that can be accessed nationwide.

The biggest difference between them is that no-contact orders pertain to criminal cases and are made at the request of a prosecutor, not a victim, McCarthy said. Protective orders are filed in civil cases and can be both requested and dropped by a victim.

From 2017 to 2018, there were 52,437 protection orders filed in Indiana, according to the Indiana Supreme Court annual report.

Dawn Martin said her husband needs mental help, not another prison sentence. She said he has started taking medication and the couple is willing to get counseling for their marriage issues.

She admitted that her husband has been in trouble with the law before and has even served time in prison, but any threats toward her have always been empty and she is just as guilty of being physical with him when they argue.

She said the couple’s life began to unravel two years ago when their son was arrested and the couple had to come up with his $3,500 bond and they “lost everything.”

Her son was sentenced to the Indiana Department of Correction for burglary and attempted robbery in 2018. His projected release date is June 26, 2022.

The couple began to fight more and more as the stress grew, she said, but she was never afraid of her husband. She said she is 5 inches taller than him and weighs twice as much.

“It was never Sam hitting or battering me. We done it to each other,” she said. “I’m as guilty as he is, but I’m not in jail. I don’t understand how this just keeps getting worse.

“I feel more victimized by these people than I ever felt by him.”

No contact orders can be issued in a criminal case, a Chins (Child in Need of Services) case or juvenile cases. It is used to stop contact that might interfere with the court case.

For example, if you were a victim of a crime and the suspect is being prosecuted, the court can enter a no-contact order so that the suspect cannot contact you in any way.

It is possible to have both a no-contact order and an Order of Protection issued against the same person.

For more information about Indiana Legal Services, Inc., visit www.indianalegalservices.org or for help with legal services call the intake line toll free at 844-243-8570.