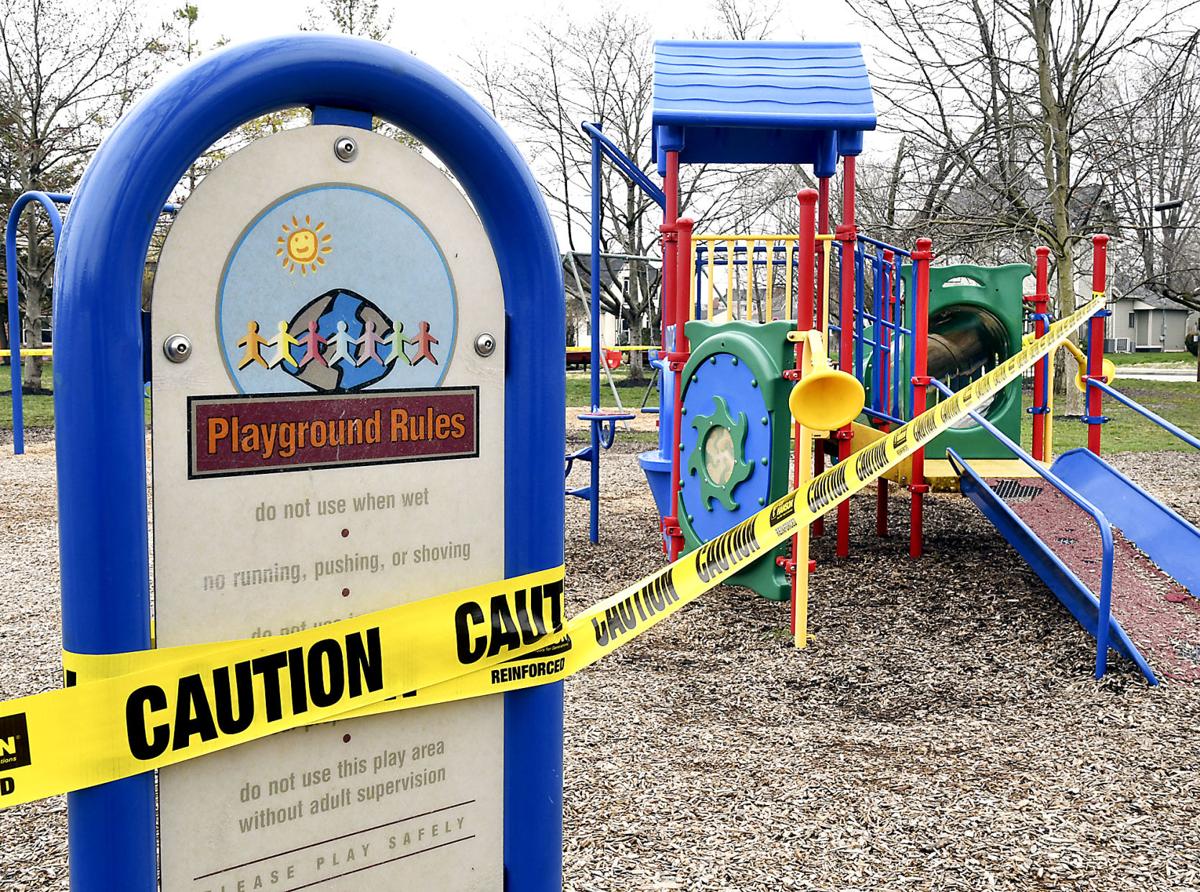 The Pendleton Parks Department cordoned off all the playground equipment in Falls Park with caution tape on Monday ahead of the governor’s stay-at-home order. 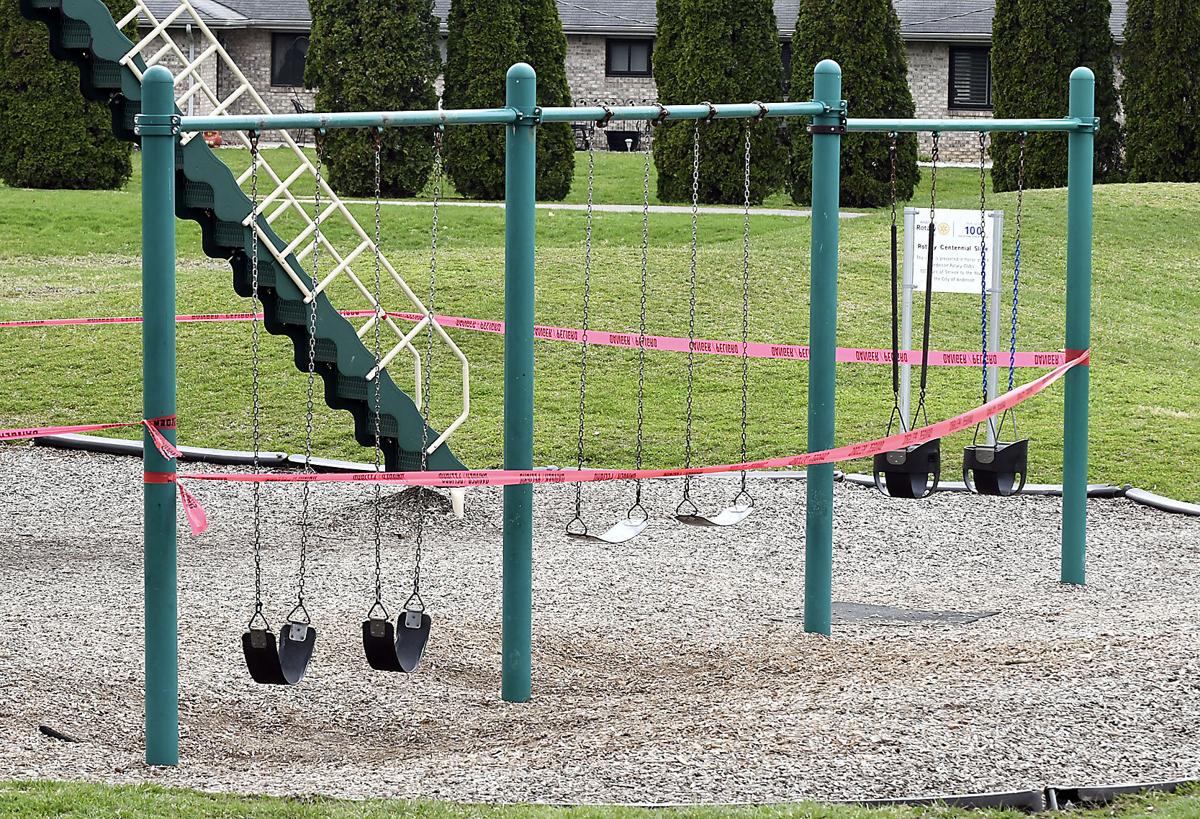 The Pendleton Parks Department cordoned off all the playground equipment in Falls Park with caution tape on Monday ahead of the governor’s stay-at-home order.

ANDERSON — The day after a sweeping executive order by Indiana’s governor to stay at home, traffic was heavy, parking lots full and the city’s parks were hopping with people in Anderson.

Some of the more popular activities at the parks included playing basketball and romping on the playground equipment – both in violation of local and state orders that are in place to reduce the spread of the new coronavirus, COVID-19.

Gov. Eric J. Holcomb’s stay-at-home order specifically states all playgrounds should be closed “because they pose a high risk of increasing spreading the virus.”

“As an update, I have been informed by the maintenance superintendent of the parks that all playground equipment, basketball and tennis courts have been taped off with caution tape, including the fitness equipment at Jackson Park,” Broderick said.

On March 19, Broderick issued an executive order that children should avoid using the playground equipment and prohibited anyone who had tested positive for the coronavirus, was in quarantine, had the flu, flu-like symptoms or any of the symptoms associated with the virus from using the parks.

The mayor also closed the city-owned Grandview Golf Course on Monday in order to limit public social interactions. He said that was the same day the governor announced his stay-at-home order that also prohibited the use of playground equipment.

“His order was more broad than my original order and I consider it to be the controlling order,” said Broderick.

The governor’s order allows for people to visit state parks or to walk, run or ride bikes near their homes, but people are required to use social distancing of at least 6 feet while engaged in these activities.

“Adhering to the order will save lives, and it is the responsibility of every Hoosier to do their part,” according to the state’s website.

The mandate applies to the entire state and, unless extended, it will expire at 11:59 p.m. April 6, according to the order.

Residents are allowed to travel to work, check on family members who need medical assistance or to ensure adequate food supplies, visit grocery stores and pharmacies for necessary supplies, but should avoid social visits and activities.

Enforcement of the order lies with the Indiana State Police, which is working in conjunction with local law enforcement, according to the state’s website. The Indiana State Department of Health and the Alcohol and Tobacco Commission will enforce the restaurant and bar restrictions.

“For your safety, as well as the safety of all Hoosiers, you should remain at home to help fight the spread of COVID-19,” the state’s website states.

Playground equipment at Falls Park was taped off to prevent its use before the governor’s announcement, said Aaron Burris, director for Pendleton Fall Creek Township Parks and Recreation.

Burris said they are now monitoring the public’s use of park benches and picnic tables, which are not regularly sanitized.

“We are just hoping that the public heeds the advice of the governor and follow his orders,” he said. “There are a lot of people not taking this as serious as one would hope they would.”

Burris said the benches and picnic tables might have to be pulled or taped off to prevent the virus from spreading from their surfaces. He said the city of Carmel closed a portion of the Monon Trail because too many people were using it at once and he hopes that doesn’t become a problem for Pendleton’s trails.

“We are asking people to practice social distancing and if there are a lot of people in an area, go to a different area,” said Burris. “We still need to do our best to slow down this spread.”

Frankton Park Board President DJ Hancock said they have not taped off the playground equipment, but he has considered posting signs at Jefferson Oaks Park.

“I haven’t seen anyone on it,” he said. “But we are putting the word out and doing what we can. It’s not really sanitary.”

Elwood Mayor Todd Jones said the city has posted on its Facebook page the equipment is currently off limits and “people have done a nice job so far of staying off of it.”

Like other communities, he said, they are closely monitoring the parks and taping the equipment off is a possibility in the next day or two.

“It’s something we are definitely considering,” he said. “We want to keep our residents safe.”