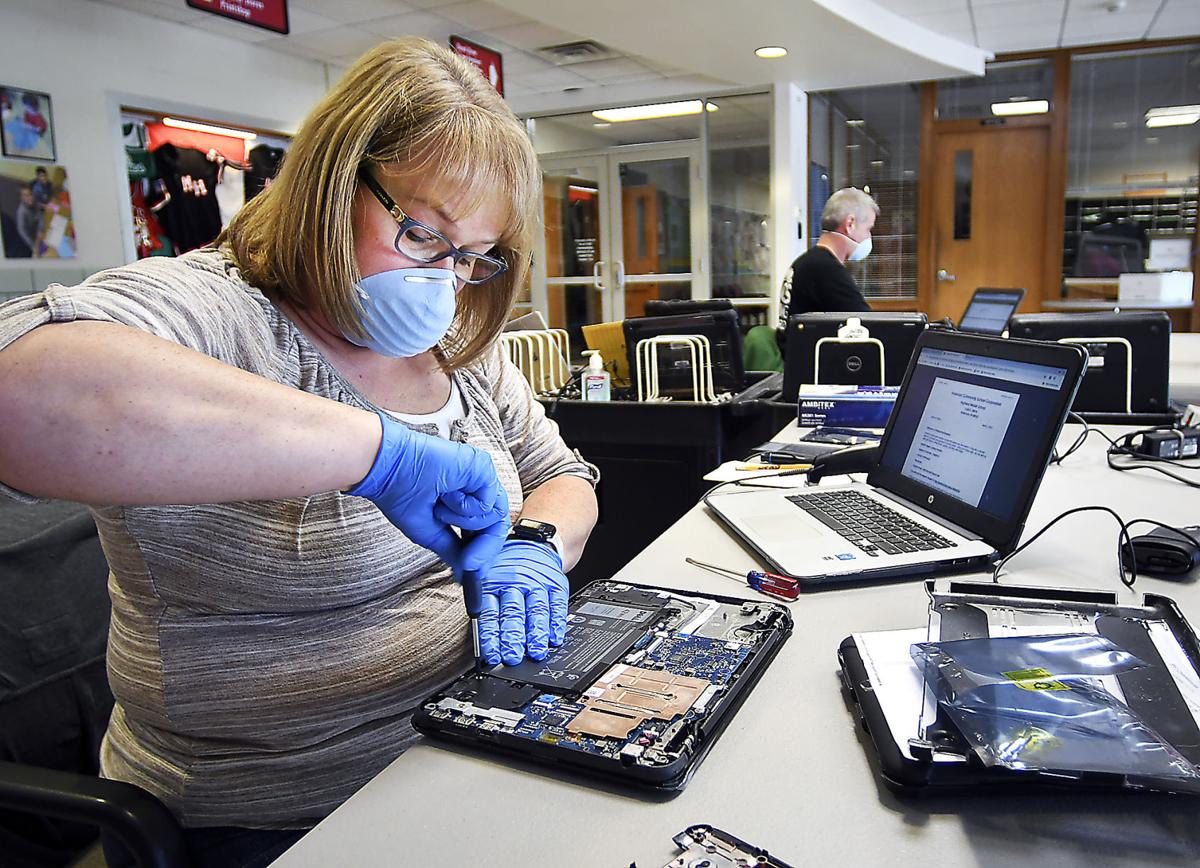 Anderson Community Schools staff member Mary McCammon puts a new battery into this unit as ACS offers Chromebook repair service for students since they are on e-learning for the rest of the school year. 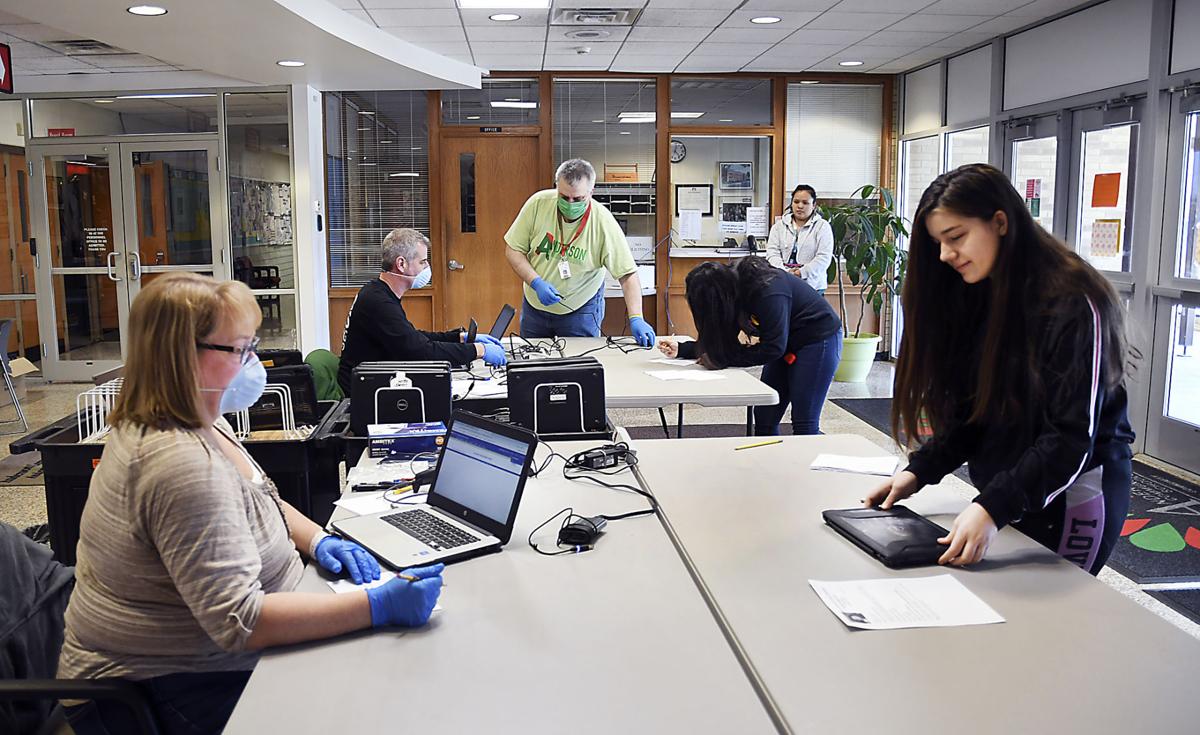 Anderson Community Schools offers Chromebook repairs for students in grades 7-12 in the lobby of the ACS administration building.

Anderson Community Schools staff member Mary McCammon puts a new battery into this unit as ACS offers Chromebook repair service for students since they are on e-learning for the rest of the school year.

Anderson Community Schools offers Chromebook repairs for students in grades 7-12 in the lobby of the ACS administration building.

ANDERSON — One of the challenges of unexpectedly moving from in-person classes to e-learning for most school districts because of the COVID-19 pandemic is the care and maintenance of the devices sent home with students.

Anderson Community Schools has resolved that problem by offering families an opportunity on Tuesdays to bring their Chromebooks to the administration building where the devices are repaired while they wait. If the problem is under warranty, repair times can be longer as the devices are returned to the manufacturer.

Vaughn McCoy, assistant director of computer service at ACS, said typically when students have a broken screen or dead batteries with their Chromebooks, they take them to school and let someone there know about the problem. In most instances, the students are given a loaner so staff have a day or two to check out the devices and fix the problem.

“Typically, our techs are covering everything else, not just Chromebook repair,” he said. “The first week or two, we were really busy, and I think we have gotten caught up.”

In ACS, Chromebooks have been issued only to the roughly 1,700 students at Highland Middle School and Anderson High School. Though they have them available in the classroom, students in the younger grades have been issued packets during weekly meal distributions during the national health emergency.

However, it’s likely all students will be issued take-home devices next year because of a likely resurgence of the novel coronavirus, McCoy said.

“We have some on hand that we can use. There are devices in the schools that keep us from having to buy all of them,” he said.

The district has offered its 1:1, or One to One, program in which each student has access to a device rather than having to share one in a computer lab for about five years. Having the devices is important, especially for students as they prepare for college and the workplace.

“We still have families that can’t afford technology. It helps my heart to know that giving them a 1:1 device to take home helps them get comfortable with it,” he said.

McCoy estimates between 75% and 90% of instruction is delivered using Chromebooks rather than textbooks, depending on the class and the preferences of the teachers.

“The lower grades, it’s hard to know. There are still more options there for the textbooks,” he said.

Over the weeks since the students have been away from school, the district has repaired as many as 15 devices per session, McCoy said.

“That doesn’t sound like a lot, but when you have three people working on Chromebooks and some repairs take 10 minutes and some take half an hour, that feels like a lot,” he said. “As we get closer to summer, that number will go down.”

Most schools and districts in Madison County and surrounding communities are in a similar position and must make arrangements so students can have their devices repaired.

Tina Neal, principal at Holy Cross School, said distributing devices to students has been invaluable in terms of the school’s ability to continue the educations of the students through Google Meet, which allows teachers, students and parents to interact in real time.

Her school’s technology leader is available to help with technology needs in the parking lot during free meal distributions on Mondays and Wednesdays. If she is unable to repair the problem on the spot, the student is given a loaner.

“Holy Cross School parents have been very supportive and have provided internet access to their students,” Neal said. “We have utilized e-learning in the past, and parents were prepared because of previous e-learning Days. Our teachers have provided paper packets also. The paper packets have been given to all students in order to provide another format of learning during this time.”

Anderson Preparatory Academy and Frankton-Lapel Community Schools, as well as several others, have as part of their e-learning plans, provisions to help parents and students to deal with questions and technical difficulties remotely, as a first line of defense. However, for those with persistent problems, an appointment can be made to bring in the device for service.

However, health and well-being remain a focus, even if an in-person visit is required, said Joe Buck, superintendent at South Madison Community Schools.

“A variety of procedures including placing the devices in plastic bags along with the use of masks, gloves, disinfecting wipes, and UV light have been used to keep both the families and our computer techs safe during the exchange and repair process,” he said.

Jay McCurry, superintendent at Liberty Christian School, said members of the IT team go to the students rather than having students come to the school.

“They have actually made home visits and dropped off and picked up Chromebooks so that students do not have to leave their homes.”

As the school year comes to an end, one of the questions that has arisen is how districts will go about getting back the devices, which represent a hefty financial investment.

Officials at Anderson Community Schools have decided they will worry only about the return of Chromebooks issued to Anderson High School seniors, who are being asked to return their devices when they pick up their caps and gowns for graduation.

“The other students, I think, are going to keep theirs through the summer. There’s no way to pick those up,” said Vaughn McCoy, assistant director of computer service at ACS. “We have families that aren’t able or just don’t show up.”

Though districts in the past often have lost textbooks because of student mobility as they transfer from one school to another, this isn’t really a problem for ACS, McCoy said. That’s because the devices are tied to the district’s Google account.