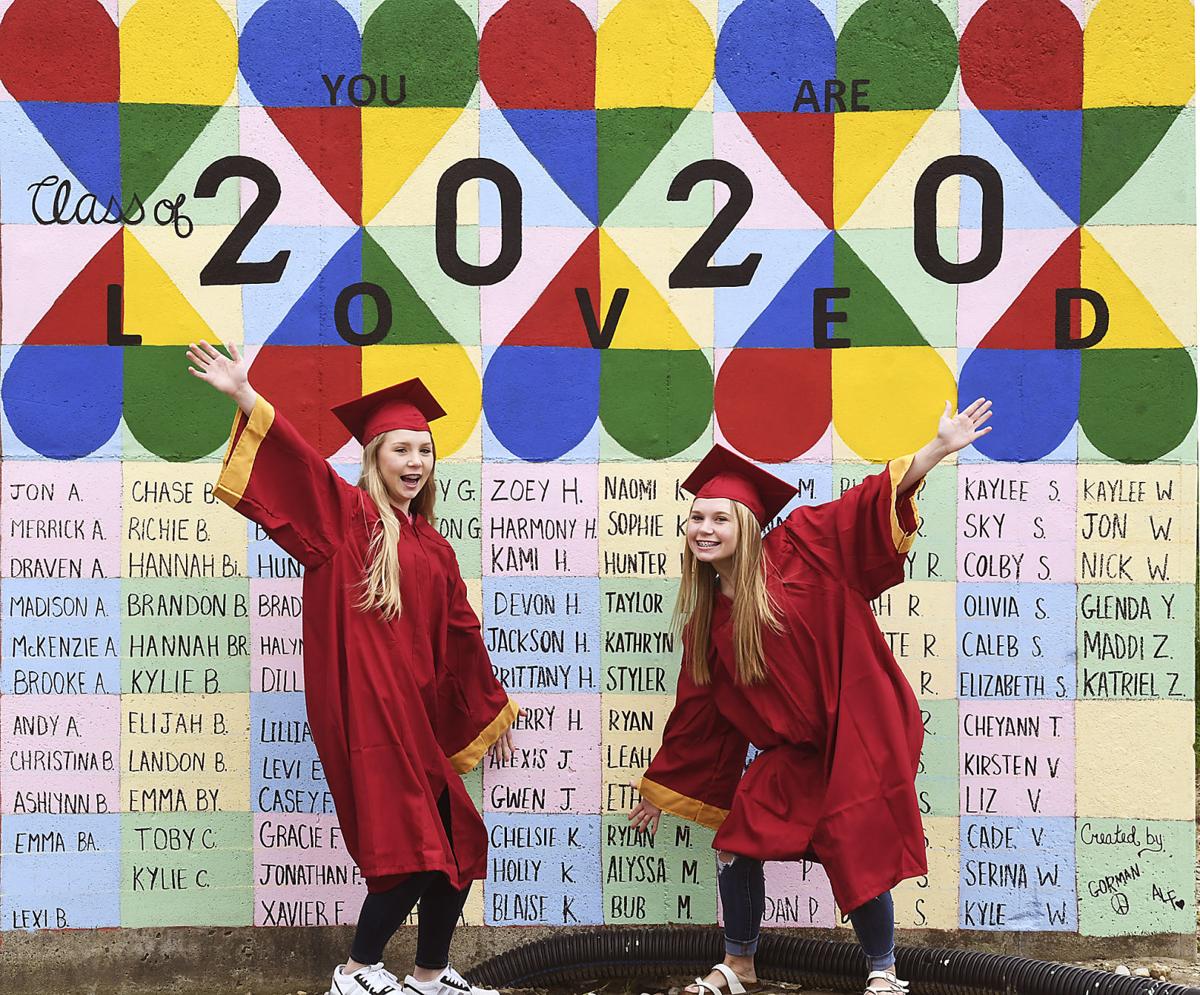 Alexandria-Monroe High School graduating twins, Chelsie and Holly Keeley, ham it up as they get their photo taken in front of specially painted mural for the class of 2020 during the school’s cap and gown distribution party May 7th. cap and gown distribution party. The event included music, socially distanced farewell with teachers and photos in front of a specially painted mural by art teachers, Angie Ficcaglia and Caryn Gorman. 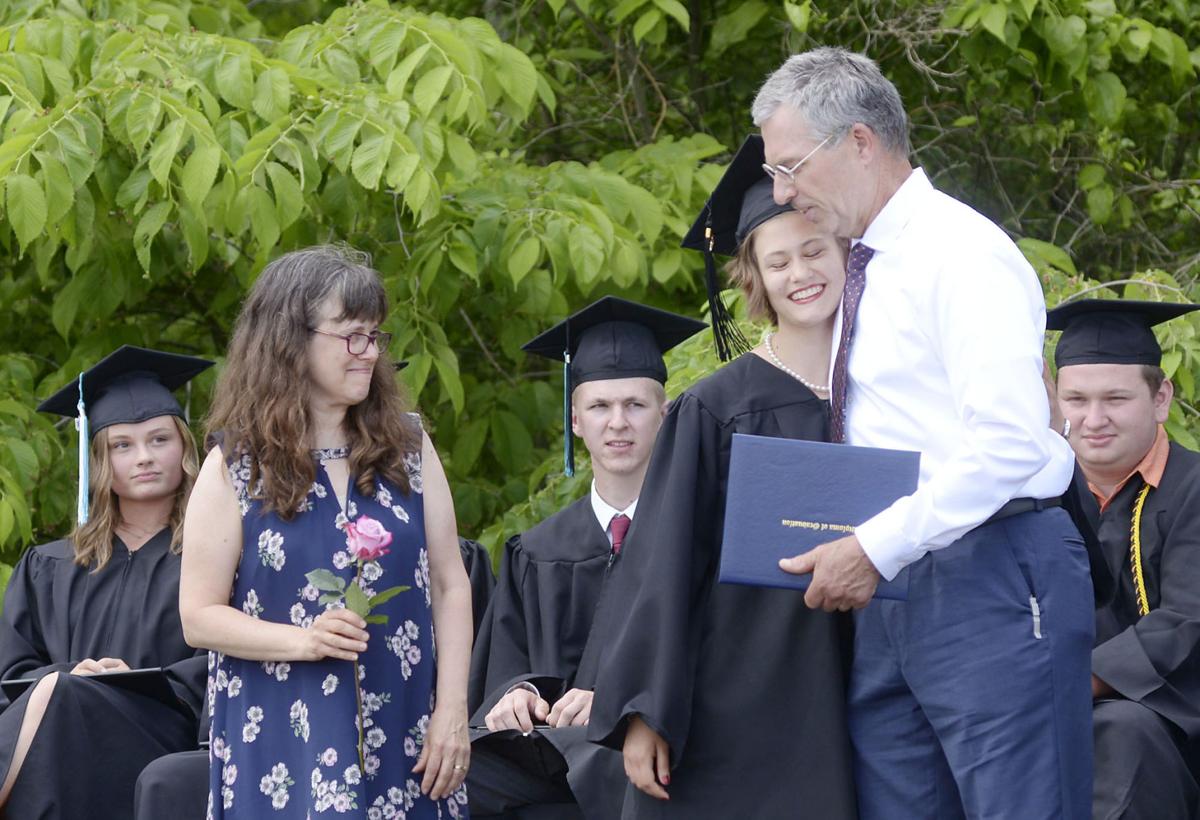 Anna Rebecca Woodhouse hugs her parents, Jeff and Linda, as they present her with her diploma during the East Central Homeschool Graduation on Saturday in the parking lot at Madison Park Church of God. 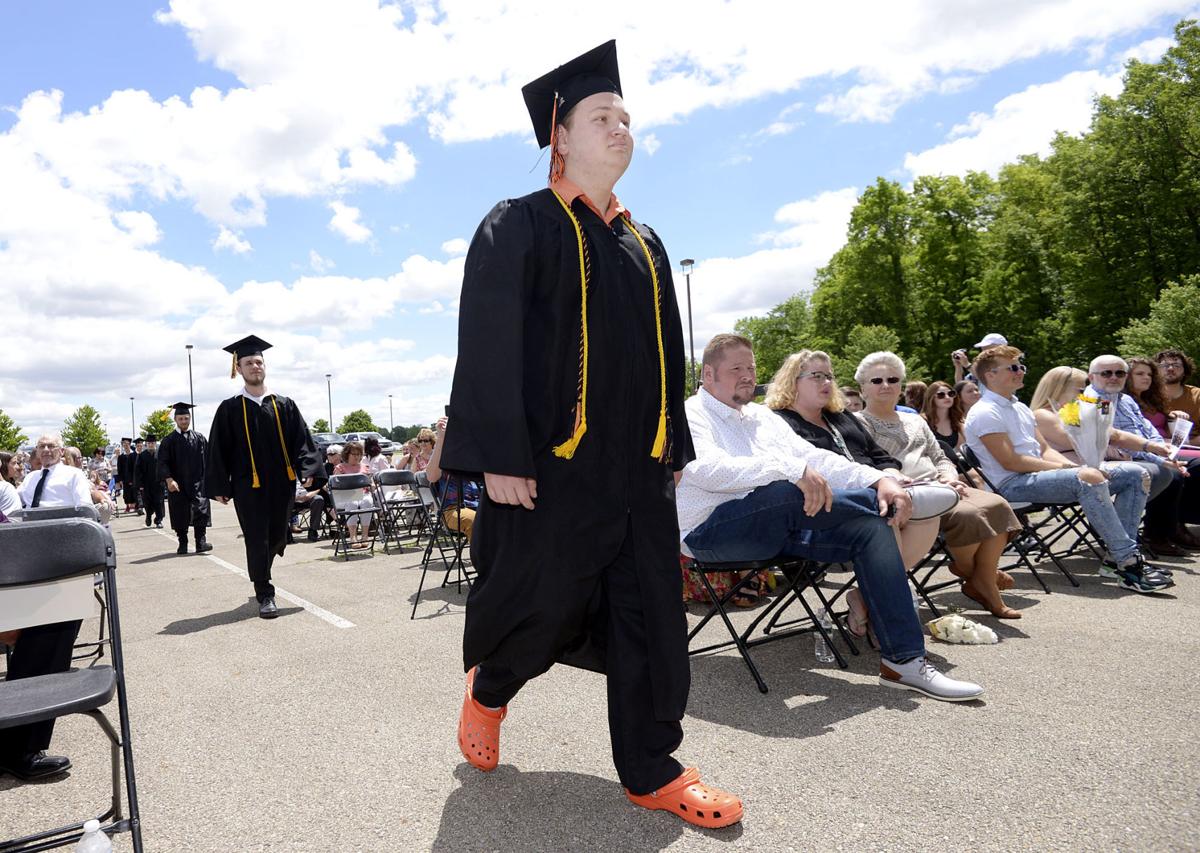 Andrew Joseph Pape walks in the processional during the East Central Homeschool Graduation on Saturday in the parking lot at Madison Park Church of God. 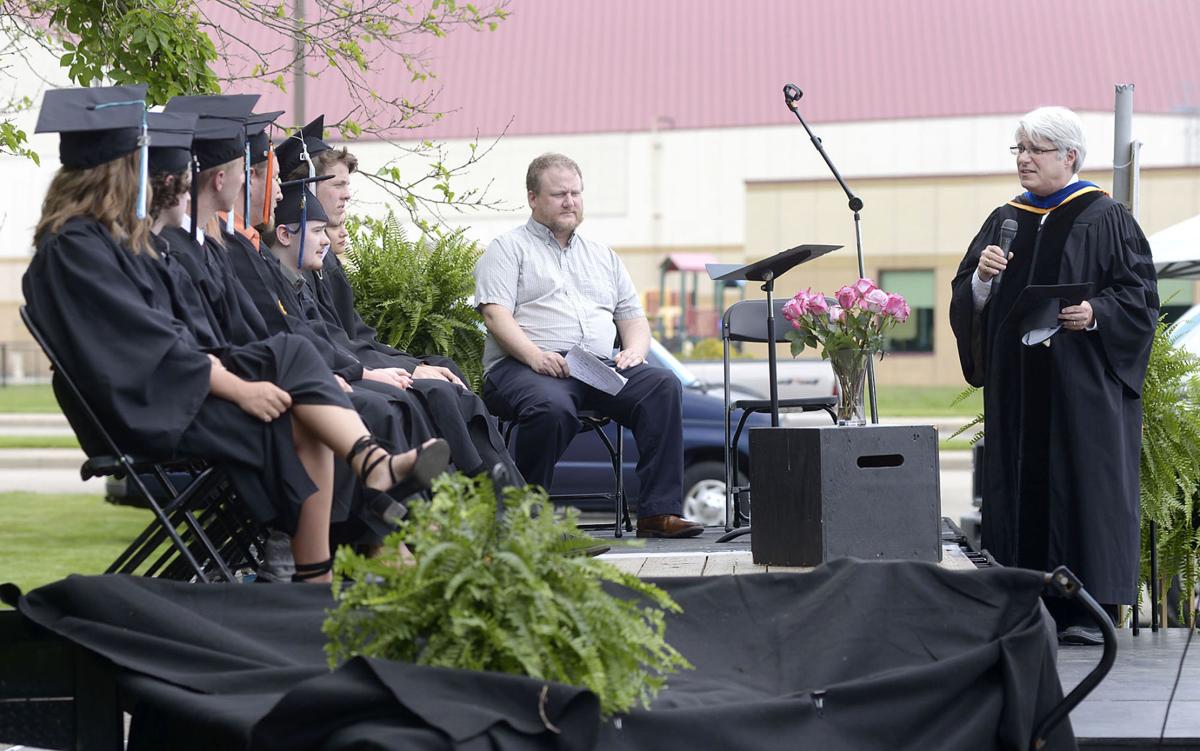 Jay While urges graduates to “walk by faith, not by sight” as he references 2 Corinthians during the East Central Homeschool Graduation on Saturday in the parking lot at Madison Park Church of God.

Alexandria-Monroe High School graduating twins, Chelsie and Holly Keeley, ham it up as they get their photo taken in front of specially painted mural for the class of 2020 during the school’s cap and gown distribution party May 7th. cap and gown distribution party. The event included music, socially distanced farewell with teachers and photos in front of a specially painted mural by art teachers, Angie Ficcaglia and Caryn Gorman.

Anna Rebecca Woodhouse hugs her parents, Jeff and Linda, as they present her with her diploma during the East Central Homeschool Graduation on Saturday in the parking lot at Madison Park Church of God.

Andrew Joseph Pape walks in the processional during the East Central Homeschool Graduation on Saturday in the parking lot at Madison Park Church of God.

Jay While urges graduates to “walk by faith, not by sight” as he references 2 Corinthians during the East Central Homeschool Graduation on Saturday in the parking lot at Madison Park Church of God.

ANDERSON — Carson Wallace’s message to his classmates was “Don’t let fear keep you from saying yes to God’s word. Go and do.”

SPECIAL SECTION: Celebrating the Class of 2020

Nearly 1,500 seniors at 12 area schools saw the final year of their primary education come to an end like no one before them — learning from h…

Wallace shared his experience overcoming his fears when his family went to Kenya for three months where his father taught chemistry.

He was one of three speakers who addressed the 11 students who received their diplomas from their parents during the East Central Indiana Homeschool Graduation held in the parking lot of Madison Park Church of God on Saturday.

Each student had a row of chairs set aside for their family as extended family and friends watched from lawn chairs or their cars.

The homeschool graduation ceremony is among the first of the 2020 high school commencement season, which this year has been extended into July for some schools because of the COVID-19 pandemic.

Others this weekend include ceremonies for Frankton, Lapel and Pendleton Heights high schools today.

Trying to bring a traditional and fitting close to the graduates’ K-12 educations has left school officials, parents and students to find creative ways to celebrate.

The Herald Bulletin is trying to help with that effort today by publishing the names and photos of nearly every graduate of a Madison County high school and ones in the nearby communities we cover in its special graduation section.

Though the graduates won’t walk across a stage with their classmates, many celebrations will include the trappings of the traditional graduation, including, cakes, balloons and decorated mortar boards.

In addition to planning a socially distanced ceremony and parade, Alexandria-Monroe Jr.-Sr. High School officials tried to bring back some of the fun of senior year for the school’s 112 seniors May 7 with a cap and gown distribution party. The event included music, socially distanced farewell with teachers and photos in front of a specially painted mural by art teachers, Angie Ficcaglia and Caryn Gorman.

Alexandria Principal Tom Johns said he came up with the idea while talking to a representative from Herff Jones, which sells memorabilia, such as class rings.

“This is a very special senior class, both academically, athletically,” he said. “It was exciting to see them. It had been two months since I’d seen all of them,”

As they discussed what could be done, he formulated a plan that would draw in his staff.

“I have a pretty creative group of teachers who work with students,” he said.

That included Michael Abernathy, the school’s announcer of the annual powder puff game to act as master of ceremonies, and math teacher Michelle Burnett as disc jockey.

“He’s known for talking smack,” Johns said of Abernathy. “All the staff members I reached out to didn’t think twice about it. They were like, ‘How can I help? What can I do?’”

Senior Meredith Nichols, 18, who looked forward for years to celebrating the end of her K-12 chapter, said the ceremony wasn’t the only thing that changed for her because of COVID-19. She originally planned to work at a church camp over the summer but instead will start online classes for her degree in music education and theater from Indiana Wesleyan University.

“I know I would really like to have an actual graduation and have my parents there and give my grandma a hug and worm through all of my friends,” she said.

Nichols said she didn’t know in advance about the party and thought she was just going to drive through to pick up her cap and gown. She said she appreciated the effort Johns and his staff put into the surprise.

“At first I didn’t really realize what all was going to go into it,” she said. “I think it was really great they gave us something to get together and see our friends and see our teachers. It wasn’t ideal, but if definitely was more fun than picking up our cap and gowns in the hallway before lunch.

“We got pictures together that we probably won’t be able to get at the actual graduation.”

“Mr. Johns has been working really hard to give us something and not settle for anything less than he is able to provide,” she said. “Compared to an online graduation, it’s definitely something I am looking forward to now.”

Heather Morris, whose son Hunter Morris graduates today from Lapel Jr.-Sr. High School, spearheaded a senior banner project similar to one she had seen organized in another town. Banners honoring each graduate have been hung along Main Street.

“Just being able to honor them and let them know the whole town was behind them for all of the challenges they overcame at the end of the year, seemed like a special sort of thing we could do,” she said. “I kind of sat on it a couple of days and thought, ‘How can this be done; how could the money be raised’?”

The first thing Morris did was contact Lapel-based WC Signs to figure out the cost.

“I thought if we were going to do this it would be cool to work with a local company on this,” she said.

After getting the go-ahead from Lapel Principal John Willis, Morris started a Go-Fund Me page to raise $1,400 for the project. The money was raised in about an hour and 20 minutes from Lapel residents, teachers and people who no longer live in the community, she said.

“I wasn’t sure how quickly that would happen. I wasn’t sure it would take days or weeks, but I knew it needed to be done before graduation,” she said.“I was floored by how quickly people started donating. I just think it was a testament of how much people want to do something to acknowledge the seniors this year.”

On whether or not the school is able to return to its traditional graduation ceremony anytime soon, Morris said she believes the banners are likely to become something the community will support from now on.

“Mr. Willis and I have already talked to about what junior parent we will pass this torch on to,” she said.

Here are the tentative plans for ceremonies and other celebrations marking the graduation of the Class of 2020. Please, keep in mind that plans can change as needed for the safety of students, families and staff.

Alexandria: The district is working with the Madison County Health Department in an effort to enable all parents and guardians to be able to view the ceremony on the football field 7 p.m. June 19. Following the ceremony, graduates will parade down Harrison Street toward downtown and be announced individually as they arrive. The event also will be livestreamed, and diplomas for those who are unable to attend are expected to be mailed by June 29.

Anderson: The high school will work with Tilt23 Studios to provide seniors and their families with a virtual commencement ceremony at 7 p.m. June 2. The commencement will be preceded by a parade of seniors from 5 to 6:30 p.m. on the driveway in front of the school so students can say farewell to their teachers and other school staff. Students must remain in their vehicles and all other social distancing guidelines must be followed.

Daleville: Ceremony will be 7 p.m. July 1 at the Daleville track and field area. Guest speaker will be Justin Melnicl, an actor on the CBS program Seal Team.

Elwood: The ceremony is expected to take place at a yet to be determined June 7 at Elwood Jr.-Sr. High School. No details on the procedures have been released.

Frankton and Lapel: Seniors and their families will be called into the auditorium starting at 2 p.m. today, with each mini-ceremony expected to take about a minute. The student will walks across the stage, receives a diploma and walks out of the auditorium and back to their cars. The total number of attendees, including the school administrators, will follow the governor’s orders regarding mass gatherings. A community parade will take place in Frankton at 5 p.m.

Indiana Christian Academy: Students will celebrate commencement at 6:30 p.m. July 18 at the Grace Baptist Church auditorium. Though social distancing will be practiced, plans allow for all families to be present.

Liberty Christian: Terry Truitt, President and CEO of the Flagship Enterprise Center/Bankable is expected to be guest speaker for the graduation ceremony scheduled for 6 p.m. Tuesday, June 16 at Faith Church, 2817 E. 53rd Street, Anderson. In an effort to remain within the state’s reopening plan guidelines, which are expected at that time to allow gatherings of no more than 250 people, seniors are asked to bring only their immediate family members. A smaller informal ceremony will take place 6 p.m. May 30 for students who plan to leave for military service. The ceremonies will be streamed through the school’s YouTube channel.

Madison-Grant: An abbreviated version of the traditional ceremony will take place 7 p.m. June 5 at the football stadium, with gates opening 30 minutes prior. Rain date would be 10 a.m. June 6. Each family will be limited to four ticket, which should have been received on Friday. Attendees are encouraged to wear masks.

Pendleton Heights: Pendleton Heights High School will air a virtual graduation 2 p.m. today, 2020 on YouTube, with hopes of being able to do a traditional commencement ceremony at a later date. The YouTube link will be available on the school’s website.

Shenandoah: The graduation ceremony has been tentatively rescheduled to 6 p.m. Friday, July 10, 2020. The venue, social distancing plans and other mandates will be made public at a later time. If this turns out not to be possible, diplomas will be distributed in another manner.