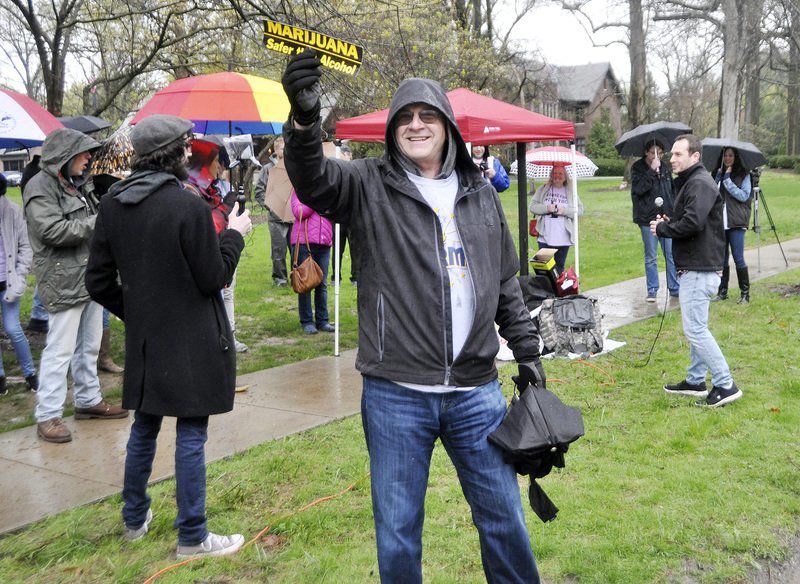 Bill Groth holds a bumper sticker in support of marijuana law reform during a rally in 2019 outside Gov. Eric Holcomb’s residence in Indianapolis. 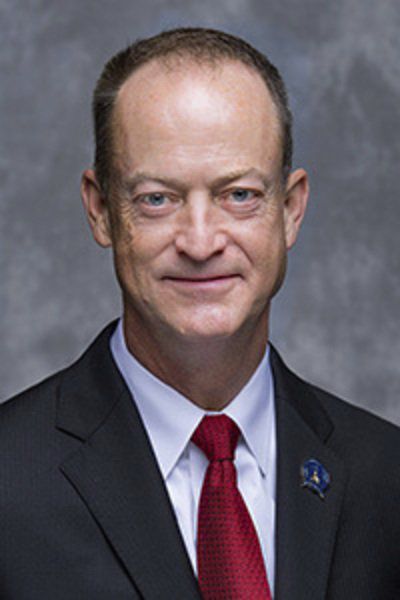 Indiana remains a holdout even as neighboring states pursue cannabis reform prompting Schmuhl to push for full legalization in the upcoming 2022 session.

“I think that you look at all the states around us, and they’re making progress on this issue in one form or another,” Schmuhl said. “Kentucky right now is debating medicinal use in their state, and so if all of that came together, Indiana would really be an island unto itself.”

Two of Indiana’s neighbors, Illinois and Michigan, have legalized marijuana for recreational use for adults along with 16 other states. A southern Michigan dispensary recently told a reporter at FOX59 that about 60% of its customers came from Indiana, prompting Sen. Greg Taylor to call for marijuana reform at home.

“I know that we have to take baby steps,” Taylor, D-Indianapolis, told business leaders at the Indiana Chamber’s Legislative Preview a week ago. “It would give taxpayers money … and I would rather be proactive than reactive.”

Taylor, along with other Senate Democrats, named marijuana reform as one of their priorities for the 2022 session.

But Republican leader Sen. Mark Messmer, of Jasper, said progress on the issue seemed unlikely as long as the federal government continues to classify marijuana as a Schedule 1 drug, which bars federally backed banks from taking deposits from marijuana distributors.

“It’s an issue that does poll well with the public but there’s still conflicting federal statutes that make it a little difficult to bring forward,” Messmer said. “I know other states have tried ways to work around it but … I don’t know if we’re ready to make that commitment.”

In 2017, Indiana passed a law that allows for low levels of CBD oil and THC to treatment certain medical conditions, such as epilepsy. In the 2021 session, legislators passed a law that lets Hoosier drivers who legally consume the drug across a state border not to be prosecuted if they’ve involved in a crash that’s ruled to not be their fault.

But despite support from Republicans such as former Sen. Jim Merritt and Rep. Jim Lucas, no other marijuana bill received a hearing in 2021.

Daniel Orenstein, an assistant professor of law at Indiana University, said that Indiana lagged behind other states because of Indiana’s conservative identity but also because Indiana didn’t have a ballot initiative process.

“A lot of states that have changed their cannabis laws … have done so through ballot initiatives,” Orenstein said. “(Ballot initiatives) sort of let state legislators off the hook for having to come out in support or opposition to legalizations and allow voters to do it themselves.”

Democrats, in a released brief, identified three areas where they see benefits to legalizing cannabis: economy, health and criminal justice.

Some studies have shown that marijuana use can help those living with chronic pain or post-traumatic stress disorder. Others have found that using cannabis diminished opioid usage.

In Indiana, the ACLU found that Black Hoosiers were 3.5 times more likely to be arrested for marijuana possession than white people, despite similar use rates.

Many states considering legalization have had to confront this disparity and made their legislation retroactive, expunging records for marijuana possession.

“This (disparity in enforcement) is one of the worst aspects, I think, of the history of cannabis,” Orenstein said. “It’s been incredibly inequitable enforcement and that’s a big part of why a lot of people are focused on changing that and changing the laws to make amends.”

Because of its popularity with Hoosiers, Schmuhl said the party wanted to be on the forefront of the issue, pushing for cannabis reform. However, with Republicans holding a supermajority in both chambers, Schmuhl admitted chances are slim.

“We’re going directly to the people. There’s no question that we’re in the superminority in the General Assembly but we want to go directly to Hoosiers to talk about issues that are impacting their daily lives,” Schmuhl said. “I do think that right now this is the kind of thing where states are taking the lead and then, over time, the federal government will probably act.”

Orenstein hesitated to make predictions but said that with popular, bipartisan support, movement was likely on the federal level and lawmakers could take the time to consider how it should look in the Hoosier State.

“I think this nationally is kind of past the point of no return and now we’re headed toward some kind of legalization and it’s time to start thinking about the best way to do it,” Orenstein said. “I’d like to see (some) attention about how to do this in a way that is intelligent, protects public health and protects people while fixing our past mistakes.”