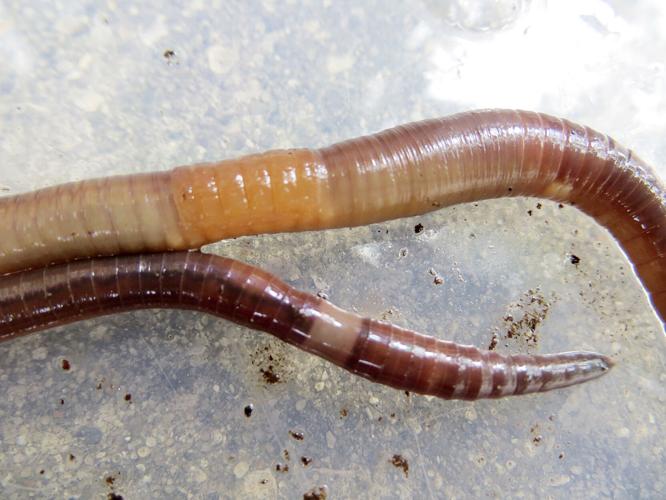 This photo shows an invasive Asian jumping worm, bottom, next to a common nightcrawler.

An example of an Asian jumping worm photographed by the Purdue Plant and Pest Diagnostic Lab. The worms live for only one season, dying in the first hard freeze, but the cocoons they leave behind hatch the following spring and can be easily spread to new areas. 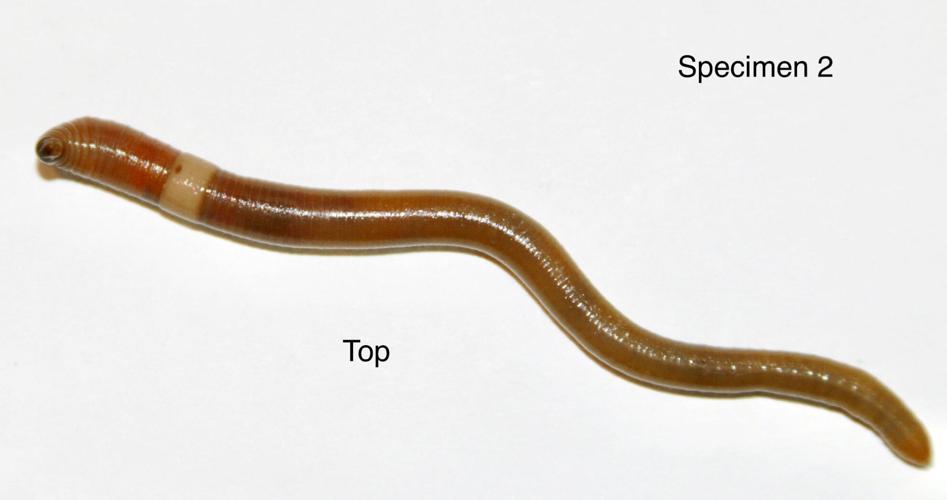 Asian jumping worms can be identified by the white clitellum that circles their whole body and by the way they thrash around when disturbed.

This photo shows an invasive Asian jumping worm, bottom, next to a common nightcrawler.

An example of an Asian jumping worm photographed by the Purdue Plant and Pest Diagnostic Lab. The worms live for only one season, dying in the first hard freeze, but the cocoons they leave behind hatch the following spring and can be easily spread to new areas.

Asian jumping worms can be identified by the white clitellum that circles their whole body and by the way they thrash around when disturbed.

Unlike the Addams family, these worms are more than a fictional horror.

There are several species of Asian jumping worms, and the invasive earthworm has showed up in Indiana. Purdue’s Plant and Pest Diagnostic Lab has received samples from Bartholomew, Vanderburgh and Gibson Counties, said lab director Tom Creswell.

“Obviously, this problem is very likely to be much more widespread than currently known,” Creswell said. “As people become more aware they will begin to report it more often.”

Asian jumping worms have been in North America for a while, having first been recognized as a problem about a decade ago when they were discovered in the Great Smokey Mountains National Park, said Sam Chan, an invasive species specialist with Oregon Sea Grant at Oregon State University.

“Probably brought here from Asia at least seven decades ago, but we actually don’t know when it happened,” said Chan.

Park resources managers noticed trees not regenerating their forest, areas with very little leaf litter and unusual soil, which turned out to be the castings of the worm.

“The Asian jumping worms will really rapidly eat all of the leaf litter and organic matter near the surface of the soil, and that makes it really hard for plants to take root, to get the nutrients that they really need to grow and thrive,” said Elizabeth Barnes, an exotic forest pest educator at Purdue University.

“It can also disturb the soil structures in ways that makes it hard for plants, especially in forests, to grow, and it makes runoff more likely,” she said.

In Oregon, there has been an increase in reports this year, something Chan attributes to increased public education and people spending more time outside gardening or in natural areas due to the pandemic.

The rise of the internet as a marketplace allowing people to purchase just about anything from anywhere has helped the worms spread as fishing bait and composting worms, Chan said.

They’re commonly sold under the name “Alabama Jumpers” or might be referred to as “Crazy Snake Worms.”

Most worms found in Indiana are nonnative species from Europe. During the ice age, glaciers covered most of the state, displacing native worms.

“When European settlers came over, they brought potted plants and trees and maybe some soil in ballast and things like that,” explained Eileen Kladivko, a Purdue agronomy professor who has studied the positive benefits of European earthworms in no-till farming.

While the European worms can be beneficial to gardeners and farmers, breaking down organic matter and aerating the soil, these natives of Japan and Korea stay near the surface, break down organic matter faster than plants can absorb it, and their castings repel water and leave the soil the texture of coffee grounds.

They’re an annual worm, dying off after the first hard freeze. They’re asexual, so they don’t need a mate to reproduce. And the cocoons they leave behind can survive harsh winters and dry weather.

The cocoons are easy to move, sticking to the bottom of shoes or garden tools and equipment.

Identifying the worms is a first step in controlling them. An article in Purdue’s Landscape Report authored by Barnes gives tips for doing just that.

Their clitellum, the band made up of reproductive segments, is milky white and circles their entire body, unlike nightcrawlers, whose clitellum is more reddish and doesn’t completely circle their body.

They are iridescent and gray brown, unlike nightcrawlers, which are more reddish brown.

But their defining characteristic is their behavior.

“The earthworms that people are used to will wiggle around and try and escape if you pick them up, but these will actually thrash,” Barnes said.

“That’s how they get their name — they’ll thrash wildly.”

The cocoons are small and hard to identify, but one can avoid transporting them by cleaning garden tools and equipment. They can even be moved on the soles of shoes.

If worms are found in the landscape, solarizing the area can help control them.

“Temperatures much over about, say, 105 degrees or so, these worms actually die if exposed to that temperature in about 30 minutes,” Chan said.

Solarization, covering the soil with clear plastic in the heat of summer, will also destroy the cocoons.

“Once you do that, then you can till the soil again and then resolarize it,” Chan said. “Basically you’re working the depths. And that may not completely eradicate all the worms, but it will sure reduce their populations and allow you to landscape.”

Officials warn when buying worms be careful of what you're buying and dispose of them properly to avoid spreading invasive species like the Asian jumping worm.

"If you're someone who fishes or wants to do vermiculture for composting, try to make sure you've got the right worms," said Elizabeth Barnes, exotic forest pest educator at Purdue.

When you finished with the worms, whatever the species might be, be sure to dispose of them properly.

"Make sure your not dumping them on the ground when your done," said Barnes.

"If you have any extras you can either seal them up in a container and throw them right in the trash or seal them up stick them in your freezer leave them for a week that should kill them and then throw them away."