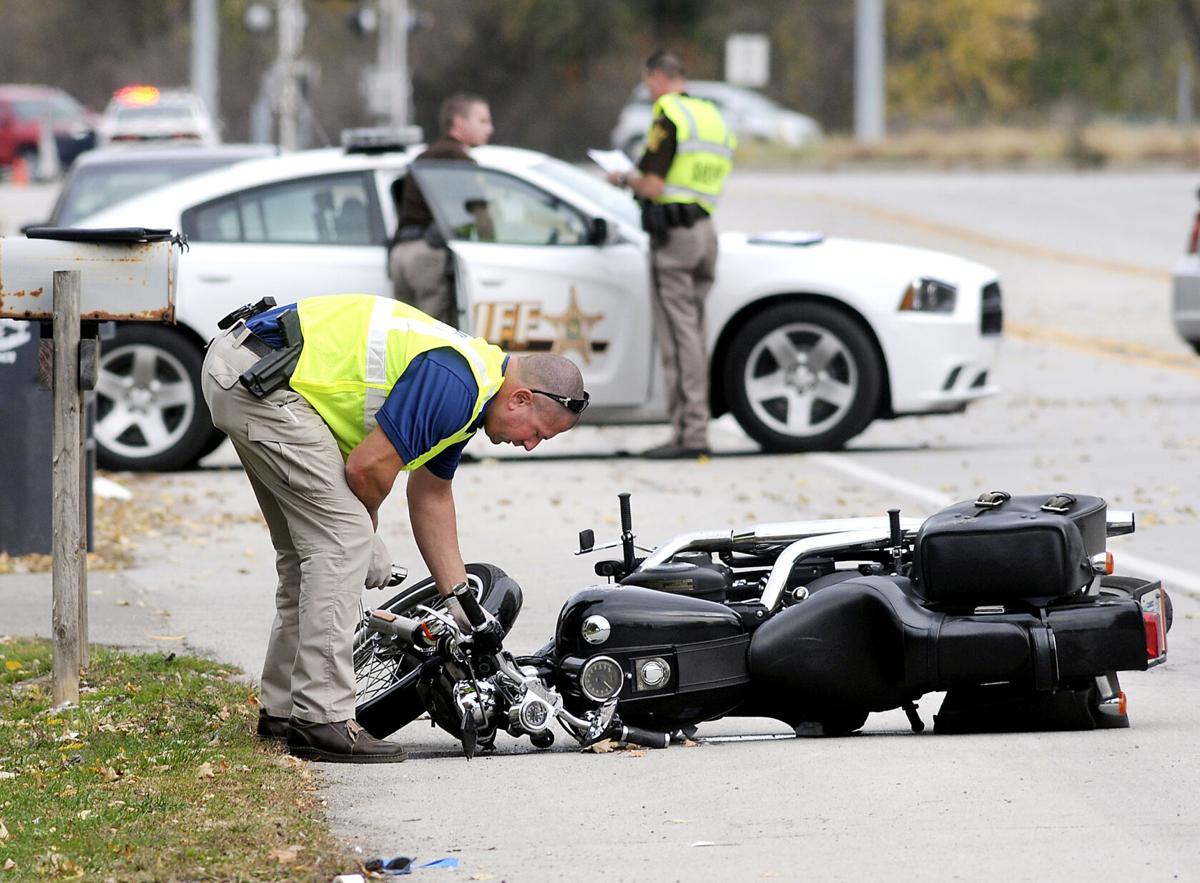 Madison County sheriff’s deputies investigate a personal injury accident involving a car and a motorcycle on Ind. 32 in Chesterfield. Two people were sent to the hospital. 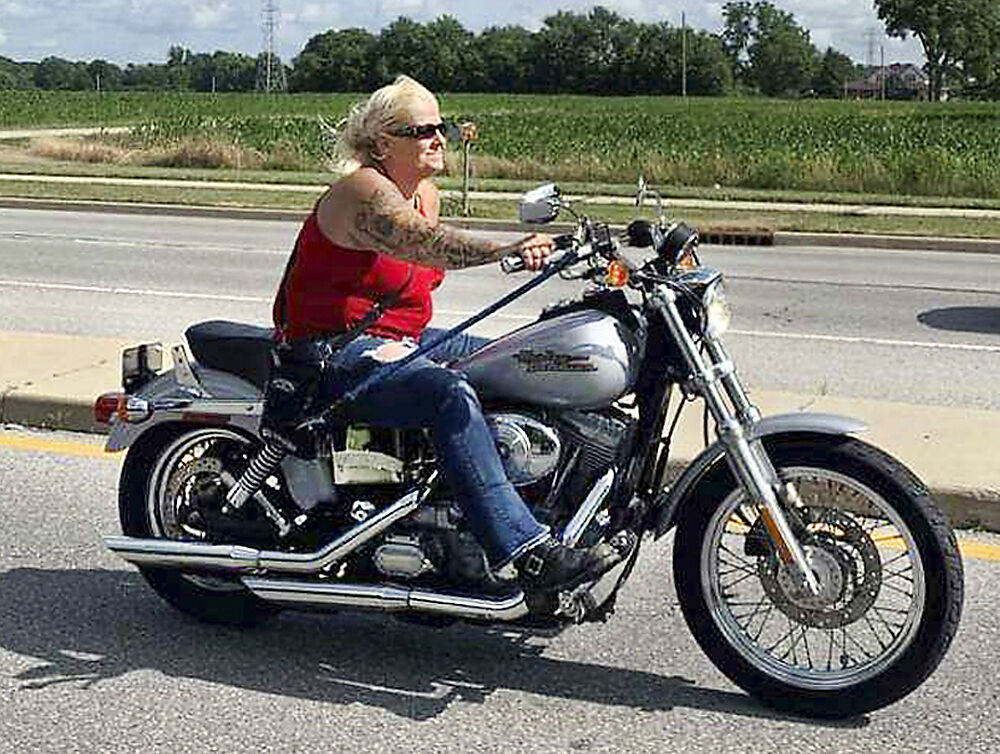 Madison County sheriff’s deputies investigate a personal injury accident involving a car and a motorcycle on Ind. 32 in Chesterfield. Two people were sent to the hospital.

ANDERSON — Nearly a month after her father was struck by an SUV while riding a motorcycle, his daughter says he is still receiving care for his injuries.

Tasha Gilbert, of Anderson, said her father was released from the hospital into a rehabilitation facility last week.

“He still has bleeding in his brain, but they did end up taking the ventilator out.”

Swain, 49, is charged with a Level 5 felony causing serious bodily injury when operating a vehicle while intoxicated.

A portable Breathalyzer test showed Swain’s blood alcohol content was 0.205% — more than twice the legal limit — shortly after the accident. She was uninjured.

“It feels like the number of motorcycle accidents is rising,” Gilbert said. “It’s insane.”

In addition to the accident involving Jones that occurred in the 1100 block of Broadway, there were at least two other serious motorcycle accidents in the area last month.

Devyn Underwood, 27, suffered head injuries when the motorcycle he was riding left the road south of Summitville on June 12.

Kerry and Barbara Hinkle, both 62, of Anderson, were seriously injured June 14 when the motorcycle they were riding was struck by another vehicle near the intersection of 38th Street and Ridge Road.

In Indiana, 138 motorcyclists were killed in 2020, up from 113 the year before, according to a news release from the Indiana Criminal Justice Institute and Bureau of Motor Vehicles. “(Motorcyclists) are involved in less than 2% of crashes but make up over 15% of all traffic deaths,” said Devon McDonald, the institute’s executive director.

Nationally, 5,014 motorcyclists were killed in 2019 traffic accidents, according to the U.S. Department of Transportation’s National Highway Traffic Safety Administration. Of those, 4,733 were riders and 281 were passengers. Motorcyclists accounted for 14% of all traffic fatalities.

Madison County tends to see an upsurge in motorcycle accidents during the summer, according to Sheriff Scott Mellinger, but alcohol or drug use have caused more of those accidents this year.

Mellinger said the potential for injuries also increases when motorcyclists don’t wear helmets, and it doesn’t help that drivers today appear to be less aware of their surroundings.

He said drivers need to slow down, not drive under the influence and pay attention to their surroundings. Riders can be overlooked when a driver is impatient and “(takes) for granted that a quick look will suffice” when checking for other traffic.

“Motorcycles are a great recreation, and when driven with safety in mind, the rest of us need to also do the same.”

Even though it’s not the law, Anderson Police Public Information Officer Caleb McKnight said he always recommends people wear a helmet when riding. One of the things he has also noticed is that quite a few riders only have permits. It’s critical for them to obtain a motorcycle endorsement and pass a designated driving course to get their license.

“Always scan ahead while riding and anticipate that the other driver does not see you.”

Gilbert said one of the reasons she feels vehicles are safer than motorcycles is because there is very little between the person on the motorcycle and the surroundings. Yet, she thinks one of the biggest hazards for motorcyclists is other motorists.

“People do not watch out for motorcyclists at all.”

Kelli Lane, who has helped organize motorcycle charity rides for nonprofits like Turn Away No Longer, said she has ridden a motorcycle for more than 40 years.

Lane said she loves riding her 2001 Dyna Super Glide Harley-Davidson because it gives her a feeling of freedom.

“I can have the worst day in my entire lifetime, you know it — just be having a really crappy day — and you get on your motorcycle, and the freedom of it is just unbelievable,” she said. “They say you will never see a motorcycle parked outside of a psychiatrist’s office.”

Lane said she rides her bike all year long, as long as the roads are dry and clear.

There are a number safety tips that motorcyclists can follow to help reduce accidents, she said. Riders should never drive impaired, never use a cellphone, not drive on wet or slick roads, dress for the slide by wearing boots and jeans and do maintenance checks before a ride.

Driver inattention has claimed a number of motorcyclists, she said. There have been incidents where someone on a motorcycle was sitting at a stop sign and was hit and killed by a vehicle.

Lane would like to see cell phone use banned for everyone on the road. She said even using a phone for navigation takes “your brain off what you are doing.”

And Lane said it doesn’t take much to cause a motorcycle accident.

“You can tap a motorcycle, and it will go down.”

Gilbert said her father was like Lane when it came to enjoying his motorcycle. She said he rode his bike almost every day.

“Honestly, I hope he won’t get another one, but I know he will,” she said. “I just don’t want something like this to happen again to anybody. No one deserves this.”