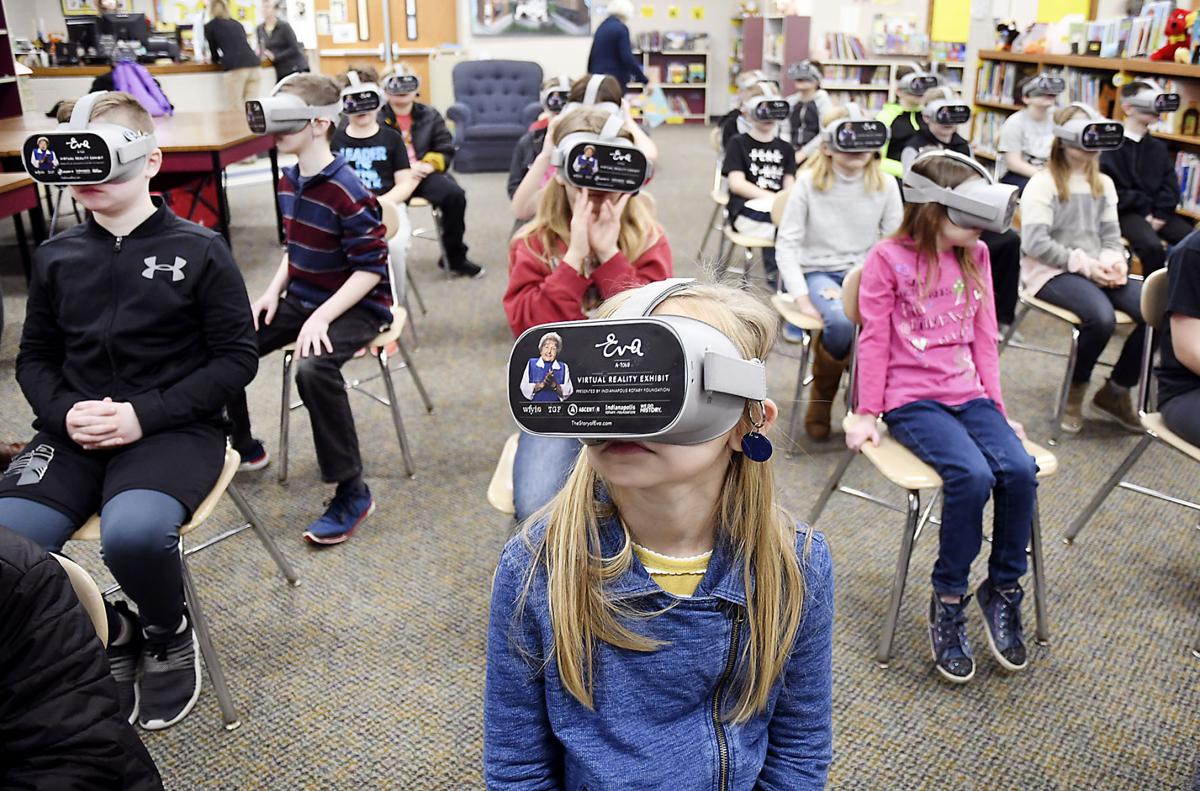 Lapel Elementary School fourth graders in Holly McClintick's class look around as they wear virtual reality viewers showing the Eva Kor experience during an Eva Education Program this week at the school. 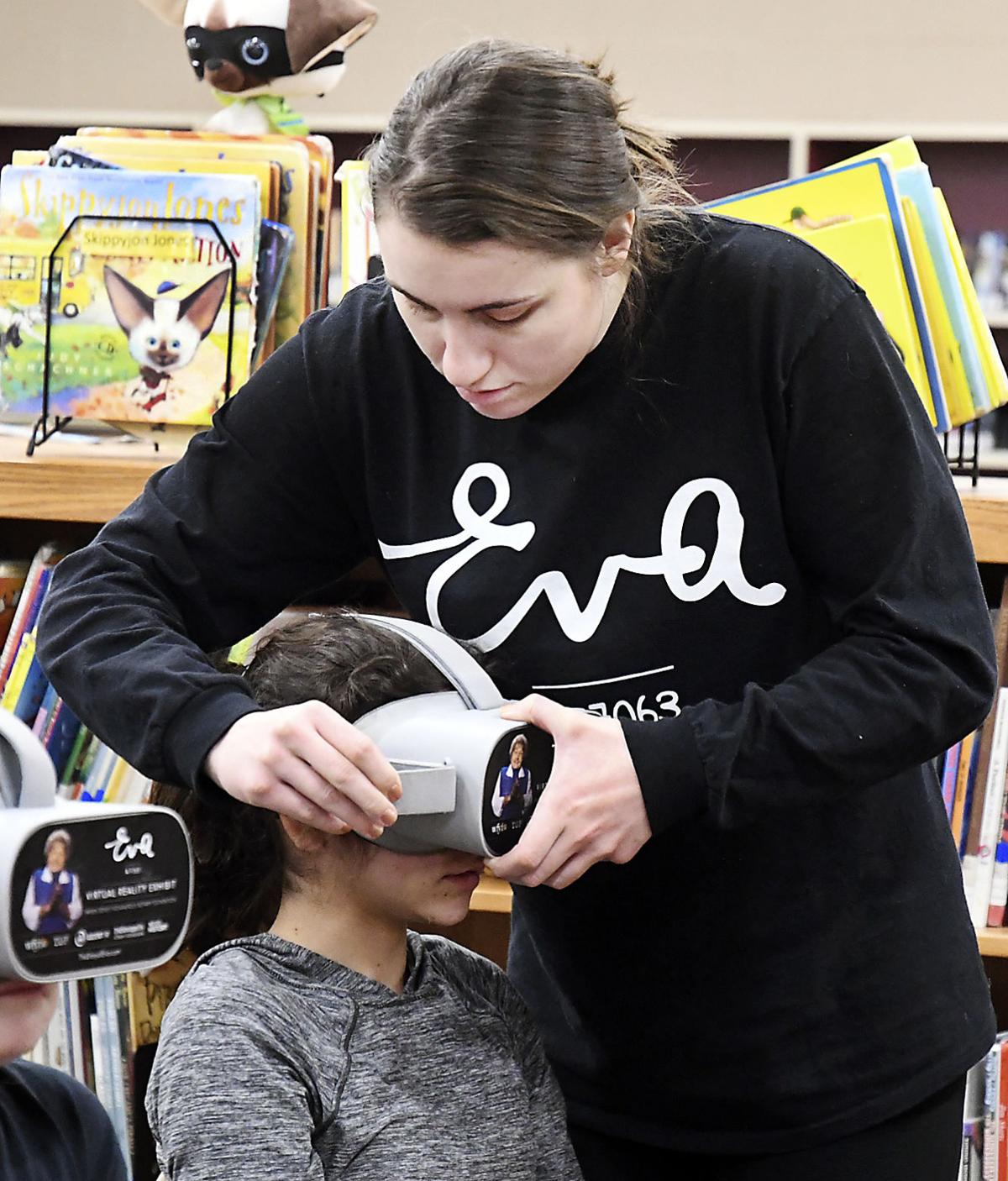 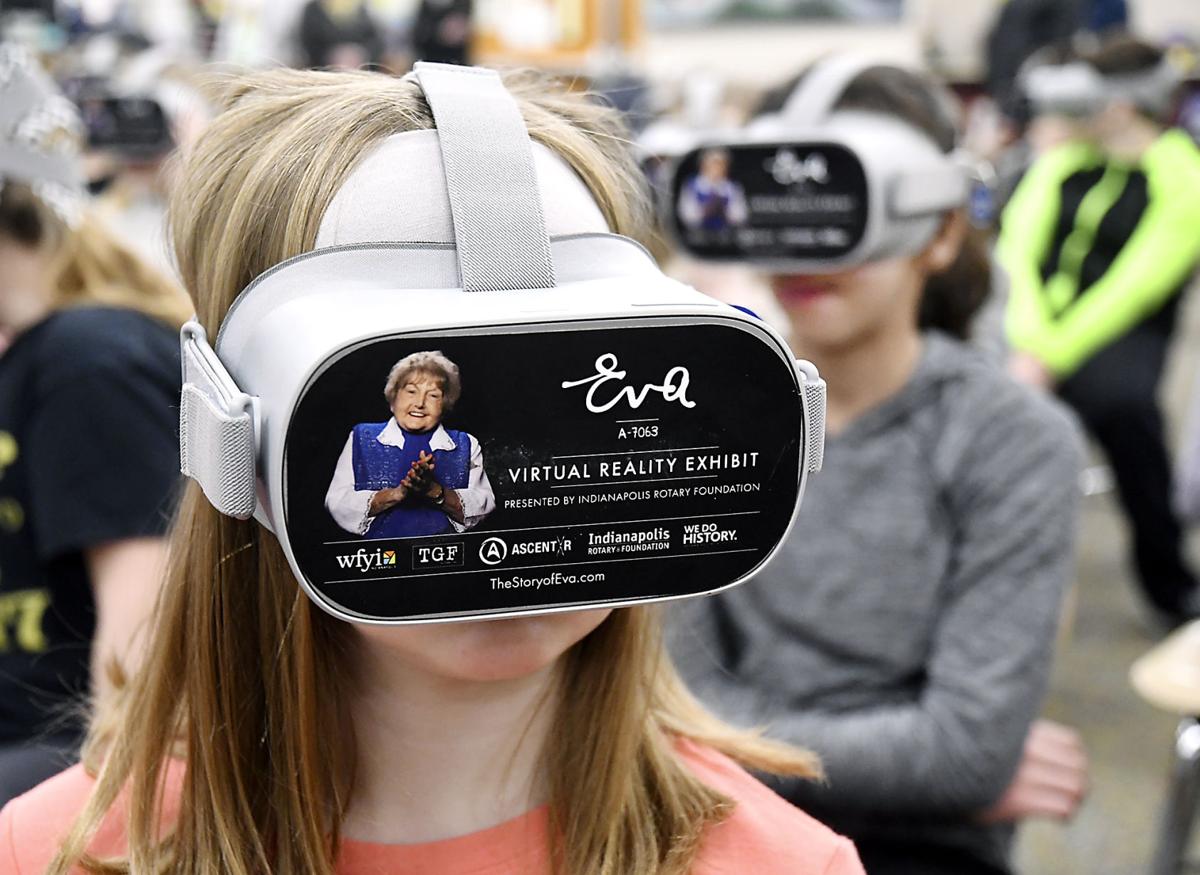 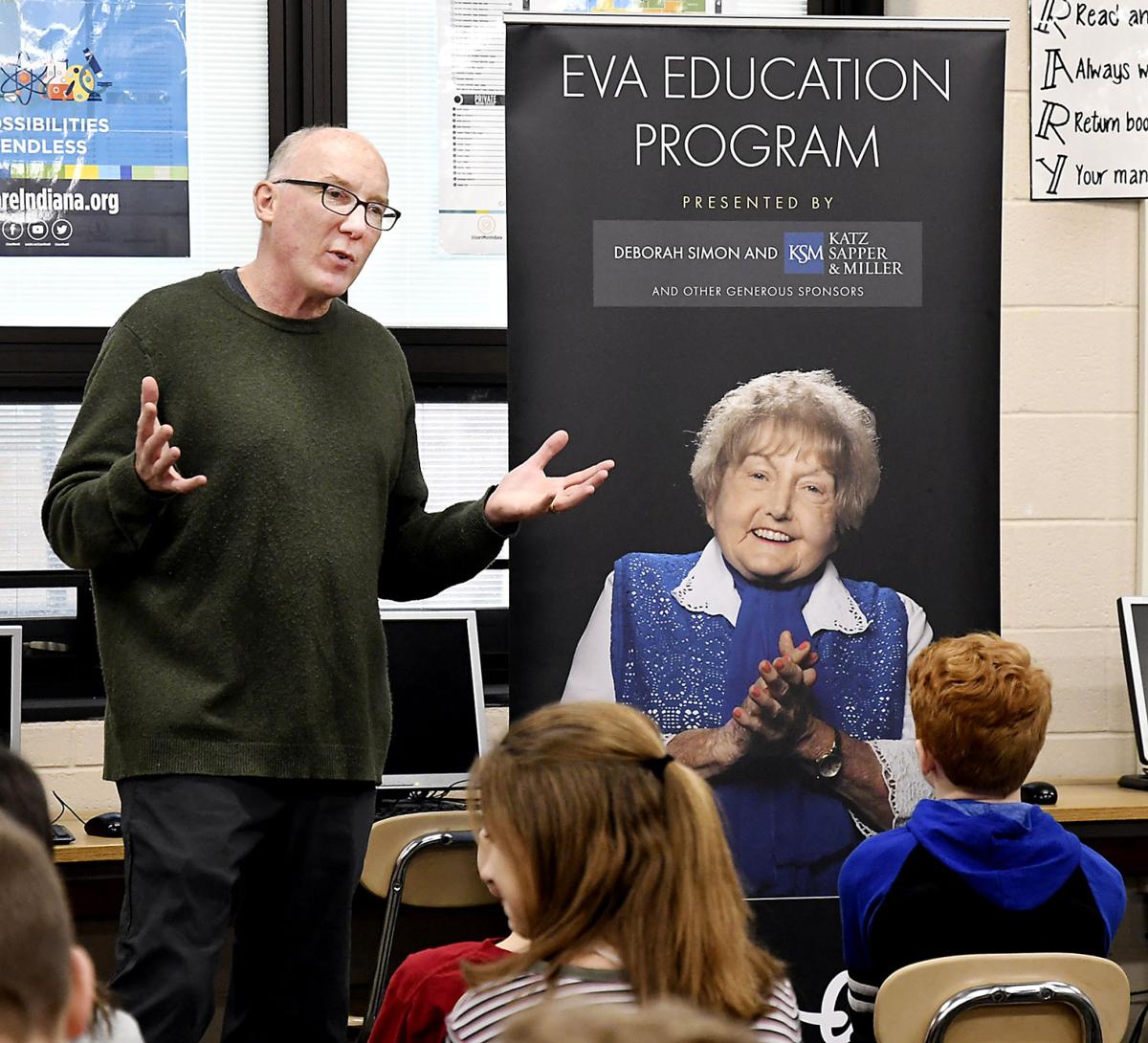 Ted Green, of Ted Green Productions, tells these Lapel Middle School students what they are about to see in the Eva Kor virtual reality tour. Green is the filmmaker who made the documentary on Eva Mozes Kor’s life as a survivor of the Holocaust.

Lapel Elementary School fourth graders in Holly McClintick's class look around as they wear virtual reality viewers showing the Eva Kor experience during an Eva Education Program this week at the school.

Ted Green, of Ted Green Productions, tells these Lapel Middle School students what they are about to see in the Eva Kor virtual reality tour. Green is the filmmaker who made the documentary on Eva Mozes Kor’s life as a survivor of the Holocaust.

LAPEL — Lapel Middle School seventh graders Keylee O’Keefe, 13, and Bo Pitcock, 13, pulled the virtual reality viewers over their heads and balanced them on their noses, similar to the way people wear eyeglasses.

Moments later, they were transported from their small-town Indiana school to the infamous World War II Auschwitz concentration camp in Poland.

“This is as sad and scary and as creepy as it gets. If it gets too scary for you, you can take the headsets off,” said filmmaker Ted Green as he helped prepare students. “Don’t be so amazed by the technology that you lose sight of what this is about, a 10-year-old girl.”

As they looked around the train platform where thousands of Jews were delivered in cattle cars and sorted and at the barracks where 300 children lucky enough to be kept alive lived, they listened to the personal story of Eva Mozes Kor, who was a 59-year resident of Terre Haute before she died last year.

“It really put everything in perspective,” Keylee said. “I always thought the barracks were a lot smaller.”

Though all the eighth graders typically are taught a unit on Anne Frank, officials at Lapel’s elementary and middle schools devoted this week to having all students from grades 4 to 7 participate in the half-hour Eva Kor education experience, featuring the virtual reality film produced through a partnership between Indianapolis-based WFYI Public Media and Ted Green Films. The students’ parents, each of whom had to agree to allow their children to participate, and other Lapel residents were invited to go through the experience the day before to calm any concerns they might have.

Kor and her sister, Miriam, are believed to be among an estimated 3,000 twins upon whom the notorious Dr. Josef Mengele experimented.

The virtual reality tour explores the arrival and sorting of the people, their lives in the barracks, the experimentation by Mengele in an attempt to create a master race and Kor’s choice to forgive.

Students were prepared for the virtual reality tour the day before by watching a documentary about Kor produced in the spring of 2018 and broadcast in nearly every PBS market. Each participating classroom also is given Kor’s book, “Surviving the Angel of Death,” to share.

Librarian Heather Rusche said she believed bringing the program to the Lapel schools was important in the ongoing effort to never forget the dark history of the Holocaust and to encourage empathy and forgiveness among students.

“The kids can really take that and use that in their lives,” she said. “If we can get a little history and some love and forgiveness in there, it’s a win-win,” she said.

Though Kor typically took people on tours of the concentration camp twice a year, most of the children in Lapel’s schools never will have such an opportunity, Rusche said. But the virtual reality tour put the students in the scene, giving them a 360-degree view of the surroundings.

Holocaust education is something the state is pushing as part of its standards, Ruache said.

“That was something that was in the back of my mind,” she said.

According to a Pew Research study published in January, fewer than half of Americans know an estimated 6 million Jews were killed in the Holocaust, and even fewer have an understanding that Adolf Hitler came to power through a democratic process.

Rusche said she didn’t have a single parent who objected to the virtual reality tour after going through it themselves.

“The actual virtual reality isn’t scary. It wasn’t gross or graphic. It was as if you took a tour of Auschwitz right now,” she said.

Jessica Chapman, Eva Project distribution and impact manager for WFYI, said the station has committed to take the program into schools one day a week. The program is fully booked through the end of the school year.

“Students relate so well to Eva’s messages, especially the messages of hope and respect and forgiveness,” she said.

Chapman said teachers also are reporting the delivery of the lesson also appears to be effective because the program is engaging and celebrates a Hoosier.

“Retention increases because of the experience and impacted more than just books,” she said. “They relate to her messages, and it changes some students’ lives.”

Ball State University is preparing to study levels of empathy among the students who go through the program, Chapman said.

Materials also are going to be donated for an exhibit at the Indiana Historical Society, she said.

The program is much more than the passive watching of a film, Chapman said. The students are called to action.

A native of Romania born in 1934, Eva Mozes Kor and her twin sister, Miriam, were the only members of their immediate family to survive selection on the train platform at Auschwitz-Birkenau. Their parents and two older sisters died in the concentration camp.

Though the twins survived, they were among an estimated 3,000 twins used for experimentation by the notorious Dr. Josef Mengele in his efforts to create a master race.

After serving in the Israeli army in the 1950s, Kor married Holocaust survivor Michael Kor and moved to Terre Haute.

Kor went on to found Children of Auschwitz Nazi Deadly Lab Experiments Survivors in 1984 at which time the organization located 122 survivors.

That same year, she founded the CANDLES Holocaust Museum and Education Center to educate the public about eugenics, the Holocaust and the power of forgiveness, a position for which she frequently was criticized.

Kor died last year in Poland where she was leading tours.