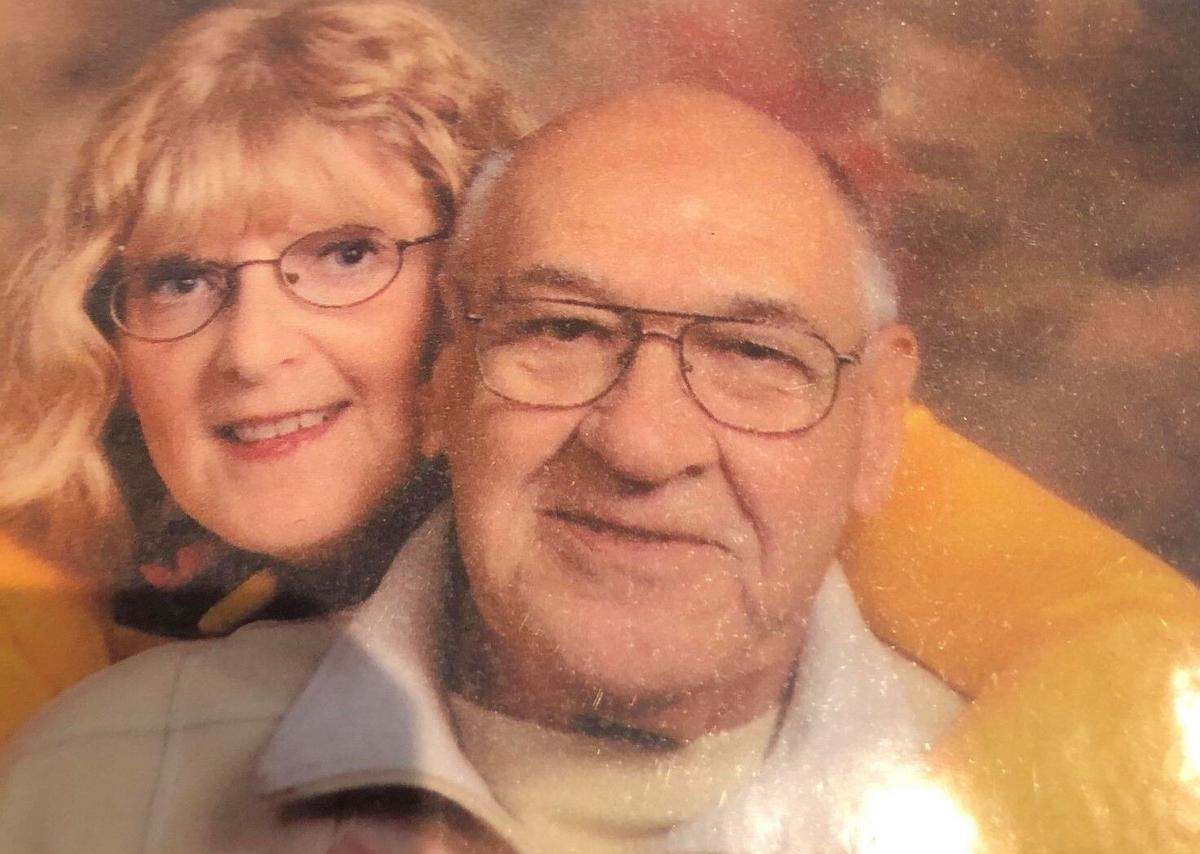 Phyllis and Bill Scantland of South Bend. Phyllis took over care of Bill after he was diagnosed with Lewy body dementia. The Scantlands tried various hospice agencies and nursing homes in search of the best care. Bill died one month after Phyllis brought him home. 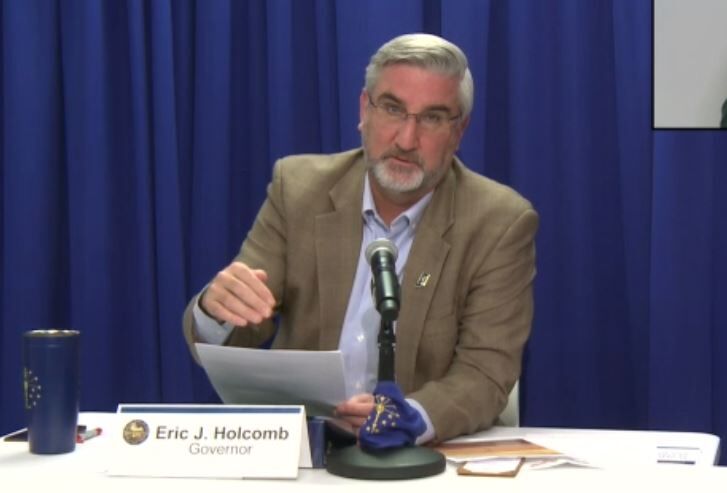 Gov. Eric Holcomb describes Indiana as “on fire” in terms of COVID-19 cases per capita during a virtual press conference Wednesday in Indianapolis.

INDIANAPOLIS – It started when family noticed that Bill Scantland shuffled his feet while he walked about five years ago. Then his hands started to tremble.

Both are signs of Lewy body dementia, a progressive form of dementia that affects thinking, memory and motor control.

By 2018, Bill’s condition worsened to the point that caring for him was a 24/7 job, and his wife, Phyllis Scantland, needed help.

“I had no clue what I needed to do (and) no guide,” said Phyllis Scantland, who lives in South Bend. “I’m still bewildered by everything I had to do.”

Struggling to find the best care possible for Bill, she cycled through numerous hospice agencies and, eventually, nursing homes, but none were equipped to give him the around-the-clock care he needed.

Bill died one month after his wife, unable to find a suitable nursing home, brought him home. Even while at home, she struggled to get care for Bill through Medicaid’s waiver system.

“I lost my husband and I lost my best friend,” Phyllis said. “All because they didn’t provide.”

For decades, elderly people who could no longer care for themselves have had few options except for long-term care facilities. For most, Medicaid picks up much of the tab. Families and community-based services providing care receive little to no government support.

Now, the disproportionate impact of the COVID-19 pandemic in those facilities is prompting calls for reform.

In Indiana, nursing homes account for 52% of COVID-19 deaths, though just 4% of cases, demonstrating the deadliness of the virus for the most vulnerable Hoosiers in congregate living settings.

All but 47 of Indiana’s 534 homes had reported COVID-19 cases as of Dec. 13, according to data submitted by nursing homes to the Centers for Medicare & Medicaid Services.

As vaccines mark the beginning of the end of the pandemic, lawmakers and advocates must decide what the future of long-term care looks like.

“We’ll be working on long-term healthcare reform, moving to a system that focuses on outcomes and quality for Medicaid-eligible elderly citizens,” Holcomb said.

Medicaid payments, he added, could be tied to nursing home quality. Ninety-two of Indiana’s 534 nursing homes have the lowest-possible rating from the federal Centers for Medicare & Medicaid Services.

With 59% of Indiana nursing home residents relying on Medicaid to fund their care and residency, Holcomb also suggested “removing barriers to care” so that they could “choose where they age.”

Most immediately, though, the state should focus on stabilizing the long-term care system during the crisis, according to Zach Cattell, president of the Indiana Health Care Association, which represents for-profit nursing homes.

“Legislators need to focus on making sure that the healthcare system, including long-term care, has what it needs to continue to fight the virus now — funding, supplies, PPE, staffing and testing,” Cattell said.

Some nursing homes make up this funding gap with the more-generous Medicare reimbursements, for short-term nursing home residents, such as those receiving rehabilitation after hip surgery or other hospitalizations.

“That is a whole discussion that’s not a 2021 legislative fix,” Cattell said. “These are really complicated and long-term processes that we’ve been talking about for a long time.”

Lawmakers are being urged to take other measures to address problems in the long-term care industry.

Sarah Waddle, president of the Indiana chapter of AARP, is among those calling for a state home-care program and increased nursing home oversight. The organization advocated more transparency in 2020 when state leaders initially suppressed information related to COVID-19 cases and deaths in nursing homes.

Waddle also advocates strengthening the state’s long-term care ombudsmen program, which investigates complaints and advocates for consumers. A December 2019 audit found the program was severely understaffed. During the pandemic ombudsmen have had limited access to long-term care facilities.

The long-term care industry has lobbied for such measures, and in Indiana on the General Assembly's Organization Day, Republican leadership prioritized liability immunity legislation to help the state’s economy.

The National Consumer Voice for Quality Long-Term Care, an advocacy group, argues against a national version of the liability immunity bill, the Safe to Work act, that they say would protect bad actors.

“(The) proposal is so broad that it would likely bar the vast majority of lawsuits brought by families or residents harmed by substandard care in long-term care facilities,” the group said.

“Removing liability for negligent care would place hundreds of thousands of current and future residents of long-term care facilities at risk of harm and death.”

To give families more choices to care for aging loved ones, Indiana will have to address how it funds long-term care.

“The state makes it extremely hard to take care of someone at home,” Scantland said. “If they’re going to help people at home, they need to create resources.”

This fall, recognizing the risk the elderly are facing in congregate settings, the state created a pilot waiver program for more home-based care. The program had helped more than 300 Hoosiers as of Dec. 7.

The 10 providers in the pilot program don’t cover all 92 counties but offer services such as attendant care, home-delivered meals, home modifications, pest control and respite care, according to the state’s website.

Eric Essley, the president and CEO of LeadingAge Indiana, representing non-profit facilities in Indiana, said he and other industry players viewed at-home services as part of the continuum for elder care.

“There comes a point where home-based care is just not going to be sufficient for many folks, and it’s sort of a bridge,” Essley said.

“We need to make sure people are comfortable (with that decision) to send people to a nursing home,” Essley said.

But for families like the Scantlands, bringing a loved one home is sometimes the only option.

“All they wanted to do was medicate him so he’d sleep all of the time,” Phyllis Scantland said of her husband Bill.

The process was so rushed, Phyllis said, she never attempted to sign up for a Medicaid waiver again.

“It didn’t matter to me; I just wanted him home,” she explained.

The Scantlands divorced in 2018 so Bill could access his Medicaid waiver benefits, a rule Phyllis said changed after she started caring for him. The waiver would cover specific services, such as bath aides, physical therapy and respite care.

Despite their legal status, Phyllis said she never thought of Bill as an “ex-husband.”

“The (Indiana) system doesn’t make allowances for people who have to give up everything to care for a person,” Phyllis said.

This story was produced with the support of the Investigative Editing Corps (www.investigativeediting.org).

Editor's note: The original version of this story stated an incorrect number of Hoosiers who have died in nursing homes as a result of the pandemic.